What is the Samsung Galaxy A8?

The Samsung Galaxy A8 is for those folk who want a Samsung phone, but won’t pay Galaxy S9 or S9+ money. It costs £449, which is now a fairly conventional price for a classier kind of mid-range phone.

Every element of the phone is solid or better. However, it’s hard to recommend when rivals in the £350-£500 class are so incredibly strong.

For an extra £20 you can get the larger, more powerful OnePlus 6. The Honor 10 is also more advanced and powerful, yet £50 cheaper. And despite costing a whopping £100 less than the Galaxy A8, the Nokia 7 Plus takes better night photos.

Set on a Samsung? Then go for it. However, it isn’t one of the stronger contenders in its class. That we can make such comments about a phone this calibre testament to how accomplished mid-range phones are these days.

The Samsung Galaxy A8 is made of glass, like many 2018 mid-range phones. Its rear is curved, which makes it feel good in the hand, but the front is mostly flat. You don’t get the dramatic curve of the Galaxy S9.

Naturally, Samsung has to ensure the Galaxy A8 doesn’t upstage the S9. As such, it has a more simple finish than some of its rivals. The glass on the rear is therefore plain, rather than sporting a dynamic finish.

The Honor 10 has the most dramatic finish of all at this price. Its “3D” blue look reacts to light as the phone is moved. Even the Moto G6 Plus uses a sub-glass layer that casts S-shaped streaks along the back at the right angle. 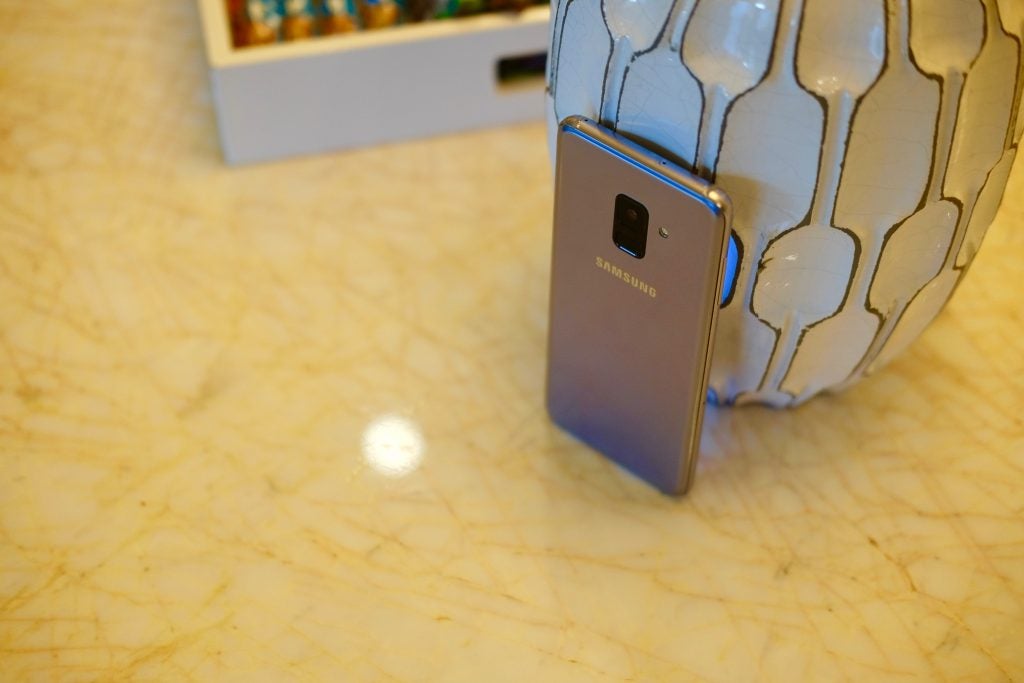 The Samsung Galaxy A8 is comparatively plain, then, but I think there’s an audience for this. It’s available in grey, gold and blue, if plain black is a little too conservative for you.

This device is certainly well made. Like most other glass phones, a filling of aluminium joins the two glass plates. Its colour matches that of the rear. Samsung has kept things simple and tasteful, a strategy also seen in the Galaxy S9.

The Galaxy A8 is just a fraction wider – roughly 2mm – than the Galaxy S9. It isn’t for people who want the biggest screen, for movies and games. As such, it’s more a rival to the Honor 10 than OnePlus 6. 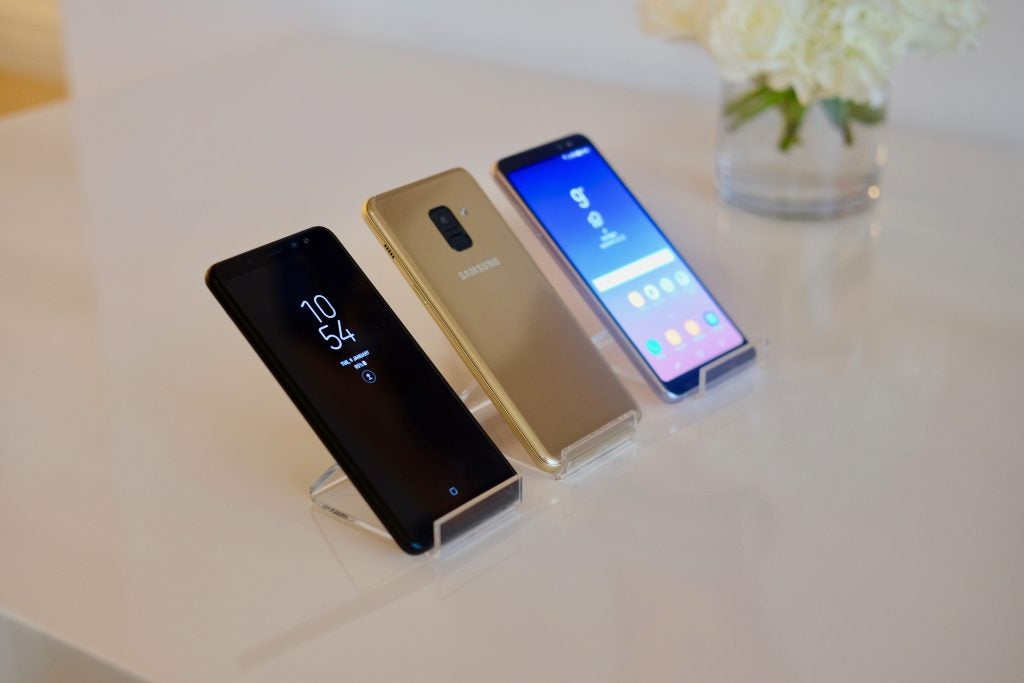 As we’ll see later, the Samsung doesn’t pack as much tech as those phones either. However, it does have IP68 water-resistance. None of the Moto G6 phones, or the other rivals at this price, have such high-grade water protection.

You can drop the Galaxy A8 in water to a depth of 1.5 metres, and leave it there for 30 minutes, without it causing damage. While this feature isn’t doesn’t particularly sit high on my list of priorities when most phones are designed to handle rain, if you lead quite an outdoorsy life, than it may sway you.

The Samsung Galaxy A8 has just 32GB storage. For £50 less the Honor 10 has 128GB, an almost ridiculous disparity. The OnePlus 6 also has 64GB storage at a comparable price.

Many Samsung phones claw back credibility with their screens, because of their use of OLED panels. Samsung actually makes these panels, and the Galaxy A8 includes just such a unit.

Their main benefit is colour saturation. If you want supremely deep, bright and rich colour, you can’t really beat the Samsung Galaxy A8 at the price. It looks more vivid than the OLED OnePlus 6.

The issue? It looks at its best when brought closer to the screen saturation you get in, say, a Moto G6 Plus or Honor 10. I find the default Adaptive Display setting too bold. It isn’t accurate, or particularly tasteful. There are other Photo, Movie and Basic modes that tame the colour.

This is among the best screens you’ll find for the money; however, the distinct appeal of OLED has waned a little now that the LCD screens in mid-range phones are so good. 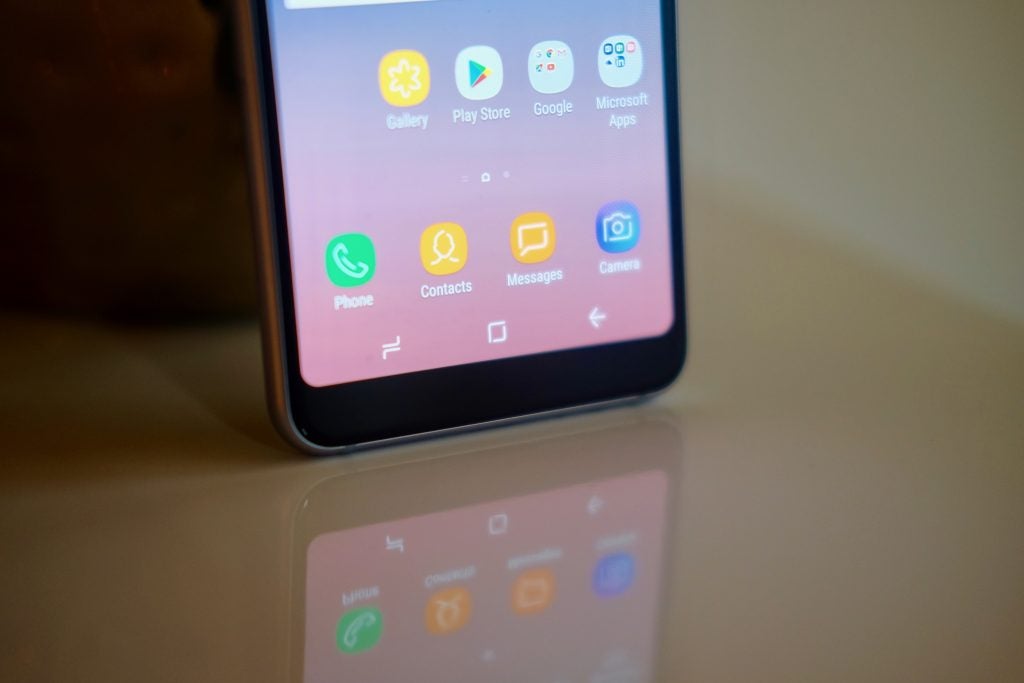 That said, OLED makes the phone’s (near) always-on screen viable. When the Galaxy A8 is in standby, it will display the time, date, battery level and a few notification icons onscreen.

An LCD phone would consume a significant amount of power in such a mode; the Galaxy A8 does not. Since OLEDs have emissive pixels, only the lit parts need to be powered.