Slightly overly plasticky design aside, the Samsung Galaxy A71 is an impressive beast. It's got a big OLED display, solid specs and plenty of versatility in its camera array.

Samsung has started the decade by announcing an absolute load of mid-range smartphones, flooding the market with new models in its A series and Lite versions of some of its most popular flagships. The Samsung Galaxy A71 is one of the most interesting thanks to a number of high-end features.

This is a mid-range phone that is really trying to outmuscle its £420 price and go big. It’s got a large 6.7-inch display, fast 25w charging for a big battery and a 64MP main camera. It’s not the prettiest phone around, but if you’re into watching media on the go and shooting video then you’ll find a lot to like here.

Instead of focussing on making its more affordable phones feel like flagships with pristine finishes and luxurious materials, Samsung has instead decided people want specs. I can completely understand this move and glancing down the feature list you’d be forgiven for thinking the Galaxy A71 would be double the price it actually is. 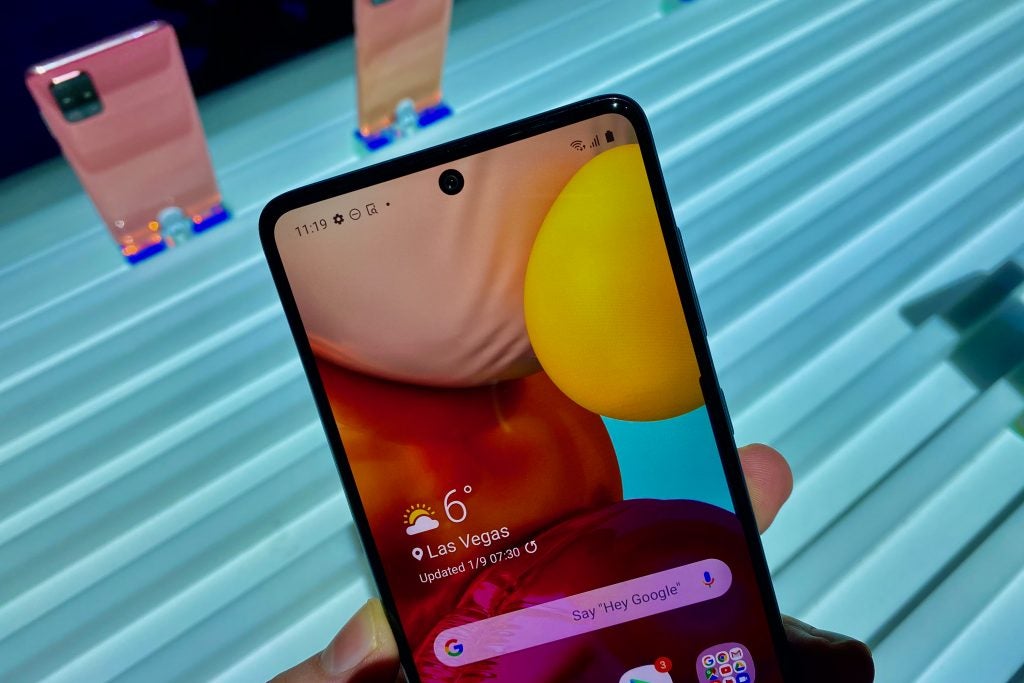 Another move Samsung has made with these Lite and A series phones is the use of big screens – again Samsung clearly thinks this is what people want. Here you’ve got a nice 6.7-inch Super AMOLED panel, with a 2400 x 1080 resolution and Samsung’s Infinity-O look. This means you’ve got a small cutout for the front camera and a thin bezel. There’s even a fingerprint sensor inside the display, something you certainly aren’t guaranteed to get at this price.

Even though it doesn’t have those curved sides like the pricier Galaxy S10 it’s still a nice display with punchy colours, perfect blacks and a good kick of brightness. It’s certainly not as sharp as some other displays but I can’t imagine many fussing over this too much.

If you’ve got smaller hands or just generally don’t want a big phone that constantly requires two hands to grip then I don’t think the Samsung Galaxy A71 is for you – it’s just too large. At least it’s thin and light. It’s also not for those who value a phone that feels really nice. The Galaxy A71 is unashamedly plastic and feels cheap and cheerful as a result. 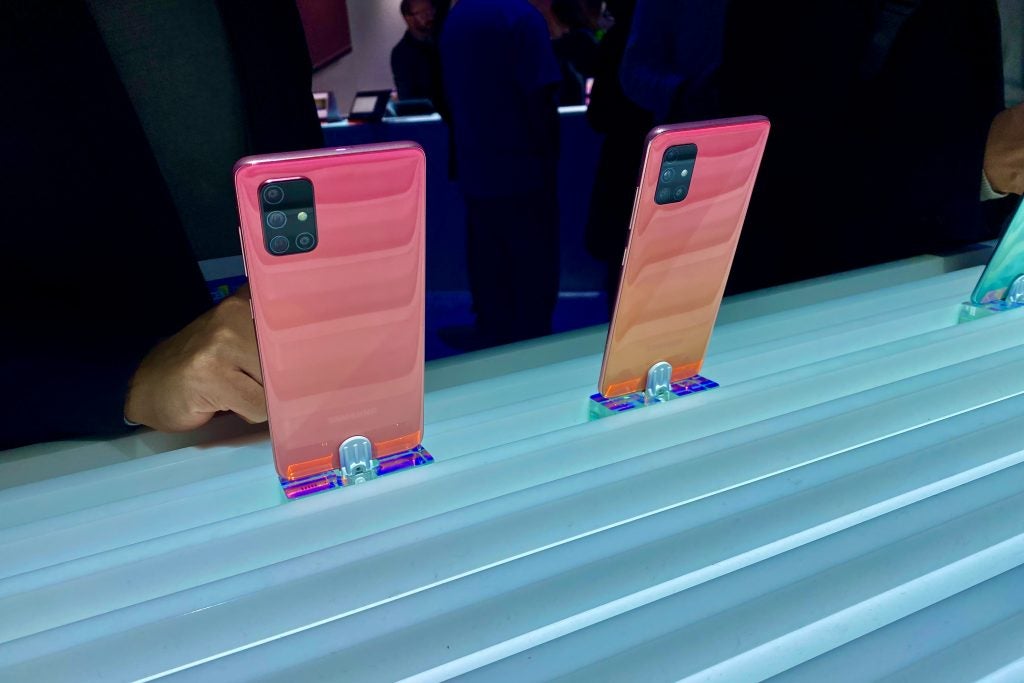 A headphone jack sits on the bottom next to the USB-C port, while the back is covered in a ‘Prism’ pattern that Samsung seems to be using a lot recently.

The back in also home to a redesigned camera cluster which mirrors what a lot of the leaks say that upcoming Samsung Galaxy S20 will look like. There are four cameras tucked inside and this and it offers a good amount of variety.

The main sensor packs 64-megapixels with a wide f/1.8 aperture and that’s paired with a 12-megapixel f/2.2 ultrawide and a couple of interesting extra sensors we haven’t really seen before on Samsung phones. A 5-megapixel dedicated macro camera should help with getting those detailed shots up close and the 5-megapixel depth sensor is there to aid that faux bokeh effect in the portrait mode. While I can’t say how well these cameras actually perform, I would assume the classic saturated look with vibrant colours will make its way across from other models. 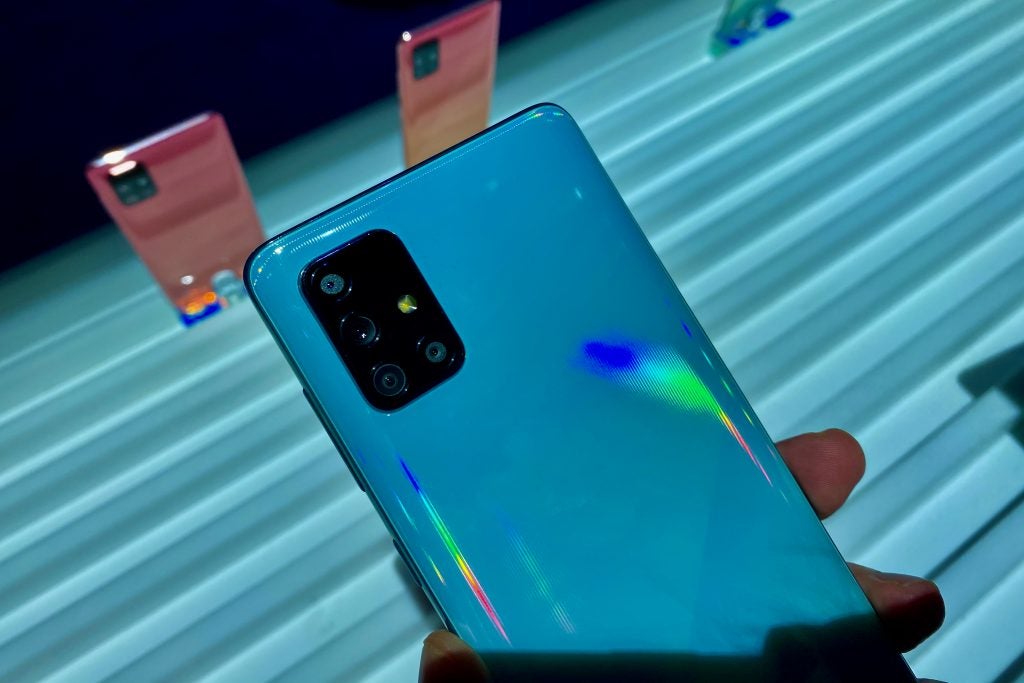 Selfies should look good too as there’s a 32-megapixel sensor nestled inside that cutout on the front. Video can be shot at 4K 30 and 1080p up to 240fps.

The spec sheet continues to impress inside the phone too. There’s a Snapdragon 730 chipset keeping the Samsung Galaxy A71 chugging along, either 6 or 8GB RAM and 128GB of storage that can be expanded via microSD. You’ll also find a 4500mAh battery inside which can be juiced up quickly via a 25w charger. That means the Galaxy A71 actually has faster charging than most models of the S10 series.

Sacrifices have of course had to be made for Samsung to reach this lower price. There’s no wireless charging, no IP rating and Samsung couldn’t confirm whether the display would support HDR content. For me though I can’t see any of those omissions being dealbreakers – especially for the market Samsung is targetting.

Overly plasticky design aside, the Samsung Galaxy A71 is an impressive beast. It’s got a big OLED display, solid specs and plenty of versatility in its camera array.