A solid phone for the basics, but rival devices offer more for your money.

What is the Samsung Galaxy A6?

Where the pricier Samsung Galaxy A8 feels much like a cheaper S9, the Galaxy A6 is quite different, with its metal, rather than glass, rear. Out of fashion it may be, but aluminium still feels good.

Unfortunately, the Galaxy A6 is beaten by other phones at the price. Slow charging, a fizzy screen and dated camera processing mean it isn’t a match for the cheaper Moto G6. 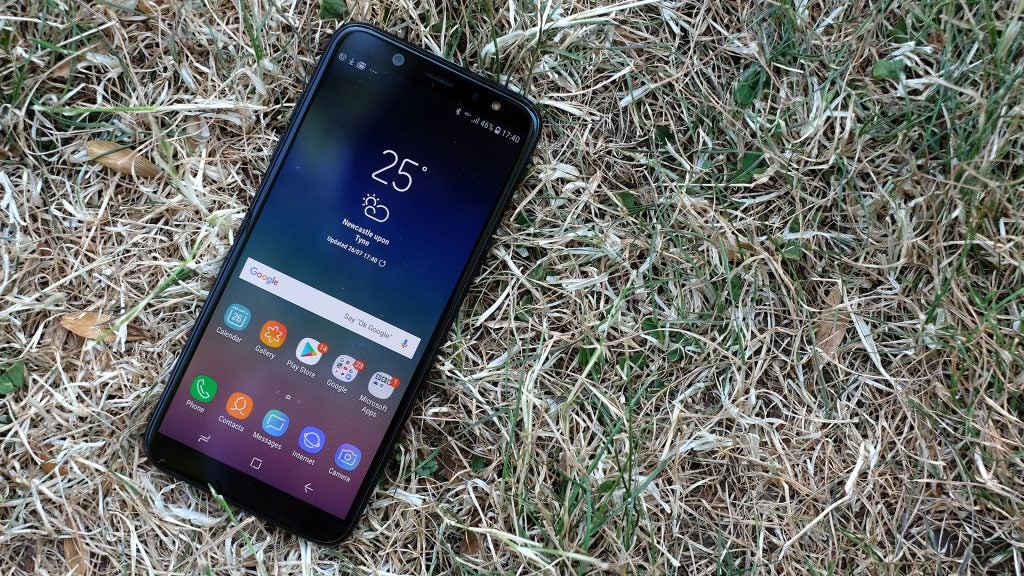 I’m not quite sure when the memo was drafted, but almost all phones above entry-level have metal and glass bodies. Phones such as the Motorola Moto G6 and Honor 9 Lite even bring this design to £220 models and those below.

The Samsung Galaxy A6 doesn’t have a glass back, however. It’s glass on the front, and the rest is, for the most part, a single piece of aluminium. As such, it’s similar to an iPhone 7 or an iPhone 8, with a slightly funkier cut-out for the antennas on the rear.

It’s a people-pleasing size too. The Samsung Galaxy A6 is 7.7mm thick and a couple of millimetres wider than an iPhone 7. But it has a much larger screen, too. 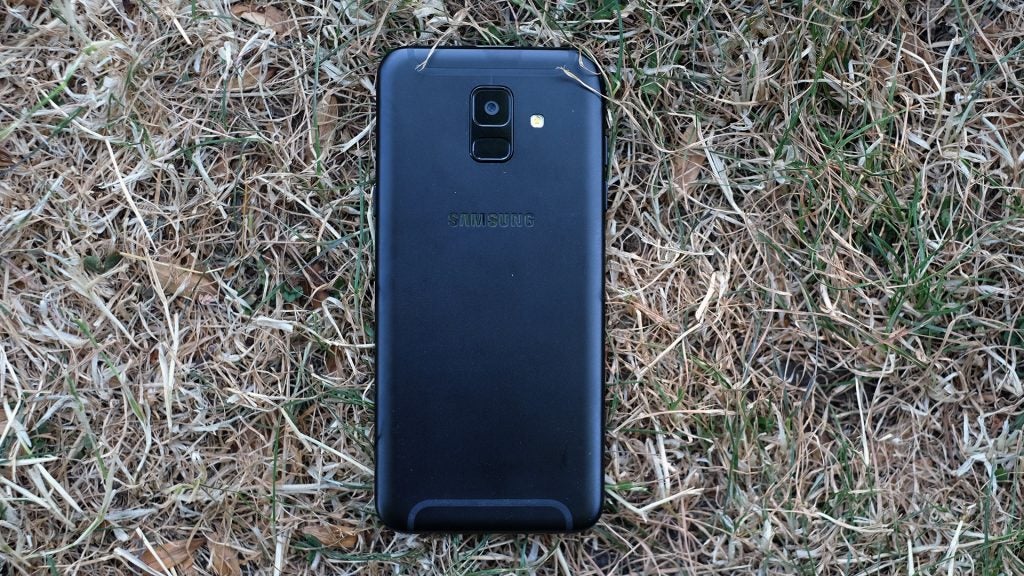 There’s nothing much to dislike here – unless you were hankering after a glass phone, that is.

The Samsung Galaxy A6 has a headphone jack along its bottom edge and fingerprint scanner on its rear. It isn’t a particularly fast scanner, but this will only be noticeable if you’re downgrading from a high-end mobile. It’s possible to use face unlock, too.

There are just a few other signs that this is an affordable phone. It has a micro-USB charge socket rather than USB-C, plus the buttons on the handset’s sides are plastic, not metal.

The Samsung Galaxy A6’s build doesn’t seem higher-end than a Moto G6 or Honor 9 Lite, but it’s easy on the eye in a plain way, and not too large. 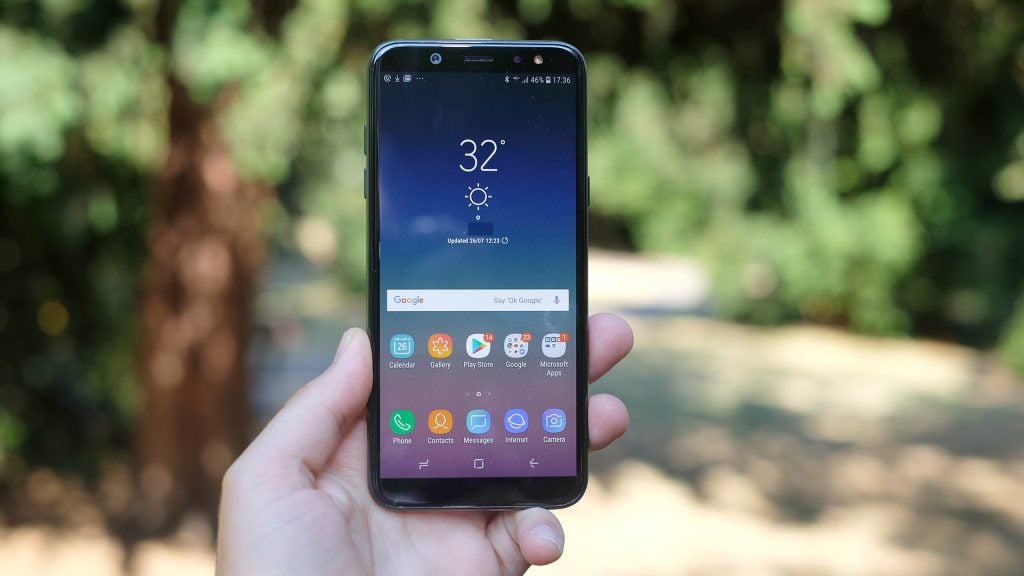 Turn on the Samsung Galaxy A6, however, and one of the primary budget-cutting features becomes clear. This phone has a 1480 x 720 pixel screen, which is a taller version of what we saw in the Galaxy A3 last year.

The display is significantly less sharp than that of the Moto G6 or Honor 9 Lite; its closer to those of the much cheaper Moto G6 Play and Honor 7S. 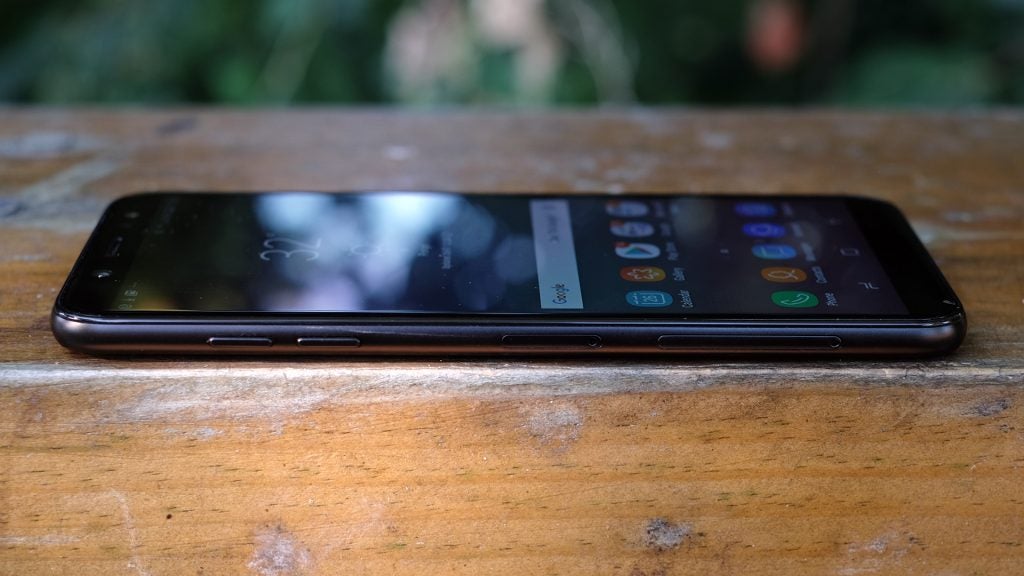 Some of you may not be too put off by this, but every other phone at the price is sharper: Nokia, Motorola, Huawei and Sony all offer 1080p screens. At the time of writing, you can also pick up 2017’s Galaxy A5 at a similar price. It has a traditional 16:9 display, but it’s much sharper.

Low resolution characterises the display’s look, but the other benefits of OLED are present. Contrast is great and, similar to a higher-end Samsung phone, you can choose for colours to be super-bold, natural-looking or somewhere in-between.

Unlike the OLED Nokia 8 Sirocco, if you choose an ultra-saturated profile then it doesn’t make your photos look overbaked when you check them out in the Gallery app.

At an angle, the Samsung Galaxy A6’s screen whites take on a slightly blue tint, more so than Samsung’s flagship phones. But, to some extent, you’ll see this effect in all OLED phones. 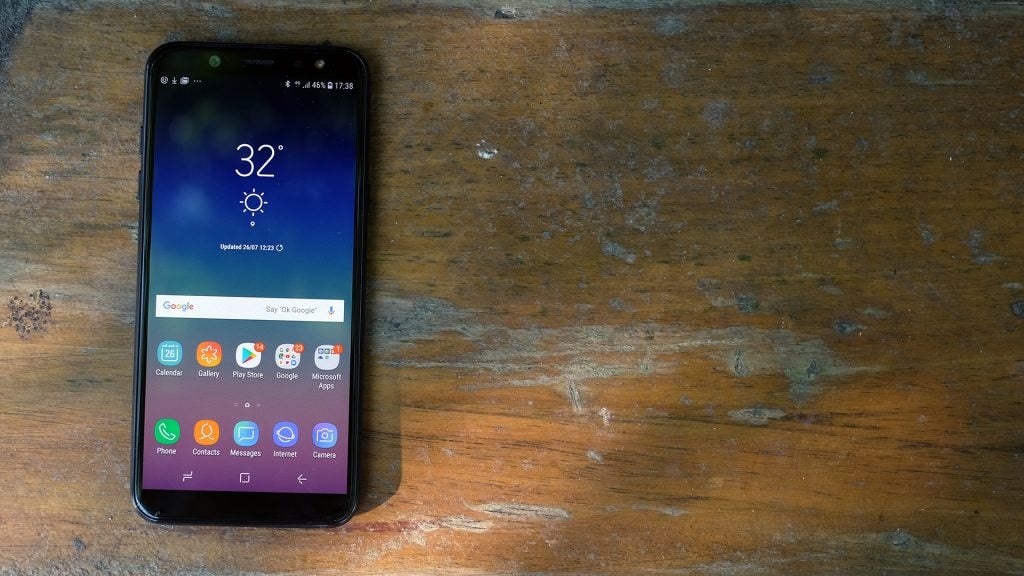 The Samsung Galaxy A6 runs Android 8.0, with the familiar Samsung UI on top. As such, it looks just like the software in a Galaxy S9.

That’s a good thing, for the most part. The Samsung Experience UI is visually coherent and while there are some pretty distinctive elements, such as the “sci-fi rune” soft keys, nothing is too off-putting.

Some parts feel quicker than standard Android, too. Flick up or down on the homescreen, for example, and the Samsung Galaxy A6 zips between the app drawer and homescreens as quick as your thumb will allow.

The app drawer uses pages rather than a scroll and, as is the case with the Huawei phone, you can get rid of the apps area altogether if you like. 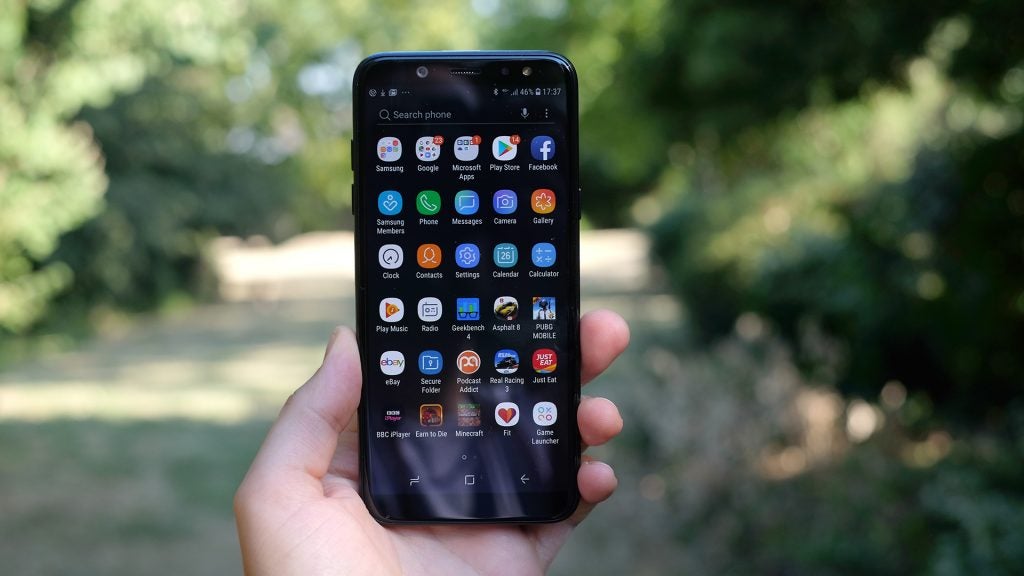 The Samsung Galaxy A6 feels responsive, in a completely different league to the Honor 7C. However, it isn’t distinctly better than the light UI used by the Moto G6 family.

Typical of Samsung, there are some more polarising extras too. Bixby Home is an extra homescreen, packed full of Post-it-style info cribbed from the internet and apps installed on the phone.

Like other elements of Bixby, which is Samsung’s digital assistant alternative to an iPhone’s Siri or Google’s own digital assistant, it comes across a slightly desperate way to crowbar-in features for the sake of it.

However, Samsung has put more work into its software than just about any other phone company. The Samsung Galaxy A6 has a bunch of extra Samsung apps too. 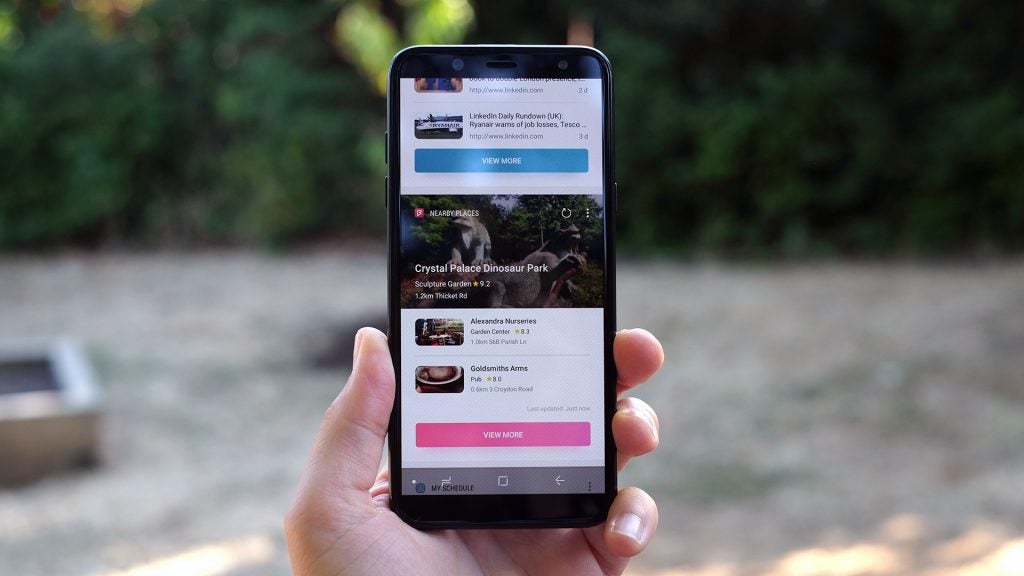 You probably won’t want all of them. SmartThings is great, but only useful if you have compatible smart home gear. Samsung Notes is a handy little note-taker app, and Samsung Fit is a good way to track your step count and runs.

Microsoft Office comes preinstalled, too, as it does with higher-end Samsung phones.