The Samsung Galaxy A51 is a good, solid mid-range effort. There are no major flaws, but the processor and battery weren't quite as good as we'd been expecting.

The Samsung Galaxy A51 is a mid-range handset from Samsung, priced at £329, which runs on the own-brand Exynos 9611 chipset and offers four rear cameras.

It’s in the same price bracket as some strong contenders including the Google Pixel 3a, so we’re hoping for a similarly impressive performance.

Design – Eye-catching and attractive, with a headphone jack

The first thing I noticed when I picked up this device for the first time is how light it is; weighing only 172g, it’s significantly less bulky than other phones of its generation, which typically clock in at around 200g. There are thin but noticeable bezels running around the screen, which is itself home to a small cutout for the selfie camera. 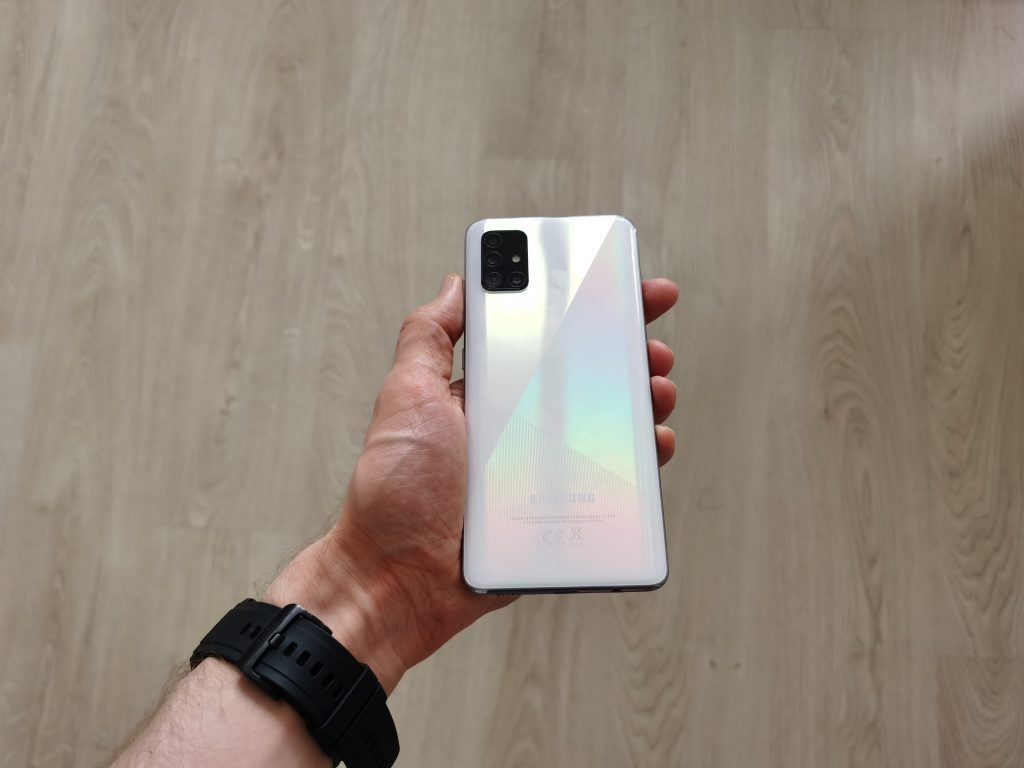 Turning it over, its rear panel also draws attention thanks to a dazzling white pearlescent finish that’s divided into geometric shapes to catch the light. The camera module in the top left is a rounded rectangle that houses four sensors plus a flash.

I’m pleased to see that the 3.5mm headphone jack remains (at a time where it’s now gone missing from both of Samsung’s flagships ranges), and the SIM tray holds two SIM cards plus a Micro SD card slot to expand the phone’s existing 128GB storage capacity.

Overall, this is an attractive, eye-catching design that’s also got all the extra functionality you’d want.

Display – An AMOLED that’s a joy to look at

The Galaxy A51 has a 6.5-inch AMOLED screen with a 1080 x 2400p resolution. It’s a good display, that being evident even upon the first start-up when its default animated wallpaper showed off a range of colours and textures to demonstrate its capabilities. On top of that, it’s always an advantage to have the much-improved contrast offered by OLED screens over their LCD counterparts. 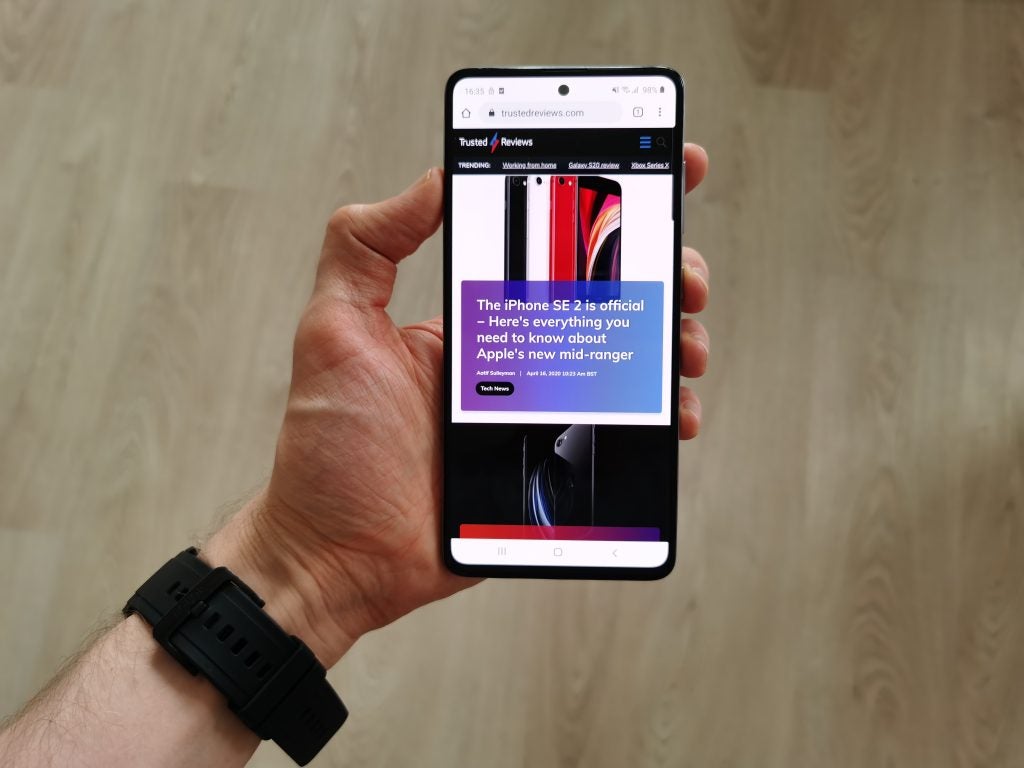 It’s enjoyable to watch videos, browse photos or simply flick through a social media feed on this device; and what’s more, I didn’t find the notch to be intrusive as it’s tucked away at the top in the centre of the screen.

Performance – A mixed bag, but some disappointing numbers

The Samsung Galaxy A51 runs on an Exynos 9611 chipset, which is manufactured by Samsung itself and is built with 10nm architecture.

We ran it through a few benchmark tests seen in the table below (where Geekbench measures CPU performance, while 3D Mark measures the GPU).

As you can see, the CPU performance is significantly overshadowed by the Motorola One Hyper, which has a starting price that’s lower by £60. That’s undoubtedly a disappointment, and I would have expected better scores in these respects.

In day-to-day usage, I did notice some juddering animations when several apps were running at the same time as if the device was feeling some strain; however in my experience, games actually ran very smoothly with no noticeable lag, so in general, it was somewhat of a mixed bag.

Overall I think that you might want to feel more assured in the processing power of your phone if you’re paying a sizeable sum for a mid-range phone, especially if you want it to last you for the long-term.

The Galaxy A51 has a 4000mAh battery, and this is a good size which is comparable to flagships even within Samsung’s own stable, including the Samsung Galaxy S20 itself.

However, I found that this specification flattered to deceive; I would have expected a longer-lasting performance, but instead, it left me wanting more. This perhaps points to the chipset being more inefficient than that of its rivals.

To take an example, after streaming a YouTube video for one hour, I found that the battery had drained by 6% from full. While that’s not dramatically poor, it’s not as good as some of its competitors. Over the day generally, I found the battery life to be running out sooner than I’d anticipated, and given this generous capacity, this might be down to an inefficient chip.

When it comes to topping up again, fortunately, you’ve got 15W fast-charging, which is nice and nippy, and it’s undoubtedly helpful to fall back on this if the battery doesn’t quite last as long as you’d hope. 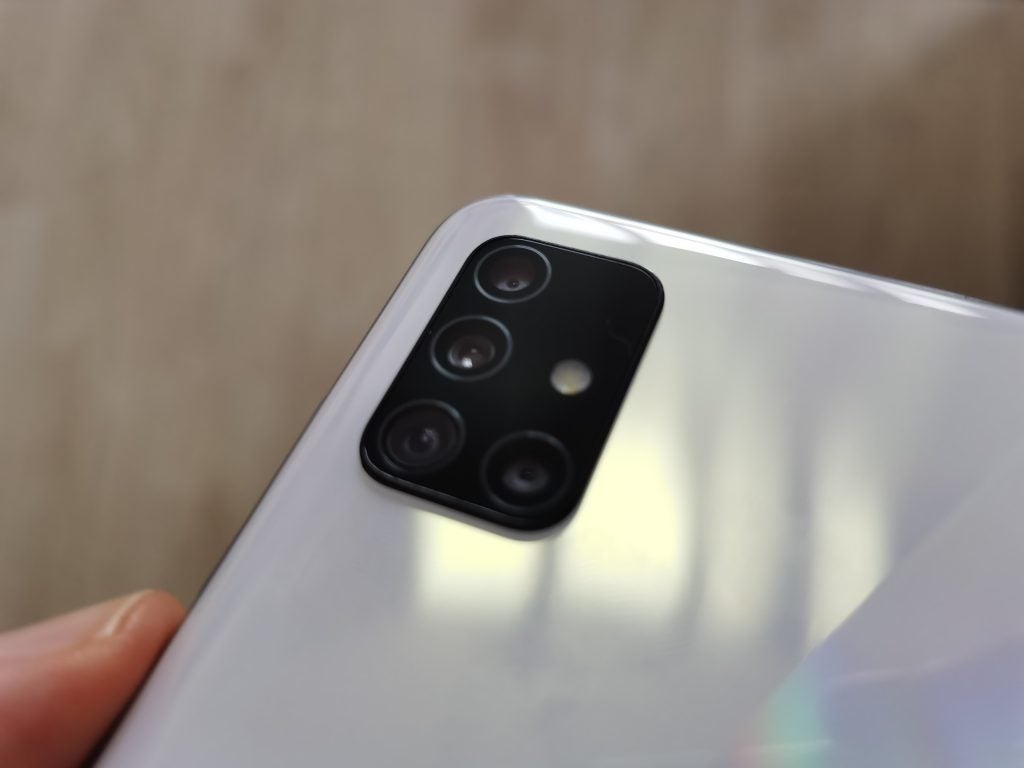 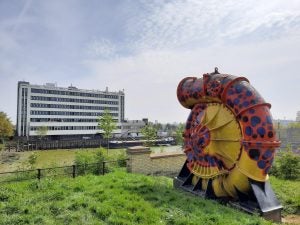 The primary sensor delivers good, detailed shots. In the image above, you can easily pick out finer details such as rust in the foreground, while the apartment building is also clearly defined. Colours are strong but not over-enhanced (which had previously been a failing on some Samsung snappers) 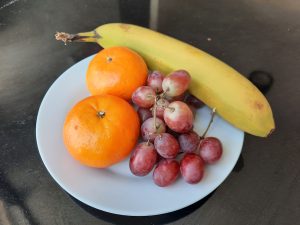 With a closer shot, again the detail is a strong point; the stalks of the grapes are sharply defined, for instance, although the focus isn’t uniform on the subject. 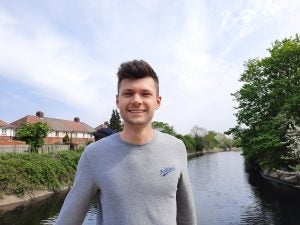 Portrait pictures also look good on this camera, as seen above, and the device’s software quickly detects faces. 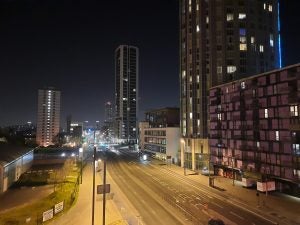 Under low-light conditions, results are decent but not brilliant. Noticeable levels of detail are lost, but as in the above image, you can see into a cluster of bright lights in the mid-distance without the highlights completely overwhelming and unbalancing the picture. 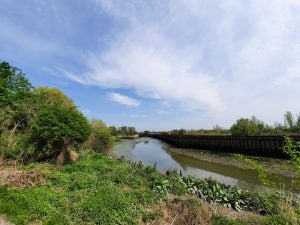 The ultrawide lens gives you another option to shoot with, and it certainly does increase the field of view significantly; however with this comes significant distortion around the edges (for example the stems in the right side of the above image, which appear stretched). 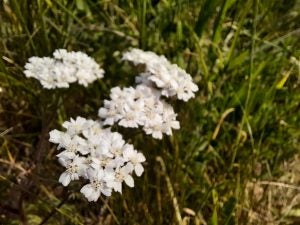 The macro camera offers you another option if you’re shooting just 3-5cm away from the target; the snap above shows the flowers in the foreground in sharp focus, and it’s for miniature objects such as this where it comes into its own.

It’s not the very best you could get at this price – remember there’s always the Google Pixel 3a, though it has fewer sensors – but it should serve you well for the most part. The most disappointing aspect is probably the distortion in the ultrawide lens.

Should you buy the Samsung Galaxy A51?

The Galaxy A51 is a phone that’s worth considering, given its decent all-round performance; its camera versatility is impressive, the screen is enjoyable to watch content on, and it looks good too, which doesn’t hurt. But if you take a look around, you’ll find devices with better processors and better cameras for the same price, so you might want to look elsewhere if those are your top priorities.

This is a respectable mid-ranger, which is good at the first things you’d look out for: camera, screen, and design are all positive points for this device. But if you scratch a little deeper, you might be a little underwhelmed by battery life and the processing capabilities.