The Samsung Galaxy A50 dazzles and glimmers and promises the semblance of a top-end smartphone experience for less money. It looks fantastic and the main camera rattles off stills quickly. But without knowing how much the Galaxy A50 will cost, it’s hard to call an early verdict at this stage.

Samsung announced a pair of new mid-range phones at MWC 2019, the Samsung Galaxy A50 and Galaxy A30.

This, the Samsung Galaxy A50 is the bigger and more powerful of the pair, boasting a main camera with three lenses, and in-display fingerprint scanner, 15W fast charging and a big 6.4-inch Super AMOLED screen. It looks gorgeous too, and promises to offer a modicum of high-end smartphone experience for a smaller price.

The Samsung Galaxy A50 is now available, and you can buy it unlocked, SIM-free from Samsung’s official website for £309. It’s also available on contract from £19.99 a month from Carphone warehouse, 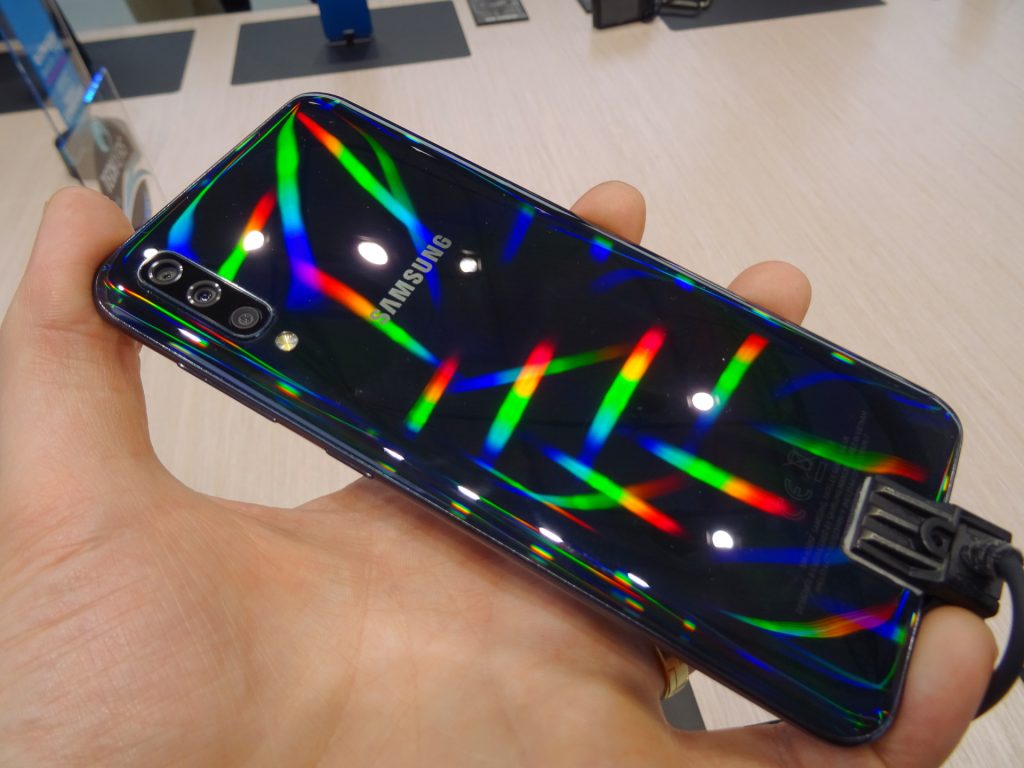 Samsung Galaxy A50 specifications and features

The Samsung Galaxy A50 cops a lot of the headline-grabbing features from the flagship Galaxy S10 phone. Three cameras? Check. In-display fingerprint sensor? Check. Infinity display (translation: really skinny bezels)? Also check. No 5G though (but did you really expect it to be a 5G phone?).

When I played around with the phone, I was able to push all the way up to 4x magnification and take some sharp stills of the booth surrounding me, but I wasn’t able to successfully move any files away via Bluetooth for posterity. The Galaxy A50 model may not have been running the final software that it’ll ship with, but it was certainly quick to focus and to take pictures. 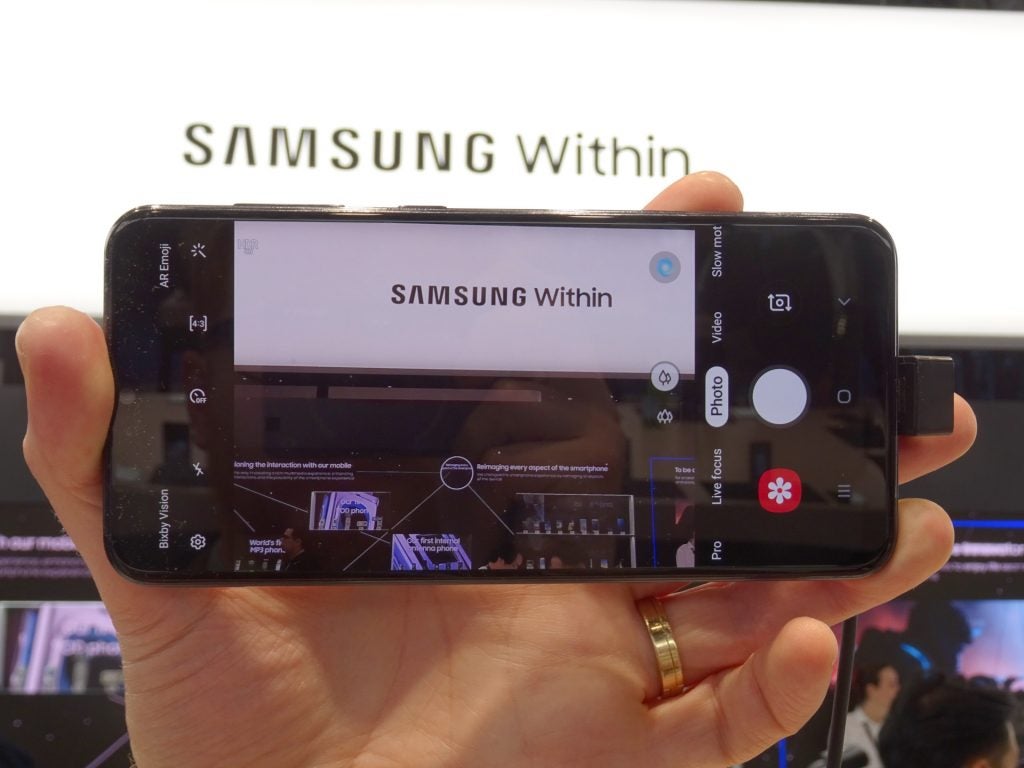 I didn’t really have much of a chance to try out the in-display scanner at the booth, as I had limited time which I couldn’t spend scanning in my fingerprints.

As for the display, it’s pretty fantastic. It looks pin sharp – I couldn’t spot any pixels – and the Galaxy A50’s brightness was strong enough to punch through the oppressive overhead glare of the booth’s spotlights. 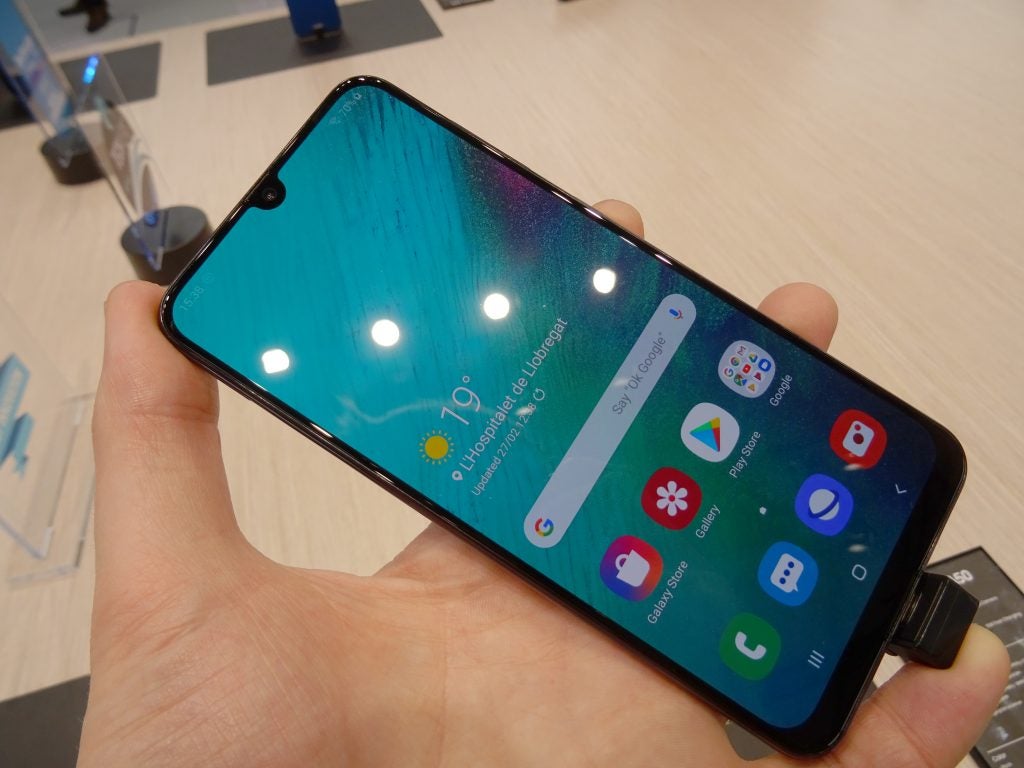 The Galaxy A50’s display held up well in the over-bright Samsung booth.

This suggests that outdoor visibility will be good. The shiny coating however means that it’s going to suffer from glare.

The Samsung Galaxy A50 will be available in four colour options; black, white, coral, and blue. All the models I saw on the stand had blue edges and the same iridescent metallic finish on the back. 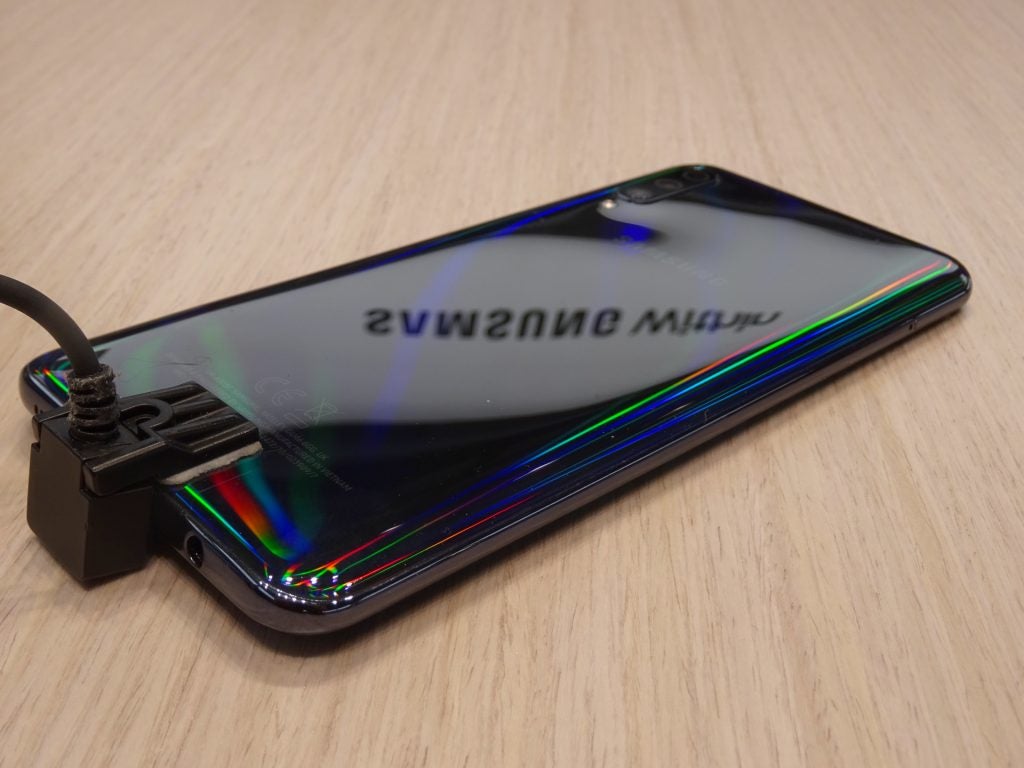 Despite its glossy back, Samsung Galaxy A50 doesn’t seem to exhibit fingerprint marks as obviously as similarly finished phones

The back coating is actually pretty striking. While there are plenty of shiny metal phones out there with polished finishes, the Samsung Galaxy A50 gleams with a prism-like effect, giving the Galaxy A50 a retro 70s disco vibe. This is possibly unintentional. Either way, the colourful rainbow reflections are a nice touch.

Other features you get with the Samsung Galaxy A50 are things like Samsung Pay, as well as Bixby Voice – Samsung’s Siri and Alexa wannabe voice assistant – and Bixby Vision, which lets you do things like translate menus with the camera.

The Samsung Galaxy A50 both looks and feels very premium. Without knowing how much either the 4GB + 64GB or 6GB + 128GB versions are going to cost – or even when/if they’ll come to the UK – it’s currently hard to call an early verdict on this. If the price is right, this could sell bucketloads, if it’s too much, it’ll be another forgotten mid-range phone.

Should I buy the Samsung Galaxy A50?

We haven’t received a review sample of the Samsung Galaxy A50, so we can only give you our first impressions of the handset. If you’re interested in a mid-range phone, then we have plenty of samples that we have reviewed and can recommend. For around the same price as the Galaxy A50, the Huawei P30 Lite should attract your attention, with lots of storage and a good main camera. There’s also the Pocophone F1, which has some strange omissions and the odd quirk or two, but it’s a lot of phone for the money and super powerful.