Introduction
The Samsung EX2F is a 12.4MP advanced compact  camera that succeeds the two-year-old Samsung EX1 as the company’s new flagship compact. As such it’s most likely to appeal to those photographers looking for something smaller and more practical than a DSLR, but that also offers the kind of advanced shooting features and manual control they are used to. 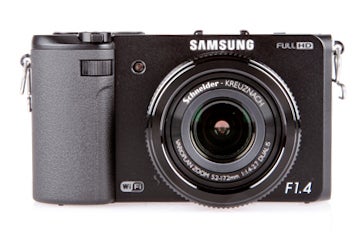 These days, the advanced compact segment is very much a buyers’ market, with plenty of very good options to tempt prospective buyers. And of course, as well as advanced compacts there’s now a generous selection of Compact System Cameras, many of which are only slightly larger than a regular advanced compact.

Because of this, advanced compact manufacturers have had to up their game in order to compete with the new breed of small and highly functional CSCs, which in turn can only be good for the consumer. The Samsung EX2F is one such camera and comes with a generous specification that is likely to tempt both those looking for a back-up to their DSLR, as well as those looking for a ‘carry everywhere’ advanced compact.

Samsung EX2F Features
The Samsung EX2F takes much from its predecessor – the EX1 – but also adds a number of improvements. Whereas most regular compacts use a small 1/2.3-inch sensor the EX2F (and many other advanced compacts besides) employs a slightly larger 1/1.7-inch CMOS sensor. This offers an effective resolution of 12.4-megapixels, which represents a fairly sizeable jump up from the 10-megapixels offered by the EX1. The sensor is backside wired too, which basically means the electrical wiring is located on the underside of the sensor rather than the side that’s exposed to light. This arrangement allows more light though to the individual photo diodes, which in turn boosts the sensor’s performance in low light conditions. 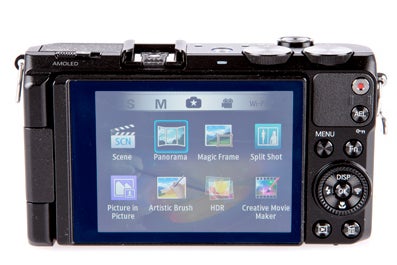 In terms of sensitivity the Samsung EX2F comes with a standard ISO range of 100 to 6400, which can be further expanded to ISO 12800 although this expanded setting does come at the price of a lower maximum resolution. In addition to capturing standard JPEG images, the EX2F is also capable of shooting lossless Raw files. This will doubtlessly please advanced photographers who prefer to do their own imaging process in a digital darkroom software as the additional information contained in Raw images files offers much greater flexibility.

The fast maximum f/1.8-f/2.4 aperture of the EX1’s 4x optical zoom was something that impressed us when we tested that model in 2011. With the EX2F, however, Samsung has managed to go one better by increasing the speed by one stop to f/1.4, although the new model’s zoom power is slightly reigned in at 3.3x. Still, at 24mm the Schneider-KREUZNACH lens should be plenty wide enough for wide-angle enthusiasts, while any fears about the effects of camera shake at its maximum 80mm telephoto extension should be taken care of by the presence of Dual IS image stabilisation technology. On top of all this, the Samsung EX2F also gets a built-in ND filter that allows you to use slower shutter speeds in bright light.

The Samsung EX2F retains the same 3-inch, 614k-dot resolution AMOLED display that was found on the EX1. It’s an impressive screen with the AMOLED technology producing more vivid blacks and more accurate colours than many competitor models. As with the EX1 the EX2F’s screen is articulated to, with a side hinge allowing the screen to be pulled away from the back of the camera by around 180 degrees from where it can be rotated by about 270 degrees to allow for extra flexibility when shooting from overhead, ground level or even around corners. 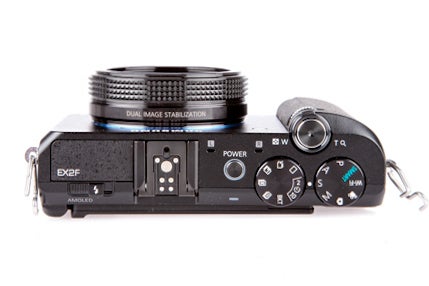 Whereas the Samsung EX1 only offered 640 x 480 VGA standard definition movie capture, the EX2F is right up to speed with its rivals with a top movie setting of 1920 x 1080p Full HD capture at 30fps. On the side of the new model you’ll also find a ‘HDMI out’ port that enables you to connect the camera directly to a HDTV.

In the past year or so Samsung has been pushing the boundaries of built-in Wi-Fi functionality with compact models such as the Samsung SH100, Samsung MV800 and, more recently, the Samsung NX20 compact system camera. The EX2F is the latest model to benefit from this useful feature and allows you to upload your images directly to a range of social networks such as Facebook and Twitter, or to email your images straight from the camera anywhere you’re able to access a Wi-Fi connection. Another benefit of the built-in Wi-Fi connectivity is that it allows you to back your images up to cloud-based storage services such as Microsoft’s SkyDrive and Samsung’s own AllShare Play. And if you really want to get clever then the built-in Wi-Fi functionality also enables you to use a compatible smartphone as a viewfinder although you’ll need to install a free app on your phone first. 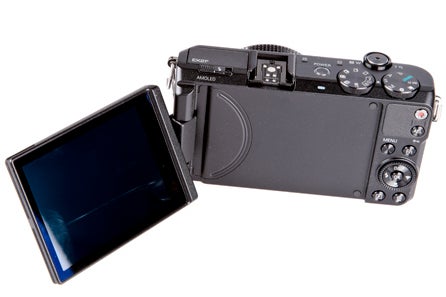 Samsung EX2F Design
The Samsung EX2F is constructed from what Samsung claims is ‘high-intensity’ magnesium alloy. In the hand it certainly feels solid enough with a reassuring weight to it too. The body is rectangular in shape and slightly elongated, which gives the articulated LCD screen plenty of room to breathe while still allowing room for a range of buttons to be positioned on the right-hand side of the screen. These buttons include a D-pad that also offers direct access to Wi-Fi, Flash, Macro mode and Display controls. This is encircled by a control wheel that can be used to control or navigate various shooting functions, as well as Menu, Playback, Delete and a Function (Fn) button that can be assigned to a range of duties. 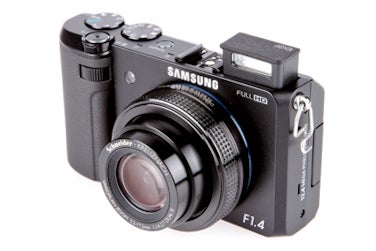 On top of the camera you’ll find not one, but two mode dials side-by-side. The first of these is used to control the camera’s various exposure modes, with the other one controlling the EX2F’s drive mode. Ideally we’d like to have the ability to customise this second dial, so that we could assign it to something like exposure compensation, however the fact that Samsung has seen fit to offer so much direct control over the camera via physical buttons without having to resort to the in-camera menu is certainly welcomed.

On the front of the camera near the top of the rubberised handgrip there’s also another control wheel that can be used to change various settings on the fly while shooting. While this dial is certainly useful for controlling, say, aperture when the camera is being used in Aperture-priority mode it could really do with being a bit stiffer; we found it quite easy to accidentally move it while shooting.

One thing we weren’t quite so convinced by was the grooved ring around the lens. At a first glance you’d be forgiven for thinking that it has some kind of functionality that allows you to control some aspect of the camera with. However, this isn’t actually the case and under closer inspection it’s simply there for protection, unscrewing to reveal an adapter thread underneath. We were also slightly disappointed not to see Samsung’s i-Function technology incorporated on the EX2F as this is something the company has implemented well on many of its higher end cameras and CSCs. These are just minor quibbles though to what is otherwise a very well thought-out and pleasingly designed camera. 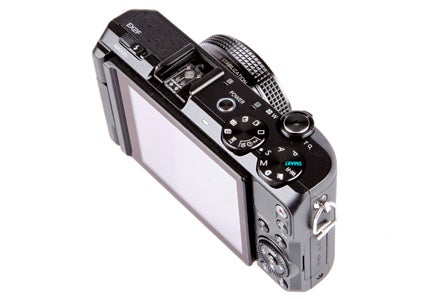 Samsung EX2F Performance
In terms of performance there isn’t much to fault the Samsung EX2F on, and in general it provides a pretty satisfying user experience. There are a couple of minor issues we should mention though. While the EX2F’s start-up time is pretty respectable, shooting speeds are a bit on the slow side – especially when you’re using the camera to shoot Raw images with. If you stick with JPEG capture, then there is little in the way of any noticeable delay between shots. But in Raw or especially Raw JPEG capture, you’ll often find yourself waiting for the buffer to clear until your ready to shoot again. And, as with most digital cameras, while the buffer is clearing the EX2F locks up, meaning you can’t shoot or change any of the settings.

While the EX2F’s image processing from shot to shot isn’t the quickest the AF system is generally pretty good, with fast and accurate performances – especially in good light. In addition, you can also choose to use the camera in manual focus mode should you wish to.

Samsung EX2F Image Quality
Overall image quality is, on the whole, impressive. The Samsung EX2F’s slightly larger than average 1/1.7-inch sensor is able to capture quite a wide dynamic range – at least by compact camera standards – with shadow detail remaining visible without having to sacrifice too much in the way of highlights. As a result of this, images produced by the EX2F have a pleasingly even tonal range and appear natural straight out of the camera. 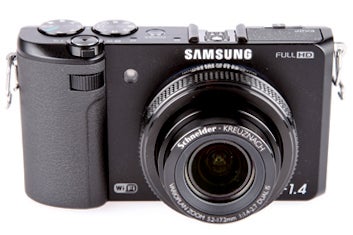 As is usually the case, JPEG files come out sharper than their Raw counterparts, and tend to show more in the way of contrast too. On the flipside, Raw files preserve more in the way of fine detail due to the lack of processing, although they can of course be sharpened to your own tastes at the post processing stage. Raw files also tend to suffer more from fringing. Again, this is something that can be rectified in a digital darkroom.

ISO performance is one area where the EX2F impresses. As might be expected, when used at its lower sensitivity settings the EX2F produces crisp, noise free images. However, used at higher settings the camera is still able to produce usable results right up to ISO 3200.

Samsung EX2F Verdict
The Samsung EX2F is a richly featured advanced compact that builds on the strengths of its predecessor to produce an impressive little camera. From the super-fast f/1.4 lens to Raw capture, and from the impressive AMOLED screen to the camera’s built-in Wi-Fi functionality the EX2F is just about everything an advanced compact should be. In truth we only really have a couple of minor complaints; the image processing is a bit slow and can hold you back, and there are a couple of questionable button placements but these are only minor faults really. Overall, the Samsung EX2F is a great little advanced compact that fully deserves your consideration alongside the traditional heavyweights of the market. 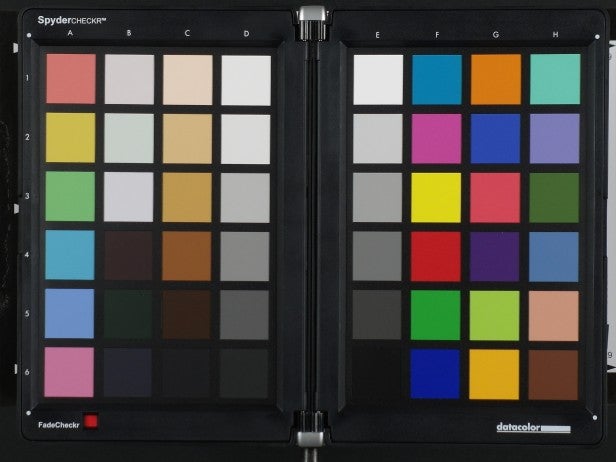 The full ISO colour test chart – shot here at ISO 100. Below are 100% crops taken from the same composition at ascending ISO settings. 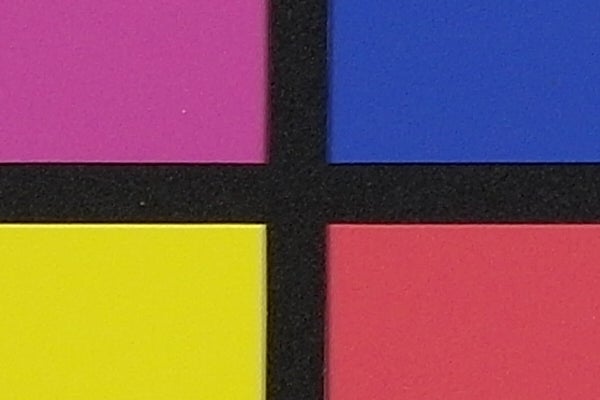 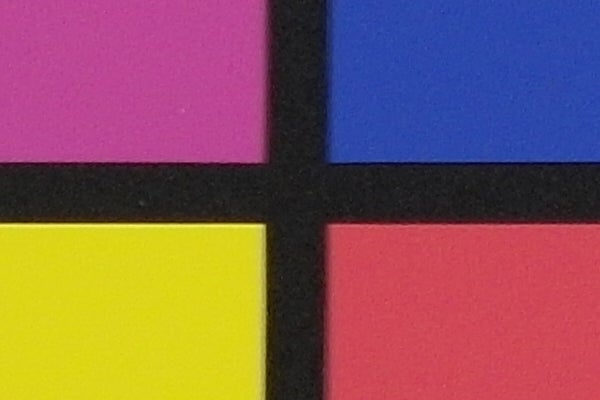 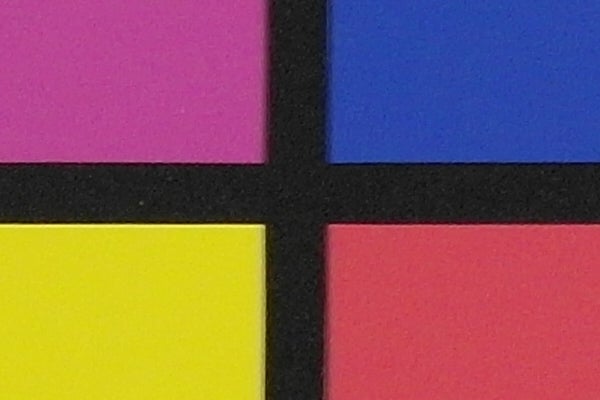 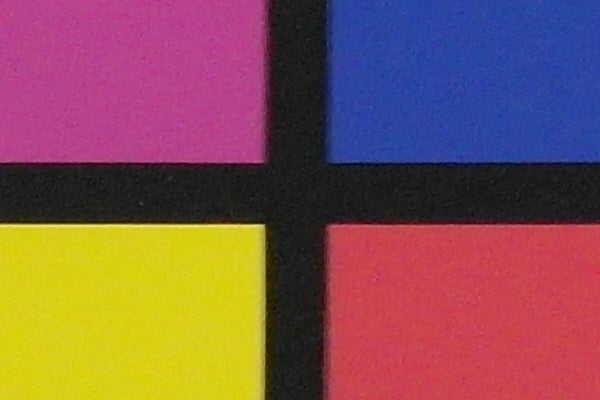 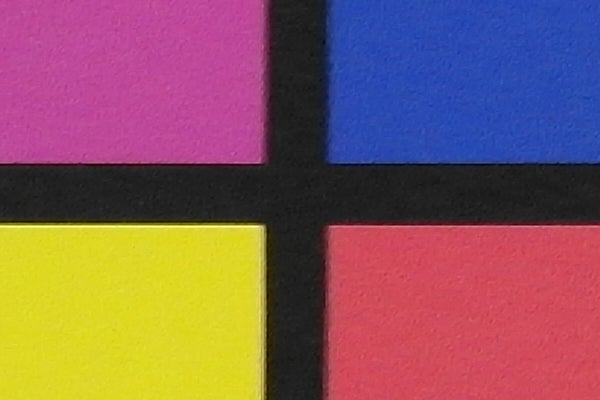 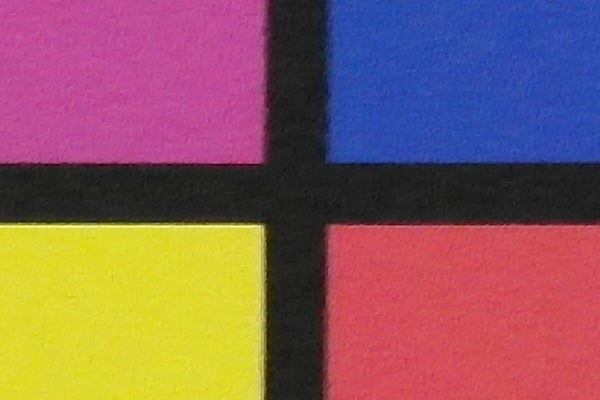 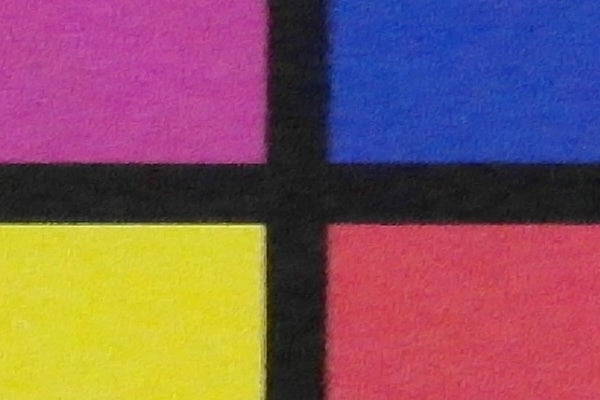 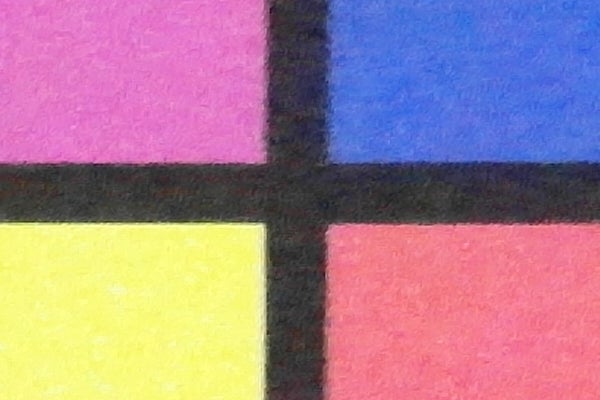 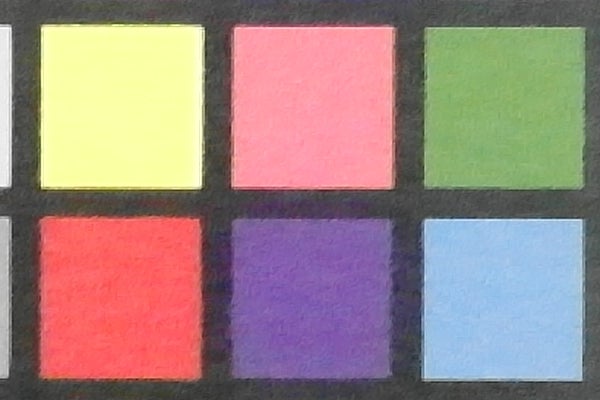 ISO 12,800 (this expanded setting comes at the price of lower maximum resolution) 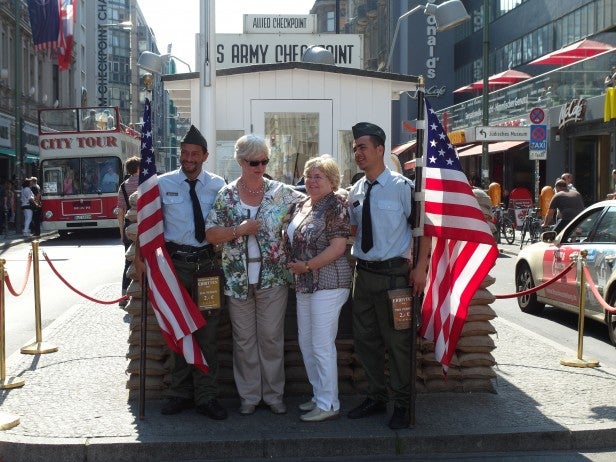 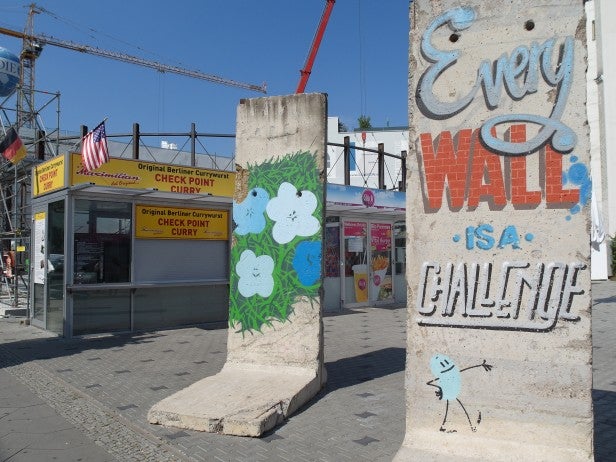 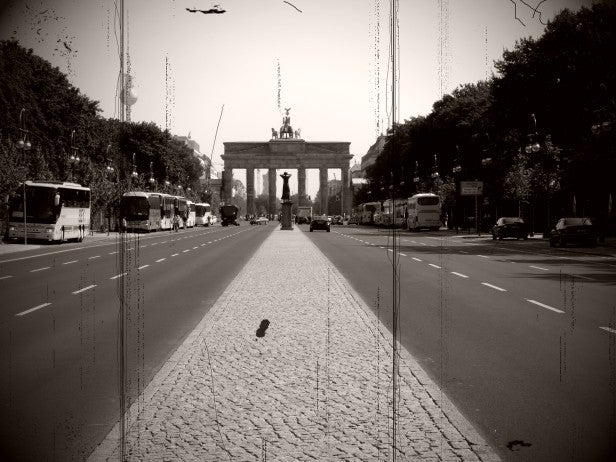 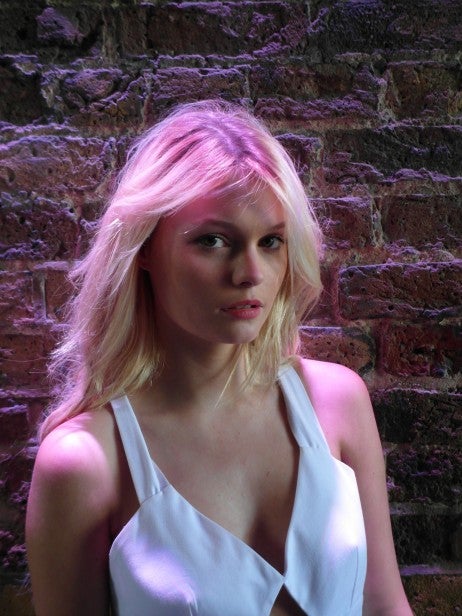 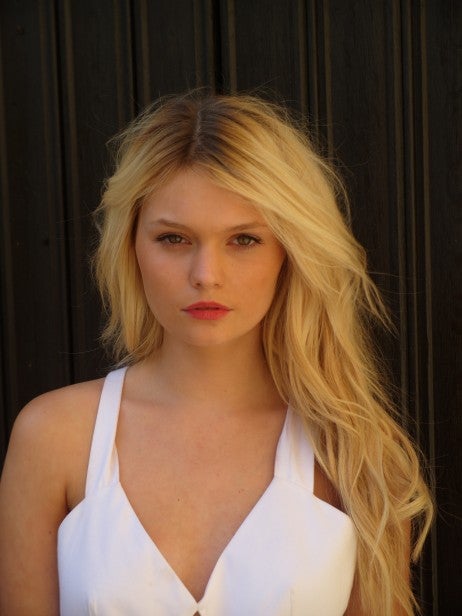