The last Samsung handset I looked at was the 8-megapixel toting Pixon. This latest Samsung mobile doesn’t boast such a fancy camera, but it is still somewhat different from the norm, being Samsung’s second stab at an Emporio Armani branded mobile.


It isn’t often I spend precious words describing packaging, but in this case I want to make an exception. Sitting inside the cardboard box is a zipped case which, in Russian doll style, contains a smaller soft pouch whose two pockets have room for the phone, mains charger and all provided accessories.


Right, then, onto the phone itself. It is not a super expensive handset, being free on contracts starting at £20 on Vodafone. So you shouldn’t expect a huge amount from it in terms of specifications.


This is a music-centric phone with generally middle of the road specifications. Quad-band GSM with HSDPA to 3.6Mbps (and thus not able to take advantage of the full 7.2Mbps on offer from Vodafone), a 3-megapixel camera with side-button, front camera for two-way video-calling, FM radio and music player. 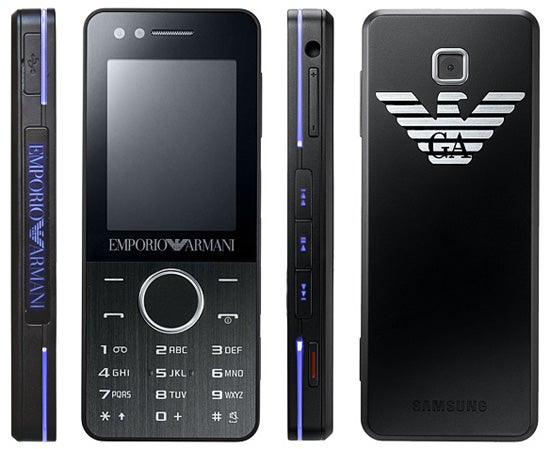 Physically, it is a little tall at 114.9mm, though its width and thickness at 47.4mm and 12mm respectively make it an easy hold. At just 90.2g it is no bother to carry. The slightly rubbery backplate assists with grip. The shininess around the screen is countered by a brushed metal look to the flat number pad.


The number pad is responsive, and the keys are nicely spaced. The navigation button is a bit of a star feature. It is raised from its surround and relatively big. Its silver frame adds a little sparkle to proceedings.


The main screen is a delight to look at. Small at 2.2 inches, it is an active matrix OLED (also known as AMOLED). It’s superbly clear, sharp and bright so I had no complaints.


However, if all that sounds like this is a nicely designed phone, there is one thing that lets the side down terribly. The Emporio Armani branding is far too ‘in your face’. The backplate of the phone has the logo emblazoned at a huge size in silver against a black background. The logo is also on the front between the screen and keyboard, and on the left edge of the phone. Overkill, you might think, but it doesn’t stop there.

There are blue, green, read and black themes for this handset. The theme you choose sets a corresponding colour for the phone’s sidelights. These involve a strip of colour round the top and bottom edges of the phone, illumination of media playback icons on three buttons on the right side of the handset and illumination of that Emporio Armani brand marking on the left side. The lights pulse as you use the phone and you can change the sidelight colour, flicking between green, red and blue.


It is all just too shouty for my liking, and so it is fortunate that you can turn this external lighting off completely.


There is another disappointment when it comes to basic use of this handset. Out of the box there is no shortcut to contacts. On my review sample, which was a Vodafone one, the right softkey was a link to Vodafone Live, the left one to the handset menu. 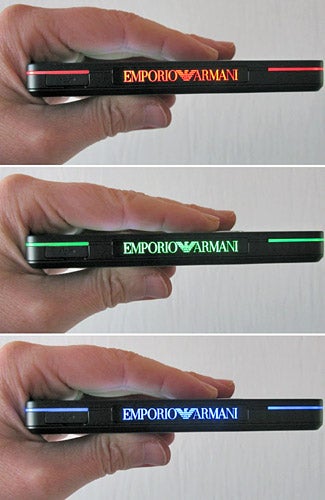 There are five shortcuts on the main screen you cycle through with the navigation button, none of which are allocated to contacts (though one can be used to change the colour of those blasted side-lights). Fortunately, you can change these shortcuts but Samsung has missed a trick by not allocating one to contacts out of the box.


The default menu system offers a carousel interface, forcing you to cycle through each menu item in turn using the navigation button. It all seems to take too long to get to where you want to be and I quickly shifted to a more standard grid view.


The headset arrangement is bizarre. There’s a 3.5mm jack on the right side of the phone and into this you can plug your own headphones or the provided pair. The provided pair are those short-lead types that you plug into the post-microphone section of Samsung’s two-piece headset. However, to use the microphone section you need to plug this into the microUSB connector on the left side of the phone then plug the 3.5mm jacked earbuds into that. Like I said, bizarre.


On the plus side, audio quality is very good, there are playback buttons on the right side so you can control music when you are in another app, and the in-ear buds are the round type that stay in my ear perfectly (as opposed to the flat ones which fall out readily). There is 120MB of internal memory and you get a 1GB microSD card with the phone. Its slot is under the battery cover.

The camera is reasonable. It lacks a flash and fared poorly when shooting close in despite the autofocus. Smile shot makes an appearance, ensuring that photos of a person are only taken when they smile. And you can upload images to the web via the built-in ShoZu client.


Outdoors, colours were a bit washed out. Inside, in good lighting, the camera fared reasonably, but image quality degraded as ambient light dimmed. The coloured dish, shot under normal household lights, is acceptable while the photo of the cat, who was basking in bright sunlight, demonstrates good colour accuracy. Outside, the chair is not uniform in its whiteness and lacks definition, neither of which are issues that are unexpected on a cameraphone. 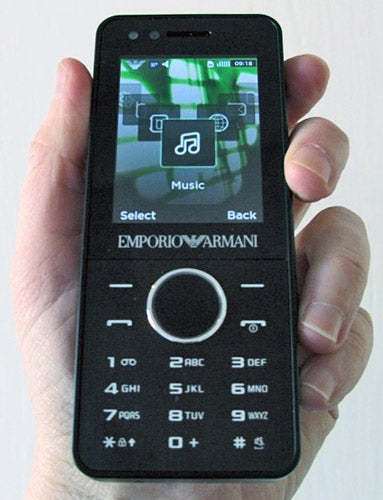 Call quality was good, and so was battery life. Samsung claims 420 minutes of talk-time and 345 hours on standby. I managed between two and three days between charges depending on how much music listening I did.


The love-them-or-hate-them flashing sidelights are a real downer for me as is the branding overkill. Only the surprisingly good audio quality saves this mid-range phone from a lower score though the dual headset system is flawed. Why not just provide a two-piece 3.5mm headset, instead of forcing those who want hands-free to use that microUSB connector, Samsung? 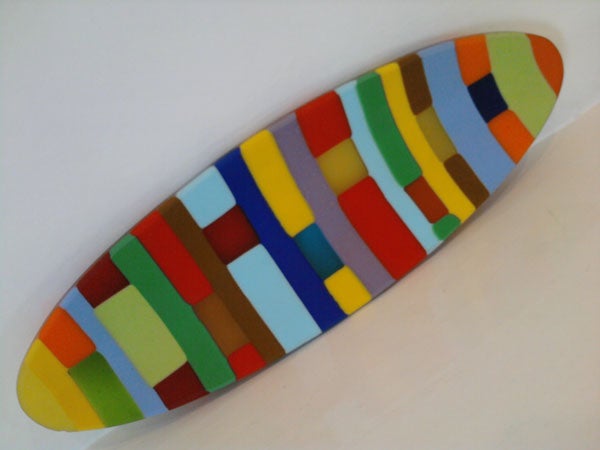 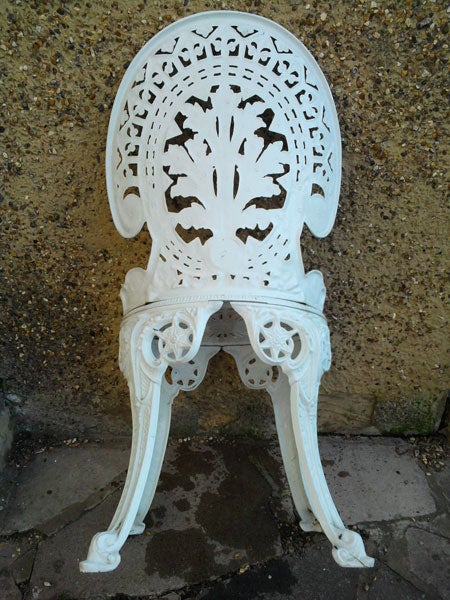 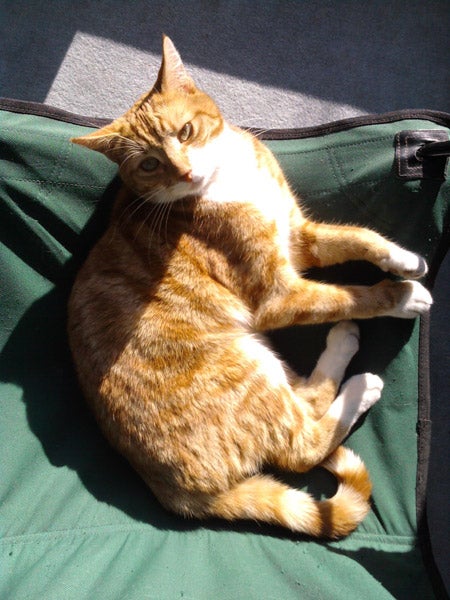