In terms of features and versatility, Samsung’s DVD recorders have always played second fiddle to rival decks from the likes of Panasonic and Sony, but the Korean brand makes up for this in one key area – price. No matter how high the quality of the competition, you can rest assured that Samsung will bring something to market that performs almost as well for less dough – and for most consumers that’s the bottom line.


The DVD-SR150M is a good example of this. You can find it online for under £100 – cheaper than the well-regarded Panasonic DMR-EZ27 – but a glance at the SR150M’s feature set reveals that it shares several of the Panny’s capabilities, the most eye-catching of which is DVD-RAM recording.

Any DVD recorder that uses this flexible format is thereby granted the ability to behave like there’s a hard-disk inside, offering non-linear editing and simultaneous recording and playback. On the downside, only a handful of DVD players support it, which could limit you to watching RAM recordings on this deck only – a real bummer if you want to record something downstairs then watch it in the bedroom later.


The solution, of course is to use one of the other supported formats, in this case DVD-RW, DVD-R or DVD-R Dual Layer, the latter doubling the maximum recording time of a normal single-layer DVD-R. There’s no DVD+RW or DVD+R support, which denies it true ‘multi-format’ status, but overall these four formats should cater for all needs. 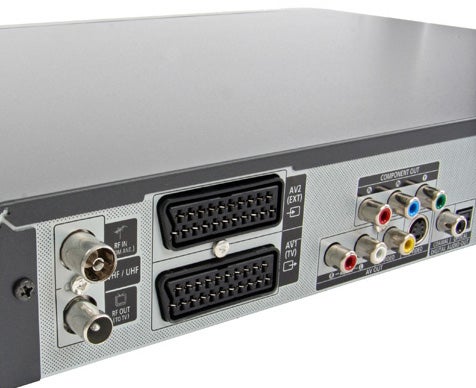 Samsung gets it right in the looks department, lending the slimline SR150M the perfect blend of hi-tech chic and down-to-earth practicality. The sloping fascia, sheltered by an overhanging ‘hood’, is an unusual but effective touch, while the sleek black colour scheme and jazzy blue lights are guaranteed crowd-pleasers. The minimal array of buttons shifts the operational burden onto the remote but leaves the fascia refreshingly uncluttered, while a set of AV inputs and DV port have been sensibly tucked away underneath a flap.


However, the rear panel reveals a disappointing – nay, shocking – omission: there’s no HDMI output. Yes, the SR150M is part of last year’s range, but that’s no excuse – even the most basic TVs have had HDMI inputs for some time. What this means is that you can’t enjoy the picture quality benefits offered by this all-digital connection, and it also means you’ll miss out on hi-def upscaling, which might make HD Ready or Full HD TV owners look elsewhere.


Instead, you have a choice of progressive scan capable component video output and RGB SCART, both of which can deliver strong picture quality. They’re joined by S-video and composite video outputs and a second RGB-capable SCART socket, which is used for hooking up an external TV receiver (like a Sky box) and making high-quality recordings, or looping the signal through to your TV.

On the audio side, you’ll find optical and coaxial digital audio outputs, used for feeding Dolby Digital, DTS and PCM to an AV amp, plus stereo audio output for good measure.


The deck partially makes amends for its HDMI deficiency with the inclusion of a Freeview tuner, which makes it possible to record programmes directly from the built-in 7-day EPG. If your Freeview reception isn’t yet up to scratch, there’s also an analogue tuner to fall back on. The digital tuner offers the usual MHEG-related features (digital text, interactive services) and favourite channel lists, but don’t expect frills like series link or infrared control of external digital TV receivers.

Before hitting record, you can select one of four quality modes – XP, SP, LP and EP. XP uses the highest bitrate of 8.5Mbps, which means you can only fit one hour’s worth of recordings onto a single layer disc, but it offers the best picture quality. In SP, LP and EP modes, the bitrates drop to 4.5Mbps, 2Mbps and 1.6Mbps respectively, allowing you to fit two, four or six hours onto a disc – but the picture quality drops each time. Additionally, there’s an eight-hour (1.2Mbps) EP mode and Flexible Recording, which picks the appropriate mode according to the amount of space left on the disc.


After you’ve made a recording, it can be tweaked using the deck’s editing functions. On the most basic level, you can rename the recording, protect it from accidental deletion or define your own chapter points. But when using DVD-RAM, you can create a playlist of chosen scenes without affecting the original recordings. It’s a nice feature, particularly for camcorder owners who want to piece together a montage of home-shot footage, and it’s easy to do – an intuitive screen lets you punch in start and stop points as you play the recording back. 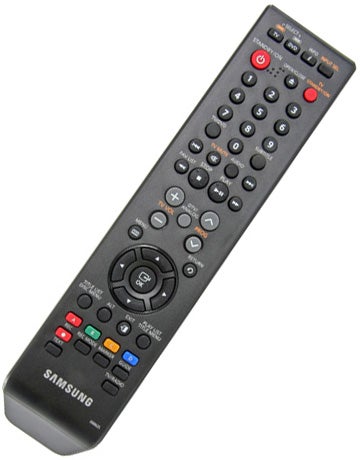 In fact, the rest of the user interface is impressively designed. The setup menu features neatly arranged options supported by eye-catching graphics, while the EPG somehow fits the programme list, programme synopsis and a box playing live TV into one screen, but keeps the whole thing looking logical and uncluttered. Digital TV performance is also generally slick, although channel changing is slower than we’d normally expect. The only other operational let-down is the remote, which looks nice but features too many tiny indistinguishable buttons for our liking.

Onto performance, and the SR150M takes an unusual approach to recording Freeview programmes. It only lets you record from the digital tuner in Flexible Recording mode, which means that when you hit record, it automatically selects the appropriate mode (XP, SP, LP or EP) according to the quality of the incoming signal. For instance, it chose SP for a recording on BBC One but LP for a programme on Channel 4.


The idea is to prevent you from taking up more disc space than you need to by choosing a bitrate that’s too high for the source, which is all very helpful, but to be honest we’d prefer to decide for ourselves thanks. The only way to get round it is to set the timer, but that’s a bit of a pain.

However, we won’t let this limitation detract from the deck’s strong picture quality. XP and SP mode Freeview recordings look sharp and richly coloured, with a pleasingly low amount of noise, and in LP the results are eminently watchable. The soft EP mode pictures raised a few eyebrows but it’s par for the course at such a low bitrate.


Thankfully you can manually change the quality setting when recording from an external source via SCART. XP recordings from a Sky+ box are superb, which is great news for those hoping to archive stuff stored on a hard-disk PVR.


Playback of shop-bought DVDs from the component or SCART outputs benefits from the deck’s impressive colour and detail reproduction, but HDMI would have possibly eliminated the touches of dotty noise around the edge of some objects. The deck also plays DivX, MP3 and JPEG all of which look and sound decent on a good TV or sound system.


It might not give the Japanese big guns anything to worry about, but on the whole the DVD-SR150M turns in a respectable performance. It looks great, recorded picture quality is strong and the inclusion of DVD-RAM recording and a Freeview tuner deliver the knockout combination of flexibility and convenience.


Ultimately though, the lack of HDMI output – and the hi-def upscaling that normally goes with it – makes it feel antiquated and although the sub-£100 price tag is tempting, we’d encourage you to spend a little bit more on an HDMI-equipped model like the Panasonic DMR-EZ27 or even the Toshiba D-R17DT.