All this bickering between Blu-ray and HD DVD makes me wonder why the respective camps don’t cast their minds back to the DVD recording ‘format war’. The fierce rivalry between the RAM, -RW and +RW camps gently faded into insignificance as companies started making decks that could record onto every format, meaning that consumers no longer had to agonise over which one is the best.


All of which means the DVD recorder market is now a place of peace, where different formats live side by side in perfect harmony – and Samsung is one of the main peacekeepers. The DVD-SH855M DVD/HDD combi can record onto every DVD format, including RAM and dual-layer DVD-R and DVD+R media, both of which double the maximum recording time of a single-layer disc.

Of course there’s also a 250GB hard-disk on board, which can hold up to 427 hours of TV if you use the lowest-quality EP setting, or about 64 hours in the highest-quality XP mode. That’s an awful lot of TV by anyone’s standards and it’ll be a while before you have to think about deleting anything.


To those of you about to lose your analog TV signal, rest assured that there’s a digital tuner on board, alongside an analogue one. Among the recorder’s other features is video upscaling to 720p and 1080i, making it a suitable deck for owners of flat-panel TVs. However, unlike the latest combi decks from the likes of Panasonic, Pioneer and Sony, the DVD-SH855M doesn’t offer 1080p, which may disappoint those with Full HD TVs.

Connections include an HDMI output, which serves up those 1080i and 720p pictures, plus progressive scan-capable component video outputs and two SCARTS, one of which accepts high-quality RGB signals from an external digital TV box. There’s a choice of optical and coaxial digital audio outputs for piping Dolby Digital and DTS soundtracks to your AV receiver, plus a set of analog sockets.


The DVD-SH855M is a digital media lover’s dream; not only will it play MP3, JPEG and DivX files from DVDs and CDs, but thanks to the USB port on the front (behind the flip-down panel) it will also play them from flash memory devices and other USB-equipped gadgets. The beauty is that you can copy files onto the hard-disk and access them from one central library, essentially turning the deck into your own multimedia hub. Also on the front is a 4-pin DV input (other names: i.Link, FireWire, IEEE1394) for transferring camcorder footage, alongside composite and stereo audio inputs for other external sources.

When recording from external sources or from the analog tuner, you’re presented with a choice of four recording modes – XP, SP, LP and EP – which respectively offer 1, 2, 4 and 6 hours of recording time on a single-layer, single-sided DVD. In truth, there are actually six modes, if you include the 8hr EP mode (selectable from the setup menu) and the Flexible Recording mode, which automatically selects the appropriate mode for timer recordings, according to how much space is left on the disc.


But unusually, recordings from the built-in digital tuner can only be made in FR mode. It selects the recording mode that’s best suited to the quality of the incoming signal, which means you don’t waste precious recording time by choosing a high-bitrate mode for a low-bitrate broadcast.

With DVD-RAM, DVD-RW VR mode and hard-disk recording on board, it should come as no surprise that the deck’s editing functionality is second to none. When using any of these three formats, you can create playlists of favourite scenes without affecting the original recordings, as well as delete unwanted chunks or split titles in two. For hard-disk recording, you can also watch a title from the start before it’s finished recording or pause live TV.


Rounding off a very enticing feature list is Anynet+, Samsung’s version of HDMI CEC technology, which allows you to control this deck and an HDMI-equipped Samsung TV with the same remote. 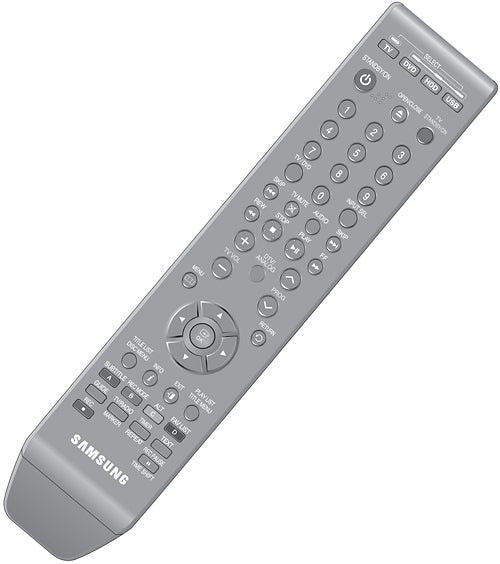 Operating the DVD-SH855M isn’t quite the joyous, carefree experience you’d hope for, due largely to the remote. It’s cluttered with small, confusingly laid out buttons, the most important of which are hidden away at the bottom rather than being given the prominence they deserve.


Otherwise, this deck is actually very user-friendly. The Setup Menu and recordings library are bright, colourful and easy to read, and the EPG is a real feat of electronic engineering – it crams the programme guide, programme information and a box playing live TV into one screen, but doesn’t feel cluttered or hard to follow. The deck is also slick and responsive, with no annoying pauses when changing digital channels or surfing text.

On the whole, the DVD-SH855M is a decent picture performer. Recordings from the built-in Freeview tuner onto the hard-disk look sharp and dynamic, offering strong colour reproduction and competent handling of fine detail. The fact that you can’t select the recording mode didn’t cause any problems – the deck was always spot-on when it came to selecting the right mode for the broadcast it was receiving.


For instance, when recording from Channel 4 or ITV, both of which are broadcast at around 2.7Mbps, the deck selected LP mode, which operates at just over 2Mbps. But for BBC One, typically broadcast at around 4.5Mbps, it selected SP mode with an encoding rate of 4.5Mbps. The upshot is that you get recorded picture quality that is virtually identical to the source every time, without the need to crank it up to the space-consuming XP recording mode. 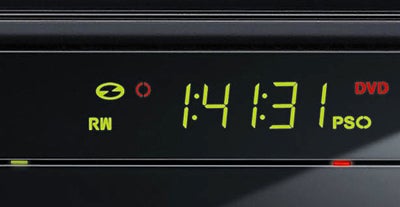 That said, we compared the BBC One Freeview recording in SP with a recording of the same channel from a Sky box in XP mode, and the picture quality from the Sky box was slightly superior.


The difference between XP and SP recordings is minimal, which means you can potentially fit up to four hours of very high quality recordings onto a dual layer DVD. Dropping down to LP or EP mode reveals softer pictures and some break up with fast-moving objects but artefacts like these are kept well within acceptable limits.

With pre-recorded DVDs, the presence of an HDMI output and 1080i upscaling helps the deck to produce some crisp and engaging pictures. Our trusty copies of ”King Kong”, ”Revenge of the Sith” and ”Se7en” were all displayed with terrific fine detail reproduction, striking colours and very few instances of block noise, rounding off an impressive picture performance. We’re sure 1080p upscaling could have taken it to the next level on a Full HD TV, but this will be good enough for most people.


Sound performance is every bit as good as you’d expect from a DVD/HDD combi. Movies sound fantastic through a good sound system, while CD playback through the analog outputs is punchy and well-balanced.


Apart from an ill-thought out remote and the lack of 1080p upscaling, Samsung’s latest DVD/HDD combi is undeniably impressive. Its generous feature list, which includes 1080i upscaling, a USB connection and multi-format DVD recording would be reason enough to take a punt, but it’s also backed up by strong recording quality (despite the fact that you can’t choose the recording mode for Freeview) plus pre-recorded DVDs look great. So if the 1080p-capable Sony RDR-HXD870 or Panasonic DMR-EX87 don’t take your fancy then the DVD-SH855M makes an ideal alternative.