With so many DVD players on the market sporting the same old set-top box design, it’s always nice when a company comes along and shakes things up a little bit. Samsung has done just that with the DVD-F1080, which boasts a sleek pod-like design that makes it look more like a games console than a DVD player.


It’s the sort of deck you can imagine buying for the bedroom, as its light, compact frame means you can perch it on a bookshelf or squeeze it into a tight space – but with such a unique design you might be tempted to give it pride of place in the living room. 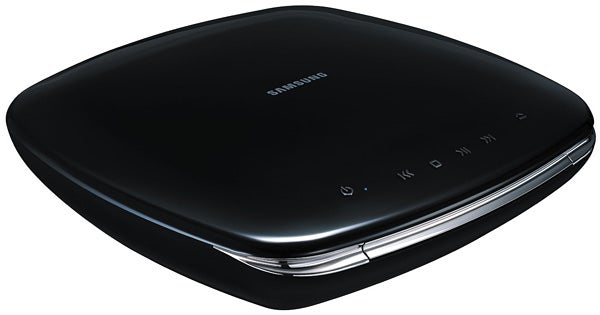 At the very front of the unit you’ll find an ultra thin disc tray and a row of logos which turn out to be touch-sensitive buttons, which are a neat touch but they let out an annoying beep which can’t be turned off. You might also find the lack of a front display panel to be an issue but there’s a thorough onscreen display that tells you the current title and chapter numbers, elapsed time, selected audio track and subtitle language.


The deck’s unusual shape has forced Samsung to leave out some potentially important connections, the most notable being a SCART output. However, there are HDMI, component and composite video outputs, and if you’re hoping to hook it up to a hi-fi or AV receiver then the coaxial digital and analogue stereo audio outputs will be of great interest.


A USB port is usually a Samsung staple, but oddly you won’t find one here, which means the only way to play your PC media library is to burn the files onto CD or DVD first. The unit is DivX certified and can handle files up to version 5 plus VOD content using the registration code in the setup menu, and it also plays other MPEG-4 AVI files, plus MP3, WMA and JPEGs.

Elsewhere the deck outputs Dolby Digital and DTS bitstreams from its digital audio port and decodes Dolby Digital into a two-channel mix from the analogue outputs, but doesn’t do the same for DTS, which is the first real sign of cost-cutting. It can, however, upscale DVDs to 1080p, 1080i and 720p or you can stick with regular 576p if you’re happy with your TV’s upscaling capabilities. The HDMI socket also supports Samsung’s Anynet+ CEC application.

In the box is a credit card sized remote, which is less fiddly to use than we were expecting as it does away with many of the buttons that clutter up Samsung’s full-sized handsets. The playback and menu control keys are helpfully placed for the thumb and all of the keys are clearly labelled.


Hit the Menu button while the disc has stopped and you’re greeted by a neatly-arranged setup menu, but sadly it’s one of the most sluggish we’ve ever encountered. It crawls from option to option with all the speed of a dead snail and makes for a frustrating installation procedure. Found in this menu are a few picture tweaks, including brightness, contrast and colour adjustments and the option to switch the component video output between interlaced and progressive. 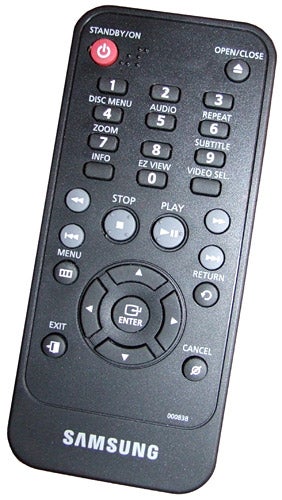 Otherwise the DVD-F1080 does everything you’d expect a DVD player to do, offering a useful range of playback tricks that includes slow motion, frame advance, 128x search speed, zoom, bookmarks and so on.


The EZ View mode button on the remote toggles through a range of screen size options that alter the picture according to the aspect ratio of your TV and the source material. So if you’re playing a 4:3 disc on a widescreen TV, for example, the Screen Fit mode stretches the image to fill the screen horizontally but cuts off the top and bottom. If you’re watching a 16:9 disc on a widescreen TV, Screen Fit can be used to make the black bars on a 2.35:1 movie disappear (but inevitably it makes the image look stretched). It’s the sort of thing your TV can probably do already but you might prefer to do it at the source.

For such an affordable and unassuming player, the DVD-F1080 produces very pleasing pictures that look great on a big or small screen. When playing ”The Fellowship of the Ring” from the component video output for instance, the warmth and purity of the deck’s colour reproduction is the first thing that jumps out, making the glorious greens and browns of the Shire look realistic and absorbing. It’s also good to see very little banding and block noise within large areas of colour.


The DVD-F1080 musters some surprisingly deep and punchy blacks, which makes movies appear forceful and filmic and helps eke out the kind of fine detail that can really bring a DVD picture to life. And when using the HDMI output with the upscaling set to 1080p, its ability to draw out this movie’s minutiae gets even better, making everything from Gandalf and Saruman’s weathered faces to the beautifully rendered CG shots of Rivendell look pin-sharp and focused. 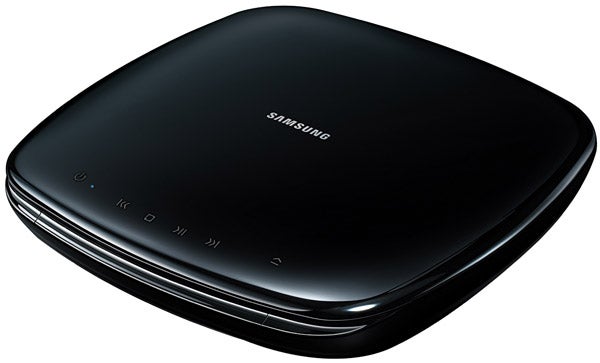 It’s not perfect however – some darker scenes, such as the shots of Gandalf on top of the tower at Eisengard, reveal some wispy, pulsing noise in the surrounding skies, plus the deck also judders slightly and loses focus during camera pans.


When listening to downmixed Dolby Digital soundtracks through the stereo audio outputs, the sound on offer is clear and dynamic, allowing the important parts of the audio such as speech and music to be heard without having to crank up the volume to ridiculous levels. But the best sound quality is achieved by channelling the digital audio output through a suitable sound system, offering up a sensational surround soundstage.


The budget price and lack of videophile features means that Samsung’s DVD-F1080 isn’t designed to be the centrepiece for a serious home cinema system – it’s simply a fun, stylish upscaling deck that’ll look great in the living room or bedroom. Its impressive picture quality is an added bonus and partially makes up for the sluggish operating system and lack of USB port. Overall a great value player.