Recent research in the US showed that the biggest challenge faced by Blu-ray manufacturers is not hi-def digital downloads or high hardware prices but the fact that people are perfectly happy with the picture quality from their upscaling DVD players. And judging by some of the upscaling decks we’ve tested recently, we can understand why – they might not be hi-def, but the pictures are sharp enough to make anyone think twice about paying £300 upwards for a hi-def deck.


Despite this, the wisdom of putting 1080p upscaling into a DVD player is still a subject of much debate, given that Full HD TVs do the same job anyway, but if the player’s upscaling is better than your TV’s then it’s worth making it do the donkey work. As the model number suggests 1080p upscaling is the key feature of Samsung’s latest DVD player, which makes it a cost-effective movie source for a Full HD TV or projector.

On the outside the DVD-1080P8 is a real stunner, fitting in beautifully with Samsung’s flatpanel TVs and Blu-ray players. Its clean lines, sleek black finish and minimal, uncluttered fascia make it look more esoteric than your average budget player, though the deck’s slimline dimensions make the display panel hard to read. Also disappointing is that the front is devoid of a USB port, which means the only way of playing digital media files is from DVD or CD.


On the rear panel you’ll find a sparse but functional set of sockets, which includes the all-important HDMI port (which delivers upscaled video to your display), an RGB-capable SCART and composite video output. Interestingly there’s no component video output, but with the HDMI output offering progressive scan it’s no great loss. For audio Samsung offers a choice of optical and coaxial digital outputs for piping Dolby Digital, DTS and MPEG-2 bitstreams to your amp, plus stereo audio output for connection to a two-channel system.


Aside from 1080p upscaling, there aren’t many other features to get excited about. Perhaps the most appealing is the deck’s ability to play back MP3, WMA, JPEG, XviD and DivX files. For the latter, there’s a code in the setup menu that allows you to register your player and watch Video-on-demand content.


Otherwise it boasts all the usual trickplay functions, such as a two-stage zoom mode, bookmarks, an unusually fast 128x search speed, slow motion, Instant Replay and Skip functions that enable you to skip forward or back by 10 seconds. EZ View makes the picture fit the screen in different ways depending on the aspect ratio of your TV and the source material. The deck also supports Samsung’s Anynet+, the HDMI CEC mode that allows it to be controlled by the remote from a compatible Samsung TV.

Delve into the setup menu and you’ll find a couple of other things to play with, such as brightness, contrast and colour settings (from 1 to 5), and a brightness-boosting Black Level mode. Also here are the HDMI resolution options, where you can choose to manually upscale the picture to 1080p, 1080i, 720p or 576p/480p, or select Auto and let the deck talk to your TV to find the most appropriate setting.


The DVD-1080P8’s menu architecture is easy to follow and looks terrific thanks to the use of bright colours and simple icons, though the main menu is slow to react to commands from the remote. As for the remote itself, it feels quite cluttered and many of the keys are too small, but thankfully their logical arrangement and the zapper’s ergonomic shape make it comfortable to use. 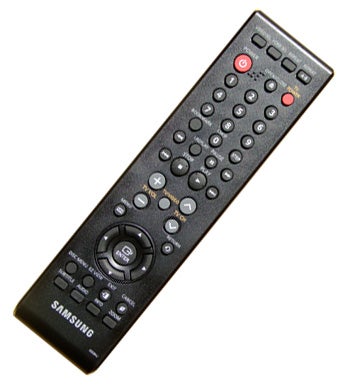 Although it was never likely to match the superlative pictures offered by more expensive decks like the Denon DVD-1940 or the OPPO DV-981HD, the DVD-1080P8’s picture quality is still excellent. We tried it out with ”Sin City” on DVD and were very impressed by the clarity and depth of the image, which is mostly down to the deck’s extensive contrast range. The movie’s monochromatic palette may seem simple to reproduce but it’s deceptively difficult – there’s a lot of subtle shading and tricky dark scenes that could cause problems for a below-par deck, and thankfully the Samsung takes it all in its stride. During the fight between Marv and Kevin at the farm for instance, it’s easy to make out what’s going on and background detail is clearly visible.

And the movie’s fleeting glimpses of colour, such as the dazzling red of Marv’s heart-shaped bed, reveals the DVD-1080P8’s strong colour reproduction, while the lack of block noise is evidence of some slick MPEG-2 decoding. We’re also pleased to report that the upscaling is impressive, making the image look sharp and natural with no jagged edges or noise, and in 1080p mode it looked marginally better than the upscaling inside our 1080p test TV.


Sonically there can be few complaints, with clean and untainted 5.1-channel performance from either of the digital audio outputs plus warm and well-balanced CD playback from the stereo audio outputs. If you’re pairing it with an undemanding sound system its music reproduction should suffice but it could be exposed on a high-end system. MP3 and WMA files also sound crisp and dynamic, while JPEG and DivX files look great, even on a big screen.


If you’re looking for a simple, reasonably-priced DVD upscaler to pair with your Full HD TV, then Samsung’s DVD-1080P8 is a solid choice. It does all the DVD basics with minimal hassle and offers superb picture quality, but the icing on the cake is its stylish design, which makes it one of the best-looking sub-£100 players around.


The only problem is a distinct lack of excitement on the feature list – there’s no USB port, DVD-A/SACD playback or component video output, and it’s not multiregion out of the box. If you want embellishments like these it might be worth forking out a few more quid but otherwise the DVD-1080P8 will make a fine addition to your system.