Samsung, though a latecomer to the business printing party, has established itself as a valued guest. Its combination of well-made, in-house designed laser printers, both monochrome and colour, also attract good discounts, making them some of the most affordable products in their classes. The CLP-550 is a mid-ranged, non-networked colour laser, designed for the small office or workgroup.


The popular image of a colour laser printer is a big, heavy square box with lots of different parts inside, each of which has to be maintained separately to get colour prints out. The CLP-550 doesn’t go far to dispel this view. It’s almost cubic bulk is a definite two-man lift and most of its surfaces are covers, which swing out to reveal parts of the mechanism inside. 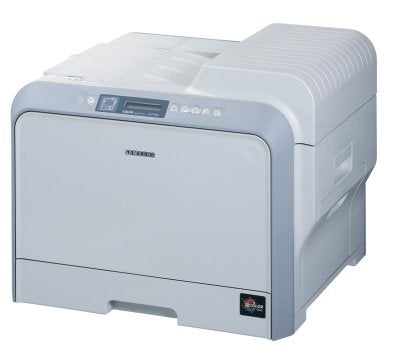 You position the printer sideways on your desk, as the control panel lies along its long edge and the 250 sheet paper tray slides out from the base of its long face. An additional, 100-sheet multi-purpose tray folds out from the right-hand side of the machine, for media such as envelopes or transparency sheets.


The controls comprise a group of five buttons to control the printer’s menu system, with a cancel button and power light on the other side of a two line, 16-character mono LCD display. The menu system is pretty easy to navigate, though the display would benefit from a back-light.


There’s also a status map, with five pin-head LEDs indicating different parts of the printer where a page might jam or consumables might run out. Nothing went wrong while testing, so none of these LEDs lit up, though we did see a couple of multiple-sheet feeds.


On the left-hand side are USB 2.0 and parallel sockets, while Ethernet and wireless networking connections are available as options.


There are two interlocking covers on the printer; you must open the front door fully first, before the top cover can be lifted. Inside you have an imaging unit, the most prominent feature of which is a large photostatic drum, a transfer belt and four toner cartridges. The imaging drum drops in first, right into the bowels of the printer, with the transfer belt on top and the four wide, flat cartridges sliding in, one above the other, from the front.


It’s quite a complex procedure to install everything, and if you’ve never slotted consumables into a laser before, you may have to fiddle around, as the user guide diagrams are small and not that clear.

Once the covers have been locked down again, printing is straightforward. The driver is little more complex to use than a mono laser’s, but the extra controls, for colour balance and tone tuning, are there if you need them. There’s support for overlays and watermarks, and for the printer’s built in duplexing (double-sided printing); you can also save up to 32 suites of printer settings.


Despite all this versatility, there appears to be no way of setting the CLP-550 to default to A4 paper. With A4 loaded in the main paper tray and with A4 selected as the default in the printer’s menu, the driver still comes up with US Letter, each and every time.


Print quality is good on text and graphics, with clean printing even of very thin rules and character swashes. Areas of solid colour in business graphics are smooth, with almost no banding. Photo printing is not as good, with colours over-vivid and detail lost in dark shadows. You can adjust for this, but it’s fiddly, particularly if the photos are part of a more complex document. 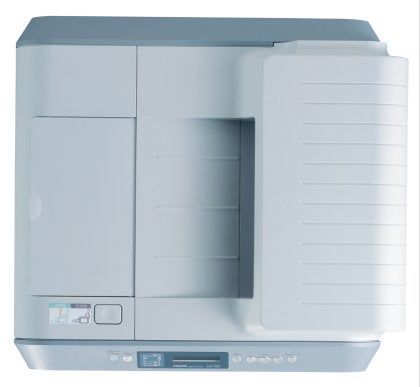 Print speeds are in the right ballpark for a colour laser in this price range, with a five-page document taking just over a minute and a 5 x 3, 1,200dpi photo completing in 37 seconds. Our 20 side, duplex document took just under two and a half minutes.


Samsung labels the CLP-550 as ‘No-Nois’. The ‘e’ must have been removed so you don’t confuse the term with ‘no noise’. When running, Samsung itself claims that the printer produces up to 49dBA, which is quite noisy, but we measured it at a louder 56dBA (at 0.5m, 45-degrees off-beam), including an annoying ticking, while printing. Whoever has the CPL-550 sitting next to them in a workgroup will know about it.


The imaging unit and transfer belt are rated at 50,000 pages each, but that’s 50,000 pages of five per cent black cover. If you regularly print in colour – and why else would you buy a colour printer? – with a still fairly meagre coverage of 20 per cent, the service life drops to 12,500 pages for both consumables.


The printing costs may still work out at reasonable levels – 1.84p per five per cent page for black print and 7.70p per 20 per cent page for colour – but the service life of the consumables could mean you need to replace parts more frequently, with increased down-time and service labour costs. It depends how heavily you intend to use your CLP-550, but with a rated maximum of 35,000 pages per month, it will stand heavy use.


The CLP-550 is an attractively priced colour laser, with reasonable print speeds. It’s inability to recognise A4 paper correctly is an annoyance, and it doesn’t really live up to its “No-Nois” labelling, but with a rated duty cycle of 35,000 pages per month, you should be able to work it hard – just watch those consumable costs.