How do you use your computer? This may seem a silly question, but you need to think about it long and hard because every pro and every con in this review will return to this one question. We’ll show you want we mean…

As you are no doubt aware, the Samsung Chromebook is the first commercially available, mass market computer based on Google’s Chrome OS. As such expectations are different. With most modern PCs users pick Mac OS, Windows or Linux. The software is a known quantity and the challenge is choosing the right hardware to go with it. Conversely for Samsung it has the brief luxury of being the only major Chrome OS device on the market, but it will be judged as a package, both on its hardware and for Google’s software.

Consequently while we wouldn’t spend a great deal of time speaking about the operating system in a typical laptop review here it is a cornerstone. As such we’ll tackle the Samsung Chromebook in two parts: 1. How well Samsung has managed to build hardware around Chrome OS, and 2. Regardless is Chrome OS worth using? First, point one.

Again (without developing more tributaries than the Nile Delta) this can be split into two parts: outside and inside. On the outside Samsung has done an excellent job. The glossy finish to the white lid on our review sample may not be to everyone’s taste, but overall build quality is excellent. The hinge is well made, the isolation keyboard is stiff, but has plenty of feedback and the large clickable trackpad is surprisingly effective – it’s not far of being as nice as that of the Samsung 9 Series and Apple’s range of MacBooks.

In addition the 12.1in screen (1280 x 800 pixels), while not the brightest we have seen, has a wide viewing angle and good colour reproduction. It is also sports a matte finish which greatly cuts down on glare and is something we’d prefer to see on all laptops.

Where its budget roots do start to show through is the connectivity. Granted with a Chromebook you won’t expect to connect a great deal of peripherals (virtually none given driver support) so the pair of USB ports isn’t a big issue, but the lack of Ethernet and HDMI ports (more of later) are a surprise. Elsewhere you will find a shared mic/headphone port, mini VGA port (adaptor provided), 4-in-1 card reader and SD card slot for bolstering the 16GB of flash storage.

Yes you read that correctly: just 16GB of hard drive space. Given you are going to be living online this makes sense and choosing solid state memory makes operation fast. Or does it? Step inside the Chromebook and questions start to be raised.

Strangely for a Cloud only device Samsung has made 3G an optional extra (a £50 one at that) and opted for Intel’s weedy integrated graphics. We’ll get onto price later, but the latter is doubly damaging because it struggles with 720p video and turns 1080p into a picture slide show, (hence no HDMI). It also lacks the power to take weight off the CPU’s processing duties exposing the limitations of the Atom N570 more than it should. 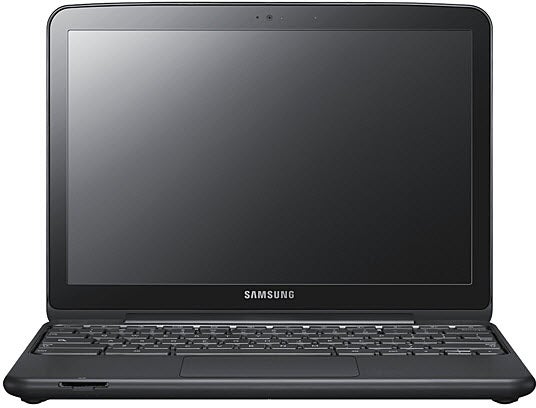 A final query is weight. At 295 x 218 x 20mm the Chromebook is perfectly portable. At 1.48Kg it won’t tear a hole in your bag either, but with such minimal innards it is hard to see why it isn’t lighter still. So in sum Samsung has made an excellent laptop, but its performance is limited. Moving onto Chrome, the same allegations are true.

We’ll begin with the positives. Booting up is almost a thing of the past. From cold you can be using Chrome OS in five to eight seconds. Meanwhile resumption from standby is faster than you can open the lid and get your hands into a typing position. Google has long said Chrome isn’t a replacement for Android or a competitor to the iPad’s iOS, but it certainly gets you up and running.

For the technophobic setup is also a breeze. Simply choose your WiFi or (if purchased) 3G network, login with your Google account details (or create an account) and you are ready to go. Provided you already use Chrome and have setup its sync functionality, all your bookmarks, settings, passwords and extensions will be arranged exactly as you left them on your laptop. Any changes you make in Chrome OS will be automatically synced to your other PCs running the Chrome browser and vice versa.

This ease of use and cross device functionality provides a glimpse of the future and since no data is actually stored on the Chromebook it is also protected should anything go wrong with the laptop itself (see Google’s video above). Furthermore say goodbye to viruses.

Of course the primary reason for Chrome OS’s simplicity is it is a simple concept. It is just a full screen Chrome web browser with time, WiFi manager and battery life added to the top right corner. Nothing more. This actually makes excellent use of the available screen real estate as there is no space given up to a taskbar or even window controls since there are no windows. The obvious downside to this is the lack of a split screen, but Chrome OS tackles this with multiple homescreens that slide left or right much like Android on a smartphone. It doesn’t solve the problem entirely, but it is an elegant workaround.

So far so good and Samsung has worked hard with Google to optimise this browser-exclusive environment. Gone are the keyboard’s F keys, replaced with back/forward, reload, full screen, switch homescreen, brightness and volume controls. Bizarrely the delete key has also been sacrificed, but it can be accessed by combining backspace with alt. A final cherry on top is such single minded focus results in great battery life. You’ll get an incredible eight hours of real world usage before the battery gives out, which again places the Chromebook within touching distance of many tablets.

So what are the problems? Unfortunately they are numerous. Some were avoidable, others inherent, but they fall both at the feet of Samsung and Google as well as the state of the mobile networking in general.

As touched upon, Samsung’s faults lie in its choice of CPU and, more pertinently, GPU. You may only want to surf the web, but pages render slowly and scrolling on complex sites is jerky. Video playback on YouTube or iPlayer results in skipped frames and even 720p struggles with more than a few tabs open. Quite frankly, for a better surfing experience just install the Chrome browser on your existing laptop and utilise its greater power. 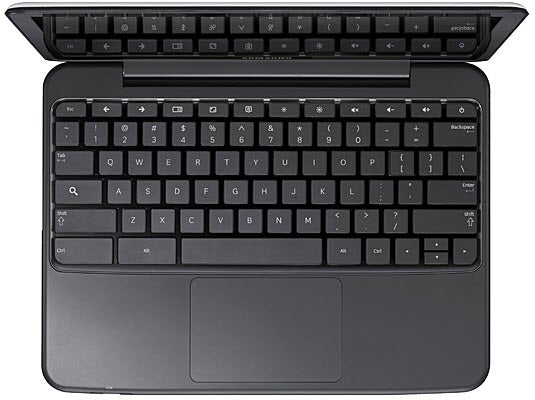 This wouldn’t matter so much if Samsung had made the Chromebook dirt cheap, but £350 is netbook territory and adding in 3G takes it to £400, a price for which you’ll find many fully fledged laptops and, critically, Android tablets and the iPad 2. To compete Chrome OS machines need to be closer to the £200/250 mark.

If Samsung got its internal hardware and pricing wrong, however, Google also plays a major factor in our overall frustration. The overhaul of Google services and premature cancellation of Google Gears while the company moves to HTML5 means offline support is nonexistent. So take an Internet connection away from Chrome OS and it becomes essentially useless. No good on a train, no good on a plane. Why Google did not choose to overlap the demise of Gears with the switch to HTML5 is a mystery and it forces users to pay out for the more expensive 3G option.

Lastly even if you are prepared to pay out for 3G then the breaks in service and erratic speeds you experience will affect Chrome OS more than any other platform. After all you cannot stream music with something like We7 and photo edit using, for example, Picnik without dragging these services to a standstill. This can be struggle enough on a decent broadband connection and makes multitasking on the move tough.

In fact everything consumes bandwidth, so even a game of Chrome’s optimised Angry Birds can kill your music while the poor GPU means it performs with more judder than you’ll find on a modern smartphone in any case. Meanwhile all the time you will also be checking your data consumption over 3G for fear of running up huge bills. This is when being able to cache music offline or natively install games would make a world of difference to Chrome OS and its uncompromising approach is sadly ahead of its time. On the one hand this isn’t Google’s fault, but on the other it does demonstrate its creators haven’t spent a great deal of time in the real world.

This is also the kind of scenario which leads to questions about Chrome OS as a whole. After all Android 3.0 (Honeycomb) has a full screen tabbed Chrome web browser, but it also supports local music and apps with far greater functionality than can be found on the web. Wrap Android 3.0 into a Samsung Chromebook with a better GPU and lower RRP and we could have had something really special. 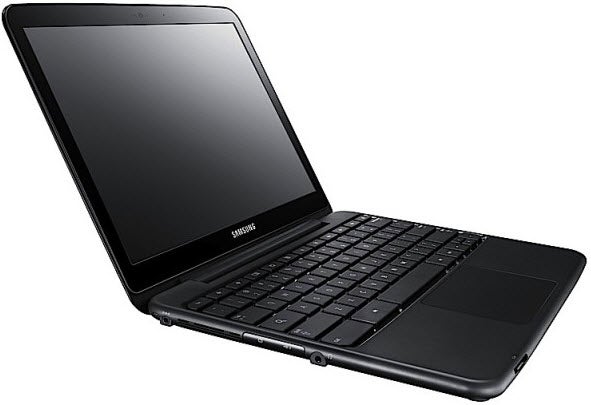 Verdict
We come back to the question central to the start of this review: how do you use your computer? If you wish solely to consume online content then the beautiful design of the Samsung Chromebook arguably lets you do this with more grace than a tablet or netbook and it has superb battery life. For technophobes it also offers a get up and go solution that is unsurpassed in its simplicity.

The problem is theory does not live up to reality. Even more portable devices like smartphones and tablets use a mix of offline and online functionality to create far more powerful and flexible solutions making Chrome feel unnecessarily limited. Meanwhile the price of Samsung’s Chromebook pushes it towards budget laptop prices at which point you might as well buy one of those, install the Chrome browser on it to enjoy the best of both worlds.

There is huge promise in Chrome OS and Samsung’s Chromebook design only requires tweaking under the hood. As it stands, however, skimping on the Chromebook’s performance and combining that with the rigidly uncompromising vision of Chrome OS creates a fundamentally flawed freak that doesn’t quite fit in anywhere.