Of course, the first thing to say about this monitor’s image quality is just how big the picture is – at least in one direction. With a resolution 3840 x 1080, you get a very wide image that’s great for arranging several windows next to each other.

During my time with the monitor I settled on having Outlook open on the left, Firefox on the right and Word/Excel or whatever else I was working on in the middle.

Meanwhile, if you enable the PBP mode then you get two 1920 x 1080 displays side by side, which is ample for doing practical work on two displays simultaneously. It’s an absolute godsend for benchmarking other products you’re reviewing while still being able to work on your main PC!

The downside to this display layout and resolution is the modest 1080 vertical resolution. If you’re used to a 2560 x 1440 pixel 27-inch monitor then the drop in the number of vertical pixels does feel a little constricting. That’s particularly true if you work with pictures and video. For that sort of work, a display with a conventional 16:9 aspect screen with a higher resolution will be more useful. 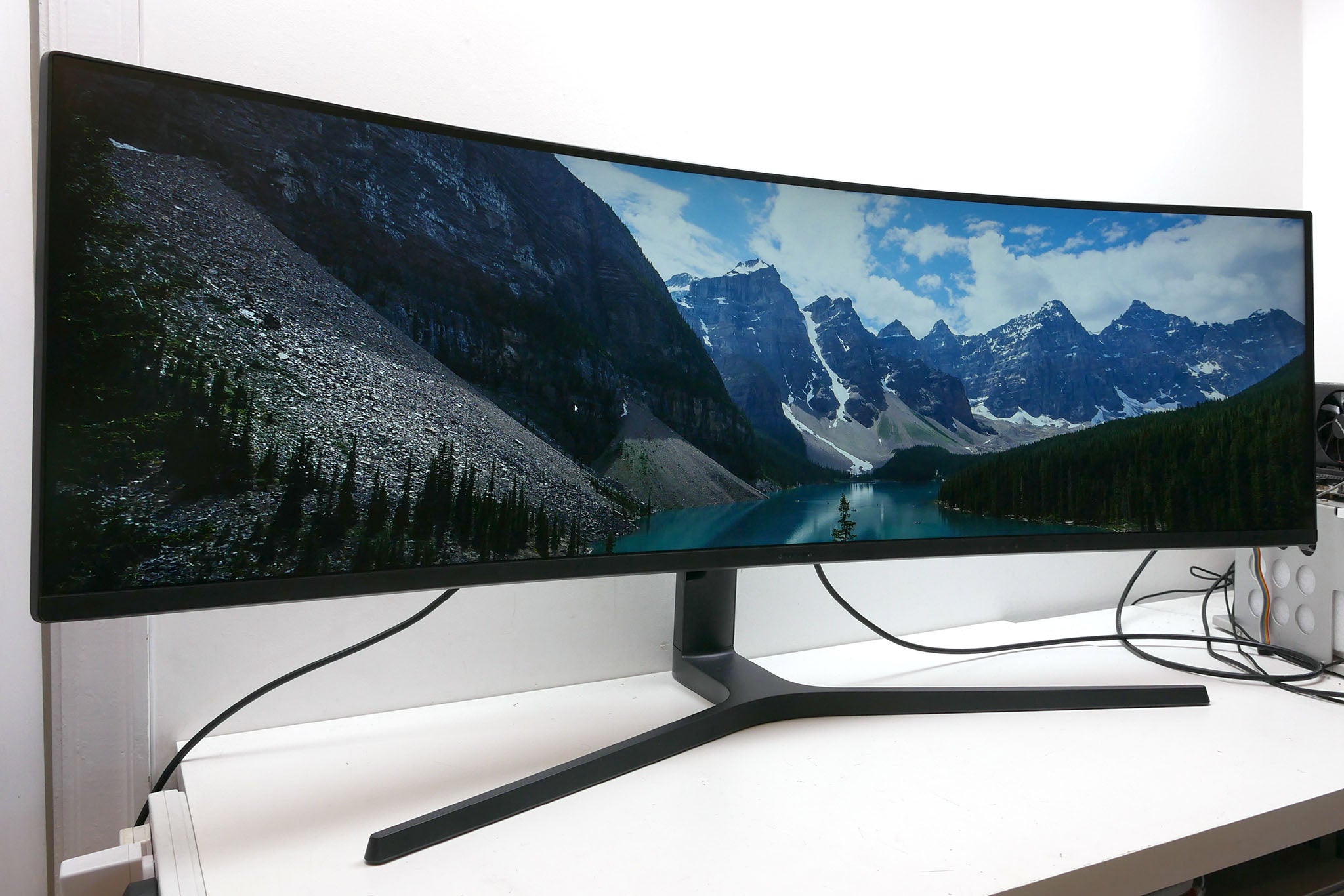 Combined with the slightly annoying stand design, this is the second reason thata deep desk is something of a must with this display. For optimal use you’ll want to be sat 70-80cm away from it, rather than the more typical 50-60cm.

Otherwise, its image quality is fantastic. The VA LCD panel provides excellent viewing angles, making for a consistent-looking image from wherever you view it. Technically, its vertical viewing angles aren’t quite as good as IPS displays, but in use this wasn’t apparent – especially if you’re sitting further back when using it.

Colour accuracy is also very good. Right out of the box it delivers a near-perfect colour balance, with a colour temperature of 6885K.

Meanwhile, its Delta E average of just 0.13 shows it can perfectly distinguish between fine differences in colour. The only slight slip-up is that the sRGB colour space coverage of 90.5% isn’t quite up there with the very best. Nevertheless, it’s still more than enough for all but the most demanding of professionals.

All this and that VA panel delivers exceptional contrast levels, too, making for deep, rich-looking images that happily show inky blacks alongside bright colours. VA LCD technology is the best for native contrast but generally it hits around 2000:1. Here, though, it registers as 2974:1.

The display also offers impressive uniformity, considering its size. It varies by at most 8.07% in brightness across its entire surface, with an average variance of 4.25%. The colour temperature suffers only a 0.7% average variation.

Although the image is very good right out of the box, things can be improved a little. Our review sample had a very slightly high colour temperature, so dropping the RGB colour value from 50 x 50 x 50 to 50 x 50 x 46 corrected this, resulting in a measurement of 6487K. This also improved the colour space coverage, Delta E and gamma results.

As for gaming, the C49J89 makes for an interesting option. For a start, its mega-wide aspect ratio, while largely supported across a wide variety of games, doesn’t always result in an improved view.

For instance, in PlayerUnknown’s Battlegrounds, while the horizontal viewport is indeed increased, the vertical viewport is reduced compared to a conventional 16:9 screen. This doesn’t affect trying to spot enemies and engage in firefights, but it made looking down to pick up loot more difficult. 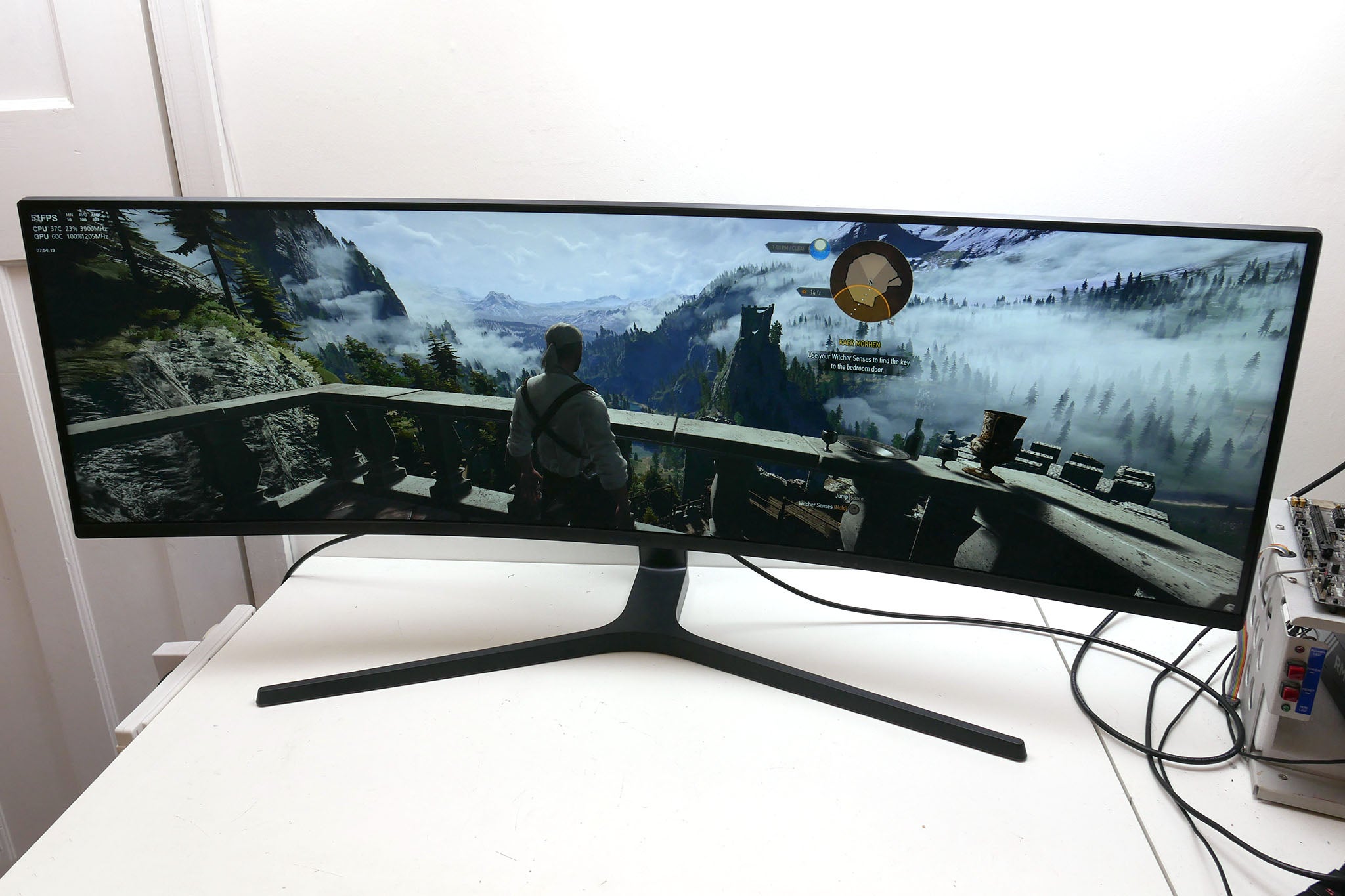 This trend is seen throughout other games, and often where the viewport is extended horizontally, it won’t actually show anything extra over and above what you’d see on a 21:9 screen. Instead, it stretches out the edges of the image, akin to a fish-eye effect.

Otherwise, the display delivers a decent gaming experience. The response time of the VA panel can’t compete with a TN or even IPS display, but you definitely still feel like you’re on a 144Hz screen. Meanwhile, the lack of G-Sync or FreeSync is noticeable, but it’s a small compromise.

Overall, we’d probably still opt for a 21:9 or 16:9 screen for gaming, but if you’re after a master-of-all-trades display that can serve your multi-computer, large-desktop productivity needs and still provide decent gaming, then the Samsung C49J89 is more than up to the job.

The Samsung C49J89 is an interesting option for those seeking a big-screen monitor. Its significant 49-inch size, 32:9 aspect ratio, built-in KVM and picture-by-picture mode combine to make a fantastic productivity tool for those working with multiple PCs or other video sources.

It also offers excellent overall image quality, with its huge contrast ratio being a particular highlight, and its 144Hz refresh rate making it a capable gaming display too. Its £899 asking price is also reasonable considering everything you get here.

However, the 32:9 aspect ratio and relatively low vertical resolution means that for those primarily seeking an ultra-wide display for gaming and single-PC use, a more traditional 21:9 aspect ratio screen will be a better bet.

This mega-wide monitor is fantastically versatile and has great image quality, making it well worth a look.