The C49J89 may not have a particularly enticing name, but this behemoth of a monitor is in fact packed with exciting features.

Most obviously, it’s huge. It measures 49 inches from corner to corner and it has an ultra-wide aspect ratio of 32:9. In other words, it’s the same size as two 27-inch monitors sat side-by-side.

What’s more, to take full advantage of that massive screen, the C49J89 also includes a built-in KVM. This allows you to connect up one keyboard (K), monitor (V) and mouse (M) to two PCs and switch between them. You can also enable a picture-by-picture mode so you can see both PCs at once, and switch control between them at the touch of a button.

At this point, some of you may be thinking you’re having déjà vu all over again – this monitor looks identical to the Samsung CHG90. And, sure enough, it’s essentially the same beast but re-tooled for business use. However, by removing the rather lacklustre HDR features of that display, adding in a KVM and reducing the price, this may well be the better buy of the two.

For such a gargantuan display – and doubly so for one that’s aimed at business use – the C49J89 is surprisingly stylish. Its panel is curved, which adds a certain elegance, while the use of a narrow, semi-covered border makes the edges of the panel nice and slim. 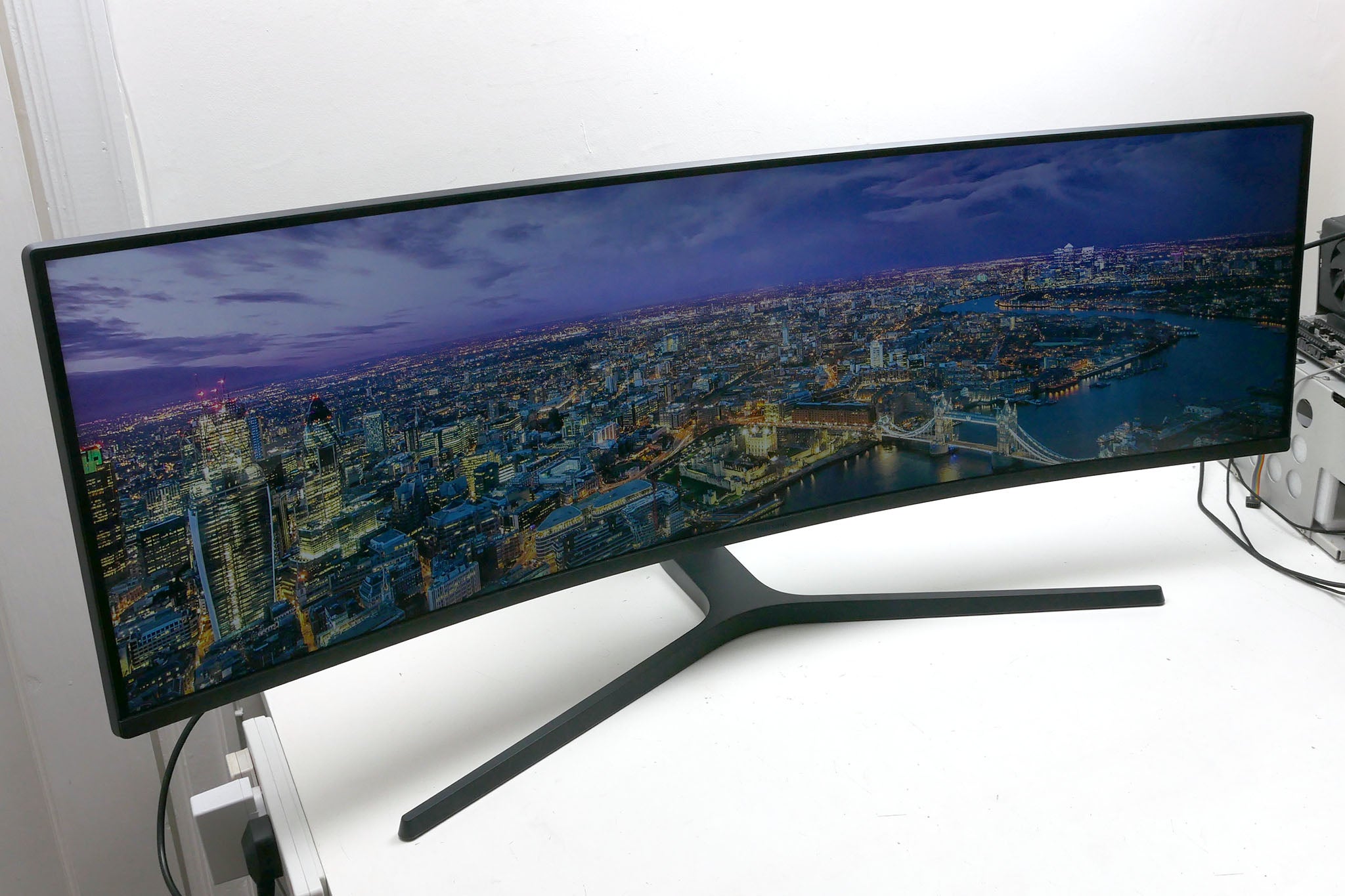 The simple stand design, dark grey metallic paint and general lack of anything flashy also give it a classy feel.

However, there’s no getting round just how much space it takes up and how heavy it is. You really will need to be careful putting its stand together and manoeuvring the whole thing into position.

In this regard, the stand doesn’t offer the most practical design; a large rectangular base on which to shift around the weight of the display would have proved easier.

In fact, aside from looking good there’s little to like about the base of this display. Its long, splayed feet/legs stretch so wide and far forward that they get in the way quite considerably – unless you have a deep desk and are able to push the display further back. In particular, I found gaming was severely impacted as my mouse cable would snag on the tip of the foot.

Otherwise, the stand deserves praise for including height, tilt and rotation adjustment, plus it can be removed and a VESA-compatible stand used instead. On the very back of the stand there’s also a flip-down headphone stand, which is a nice idea. In reality, however, it’s totally impractical as you can’t see or even really reach it when sat in front of the display. 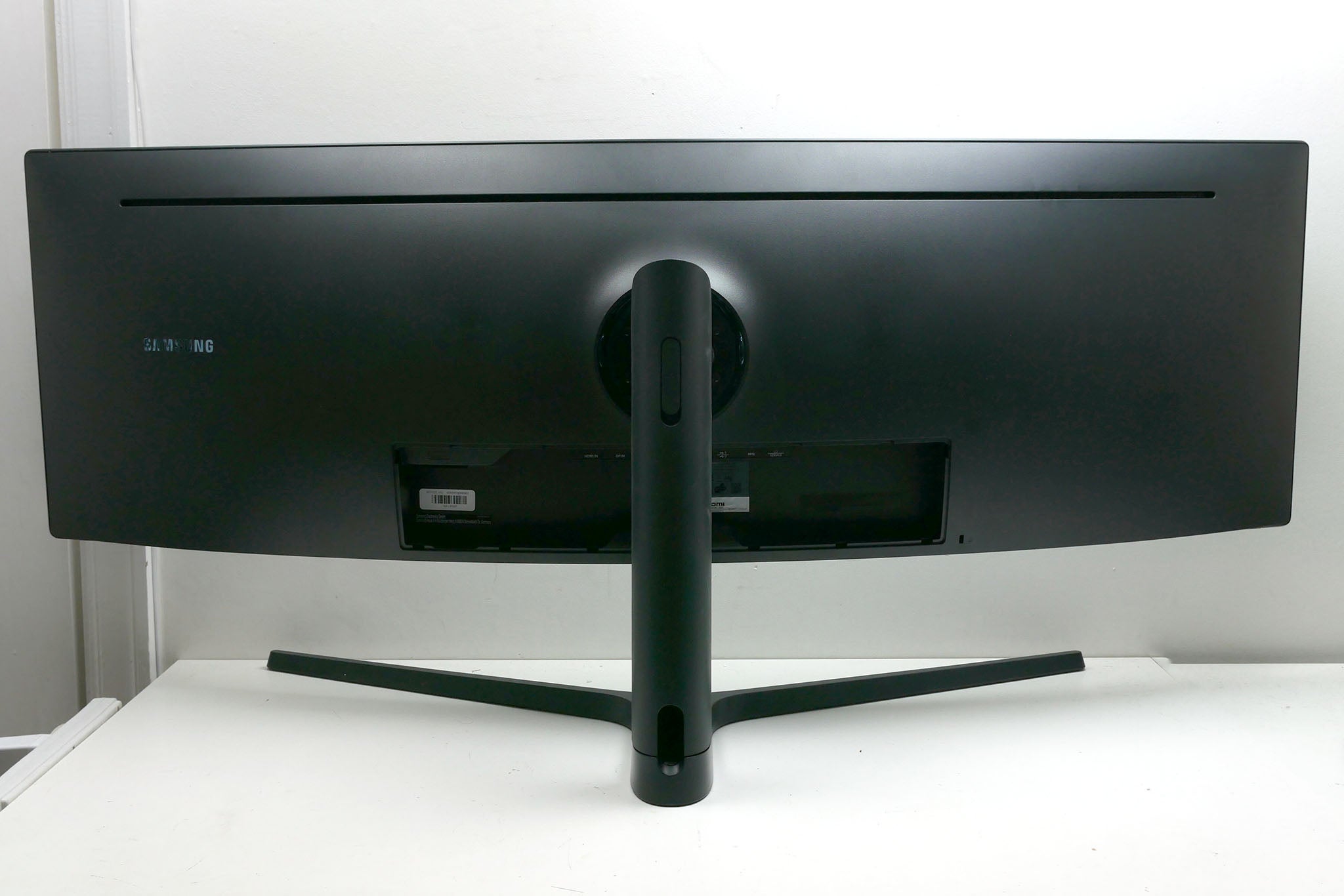 On a similar note, connectivity, while plentiful, is among the least accessible I’ve ever encountered on a monitor.

All the ports are on the back, in a recessed section that can be covered over with an included plastic panel. It makes for a tidy setup once sorted, but it’s a pain for changing devices once setup – which is a reasonably likely occurrence given this display is intended for use with two or more computers.

It’s the combination of the location of the ports and the angle that they’re at that makes it next to impossible to plug stuff in without wedging your head under the display to see what you’re doing.

But, what a selection of connections you get. For video, there’s a DisplayPort 1.2 an HDMI 2.0, plus two Type-C USB ports. Then there’s a further USB Type-C ports for connecting your computer to the display along with two USB 2.0 ports and a USB 3.0 port.

There’s also a headphone jack and – as you’d hope for such a large display – the power supply is internal so there’s no big power brick to worry about.

All in all, while there are a few quirks to this display, it largely makes a good first impression. 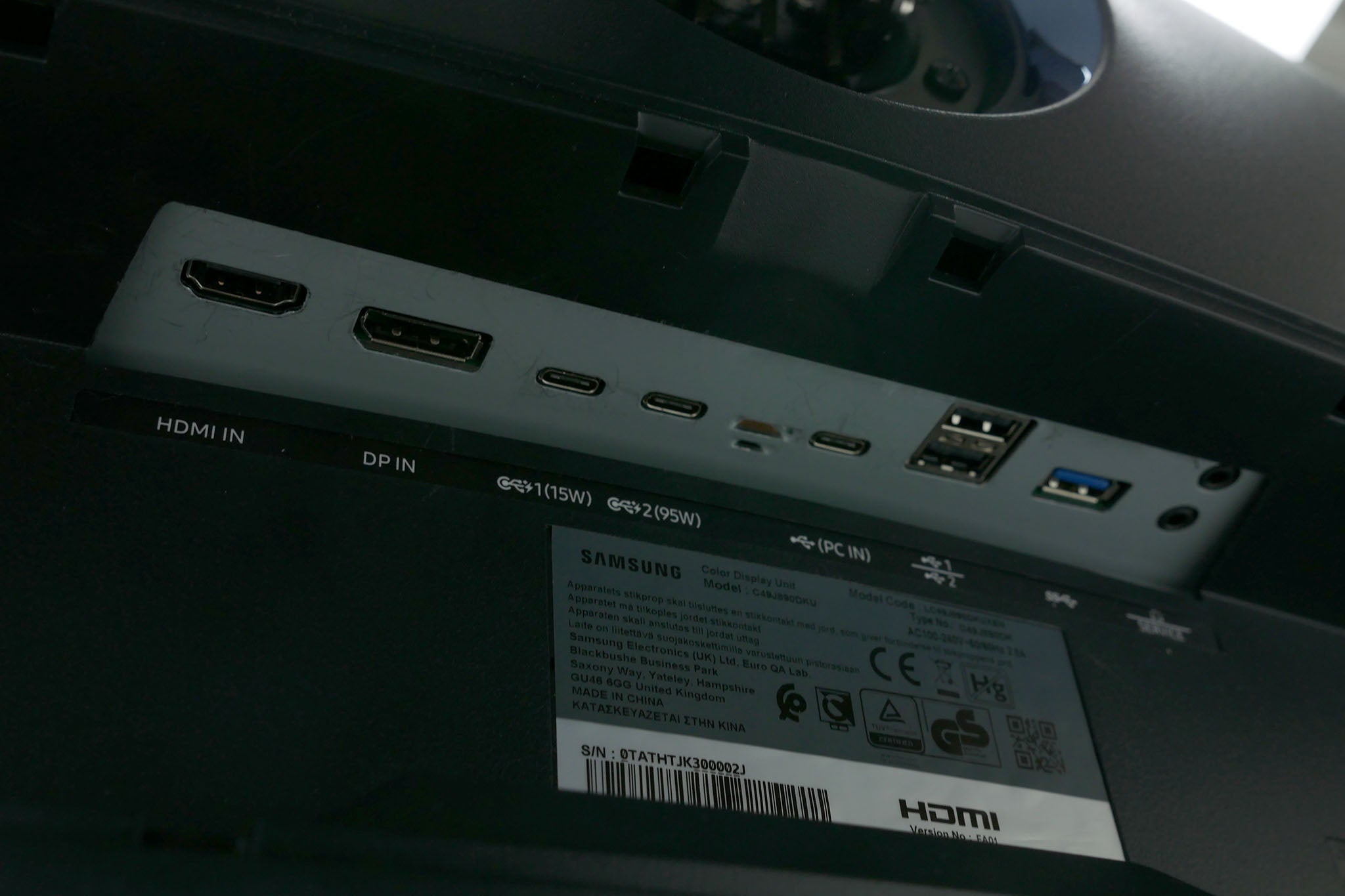 As mentioned, setup of the C49J89 can be quite the undertaking due to its size and awkward connectivity. What’s more, working out how to get everything connected up to enable the KVM functionality is a bit of a brainteaser too.

With so many different USB ports from which to choose, and with two of those ports also providing video, it takes a while to work out what combination works. Moreover, you only get one DisplayPort, one USB-to-Type-C and one Type-C-to-Type-C cable in the box. As such, for many conventional two-PC setups, you won’t have the right combination of cables to get things working.

It also seems odd that there’s only one DisplayPort and two HDMI. For setting up two conventional PCs, two DisplayPort would have been more convenient and intuitive.

Regardless, once setup the KVM largely works well. You can switch directly between both PCs in full-screen or have the two video feeds configured side-by-side (or picture-in-picture) then just swap the USB control, both at the touch of a button. It takes a few moments for everything to switch over, but it works reliably. 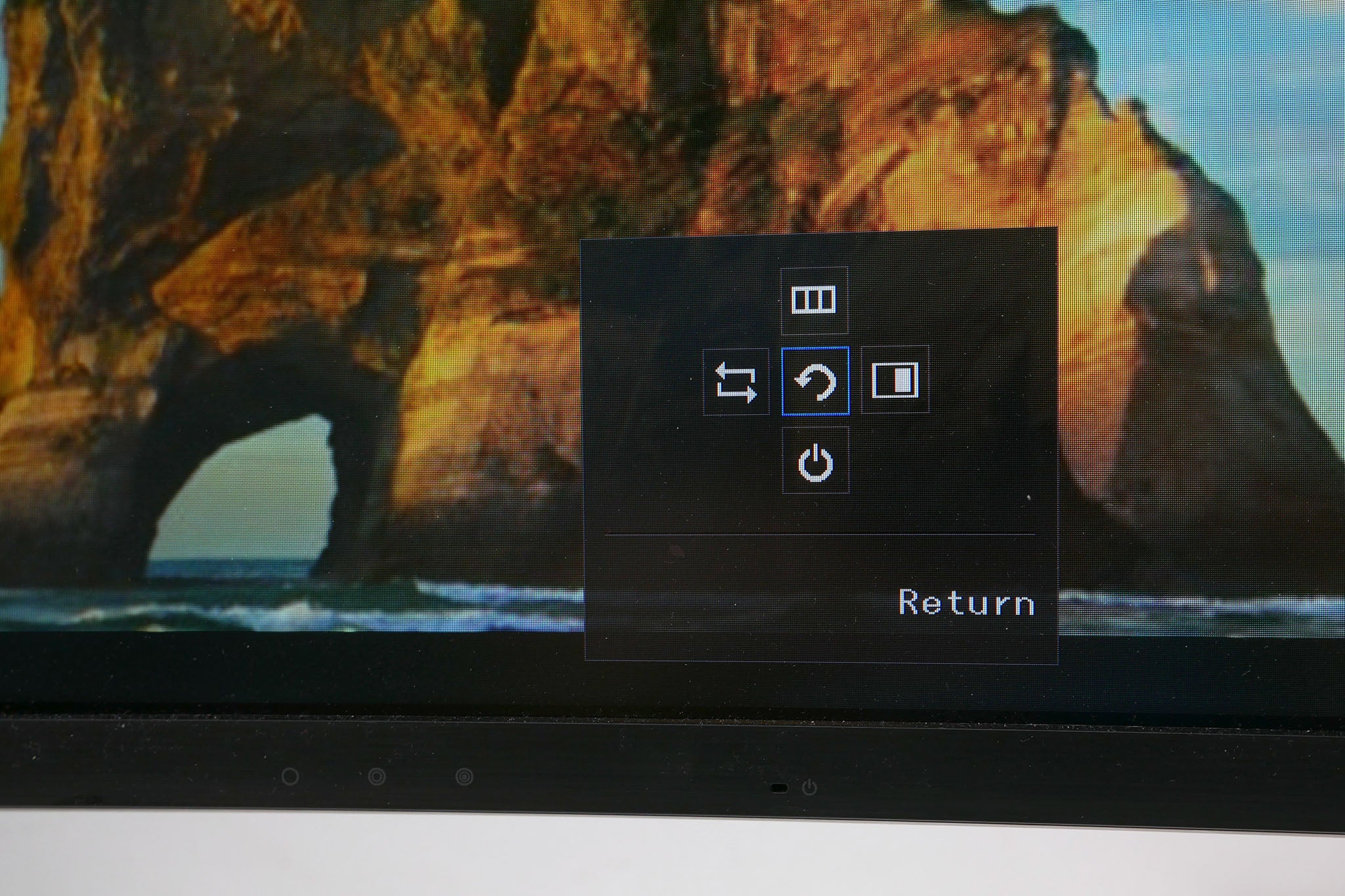 There are a couple of gremlins, though. The first is that the backlighting on the keyboard wouldn’t work through the KVM, or at least it wouldn’t work consistently. The whole input selection and switching over is also a little clunky, with you having to wait quite a while for the system to workout which inputs are being used.

Once setup, switching between PCs, engaging PBP or PIP, and switching USB controls is achieved via three buttons on the underside of the frame, making the KVM feature genuinely convenient.

For actually setting up which inputs you’re using, however, you’ll need to jump into the source menu, which is controlled by a mini-joystick just to the right of these three buttons. 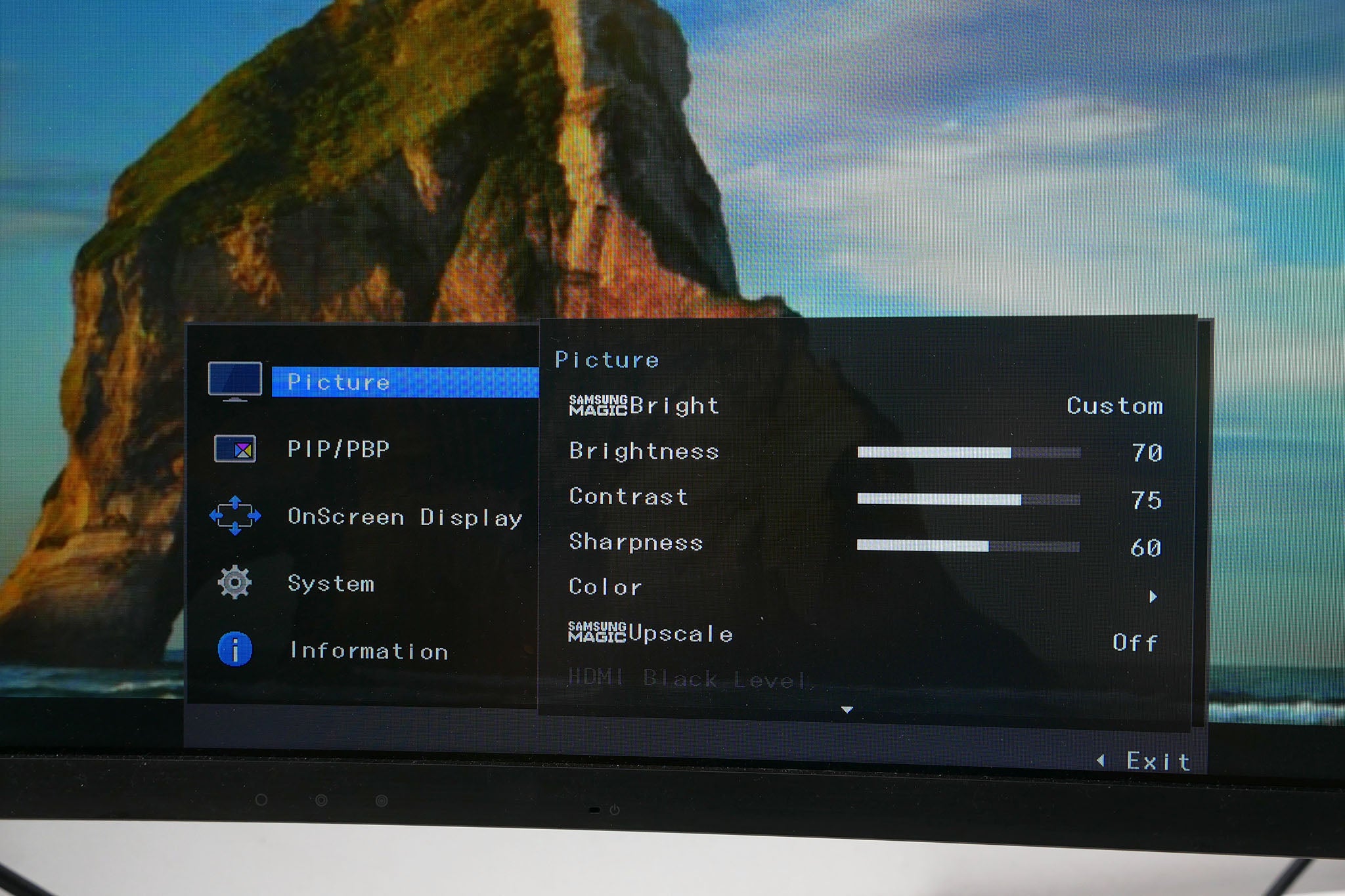 This also gains you access to the full menu system and it’s a simple and responsive control system and the menus themselves are clear and easy to use. From top to bottom, the Picture menu includes brightness, contrast and colour balance options. The PIP/PBP menu provides all the options you need for configuring which sources to use, the size of the windows, their aspect ratio, the sound source, and USB sources.

Next is the OnScreen Display menu that provides the usual options to change the position, language and transparency of the menu. Then it’s the System menu, which includes quite a few extra features such as the USB source setup, DisplayPort and HDMI modes and the option to switch to manual source selection.

Finally, the information menu displays items such as resolution, refresh rate and serial number of the display.

It’s all very perfunctory, with no extraneous extra game modes or bizarre colour profiles, making setup of everything as easy as possible.