Samsung’s C24FG70 might just be the monitor gamers have been waiting for. With a ridiculous array of specifications and sub-£300 price point, it is, on paper, one of the best mid-range gaming monitors yet.

From a technical standpoint, it’s hard to fault, but you’ll have to consider what you really want from a gaming monitor before you splash out.

You wouldn’t guess this was a gaming monitor based on its styling. The stand and frame are plain black, without any of the gaming excesses you’d expect from other brands. This is particularly handy for people who don’t consider themselves to be gamers, but want a quality piece of stealthy gaming  kit when the spreadsheets are finished for the day. 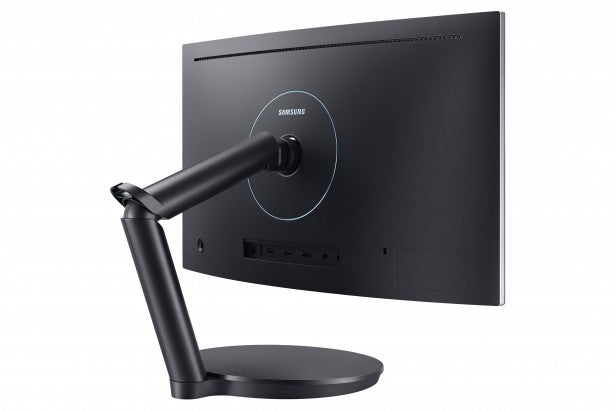 The only piece of clear premium styling is the ring of silver around the stand mount on the back of the screen. It looks good, but it would’ve been nice to see a little bit more from what is one of Samsung’s flagship products.

The most interesting external feature is the stand, which takes the form of an articulated arm. It looks fantastic and futuristic, although it won’t be practical for everybody. Because it sticks out so far back, you’ll have to place the monitor further from the wall than you would a screen with a simple vertical up-down height adjustment. Its articulation also means that, as you raise the screen, it gets farther away from you.

To an extent, this makes sense. If you’re sitting up to play a game you probably don’t want the monitor to be right in your face. Similarly, if you’re leaning back to watch a video, you might want the monitor both lower and closer. Whether it’s right for you will be down to your desk setup, but I didn’t find it as useful as I thought I would. 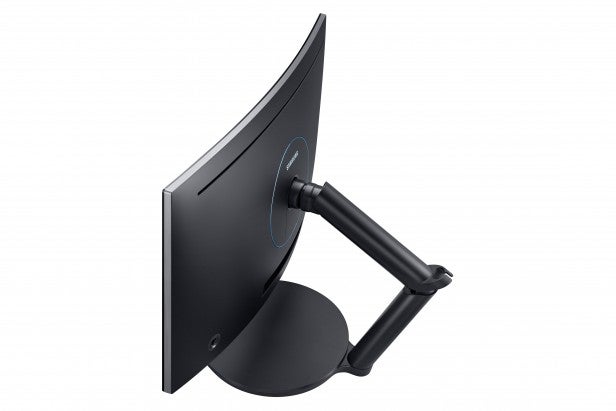 The screen can also be twisted into portrait mode, if you happen to like vertical curves.

If you dislike the stand, Samsung supplies a VESA mounting plate in the box so you can connect it to your own stand or mechanical arm.

Assembly is relatively simple, although you will need a screwdriver or a thin coin handy to attach the base to the bottom of the stand with the two screws provided.

Samsung has packed a lot of technology into this screen, making it one of the most interesting panels released in the last few years. I’ll evaluate each feature in turn on the next page.

First, the basics: this is a 24-inch Full HD panel. It’s also available as a 27-inch version, but Samsung hasn’t announced a release date for this. The Full HD resolution means you won’t need a high-end graphics card to make the most of it, especially if you’re playing games such as MOBAs and RPG titles. 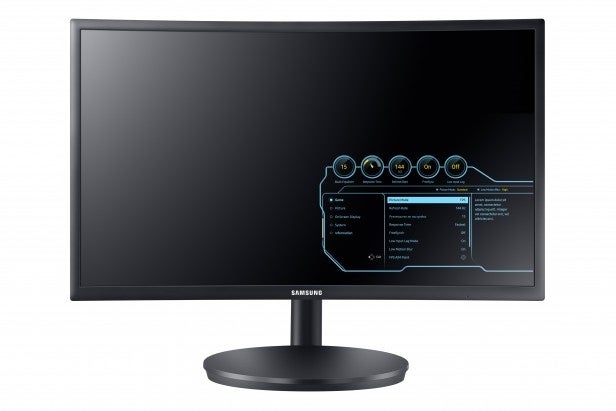 Next, chuck in the 144Hz refresh rate, which is the single best way to make gaming feel smoother and more responsive. The monitor is also compatible with AMD FreeSync. This means if you have an AMD graphics card, games will run even smoother, without any frame tearing if you choose to enable it.

Colours are produced by a VA (vertical alignment) LED panel with a Quantum Dot layer sitting in front of it. You might have heard about Quantum Dot in the world of TVs recently, and this is the first monitor I’ve seen with the technology on board. You can read more about them in our Quantum Dot explainer, but here’s the quick version: the quantum dot panel in front of the LEDs results in more accurate, vibrant colours and higher peak brightness levels without compromising the deep, inky blacks that VA panels are known for.

Finally, there’s that curve. It’s a 1800R curve, which means if you had enough monitors to place them in a circular formation, the circle would have a radius of 1.8 metres. 1800R is the tightest monitor curve I’ve seen so far, but I’m not convinced it’s particularly useful on a screen this small. 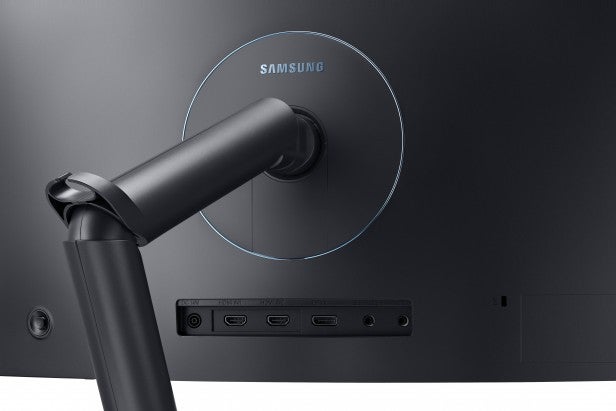 In terms of inputs, there are two HDMI 2.0 ports and a single DisplayPort 1.4 connector placed around the back. They’re easy to access because they point outwards instead of downwards. There’s also a pair of 3.5mm audio jacks – one for plugging in headphones and one that’s used exclusively for maintenance. There’s no USB hub, though, which is slightly disappointing.

One gaming-specific feature Samsung has included in the design is a white LED that lights up the base of the monitor. If you want, you can switch on a mode called ‘Arena Lighting’ that automatically flashes and dims the light based on game audio that’s playing. This means explosions and gunfire will activate it, supposedly to increase the immersion. While it’s a cool feature, there are drawbacks. You’ll need to have the monitor set as your PC’s primary audio output, but because there’s only a 3.5mm audio output, you won’t be able to use your USB gaming headset at the same time.