January’s CES demonstrated that 2009 will be the year when Blu-ray finally fulfils its potential thanks to a new wave of players equipped with all sorts of exciting innovations. For starters, most of the players coming out this year are BD Live enabled, leaving behind the annoying Profiles nonsense that has blighted the format’s take-up since day one. Furthermore, companies like LG have taken web connectivity one stage further by incorporating video-on-demand access, as we witnessed recently with the marvellous BD370.

Another company pushing the envelope this year is Samsung, which storms back onto the scene with two new standalone BD Live players, the BD-P3600 and BD-P4600. We’ve got our hands on the latter, which has the distinction of being the world’s first wall-mountable Blu-ray player. But while the ability to wall mount the BD-P4600 is the obvious headline grabber, from a technological perspective it boasts some arguably more significant developments, which we’ll discuss in due course. 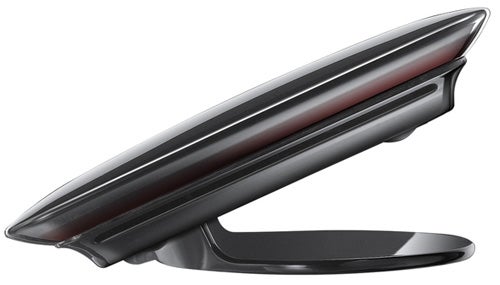 The BD-P4600’s wall mountability is reflected in its rulebook-rewriting design, which makes it the most jaw-dropping hi-def deck around. With its slim 1.5in profile, elegantly curved bodywork and piano black finish infused with charcoal grey highlights and translucent edges, the BD-P4600 is beautifully unique and will no doubt draw looks of pure envy from anyone who claps eyes on it.


On the deck’s front panel is a row of touch-sensitive buttons, which ups the wow factor even further, and a small display panel that shows the elapsed time. Build quality is a bit plasticky but we’ll cut Samsung some slack given that lightness is a virtue on a wall-mountable player. 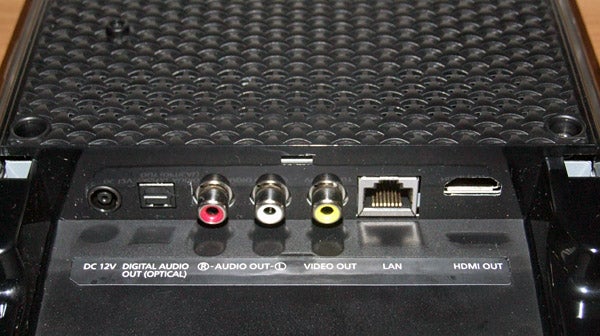 The necessary brackets are supplied in the box, but if you don’t fancy wall mounting then you’ll also find a screw-on stand that props the player up at a 25 degree angle, which looks equally stylish.


Flip the player over and you’ll find a limited array of sockets, which is hardly surprising given the lack of space on the back. There’s an HDMI output, an Ethernet port, an optical digital audio output and composite video/stereo audio outputs, but there are no multichannel analogue outputs or component video outputs.

There are also two USB ports, which can be used to connect flash memory devices and play back DivX, MP3, WMA and JPEG. It’s also the first Blu-ray deck we’ve tested that plays DivX HD movies, which is a real bonus.


But these USB ports have a much more interesting purpose – you can plug in the optional 802.11 b/g/n USB WiFi dongle and connect to the Internet wirelessly instead of using the Ethernet connection, which is yet another Blu-ray first. Sadly Samsung didn’t supply one for us to try out, but the Ethernet connection works a treat.


And on another USB-related note, the BD-P4600 is also the first Profile 2.0 player we’ve encountered that doesn’t need a USB stick to store updates and downloaded movie content, thanks to the 1GB of built-in memory – although you can further expand the memory using a USB stick if you wish.

However, unlike the LG BD370 the BD-P4600 doesn’t offer YouTube access or other online content streaming. It’s a shame, as the US version of the BD-P4600 allows users to stream movies from Netflix and music from Pandora, but there’s no such functionality on the UK version.


Elsewhere, the BD-P4600’s feature list is solid. Not only can it pipe Dolby TrueHD, DTS HD Master Audio and Dolby Digital Plus soundtracks to an AV receiver in bitstream form, but it can also convert them to uncompressed PCM for playback on HDMI-equipped receivers without HD audio decoding. The deck also supports 24fps output and upscales DVDs to 1080p.


The player does, however, share its Korean counterpart’s quick disc loading times. Slide ”Spider-Man 3” into the side-mounted slot and it gets to the first welcome screen (after the spider ‘loading’ logo) in 28 seconds, which is quite an improvement on Samsung’s last deck, the BD-P1500. It’s also a lot quicker to scan through discs and skip chapters than its predecessor. 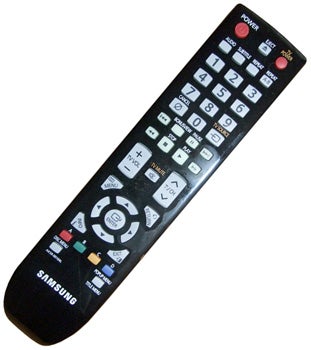 In fact the entire user interface is magnificent. The responsive main menu screen has been slightly tweaked since the BD-P1500, with a slightly different colour palette and layout, although the vertical row of options (Video, Music, Photo and Setup) with the submenus coming off the side remains the same. This screen can also be used to search the contents of a connected USB device.


The BD-P4600 has also been treated to a brand new remote, which features an alluring gloss-black finish and is a vast improvement on Samsung’s previous zappers. Taking its cue from Panasonic’s ultra-simple remotes, the Samsung version features big, chunky buttons, foolproof labelling and an intuitive layout, which makes Blu-ray browsing a painless process.

The BD-P4600 also delivers some rewarding hi-def pictures, demonstrated by its handling of ”Wall-E”. From the opening frames, the deck’s impressive detail reproduction is clear to see, with the minute pieces of litter and textures within the tall piles of rubbish looking pin-sharp and punchy. The scuff marks and scratches on Wall-E’s battered body and tyre tracks on the ground are also rendered with pleasing clarity.


The Samsung handles colours with a deft hand, conveying shading and gentle tones (such as EVE’s glossy white bodywork) smoothly and without banding artefacts, but it’s also able to imbue stronger colours with deep, strong saturation that lends a warmth and vibrancy to the overall picture.


That said, the overall depth and sharpness of the image isn’t quite as impressive as some other players on the market, and movement isn’t particularly smooth – the camera pans across the landscapes at the start of chapter 2 reveal some fairly intrusive juddering with the output set to 24fps and viewed on a TV with 5:5 pulldown – but it also occurs with 24fps turned off.

We also checked out ”The Dark Knight”, and the scene in which the Joker blows up Gotham City Hospital doesn’t knock you for six as it does on the best players, but it still offers a clean, radiant presentation. Onto the Silicon Optix HQV disc, and it instantly detects the correct cadences on the Film and Video Resolution Loss tests, and reproduces the rotating bar patterns with minimal feathering and stepping along the edges – it’s not flawless but smoother than some budget decks. The shot of the stadium again judders slightly and shows some minor flickering.


DVD playback is fine, with high levels of colour and detail and solid blacks, plus it keeps noise to a minimum. Sonically there are no qualms either, as the player’s glitch-free HDMI Dolby TrueHD bitstream output results in an engaging and highly detailed sound, while with stereo CDs it makes up for its lack of refinement with sheer gusto.


With the BD-P4600, Samsung has created the most distinctive-looking Blu-ray player to date, with a gorgeous wall-mountable design that will please those who like their players to look as good as the pictures they provide.


There’s much to admire on the inside too, such as WiFi support and built-in memory, which makes it easier than ever to experience Blu-ray’s interactive extras, while the swift disc loading times and wide-ranging format support are added bonuses (although video-on-demand would have been the icing on the cake).


And although its picture quality isn’t quite up there with the best, it’s good enough to make the Samsung seem like money well spent – but it might be worth waiting to see what else LG and Panasonic have up their sleeves before making your decision.