Samsung was the first company to launch a Blu-ray player in the UK, but the BD-P1000 didn’t go down too well with the home entertainment cognoscenti – its spec was severely limited, with no HD audio or 24fps support, and because it converted 1080p pictures to 1080i and back again, the resulting picture quality left a lot to be desired.


So the BD-P1400 is Samsung’s chance to make amends. This time round all of the key features missing from its debut deck are now present, but at a much lower price. Look online and you can find the BD-P1400 for under £260, which highlights that the price difference between Blu-ray and HD DVD is no longer the gaping chasm it once was.


It’s not just the spec that Samsung has improved – the design has also been radically changed. We’re completely smitten by the deck’s all-over gloss black finish, sloping fascia, subtle blue lighting and a silver strip along the bottom, all of which makes it a stunning piece of kit that will grace any room. On the downside it’s not as slim as its predecessor, but with looks as good as these we really don’t care. 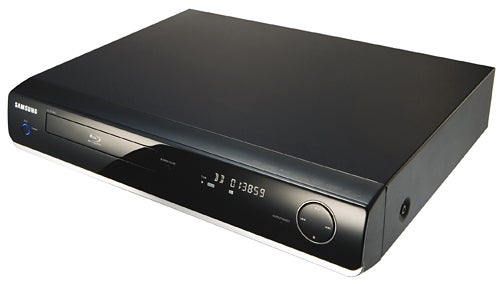 Samsung has also upped the connections count. This time the player comes with a LAN Ethernet port, which is extremely rare among Blu-ray players, but don’t get too excited – it can only be used for making firmware updates from Samsung’s online FTP site and not to access online content or to transfer digital files from a PC. The BD-P1400 is a Profile 1.0 player and not 1.1, so it won’t support advanced features found on forthcoming BonusView Blu-ray discs like ”Resident Evil: Extinction” – and like all Profile 1.0 players (with the exception of the PS3) it can’t be upgraded to 1.1. On the rear panel you’ll also find an HDMI 1.3 output, component, composite and S-video outputs, plus optical and coaxial digital audio outputs.


The player supports Dolby True HD, Dolby Digital Plus, Dolby Digital, DTS and DTS HD (but not DTS HD Master Audio), any of which can be decoded internally and output from the 5.1 analogue audio sockets or transferred to a receiver as PCM via the HDMI output. The HDMI output can also pipe HD audio soundtracks as a raw bitstream to a home cinema receiver, allowing the receiver to do the donkey work (provided it’s equipped with suitable decoders). But if your amp is getting on a bit, remember that Dolby Digital and DTS soundtracks can also be transferred from the digital audio outputs.

Another bonus of the HDMI output is that you can take advantage of CEC technology (dubbed Anynet+) which lets you control the player with a Samsung TV remote, and automatically powers up the TV when the player is turned on.

The menu system is beautifully presented in hi-def with jazzy colours and fonts, but it does dither slightly as you move through the options. Samsung sticks with its usual stylish, slim remote design, which can be fiddly to use at times but features generally sound button placement, particularly the direction controls. Proper backlighting would have made it even better though. The disc loading time is relatively quick, getting our ”Déjà Vu” Blu-ray disc up and running in under a minute, which is still a long time but a huge improvement on the snail-like BD-P1000. It does take longer with Java-heavy menus found on discs like ”Spider-Man 3”.


Watching this dumb Denzel Washington time travel flick on the BD-P1400, it’s clear that Samsung has ironed out the picture problems that blighted the P1000. The inclusion of pure, uncompromised 1080p output brings a crispness to the picture that really draws you into the screen, and there’s no noise to get in the way of its exceptionally sharp and fine detail reproduction.


Take for instance the aerial shots of hurricane ravaged New Orleans. The ruined houses and debris are rendered with pin-point accuracy, helped along by a superb black level that gives the picture a tremendous sense of depth. Colour reproduction is powerful yet natural, making the picture look dazzling without being garish or artificial.

There’s one small grievance to report. With the player set to output 1080/24p (displayed on a 24fps-capable Toshiba 52Z3030 with 5:5 pulldown), the picture suffers from an occasional stutter but it’s not a major problem.


The deck’s DVD upscaling is solid, with ”Superman Returns” looking suitably detailed and artefact-free. The spectacular scene in which Superman brings a plane down to land in a baseball stadium is vibrant and contains a decent amount of detail.

Not only are we impressed by the deck’s ability to decode three of the four HD formats, but also by its general sound quality. We hooked up the BD-P1400 to the 5.1-channel inputs of our receiver and let it rip with ”Déjà Vu’s” 5.1-channel PCM soundtrack, and the results were spectacular. The constant barrage of explosions, car crashes and gun shots are delivered with real kick, while bread-and-butter audio elements like dialogue and music are also delivered with pleasing clarity. CD playback is also warm and inviting, though in operational terms it’s very slow to select a track due to the long pause after pressing the button.


The BD-P1400 is a marked improvement on the BD-P1000 in terms of design, performance and features and is superior to the feature-light Sony BDP-S300. But the Samsung’s Profile 1.0 specification will make it outdated very quickly, and for this reason we reckon it might be a better idea to hold out for a Profile 1.1 deck, the first of which are being launched later this year. But if you absolutely have to buy a Blu-ray deck now, and you’re not bothered about BonusView, then you could do a lot worse than the BD-P1400, particularly when you consider its very reasonable price tag.