It’s a 3D-capable Blu-ray player, 1TB Freeview HD PVR and network streaming device all rolled into one. Sitting at the heart of your home cinema system, this slim deck can access HD content from Blu-ray discs, Freeview, network servers and video streaming apps, as well as recording TV shows onto it capacious 1TB hard disk.

At over £300 it’s pricier than your average Blu-ray deck, bit with so much added functionality – not to mention a new multiroom feature for 2014 – the BD-H8900 really does cram in a lot for the money. 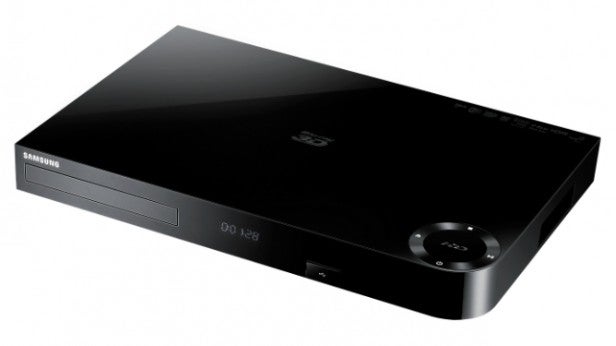 The BD-H8900’s design is practically identical to last year’s BD-F8500, again using a distinctive curved right-hand corner to communicate a sense of elegance and modernity. As ever the gloss black finish is sleek and stylish, blending perfectly with Samsung’s black TVs, and its slim bodywork slips easily into an AV cabinet.

The controls are arranged inside the curve on the top panel, include open/close, play/pause, stop and power. They’re touch sensitive too, which is always cool. A USB port allows you to play media from flash drives. The LED display is fairly small and could do with being bigger and brighter.

The BD-H8900’s bodywork has a disappointingly flimsy, plasticky feel. It
lacks the heft and solidity of high-end players from the likes of
Cambridge Audio and OPPO, but those are more expensive models – for the
money the BD-H8900 is probably as good as you could expect.

Rear connections include an HDMI output, an Ethernet port, optical digital audio output and a second USB port that lets you hook up an external HDD for extra recording space.

OId-school users might be disappointed by the lack of a Scart output, which would allow you to watch the Samsing on older TVs without HDMI inputs or to copy HDD programmes onto Blu-ray or DVD, but most buyers probably won’t be bothered by that.