Samsung has revamped the onscreen menus for 2014, although it’s more of a subtle tweak than a full-on overhaul. The Home menu is your jump-off point for any function, broken down into four sections – Play Disc, Films and TV Shows, Multimedia and Apps. Each section is represented by a large panel containing stylised illustrations (as opposed to actual cover art). It’s easier on the eye than last year’s over-simplified design. 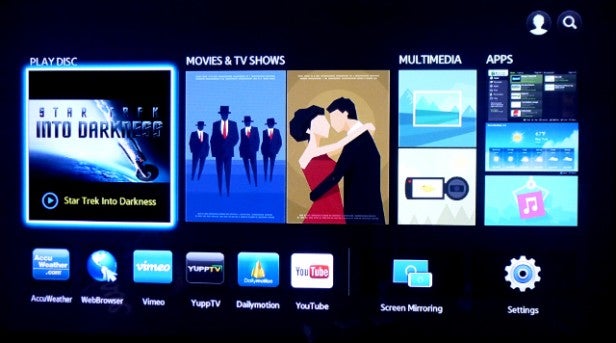 The row of recommended apps running along the bottom provides quick access to popular content, as well as icons for Screen Mirroring and Settings.

The Films and TV Shows menu presents a range of movies available from on-demand services (illustrated by their poster art), providing cast/crew details and related content, although none of the content we selected was available to watch – we could only post about them on Facebook and Twitter or favourite them, which seems pointless. 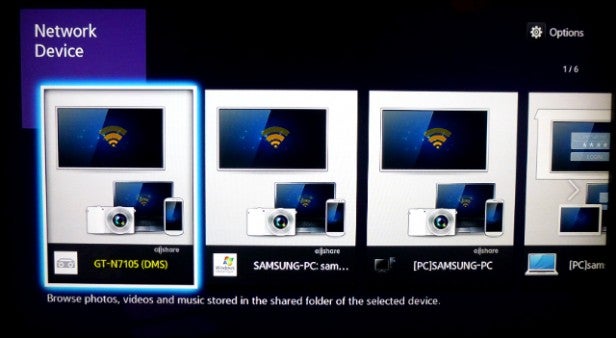 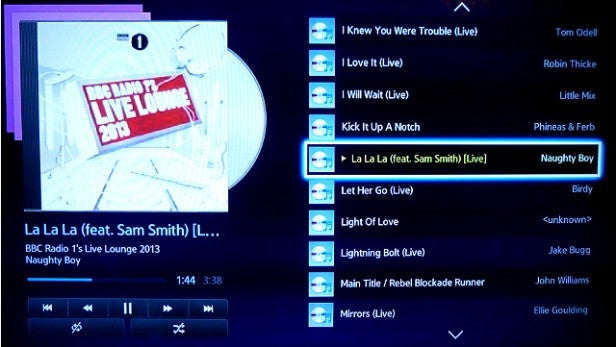 The Multimedia menu displays content stored on networked servers, USB drives and cloud storage. The first screen shows all the connected devices, followed by series of folders until you reach your content. To make the most of network streaming you should upload music to the online sharing software Samsung Link, as it supports a wider range of formats than Windows Media Player. It works smoothly, but it’s a pain to set up and took nearly half a day’s use before our Samsung Link-registered PC appeared in the list of devices. 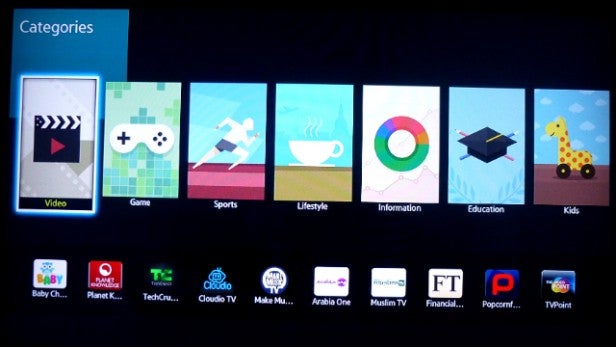 Samsung Apps lets you browse and download online content. Downloaded apps are presented in a simple grid – nothing fancy but easy to digest. You can browse content in the Most Popular and What’s New sections or by category – the latter’s selection screen uses more of those lovely stylised illustrations.

In terms of operation the BD-H6500 is super fast. It boots up in under 10 seconds, and when scanning Blu-ray discs or skipping chapters it happens instantaneously, with no long pauses like the Samsung decks of old. The cursor also moves around the menus sharply, while apps like BBC iPlayer load up in seconds. It’s a slick, satisfying user experience. Only the web browser lets the side down – navigating around the onscreen links with the remote is cumbersome (you can connect a mouse and keyboard if you can be bothered).

Disc loading is even faster than last year’s models, loading the clunky, Java-heavy Terminator Salvation disc in just over 20 seconds. Less complex discs start playing almost as quickly as a DVD, which is impressive.

The remote is classic Samsung fare – nicely sized and ergonomic, with clearly-labelled rubber buttons organised into distinct sections. The playback keys glow in the dark too.

There are no such niggles with movie playback however. The opening scene of Star Trek Into Darkness on Blu-ray looks absolutely stunning – as Kirk and Bones leg it through the undergrowth from the Nibiru natives, deep and vibrant shades of red and yellow burst from the screen. The varying red tones on the ground and amid the layers of vines are smoothly and subtly blended too, giving a convincing impression of depth and three-dimensionality.

The image is wonderfully sharp and solid, and every shot is packed with detail. From wide, CG enhanced shots of futuristic London right down to facial close-ups and textures of clothing, the BD-H6500 renders fine lines and textures with pin-sharp clarity.

Its superb contrast range makes the image look solid and filmic, so when JJ Abrams casts his lens across space, the white Enterprise stands out sharply against the profound blackness. Dark cityscapes and dingy interior shots also look clear and punchy.

3D pictures boast the same superb detail, natural colours and deep contrast, but with the added benefit of stereoscopic depth and layering, all competently passed on by the Samsung. Edges are tight and definite with no obvious bleed or ghosting, and objects move around the screen smoothly.

Other video sources – such as hi-def programmes streamed from BBC iPlayer or MKV files – look similarly impressive, while DVDs look clear and bold with acceptable levels of edge stepping and block noise. 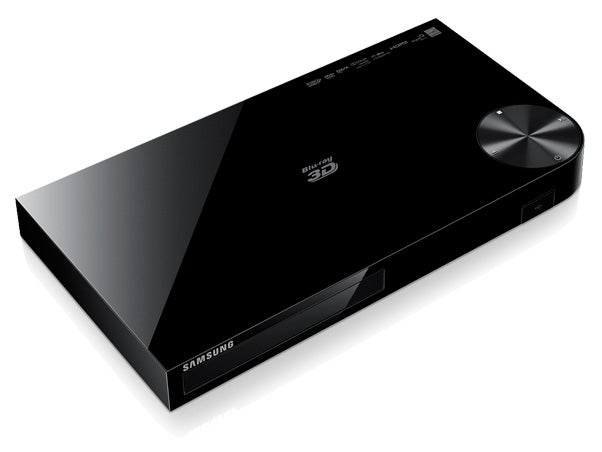 Splash out on the BD-H6500 and you won’t be disappointed. Not only does it look the part in its slim, stylish casing, but it’s packed with features and operates like a dream. Samsung’s online content is still second to none and DLNA file streaming works well.

The onscreen menus have been improved, making the user experience even slicker than its predecessor, and it’s backed up by dazzling picture quality from Blu-ray discs.

However, build quality isn’t great for the money, and aside from the revamped menus and addition of multiroom support – which admittedly will be a brilliant feature for those who have invested in Samsung’s M7/M5 speakers and Hub – the BD-H6500 doesn’t offer a great deal more than its predecessor, the Samsung BD-F6500. That could persuade some buyers to save cash and seek out the earlier model.

But none of this stops the BD-H6500 being a brilliant Blu-ray player in its own right, and is well worth a look if you want a slim, Smart hi-def deck for the lounge or bedroom.

Build quality aside, the BD-H6500 is a brilliant Blu-ray deck that boasts a bevy for features for a tantalising price.