The BD-F8500’s 500GB hard-disk holds around 124 hours of high-definition programmes or around 200 hours of standard definition. If that’s not enough, then you can upgrade to the BD-F8900 which packs a 1TB HDD.

When recording, it’s remarkably flexible – with twin Freeview HD tuners you can record two channels simultaneously while you watch a third. This is a real bonus given how many channels there are to choose from. You can also browse web content and carry out pretty much any other task while two recordings are in progress. These multitasking talents are made possible by the dual-core processor under the bonnet.

The BD-F8500 is called a Smart PVR because of its internet and networking features, but it’s pretty smart on the Freeview side too. With series recording, clash alerts and the ability to shift start/stop times when programme schedules change, the BD-F8500 makes sure you don’t miss your favourite programmes. There’s a handy Schedule Manager to keep tabs on upcoming recordings and shows that have already been recorded. You can also pause and rewind live TV.

On the Blu-ray and networking side, the BD-F8500 boasts an identical feature list to the BD-F6500, which means it lacks the 4K upscaling found on the BD-F7500. Aside from that though, the BD-F8500 is an astonishingly well-specified deck, offering a wide range of internet content through the Smart Hub portal and allowing you to stream files using the AllShare DLNA feature. 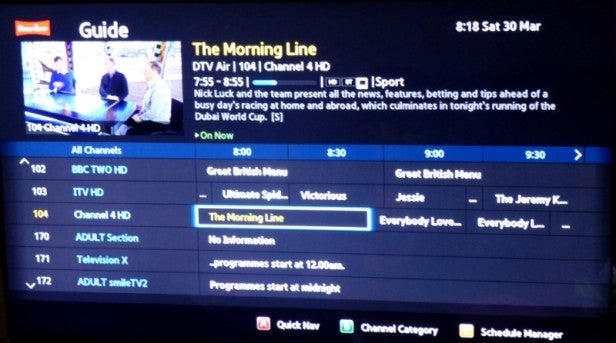 We’ve explored these fully in our reviews of the BD-F6500 and BD-F7500, so we won’t go into too much detail, but the ‘Apps’ section boasts a impressive array of internet content, including BBC iPlayer, BBC News, YouTube, LoveFilm, Netflix, Facebook, Twitter and Blinkbox. ITV Player, 4OD and Demand 5 weren’t available on our sample as they still being tested, but Samsung says they will be available by the time the unit goes on sale.

On that note, it would be nice to see tighter integration of the Freeview EPG and catch-up TV services, to mirror what Humax is doing with its YouView boxes. 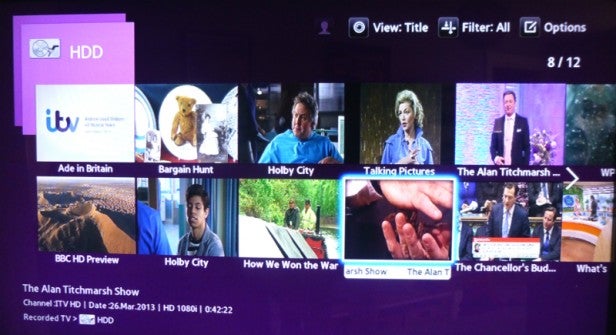 You’ll find loads of other video, lifestyle, educational apps and games in the Samsung Apps section, where you can download any that take your fancy. A Social TV feature lets you post about TV shows as you watch them on Facebook, Twitter and Google Talk.

‘Movies & TV Shows’ is an on-demand service powered by Samsung’s Video Hub and Acetrax Movies, which is beautifully presented and offers a decent selection of movies. At the time of writing the app server was still in development, which caused a few problems when selecting movies, but when it’s up and running this could be a popular feature. 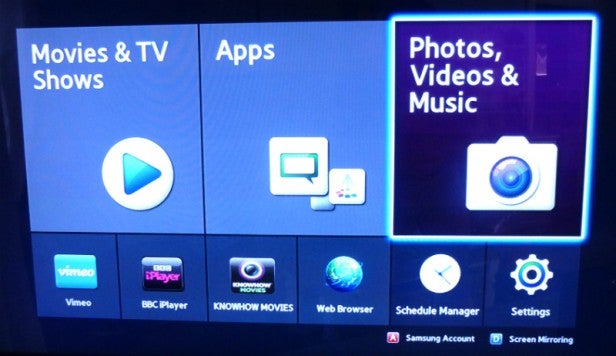 Using AllShare (which is labelled ‘Photos, Videos & Music’ on the home menu) you can stream files from PCs and other servers on your home network, but works best with Samsung’s Allshare software installed on your PC – we tried it using Windows 7 and it wouldn’t stream MKV, plus AVCHD, WMV HD and DivX HD streamed in a low resolution. With AllShare, everything streamed correctly. Other supported formats include MP4, 3GP, XviD, MP3, WMA, AAC, FLAC, OGG, WAV, APE, JPEG, PNG, BMP and MPO.

Elsewhere on the network front, there’s a built-in web browser, Wi-Fi Direct, smartphone control (with the Allshare Android/iOS app) and Screen Mirroring, which replicates your phone on your TV – handy for playing games on the big screen. You can also rip CD tracks to a connected USB device, which is handy if you don’t have time to boot up your PC.