There’s something undeniably appealing about a single product that does the job of several devices, as it cuts down clutter under your TV and could save you a bob or two in the process. Few companies can do this better than Samsung, whose HDD-equipped Blu-ray players not only do the job of a PVR, disc spinner and digital TV receiver but also throw tons of other features into the bargain, turning them into complete home entertainment hubs.


The BD-D8900M is the step-up version of the BD-D8500M we reviewed earlier this year. This unit doubles the hard-disk capacity of the BD-D8500M to 1TB, giving you about 240 hours of hi-def recordings from the built-in Freeview HD (DVB-T2) tuners, which even the staunchest couch potato would struggle to fill. And with built-in Wi-Fi, a host of network features, web content and 3D Blu-ray playback are on board too, could this be the best £360 you’ll ever spend? Let’s find out…

The BD-D8900 is a stylish unit, boasting Samsung’s familiar glossy black finish with eye-catching flashes of silver, but at 60mm high it’s a lot chunkier than Samsung’s non-HDD Blu-ray players. It’s covered in cool embellishments like a front display panel with illuminated touch-sensitive controls built into it, a front-loading disc slot and a window on top that shows the disc whirring round.

Drop down the front flap and you’ll uncover a couple of other goodies – a CI slot for pay TV smartcards and a USB port that lets you plug in memory devices (USB sticks, external HDDs). And on the back there’s an impressive array of sockets, most notably two HDMI outputs that allows owners of receivers without HDMI v1.4 inputs to enjoy 3D pictures and HD audio simultaneously – one output sends the 3D picture to your TV, the other sends audio to your receiver. That’s something only Panasonic’s flagship players have offered until now.

These dual HDMIs are backed up by component, composite, optical digital audio and analogue stereo outputs, as well as an Ethernet port and RF antenna input/loopthrough sockets. The only thing missing is multichannel analogue output for really old receivers, but that’s not crucial.

You can never accuse Samsung of skimping on features, and its generosity continues with the BD-D8900M. Our favourite of these features is Smart Hub, Samsung’s new web portal that brings a range of applications to your TV screen. Not only has the range of content been improved since last year’s Internet@TV system with the addition of BBC iPlayer, but also the presentation, which is gorgeous. The bright and breezy Smart Hub menu lays out its app icons in a grid, allowing you to put them into folders (useful if several family members want to keep their own content separate). New apps are added quickly and easily from the App Store. 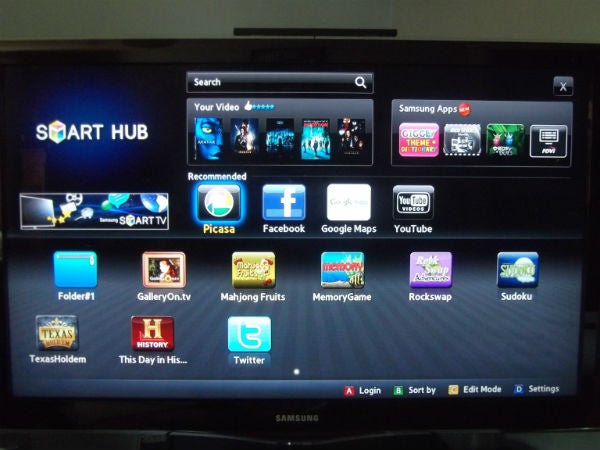 Also among the apps are Picasa, Google Maps, YouTube, Facebook, Twitter, BBC News and DailyMotion, alongside a wealth of lesser-known and specialist apps. You can also access loads of puzzles, games and children’s activities, making it a truly family-friendly feature. It’s still no match for Sony’s BRAVIA Internet Video, which provides more catch-up TV content, but not far behind.

The new Your Video feature lets you look up information about movies new and old, and gives you the opportunity to like or share those movies on social network sites, while the new search mode looks for content related to a keyword on Your Video, YouTube and Facebook, although it doesn’t search the Freeview EPG. 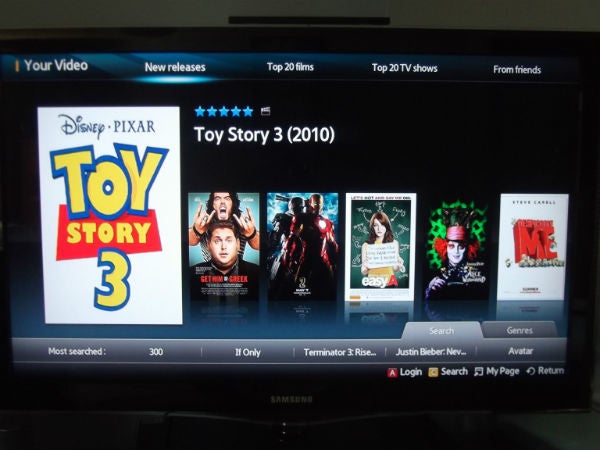 Next up is the DLNA AllShare feature, which allows you to stream content from networked devices such as PCs and NAS drives. Like previous Samsung products the list of supported formats is lengthy – DivX HD, MP3, WMA, MKV, AVI, WMV to name but a few – although it wouldn’t stream AVCHD (which can be played from disc). You can also play the same multimedia formats through the USB port and use the BD-D8900M to rip CDs onto the hard disk then copy them to USB or stream them if you wish. There’s no Blu-ray recording though, like Panasonic’s latest combis – this is a straight-up player.

Not only will the BD-D8900M play 3D Blu-ray discs, but it will also convert 2D pictures to 3D. That applies not only to Blu-ray discs and DVDs but also to Freeview programmes/recordings, Smart Hub content and videos streamed over the network or played from USB devices. You can alter the depth with settings from 1 to 10.

And on the digital TV side, there’s a decent array of features on board including dual Freeview HD tuners, which makes it possible to change channels while recording, but it’s hamstrung by its inability to only record one channel at a time. Elsewhere there’s Time Shift, which allows you to pause live TV or watch a programme from the start while it’s still being recorded.

There’s an eight-day EPG with series link and all the other broadcaster-controlled features common among PVRs. Series link is activated using polite dialogue boxes, and once set the Schedule Manager shows you all the instances when that particular series is being shown, along with all your other scheduled recordings.

In terms of operation, Samsung has really gone to town on this year’s Blu-ray products. You can clearly see its attempts to make the menus look and feel welcoming and straightforward through the use of brightly coloured graphics, large text and uncomplicated menu structures. It’s lovely stuff, the sort of onscreen design that doesn’t put you off using the product. Some menus drag slightly (particularly the DLNA menus) but the delays are far from infuriating. 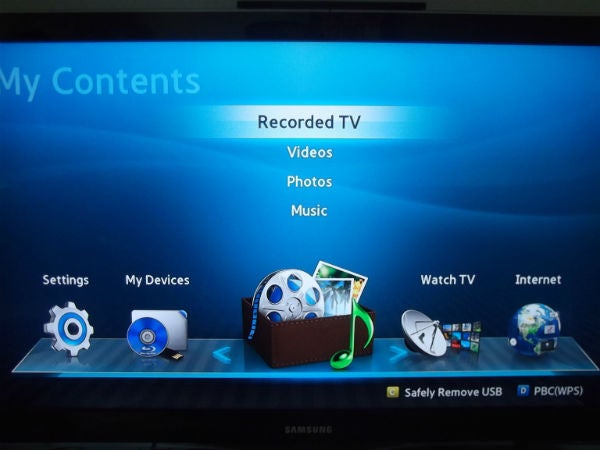 The main menu is the best of the bunch, using animated icons laid out along a platform, with corresponding options floating above. Everything, including USB and DLNA playback, HDD recordings, the EPG and Smart Hub can be accessed from here, as well as the all-important Settings menu, which again is a cinch to use. The Recorded TV menu lays out programmes in blocks with a thumbnail, and these can be sorted by name, date or channel. There’s a range of editing features too, allowing you to delete parts of your recordings using an intuitive onscreen editing tool, but accessing these features is very long-winded.

Also long-winded is the process of setting up your Smart TV ID for apps like Facebook and Twitter. What’s more, entering e-mail addresses and passwords using the onscreen keypad, which designed to look like that of a mobile phone, is convoluted, making you toggle through various pages of letters and switch between different text-entry methods. Thankfully you only have to do it once if you select the ‘remember my details’ tick box.

Elsewhere one of the main things that makes this deck pleasant to operate are the little dialogue boxes that pop up when there’s a conflict or something you need to know. Recording clashes, timer schedule changes – anything that happens, the deck will tell you about it. There’s even a helpful feature that lets you know when an SD programme you’ve selected is also being shown in HD. 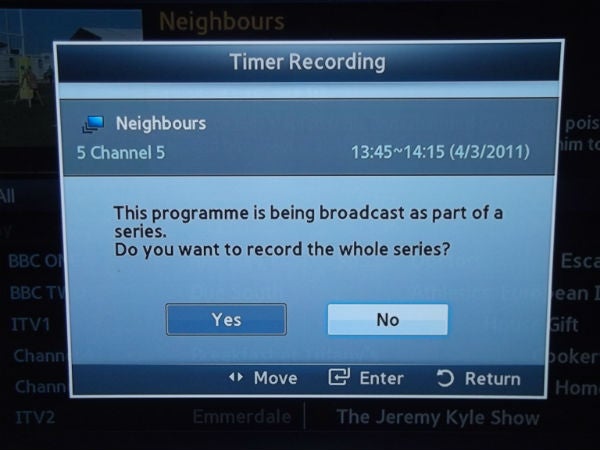 Selecting DLNA or USB content is simple too – the menus share the same layout as the Recorded TV display. Even the EPG is a design master class, squeezing a six-channel, two-hour programme grid, live TV box, programme synopsis and controls into a single screen without feeling cluttered. The only flaw is that you can’t read any of the programme names in the grid, which is a shame. 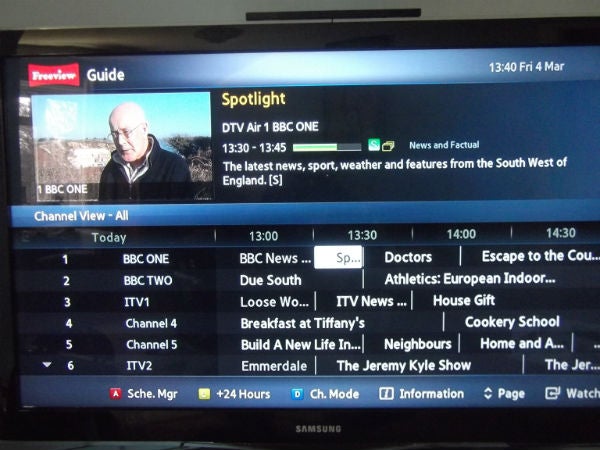 Hit the Info button while watching TV and you’ll see one of the best onscreen info banners around. The range of details on display is comprehensive, using coloured icons for things like aspect ratio, resolution, audio format, subtitles and Audio Description. What’s more you can browse the entire channel line-up and see what’s on days in advance. 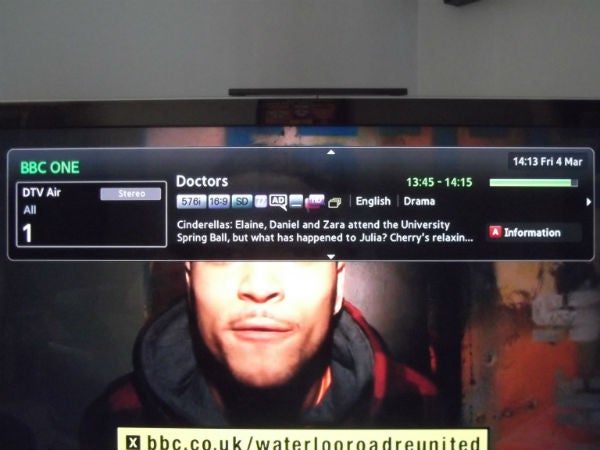 The whole shebang is controlled by a wonderfully user-friendly remote that sports large, tactile buttons, large lettering and a sensible layout. The playback keys even glow in the dark, and helpfully there are dedicated buttons for Smart Hub and 2D-to-3D conversion. Hit the Tools button and you’ll find more options, including a range of picture presets and a User setting that lets you adjust various picture parameters.

We can’t find a great deal of fault with the BD-D8900M’s performance. We tuned in to BBC HD’s Wimbledon coverage and it coped admirably with the fast-moving objects, even keeping track of the ball during Serena Williams’ super-fast serves.

Naturally for a hi-def channel there’s detail in abundance, delivered to our 1080p test TV without any significant artefacts like block or mosquito noise. The texture of the grass and scuffed baseline, the pattern of the net, faces in the crowd are all conveyed with pin-sharp clarity. Colours are deep and natural, with various shades and shadows on clothing and backgrounds looking smooth with no banding.

When recorded onto the hard disk, this splendid picture quality remains intact. The lack of recording modes, which on other machines allows you to dip the recording quality to fit more onto the disc, means that all recordings are in the best quality the deck has to offer, but with such a capacious HDD on board you shouldn’t have to worry about the space this takes up.

Standard definition channels also look strong when viewed live or recorded, with some evidence of block noise and feathering on fast movement but nothing to put your nose out of joint.

Blu-ray images look stunning. The crisp, clean digital transfer of pixels from disc to screen results in pristine images that only shows signs of noise if it’s on the disc. It takes fine details and textures in its stride, rendering them with dazzling acuity. And despite being viewed through active shutter glasses, 3D pictures look sharp and vibrant, but with the benefit of extra depth and distance, the effect of which is utterly absorbing.

We’re not so impressed by the quality of the deck’s 2D-to-3D conversion. We tried a few 2D discs and it failed to provide extra depth to the majority of scenes, with only a few obvious ‘floating object’ moments looking remotely like the real thing. But to be fair we’re yet to see convincing conversion tech from any manufacturer.

Verdict
All-in-all, the BD-D8900M is a wonderful advertisement for convergence, melding together various AV components into a slick, single-box unit. It’s positively bursting with cutting-edge features too, ranging from Wi-Fi media streaming to comprehensive Freeview functionality – not to mention a massive 1TB hard-disk. There are a few minor operational drawbacks, such as the cumbersome text-entry system and the inability to record two channels simultaneously but on the whole it’s a highly impressive home entertainment hub that leaves few stones unturned.