We recently reviewed the Samsung BD-D8500, a Blu-ray player with a built-in twin-tuner Freeview HD PVR, but here we’re taking a look at its stripped-down sibling, the BD-D6900. This 3D-ready Blu-ray deck comes equipped with a single Freeview HD tuner and no hard-disk drive, but aside from that, it offers all the features that made the D8500 so alluring, including DLNA networking and access to Samsung’s shiny new internet portal, Smart Hub.

Without full PVR functionality, it’s hard to pin-point this product’s audience. It’ll probably appeal to people who like the idea of getting hi-def TV and Blu-ray from the same box but don’t necessarily need to record anything – perhaps for watching movies and TV in the bedroom. However, the BD-D6900 does support recording onto external HDDs via the USB port, so a recording option is there if you want it.

Feature list aside, one of the BD-D6900’s greatest assets is its stunning design, which is a million times more stylish than the BD-D8500. That’s largely because Samsung has tarted it up with a silver top panel that perfectly complements Samsung’s 8000 and 9000 series 3D TVs, nicely contrasted by the black finish below.


At 33mm, it’s also impossibly slim, and you’ll find the same display panel that graced the 8500, with a row of touch sensitive controls and disc slot built into it. This works brilliantly, compressing everything into a small area and leaving the rest of the fascia uncluttered. On the right hand side is a flap concealing a USB port and CI slot.

On the rear panel is a decent array of sockets but the first thing to note is that there’s only one HDMI output, not two as found on Panasonic’s DMP-BDT310. So if you want HD audio to go with those 3D pictures you’ll need an AV receiver with HDMI v1.4 inputs – you can’t pipe the signals to a TV and receiver independently, and there’s no multichannel analogue workaround. Not a deal breaker perhaps, but it might force you to finally upgrade that ageing amp. It’s joined by component, composite, stereo audio and optical digital audio outputs, as well as an Ethernet port and RF input/loopthrough.

Not only can the BD-D6900 play 3D Blu-ray discs, but it can also convert 2D discs to 3D, a feature only previously available on Samsung’s 3D TVs. It can also be applied to Freeview pictures, which is no match for Sky 3D but might just bridge the gap until real 3D channels come to Freeview. You won’t find any of the 3D picture adjustments found on the Panasonic DMP-BDT110 though. 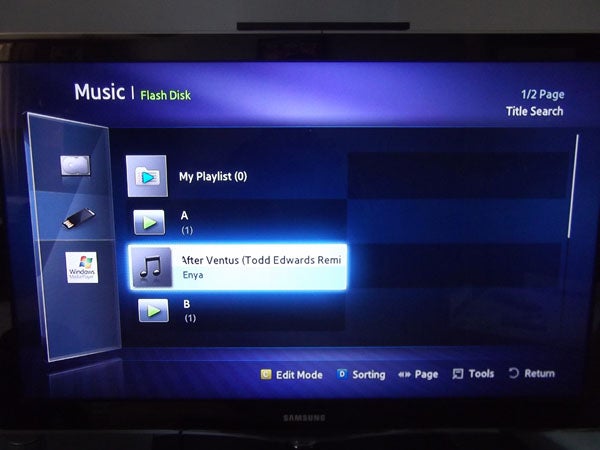 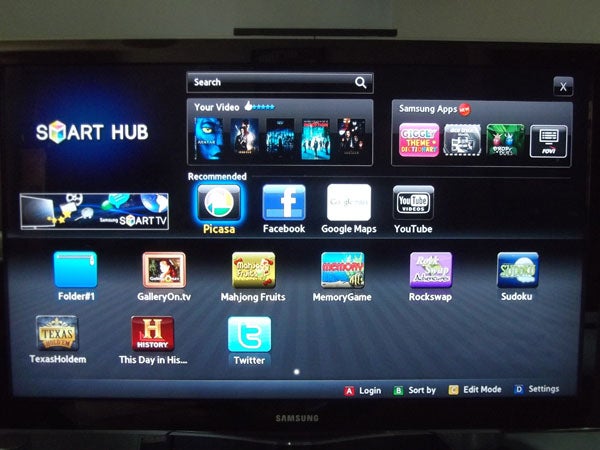 Smart Hub, meanwhile, is the superb replacement for Samsung’s Internet@TV system, boasting a much simpler and more intuitive interface plus a bunch of new features that make it easier to organise and access your content. 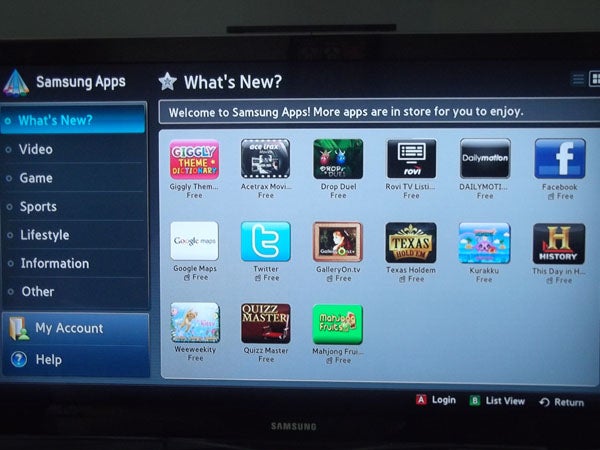 The line-up of ‘apps’ includes BBC iPlayer, Facebook, YouTube, LoveFilm and Picasa, with loads of other great-looking games and puzzles that should keep all members of the family entertained. The icons for these apps are arranged in a grid – a nod to the iPhone or Android – and you can group them into folders, remove ones you never use and add new ones from the store. If a couple more catch-up TV services are introduced to Smart Hub, it will become even more formidable. 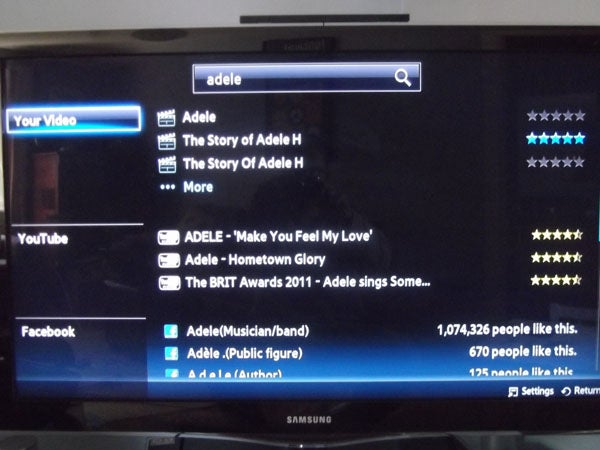 New for 2011 is Search All, which scours Facebook, YouTube and connected PCs for stuff that matches what you enter. It finds loads of relevant results in a flash, making it a very effective new feature. It’s joined by Your Video, which recommends movies and TV shows available in LoveFilm and other VOD providers based on your viewing history and ratings, as well as providing shed-loads of trivia and photos relating to each movie. 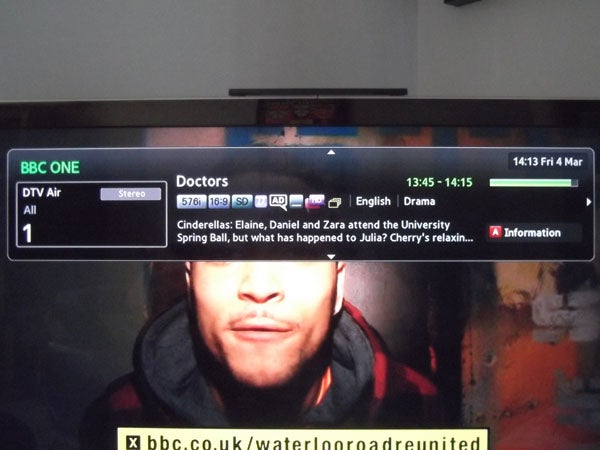 On the Freeview side, the DVB-T2 provides access free-to-air hi-def channels, with an eight-day EPG and an onscreen info banner that lets you browse the schedules. With an HDD connected, you unlock features like series link and Timeshift (play/rewind live TV).

As we discovered with the BD-D8500, Samsung has gone back to the drawing board and came up with a flashy new user interface. The main menu retains a colourful, cartoony vibe, with each function being represented by an animated icon and a short list of options floating above it. It can be a little hesitant to move from one to the other, but we can’t fault it on logic or intuitiveness. 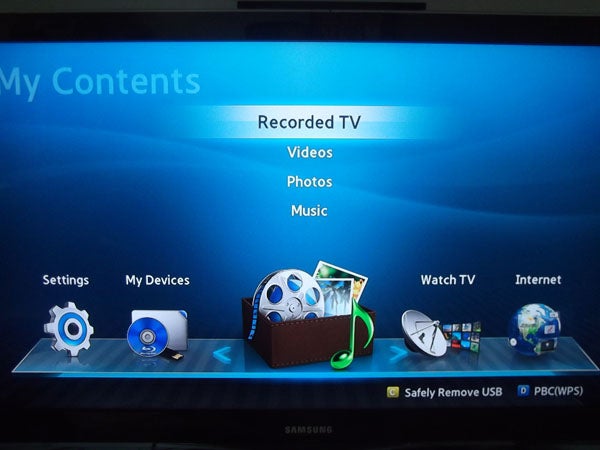 In fact, all of the menus have been designed with the same level of flair and user-friendliness. The Settings menu uses large text and a straightforward list structure, while judicious use of graphics for trickier procedures like network setup could be a real godsend for beginners. 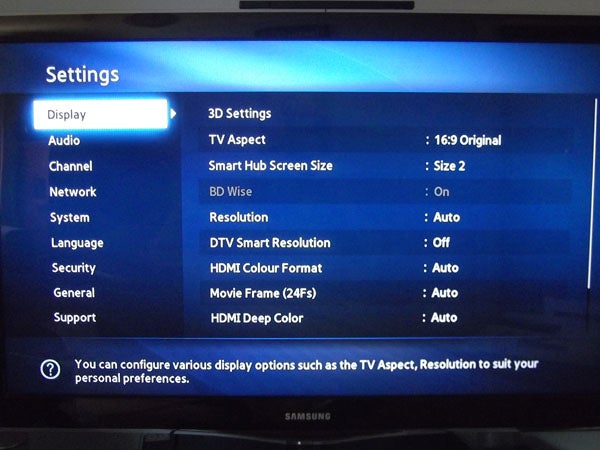 The network functions are easy to navigate, particularly Smart Hub. Each area – the home page, Your Video, Search All, the App Store – is laid out clearly using eye-catching graphics. The only awkwardness arises when entering user names and passwords into the many dialogue boxes using the remote, which is a little time consuming, but thankfully it remembers what you’ve entered for future use. 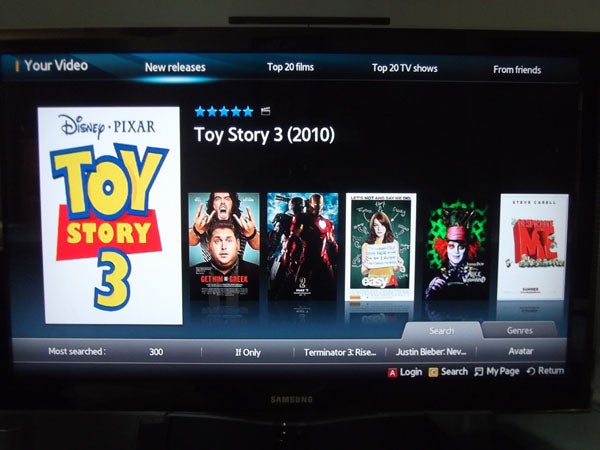 We encountered few stumbling blocks when using Freeview, apart from the obvious limitations that arise from the inclusion of a single tuner – with a USB HDD connected, you can only record and watch one channel at a time. Recordings are stored in an attractive library screen, which is easy to access from the main menu and uses thumbnails for each title. Navigation is more muddled than we hoped, using superfluous editing submenus, but on the whole it’s pretty straightforward. 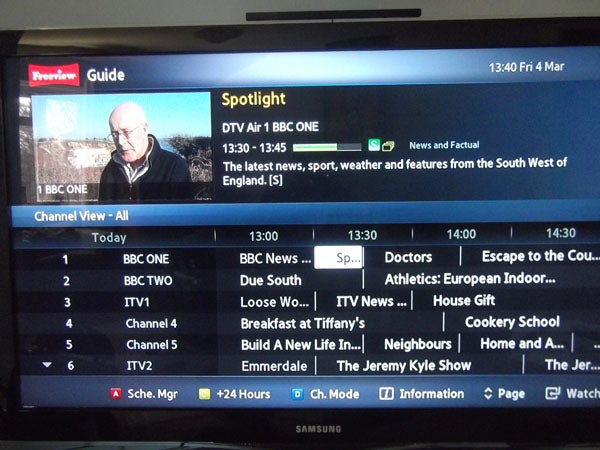 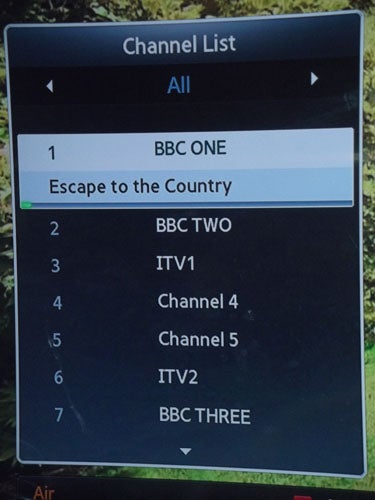 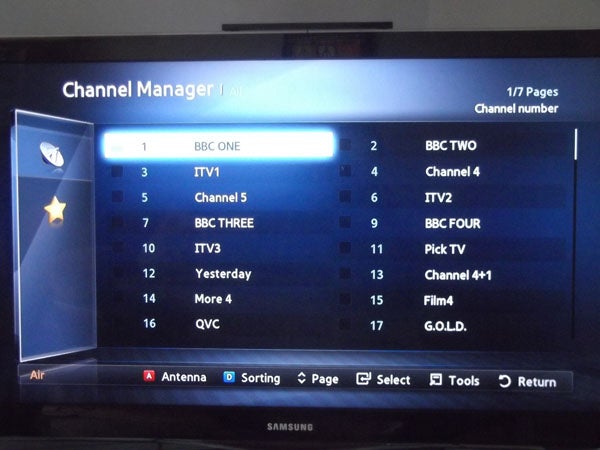 The Freeview EPG packs everything into a single screen (live TV, six-programme grid, synopsis) without feeling particularly cluttered and we like the onscreen info banner that offers a comprehensive array of details about what you’re watching. It also allows you to scroll through forthcoming programmes on any channel, rather than limiting you to now and next info. Channel changing is fairly quick and the lightning fast digital text makes our Sky box seem slower than Ceefax. 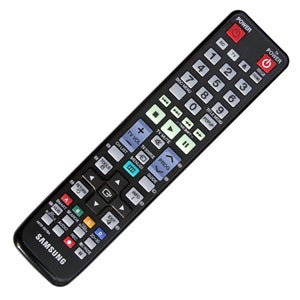 The remote is user-friendly to the point of being patronising. The chunky, colour-coded buttons are laid out and labelled in a way that only an idiot would fail to grasp, while key functions like Smart Hub are granted their own buttons.

The BD-D6900 takes a fairly standard 40 seconds to load ”Terminator Salvation” but our other test discs such as ”Inception” and ”Avatar” took around 10 seconds less.


We really can’t fault the Samsung’s 3D picture quality. We tried ”Avatar” on a Panasonic 3D plasma and the images are gobsmacking – the various Pandoran landscapes are conveyed with a dramatic sense of depth and distance that makes you want to plunge into the picture, while the vibrant colours and pin-sharp detail shines through the inevitable gloom of the glasses. Much of the credit for this goes to the TV of course, but the BD-D6900 certainly holds up its end of the bargain with no visible glitches or artefacts.


Drop the third dimension and the prognosis is equally positive. With ”Inception” the image looks forensically sharp, conveying the textures of skin, clothing and buildings with pleasing stability and focus, while the natural colour palette lends believability to the image. The scene featuring exploding Parisian shop-fronts really dazzles, thanks to the gorgeous detail, radiant colour and the way the player smoothly tracks the flying shards of debris.

Sadly the 2D-to-3D conversion mode falls a little flat with ”Inception”, particularly if you watch it straight after a real 3D disc like ”Avatar”. You can certainly see the deck trying to separate out the different layers and bring an added sense of immersion, but it’s not deep enough to convince and the image seems slightly noisy. Try it with a movie originally shot in 3D however, and the effect is much more impressive, making the 2D ”Avatar” disc look almost as good the 3D version.


Next we tuned into Freeview and marvelled at the crispness and vibrancy of hi-def channels. Studio-shot material like ”The Graham Norton Show” and ”Mrs Brown’s Boys” look particularly lucid, although the vast array of HD drama and sports is beautifully presented too. Standard definition pictures are perhaps a little noisier than we expected, but it’s not bad enough to ruin your viewing pleasure.


So is the BD-D6900 worth well over £200 of your hard-earned cash? From a Blu-ray perspective, definitely. The astonishing feature list, which includes all the latest features such as 3D playback, internet content, DLNA networking and extensive multimedia support, is second to none, plus its 3D/2D picture performance is superb.


What’s more, the new onscreen design makes it incredibly easy to use, give or take a couple of sluggish menus, and Blu-ray decks don’t come much sexier than this, thanks to the silver finish, super-slim dimensions and touch-sensitive controls.


It’s only the Freeview functionality that might make you think twice. With a single Freeview tuner and recording available only when you plug in an external HDD, it’s no match for a proper PVR – if it’s recording flexibility you’re after, try the BD-D8500 or buy a separate Blu-ray deck and twin-tuner PVR. But for casual Freeview watching, the BD-D6900 does a terrific job, boasting an excellent EPG and impressive hi-def picture quality.