The Samsung 970 Evo is the more intriguing SSD of the firm’s two latest releases. While the flagship 970 Pro tends to grab the headlines, Samsung’s Evo drives are the more affordable products, and the models that most folk tend to buy.

However, the market is packed with fast SSDs now, and they’re cheaper than ever. So does the 970 Evo still warrant a place in your PC?

The 970 Evo is the more mainstream SSD from Samsung’s two recent launches, so it’s manufactured in a larger range of capacities. 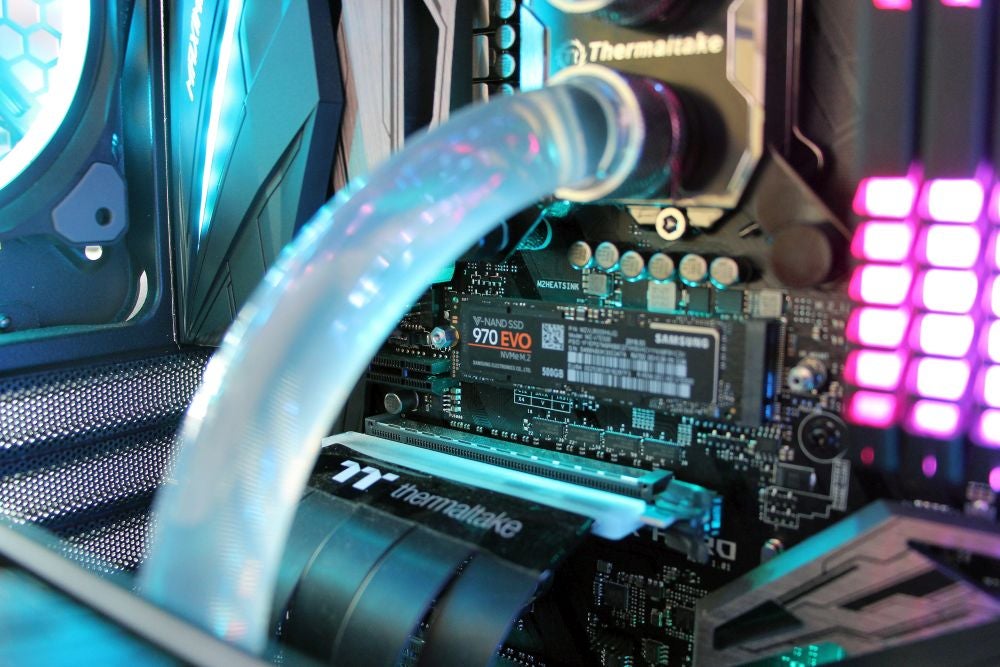 These prices remain high in the wider market, but they do compare well to the two 970 Pro drives available. The 512GB model of Samsung’s flagship costs £219, while the 1TB model is £399.

The 970 Evo is a more affordable option, then, which means you get a modified specification when compared to the flagship 970 Pro.

The biggest change from the 970 Pro is in the memory chips themselves. The pricier drive relied on 2-bit MLC memory, which is faster, but more expensive and less efficient in terms of how many transistors it can include. The 970 Evo uses 3-bit TLC memory, which crams more transistors into each chip to bring the cost down – but at the expense of a little speed.

Don’t be fooled by Samsung’s claims that the 970 Evo actually uses 3-bit MLC – that isn’t really a thing that exists, and it’s just an attempt by the Korean firm to rebrand TLC memory as MLC, which tends to have a better reputation for speed. 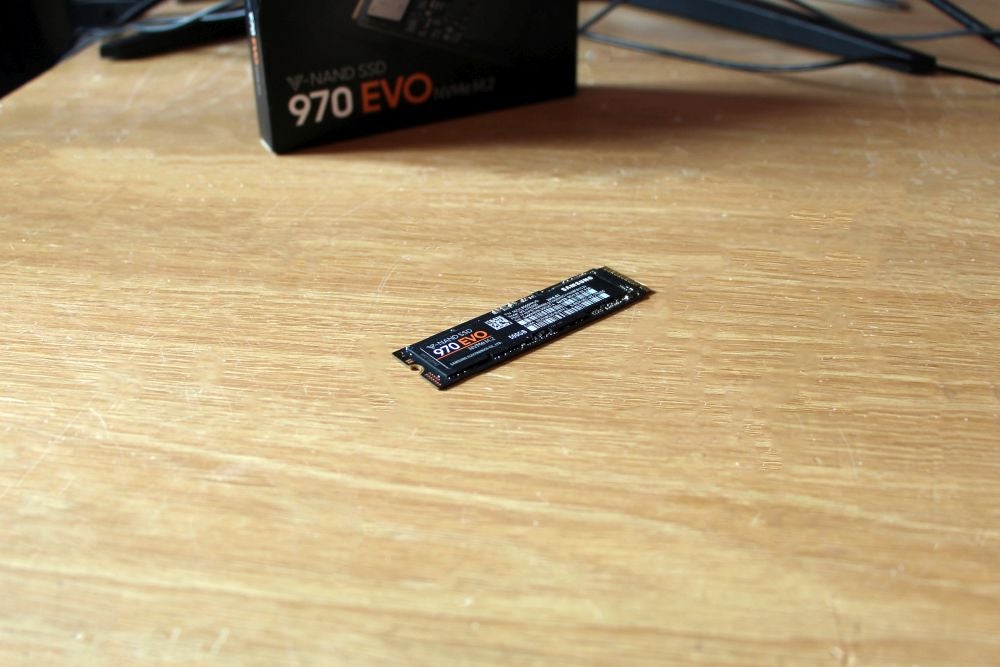 The 970 Evo uses the new Phoenix controller. That chip was introduced in the Pro version of the drive, and it’s a smart bit of silicon. It has five cores, with one dedicated to communicating with its host system, and its reduced clock-speeds mean that temperatures are lowered. The controller is also topped with a small nickel plate to improve thermal performance.

They’re all excellent figures that won’t prove troublesome in any gaming or consumer PC, but the 970 Pro does offer better endurance. In fact, its ratings double on the 512GB and 1TB models when compared to their 970 Evo equivalents.

In other, peripheral areas the 970 Evo remains unchanged. It still has the excellent five-year warranty, and the drive looks exactly the same, with the familiar 2280 form factor and the layer of cooling copper beneath Samsung’s branding sticker. 256-bit AES encryption with Microsoft eDrive and TCG Opal 2.0 remains, and the Magician app is still present for drive management.

The switch to 3-bit TLC memory rather than 2-bit MLC memory does mean that the 970 Evo can’t quite match the 970 Pro for speed, but the gap between the two drives is often negligible.

In CrystalDiskMark, for instance, the 970 Evo’s sequential read speed of 3568MB/sec is actually 1MB quicker than the 970 Pro. Impressively, it’s also faster than last year’s 960 Evo and 960 Pro drives, albeit by small margins. 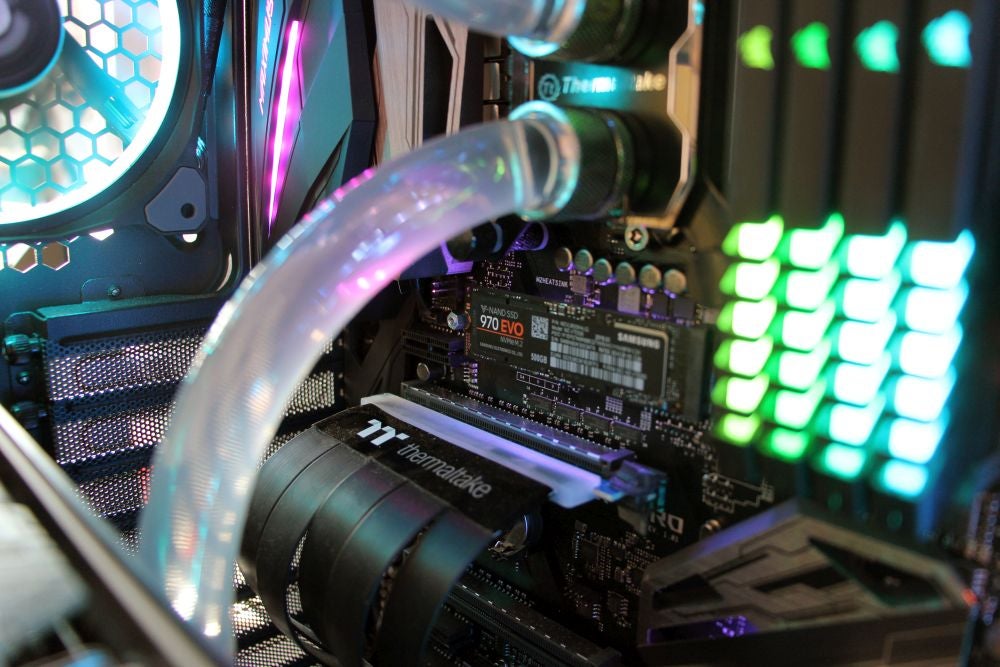 The 970 Evo’s read speeds only fell behind the more expensive drive when handling the smallest files. At this level the Evo hit a decent pace of 49MB/sec, but the Pro managed 60MB/sec.

In CrystalDiskMark, the 970 Evo scored a write pace of 2495MB/sec. That, again, is better than the 970 Pro – the flagship drive topped out at 2336MB/sec. Those results are all faster than last year’s drive. The 960 Evo could only manage a write speed of 1617MB/sec. 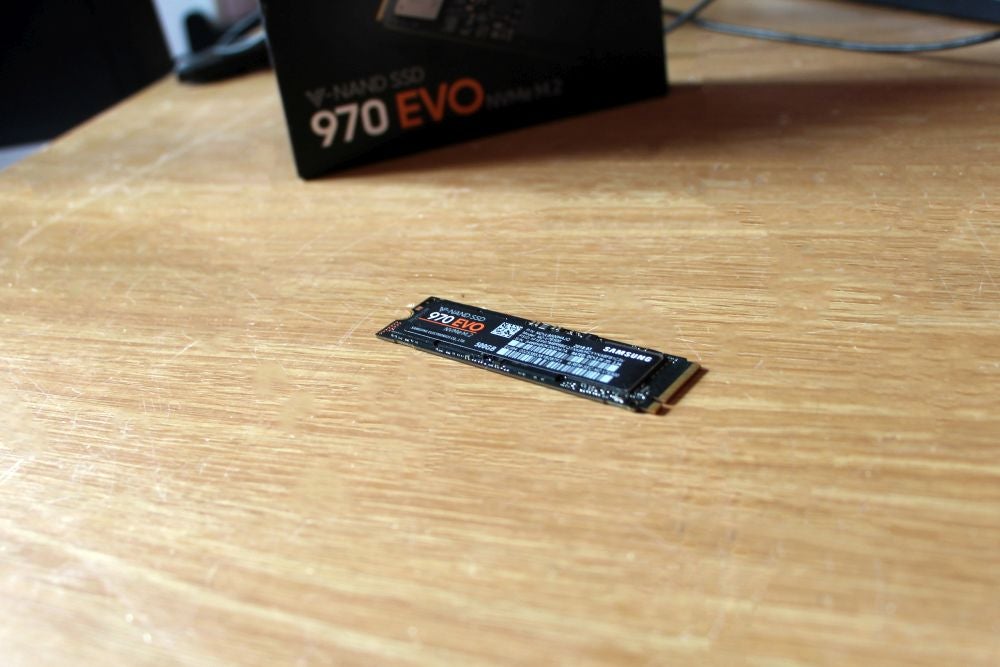 The 970 Evo’s pattern of great speed but lesser pace when reading and writing the smallest files was repeated in the Atto benchmark.

The Samsung 970 Evo may not be the flagship drive, but there’s arguably more to like about this drive than the range-topping 970 Pro.

For starters, the speeds are excellent. The 970 Evo outpaces the 970 Pro in a couple of tests, and it’s never far behind in the rest of the benchmarks. Compared amongst the rest of the market, the 970 Evo remains faster than almost anything else.

In those tests where the 970 Evo falls behind, it’s never by a significant margin – and you’ll never notice the speed difference inside the average PC. And, while the 970 Evo does have lesser endurance ratings than the 970 Pro, only the meatiest workstation systems will push those figures to the limit. For the vast majority of us, the 970 Evo has ample longevity.

The 970 Evo is cheaper than the 970 Pro, while offering similar speeds and a great specification. The 970 Pro may remain the ultimate SSD, but the 970 Evo is a more balanced drive that most people would be better off buying.

The 970 Evo may not have the endurance ratings of the 970 Pro, but the majority are unlikely to notice. With excellent speeds and a keen price, the 970 Evo is the best mainstream SSD on the market.