Aside from its upcoming OLED screen, the Samsung 55in OLED, the new ES8000 series on show at CES represents Samsung’s latest flagship TV series. So we were keen to spend some time with the new screens – especially the 75in version! – at the show to get a handle on what sort of innovations Samsung might introduce to its UK range come February/March.

Samsung has been particularly strong at instigating new TV design trends, so it’s no surprise to find the ES8000 models looking extremely attractive. Their bezels – even the one around the 75in screen – are still slim, and the shift this year to a narrow (around 1cm) black crystal finish with a metallic silver out trim is very easy on the eye. That said, the new ES8000 didn’t stand out from the crowd as much as previous Samsung designs. Maybe now that bezels and rears have got pretty much as slim as possible, truly ‘revolutionary’ designs are harder to achieve. 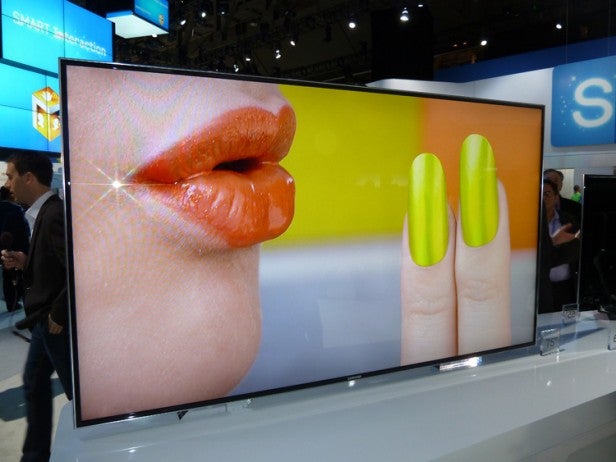 When it comes to picture quality the 75ES8000 also seemed less of a leap than we might have hoped for. It’s entirely possible/probable that Samsung has fine-tuned many aspects of its picture quality. But aside from running a few fairly generic demos of motion resolution and sharpness, no particular picture advances were being talked about openly on the stand.

Looking at the picture, while it certainly seemed great with the high brightness, colour-rich material on show, we wouldn’t say it looked like much of a leap ahead from last year’s 8000 series. Though this impression probably wasn’t helped by the fact that the ES8000 models were being shown in close proximity to Samsung’s superb-looking OLED TVs.

The one thing that might hint at subtle refinements we’ll hopefully notice more in the more controlled, domesticated environment of our test room is the fact that we were ‘first looking’ a 75in screen, where any weaknesses in the picture quality would be painfully obvious. And really we didn’t see any major weaknesses.

Samsung showed precious little dark content on the 75ES8000, but the few shots we did see suggested that maybe Samsung has got to grips with its previous backlight consistency problems, even on this vast, edge-lit 75in model. Though really, trying to spot backlight inconsistencies on a brightly lit show floor is a mug’s game.

Interestingly, Samsung didn’t have a single ES8000 screen showing 3D. Indeed, there was practically no mention of 3D anywhere on Samsung’s stand. So sadly we couldn’t see how Samsung’s 3D performance might be improving for 2012. 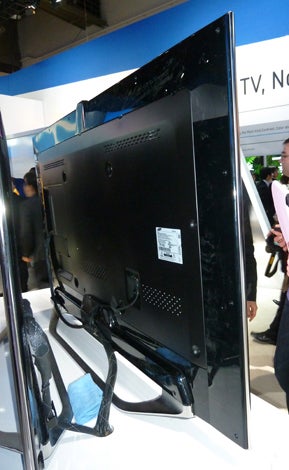 What we certainly DID play with extensively, though, is Samsung’s latest Smart TV functionality. This includes some interesting new features, such as a Family Network that lets you set up a deliberately small, private online network with other Samsung-owning family members, for the sharing of photos, memos and videos.

The redesigned Smart Hub menu, meanwhile, now provides ‘genre’ app/content aggregation around such themes as ‘kids’ and ‘fitness’. It also looks great, with higher resolution graphics than you got with last year’s ground-breaking system.

The most intriguing thing about the 75ES8000’s latest Smart TV engine, though, is its ‘remote free’ control options. First up is voice control, which lets you control basic functions of the TV by issuing such verbal commands as ‘Hi TV’, ‘channel up’, ‘smart hub’ and ‘volume up’. The range of understood commands will supposedly grow considerably ahead of the TV’s launch, and you can even say an exact channel number and have the TV change to the right channel automatically.

A demo, though, did nothing to shake our long-held belief that these sort of voice control systems are mere gimmicks. The TV frequently refused to respond to the demonstration person’s commands, and the simple act of barking instructions to a TV just feels wrong.

Next up is face recognition. Built-in cameras on some of its new high-end TV models enable the TV to tell ‘at a glance’ who’s using it. It remains to be seen if the cameras are good enough to accurately detect faces in a normal home lighting environment, though.

Last up is the Smart Hub’s new Motion Control system. This lets you, Kinect-style, use your hands to control a cursor on the screen. And miserable old curmudgeons that we are, we were again highly underwhelmed by the idea of waving our hands about to control our TV. 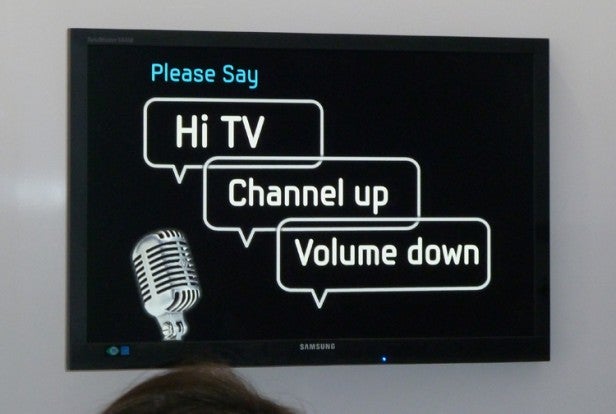 The only bit of the motion control demo that didn’t make us cringe was the bit where your hand becomes effectively a mouse, for moving a cursor freely around web pages. This is certainly preferable to faffing about with normal remote cursor buttons – though we’d still prefer to just have either a touch-pad or touch screen remote.

One last intriguing feature of the 75ES8000 is the fact that it’s upgradable. Apparently owners will be able to get ‘upgrade kits’ in the future that could add new features and even, potentially, upgrade the processors from the standard dual-core ones into quad-core affairs!

So there, in a nutshell, is what we could figure out about the 75ES8000. To sum it all up, it appeared a mighty fine and lovably huge TV that we’re very much looking forward to testing. But it wasn’t the absolute stand out show-stealer that its Samsung predecessors have often been.