Anyone who’s braved the madness of the halls of the CES in Las Vegas in its opening days will agree that if the chance to get some time with high profile products outside of the main show floor comes up, you jump at it. So when we received an exclusive opportunity to get some hands on time with some of Samsung’s new TVs in the Bellagio Hotel’s Hyde room – complete with a backdrop of the Bellagio fountains – we jumped at it.

Among the sets on show were three highlights: Samsung’s 105-inch, 21:9-ratio, curved UHD TV (which may not actually get released), an 85-inch ‘bendable’ LCD TV which allowed you to flatten or curve the TV at will (which remarkably might get released), and 78-inch, 65-inch and 55-inch sizes of the U9000 curved UHD range that Samsung sees as the focal point of its new TV range. 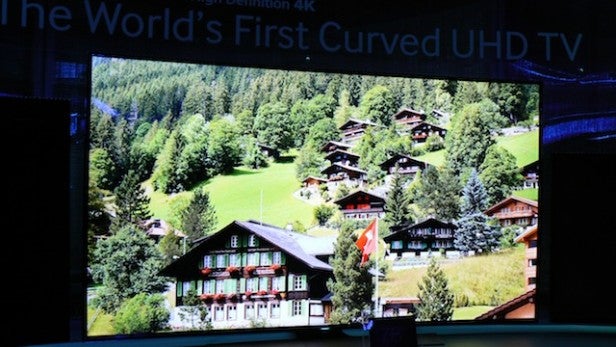 Homing in on these U9000 models, the first thing that struck us as we studied the three screen sizes on show was the controversial curve of its design, and how the effectiveness of the curve increased as you stepped up the picture sizes. At 55 inches it seemed to add problems without giving much benefit, but at 65 inches and especially 78 inches the curve did actually make some images appear more immersive thanks to a greater sense of depth. The extra screen size also increased the sweet spot from which you and others can experience curved TV’s subtle picture benefits, while the curvature also increased the angle you could watch from without images losing colour resolution and contrast.

It was interesting to note with the 65-inch and 78-inch sets, too, that you could watch from a wider viewing angle without the picture’s geometry starting to look off than was the case with the 55-inch U9000.

Samsung has developed a new depth-enhancement image processing component for the U9000 models that adjusts images – especially where contrast is concerned, it seemed to us – so that they work more effectively in a curved screen environment, creating an extra sense of scale.

Not surprisingly Samsung didn’t demonstrate anything other than native 4K running on the out-front model of the 65U9000 we spent the majority of our hands-on time with. But there was a demo of the upscaling running on a second TV in a separate, smaller demonstration area, and from what we saw there we’d say that Samsung’s upscaling if anything looks even more effective now than it was on 2013’s F9000 UHD models – which is saying something. 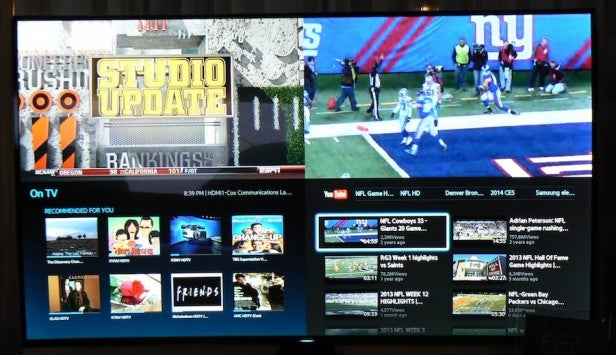 Also not allowed to draw attention from the 65U9000’s 4K images in the main exhibit area were Samsung’s latest Smart TV features. But again we got to have a little play with these in the back room demo area, and found ourselves extremely impressed first by Samsung’s new Smart remote control – which incorporates a point and click interface and a nifty thumb-sized swipe pad – and then by the fact that the quad-core processing engines in Samsung’s latest TVs let you run up to four apps onscreen simultaneously.

To be honest we’re not sure our humble brains could often cope with such an overload of information at once, but then again it could be something that becomes second nature once we’ve lived with it a while.

Heading back to spend a good amount of time (by CES standards) just watching the 65U9000 show its predictable native UHD demo reel of lovely vistas and night-time cityscapes, our impressions of Samsung’s second-generation UHD picture quality were that it was very strong indeed.

Especially noticeable was a clear advance in colour handling over 2013’s UHD models, as the 65U9000 produced a wider and more subtly rendered palette that’s a much better partner for the screen’s UHD resolution, ensuring that none of a 4K image’s resolution is lost through inadequate colour resolution.

Contrast looks excellent too, with rich, deep blacks sitting right alongside bold peak whites and dynamic colours – a truly impressive feat considering the TV is not only using an edge LED lighting system to illuminate a large 65-inch screen but also having to make the light somehow follow round the screen’s curve!

Inevitably, though, the ultimate star of the 65U9000’s picture show is its resolution. The sense of detail and pixel depth on show is explosive, especially as the extreme clarity remains mostly intact when the screen is having to handle a lot of motion. 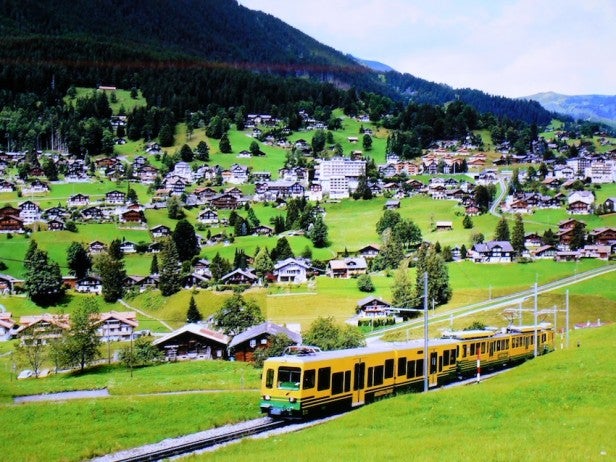 There was just a trace of motion shimmer, presumably caused by the set’s judder-reduction processing. But our suspicion is that you’ll be able to get rid of this via the set’s motion processing options.

We also spotted a touch of backlight clouding during very dark sequences. But the 65U9000’s panel was doubtless being driven far more aggressively, to combat the Hyde Club’s lights, than it would be in a normal living room, so given that the backlight clouding was subtle we’d again suspect that it could probably be managed by some easy adjustments of the backlight and brightness settings.

While Samsung is adamant that consumer research shows the public is ready to embrace the curve, it’s still the one aspect of the 65U9000 that remains the biggest unknown. Samsung will also be launching a series of new flat UHD TVs, so we guess we’ll be able to get a more accurate idea of the consumer’s thirst for curves once the sales figures are in next Christmas.

With Samsung hinting at some surprisingly aggressive pricing on its new curved UHD sets, though, we’ve seen enough of the 65U9000 already to feel confident that it’s going to be another extremely impressive 4K telly that will do no harm whatsoever to the healthy 4K market share Samsung has already racked up.

Next, read What is 4K TV and Ultra HD? 10 reasons why you should care