It would, of course, never do for one of the big two Korean AV brands to be outdone by the other. So it was that despite LG claiming proudly to have the ‘world’s biggest OLED TV’ on its CES stand in the shape of the EM6902, Samsung actually matched its arch-rival inch for inch with its own 55in OLED TV. And as with the LG model, Samsung’s effort is also due to be launched before the end of 2012.

However, for once it felt as if Samsung was slightly playing catch up with its Korean rival. For Samsung’s model just didn’t feel quite as ‘finished’ as LG’s. 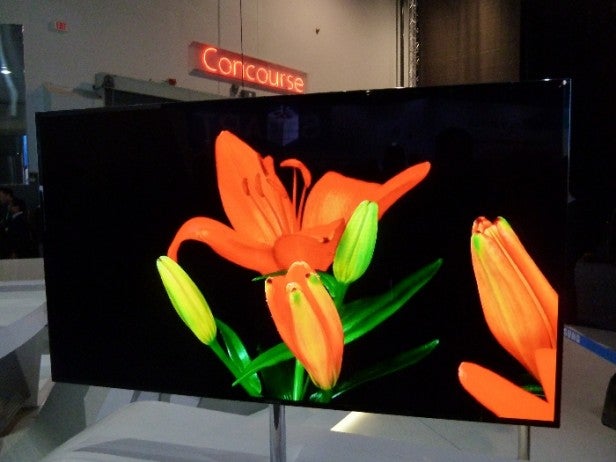 For a start, although it’s a hugely attractive piece of AV gear with its prodigiously slender frame and glinting metallic rear, it’s not quite as breathtaking aesthetically as LG’s OLED star. For while its bezel is less than 1cm across, it’s fatter than LG’s. And its depth is roughly twice that of its rival’s model, feeling more ‘mobile phone’ thick than ‘credit card’ thick.

Then there’s the demo material Samsung was running. This largely consisted of extremely stylized, mostly static images containing forced combinations of extreme blackness and bright, colour-rich content such as flowers and lights.

This content undoubtedly served its purpose of getting us salivating about the screen’s extraordinary black level response and superb colour reproduction, which in both cases went far beyond anything possible from any previous type of LED or LCD TV. Indeed, Samsung’s OLED model seemed right up there with LG’s OLED screen in these two key picture areas, producing a picture of near-miraculous dynamism and punch. However, the lack of any ‘natural’ video footage did raise questions as to whether Samsung wasn’t quite confident yet about the performance of its new OLED beast to show it running more difficult subject matter. 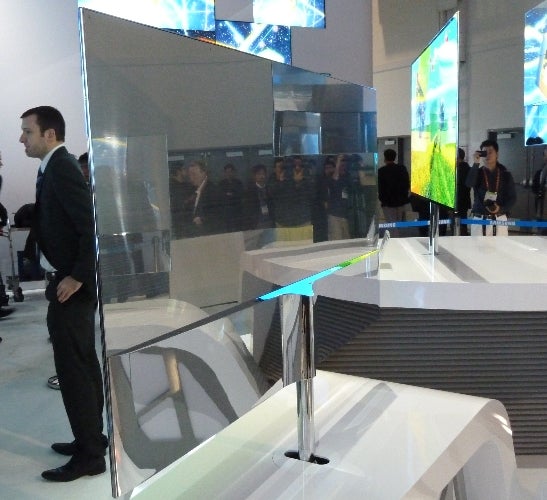 If this is the case, then it was a doubly unfortunate mistake since a couple of the OLED 55in panels on Samsung’s stand showed gentle but noticeable signs of image retention, where you could see faint ‘ghosts’ of some of the brightest static picture elements getting left behind on the screen after they should have moved on.

Yet another problem was that the glossy sheet of glass across the front of Samsung’s OLED panel seemed rather reflective of ambient light – though of course, the amount of light on a show floor is way higher than anything you’d expect to see in a normal living room.

However, even the limited source material available to us did allow us to further appreciate how wide the screen’s viewing angle was by flat TV standards, and how much subtlety the screen was capable of portraying in terms of colour range and greyscale information. Motion seemed superbly clean and crisp too – as much as we could tell from the limited motion of the content being shown. 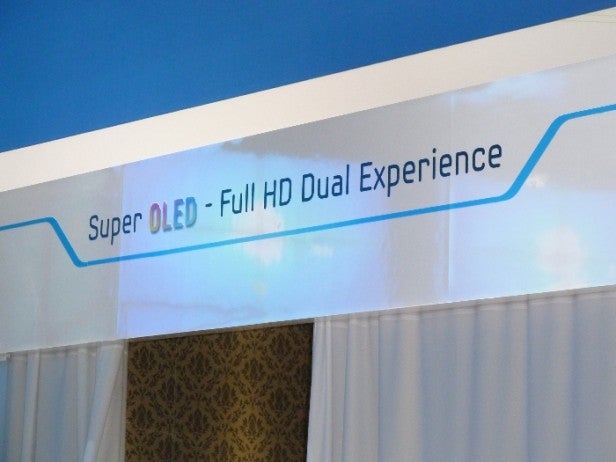 After queuing for 40 minutes to enter a special ‘booth’, we also managed to explore an interesting side feature of Samsung’s 55in OLED: its ‘Full HD Dual Experience’ system. This allows two different people to watch two full-screen, full HD video streams simultaneously by dividing them across the two ‘parts’ of a 3D video stream and putting a switch on its 3D glasses that lets you just watch one of the streams at a time. We were very impressed by how little the two images ‘bled through’ onto each other when using this mode, and there was no doubt that the full-screen image each person was seeing was full HD.

Samsung has even built speakers into its 3D glasses, so that each viewer can hear just the audio from their own video stream. 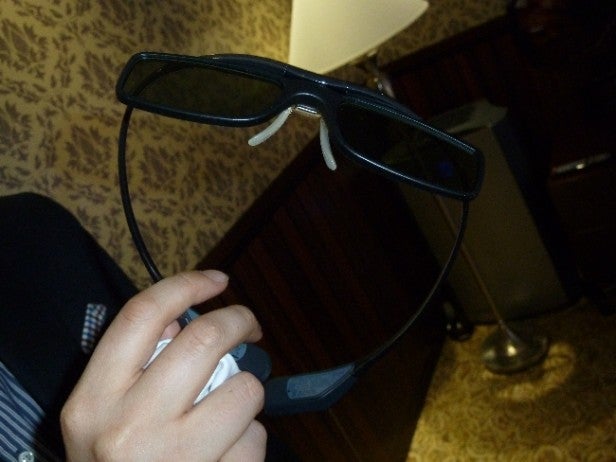 We also had a good ‘hands on’ with the new Smart TV interface Samsung is introducing to some of its 2012 TVs, but we’ll save our thoughts on that for our upcoming look at the new 75in model from Samsung’s 8000 edge-LED series.

Overall, while Samsung’s OLED 55in TV lacks some of the design outrageousness of LG’s rival model and also feels a bit further away from being a truly finished product, it still did enough during our time with it to have us drooling for the day when it hits our test rooms.

The Samsung 55in OLED TV is scheduled to launch in the last quarter of 2012 for an as yet undisclosed price (though we received a hint that it would be in the same ball park as Samsung’s C9000 series, the 55in version of which cost between £7000 and £8000 when it first came out).