Everyone here at the TrustedReviews office has a bit of a penchant for ultra mobile laptops. The regular travelling and 24/7 nature of our work means we’re constantly working on the move and we require long lasting low weight laptops to facilitate this. Take Computex, for instance, a 12 hour flight to Hong Kong, another quick hop to Taipei and then four days of walking from booth to endless booth, only to be followed by a another 20 hours of travelling back to Blighty. In between all this moving about you then actually have to find some time to sit down and write about it all. Without a laptop that can keep going for most of the day, this can be next to impossible.


This is why, for a long time, Solid State Drives (SSDs) have been high on our list of anticipated products. Not only do they have ultra fast access times, they also weigh less and use less power than a normal Hard Disk Drive (HDD), meaning your laptop lasts that bit longer. 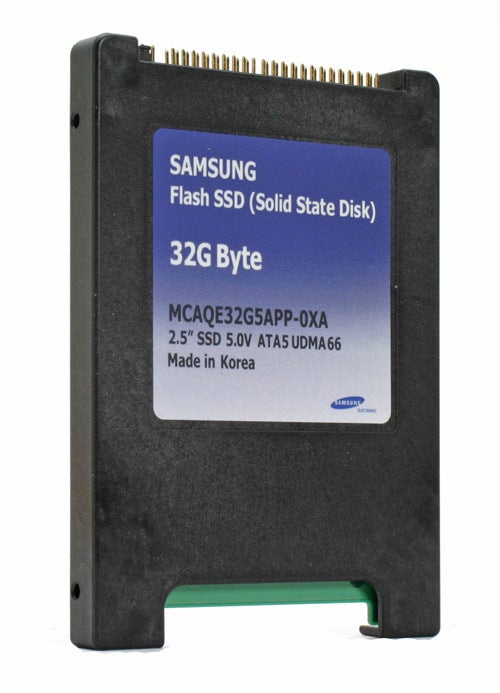 So it was with great excitement that we received our first SSD to review, the snappily titled MCAQE32G5APP-0XA from Samsung. This 2.5in ‘laptop’ SSD weighs only 51g and has as a capacity of 32GB. This may not seem like much but, as I’ve pointed out before, this is more than enough for an operating system, office productivity suite, email program, image editing program, plenty of documents, and there should even be enough left over for a decent music collection and the odd episode of your favourite TV show. What’s more, because SSDs don’t suffer performance degradation from data fragmentation (unlike HDDs), every single byte of space can be used without your system grinding to a halt. 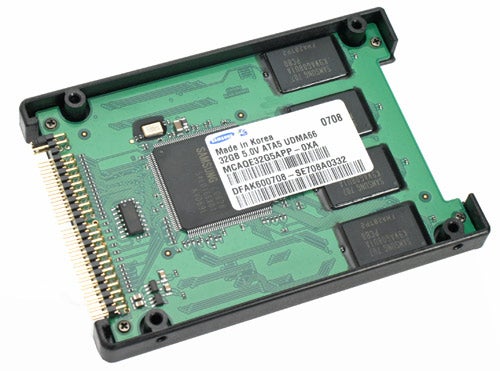 Just like a USB memory stick, SSDs use a type of memory chip that can continue to store data even when it has no power. Having no moving parts makes accessing information extremely quick – it just takes a few milliseconds to calculate the correct portion of memory to read/write. This is in contrast to normal HDDs that use magnetic particles on spinning disks (or platters) to store data. For them to access a piece of information the disc has to ‘spin-up’, the read/write head (the thing you hear making a clicking noise when your HDD is in use) has to be moved to the right track on the disk, and then the disk has to spin to the right point on that track. This adds a significant amount of delay to the process of reading and writing data, so much so that even the fastest consumer hard drives have access times 20 times slower than this Samsung SSD. Moreover, the energy used to spin the disks and move the read/write heads creates a fair amount of heat and also draws significantly more power than an SSD.

As well as these performance benefits, the lack of moving parts used in SSDs means they are extremely resilient. Operating temperatures start at -25 degrees Celsius and go all the way up to +85 degrees Celsius. HDDs, on the other hand, are limited to a range of +5 degrees Celsius to +60 degrees Celsius. Also, the MCAQE32G5APP-0XA can withstand impacts of a colossal 1000g as opposed to a hard drive that will fail with a knock of 70g while operating and 300g while turned off. All of which makes SSDs rather an attractive prospect. 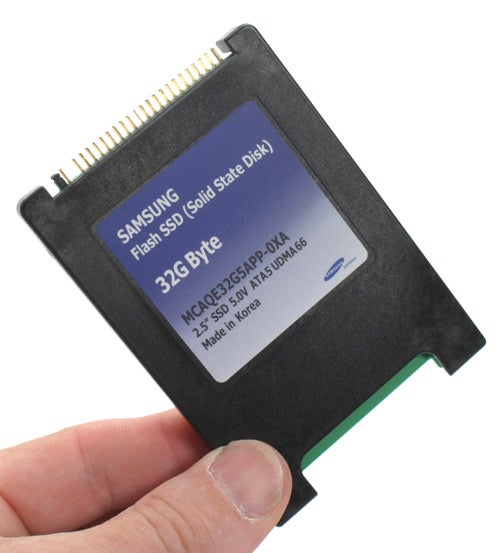 SSDs do have one Achilles heel, though, sustained read and writes speeds can’t yet compete with those of HDDs. So, if a hard disk has its data organised properly and doesn’t have to do a lot of seeking (moving the read write head back and forth), it will outperform an SSD.


Arranging a pair of these SSDs in a RAID-0 configuration would double the overall read/write speed, making them very competitive with even the fastest of HDDs. However, because the MCAQE32G5APP-0XA uses an EIDE connection, a dedicated IDE RAID card would need to be purchased to enable this – and obviously you can’t do this in laptop. If the connection were SATA, you would be able to use the SATA RAID controllers found on most modern motherboards.

Also, EIDE is an old connection so most new laptops don’t use it. This made testing rather difficult as we couldn’t use a current notebook to test performance and battery life. Therefore we used a desktop test bed to measure the drive’s performance. As we were using a full size test bed we thought it would be interesting to include performance figures for a full size desktop hard drive as well as a 2.5in HDD. The two drives I’ve chosen for comparison are the Hitachi Deskstar 7K1000 and the Samsung HM250JI. The Hitachi has incredibly fast sustained read speeds and equally impressive burst read speeds so it should really give the SSD a run for its money. The HM250JI is one of the largest 2.5in HDDs currently available and gives a good performance comparison for the SSD.

Initially we added each drive as an unformatted slave then ran HD Tach to gauge raw performance. Then we loaded Windows Vista onto each and tested boot up times. Finally, we copied a 1.05GB video file and a 178MB folder containing 671 files of various sizes to each drive then duplicated them. 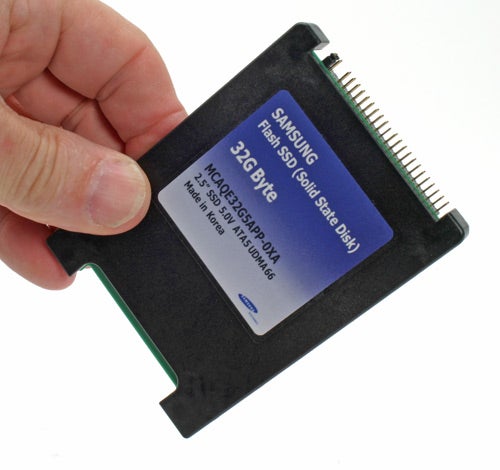 Using HD Tach, we can see all this theory represented in graph form. The SSD maintains a completely consistent but overall slower read speed than the desktop HDD, which unsurprisingly leads by a significant margin, the 2.5in HDD puts in a very poor show and only at its peak can it compete with the SSD. Looking at access times, the SSD really pulls ahead, as expected, and wipes the floor with both the HDDs.


Testing boot times the SSD comes out with a decent lead over the two HDDs however our file transfer tests had the SSD coming out last. This is fairly easily explained by the fact that booting a computer requires lots of very small files to be loaded – something fast access times are best for – whereas transferring large files is far more dependent on sustained read/write speeds. The only discrepancy is that the folder transfer was also slower on the SSD, which would suggest the image files and Word documents that make up the majority of the folders contents are large enough that the HDD superior sustained write speeds are enough to make it faster than the SSD. 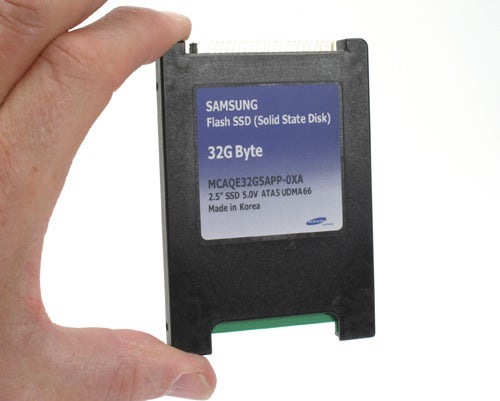 Using the SSD for everyday tasks, it definitely feels faster than any HDD I’ve used. Windows pop up instantly, flicking between programs is instantaneous, and ATI’s Catalyst Control Center loads almost instantly – it’s worth having an SSD for that alone!


So, connection limitations notwithstanding, everyone should go out and buy one of these, right? Well, no. At over £300 for 32GB, the cost per megabyte is nearly 40 times that of HDDs. So you’d have to seriously want that SSD goodness to justify the cost.


Being limited to EIDE, the Samsung MCAQE32G5APP-0XA is not going to be a viable upgrade for the vast majority of notebook owners. However, if you own an older machine, that does use this connection, then its super fast access times are going to give you a nice boost in performance. Also, if robustness is a concern then an SSD is the clear winner.


As for replacing a desktop hard drive, the MCAQE32G5APP-0XA is still not offering enough overall performance to be worth the money. Setting up a RAID-0 would give you truly great performance but as you would need to buy a dedicated RAID controller the cost is again massively prohibitive.


Overall, it’s best to wait until the SATA version of these drives arrives later in the year. 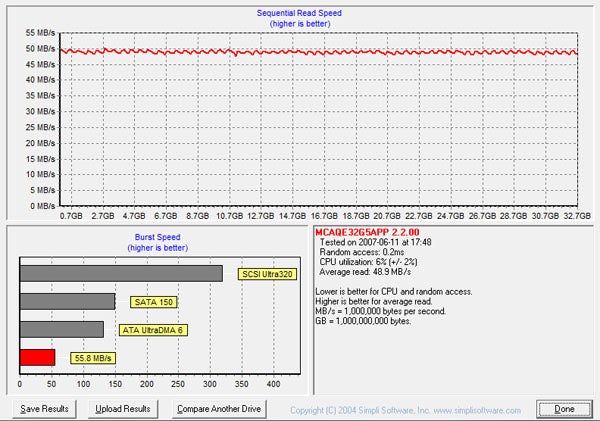 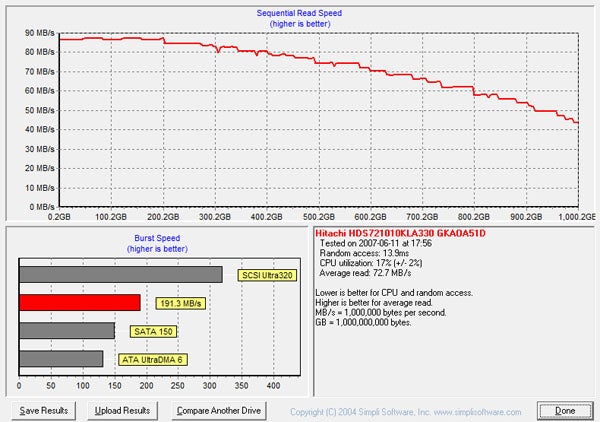 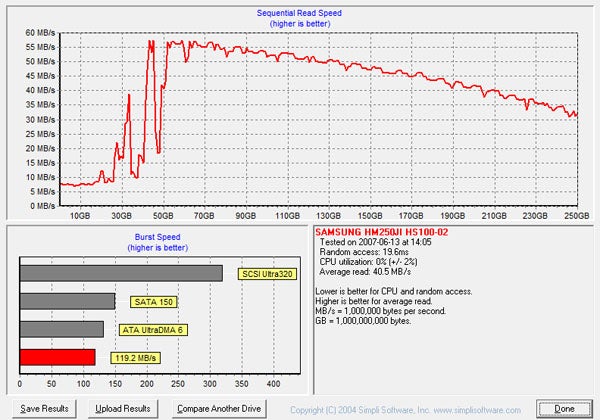