Samsung has learned some important lessons from the experiences consumers had with its 2013 Smart TVs. Particularly useful is the inclusion of a series of tutorial videos to help you get to grips with such features as voice and gesture control. Plus there’s an ‘e-manual’ that can be accessed via a dedicated button on the main remote and provides contextual advice – complete with diagrams – that help demystify the layout of some of the smart hub screens.

There’s still a bit more confusion than there should be, though, around establishing different Samsung user accounts and switching between users.

Thankfully, though, there’s this year much less confusion when it comes to using your smart device with the 2014 Samsung Smart TV system. For Samsung has thankfully now amalgamated all of its important second-device features – including second screen viewing, screen mirroring, content sharing and remote control functionality – into one app rather than forcing you to use multiple apps as was the case last year.

Unlike a typical TV review, there’s not much that needs to be said here; the bulk of this article understandably lies in the Features section. However, one thing we’ve certainly learned to put great store in where smart TV systems are concerned is speed. And here Samsung has done very well, with its Smart TV menus loading quickly and responding swiftly and accurately to our various forms of remote input.

We should stress, though, that we’ve only tested relatively high-end 2014-range Samsung TVs at the time of writing, so we haven’t been able to see how the latest Smart TV system holds up on cheaper models with less powerful processing engines. If we come across significant slow downs with cheaper models, we’ll update this section of this review. 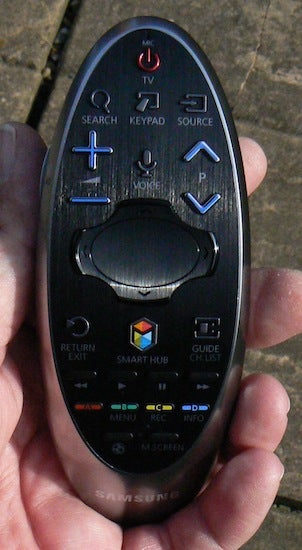 Turning to the two new control innovations Samsung has introduced this year – a new smart remote and finger gesture control – both deliver definite improvements over their predecessors.

The most important upgrade to the remote control is the addition of ‘point and click’ functionality. We’ve been big fans of this form of control ever since LG introduced it on its ‘Magic Remotes’ a couple of years ago; it just feels so intuitive to point directly at the part of the screen containing an option you want to select. It even feels more intuitive than using a trackpad (though for good measure the new Samsung smart remote also carries one of those!).

This dislocation between the onscreen cursor and the direction you’re aiming the remote takes away much of the intuitiveness of the whole point and click approach.

The touchpad section of the Smart Remote has been reduced in size from previous generations. At first we had our doubts about this, but actually it ends up working quite nicely, as its size and level of sensitivity mean you can navigate web pages or the Smart menus just by sliding your thumb around.

The fact that you press the touchpad to activate the point and click functionality; use the touchpad with your thumb if you prefer the slide and click approach; or use normal up/down/left/right buttons positioned right at the edges of the touchpad means there’s an awful lot going on in a very small area of remote control real estate.

This can lead to confusing accidental ‘mixing and matching’ of the three control options, at least in your first few hours using the remote. But if you grit your teeth and push past the initial frustrations, the smart remote ultimately turns out to be a pretty effective, flexible and comfortable control option – notwithstanding the dislocated point and click cursor issue.

The Smart Remote also carries a mic to support Samsung’s voice control system. This remains too convoluted to use as a main menu interface, but it certainly can be effective for inputting text into search fields or fast-tracking access to a particular content source.

And so we get to finger gestures. Stop tittering at the back. 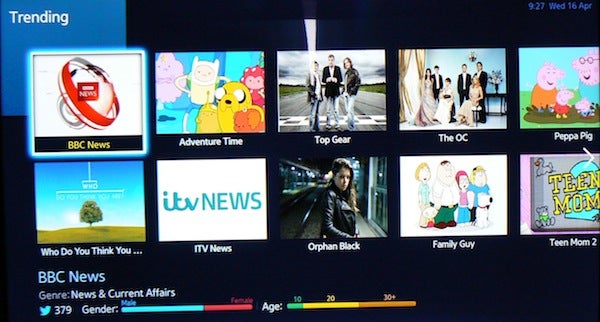 Samsung has tried for a couple of TV generations to get us controlling its TVs by waving our hands at them. But the system has been hamstrung by the fact that even on last year’s much-improved version trying to navigate web pages and smart screens with your hands is really tiring.

To tackle this Samsung’s latest cameras have been made sensitive enough to track the movement of just your fingers. And yes, this does make swiping and cursor moving much less tiring – as well as giving gesture control a more space age feel. You also feel less silly and self-conscious than you did when you had to wave your arms around!

However… even though it’s now much less tiring we still found ourselves hardly ever feeling inclined to use the system. Especially now the point and click remote option is available. Though we guess there’s no harm in having such a back up control option for those occasions where none of the remotes are falling easily to hand.