The Android platform allows you to throw your phone or table screen onto the TV in its entirety – Screen Mirroring, as it’s called. This can be quite fun if you’re wanting to, say, play a game like Dragonvale on a bigger screen. And the quality of the video reproduction from your phone on the TV screen is remarkably good.

The only pity is that the feature isn’t available through the Smart View app. Instead you have to enable Screen Mirroring on the TV, then enable S3 AllShare Cast on the Android phone.

You can also share all the multimedia stored on your Android or iOS device on your TV. However, as with the screen mirroring, the software for this is not built into the Smart View app, which is rather frustrating. Instead you need to use the AllShare Cast app on your Android phone, or with iOS the situation is even more of a pain, as you need to download the third party Zappo.tv app to enjoy the full version of Samsung Media TV – an app that costs £1.99. 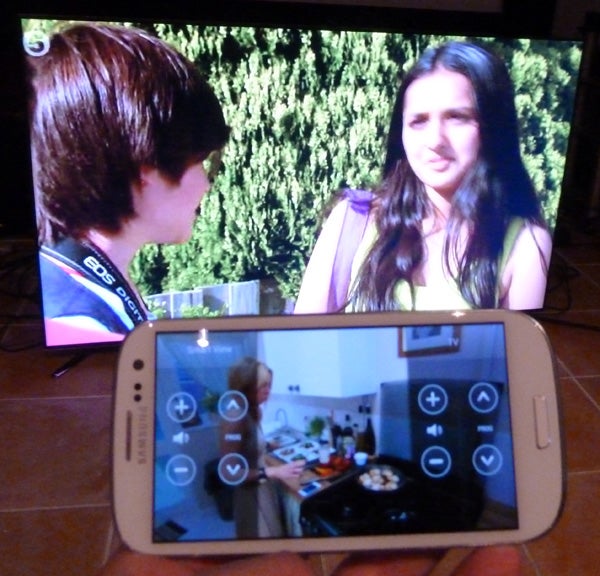 All this requirement for separate apps for separate second-screen functions is messy and complicated, and enough to seriously confuse many mainstream users we believe. And it’s made worse by the fact that so far as we can see, none of the information you need to find all the necessary apps and functionality is provided in any easy to find way. We only found everything out via a huge stream of emails with Samsung’s UK technical labs.

This is all a far cry from the simplicity of the Viera Remote 2 app for Panasonic’s latest TVs, which brings multimedia playback and screen sharing into one easy-to-follow app, while also already delivering broadly similar functionality across both the iOS and Android versions of its apps.

We missed, too, the sheer intuitiveness of the Swipe and Share system of Panasonic’s app when it comes to shifting content between the TV and our second device.

To be clear about what we’re saying here, Samsung’s second-screen support is strong overall in terms of the quality of its video streaming and the amount of features available. It’s just a shame that accessing all of those features is made so complicated by the way Samsung hasn’t consolidated more functionality into a single app.

There really is an exceptional amount of stuff going on under the bonnet of Samsung’s latest Smart TV engine. And the boldness of Samsung’s attempts to streamline the ever-tricky process of finding content amid all the potential sources available these days is doubtless a vision of the future.

The fact that the Smart engine can be updated by Evolution Kits on F7000 and F8000 TVs to keep up with future iterations is hugely appealing too, and Samsung’s Smart TV content is still outstanding, especially when it comes to video streaming platforms.

However, we continue to be unconvinced about the viability of gesture and voice controls in a TV environment. Also at the moment some aspects of the interface feel rather obscure and confusing, potentially providing a barrier between the user and some of the features the Smart TV system can deliver.

We couldn’t help but think overall that it would have been nice if Samsung had taken a leaf out of Panasonic’s My Home Screen book by a) allowing users a bit more freedom in how the main menus are built, and b) providing a built-in tutorial to make it easier for users to get the most out all the high-tech goodies Samsung has to offer.