It’s customary now for the big AV brands to have some truly outlandish
bits of TV tech on show at CES 2015 to guarantee headlines from the
assembled media. This year, though, Samsung has not one but two cutting-edge TV behemoths it hopes will make passers-by drool: a 110-inch 8K
glasses-free 3D TV we’ll be reporting on separately, and a 105-inch TV
we’re looking at here, built using the brand’s new SUHD panel technology.

Not
surprisingly the 105-inch SUHD screen is hard to ignore –
especially as its ‘Timeless Gallery’ design is presented at CES on
two floor-standing easel-like legs and is built to a 21:9 super-wide
aspect ratio rather than the usual 16:9 one. With the support legs mounted right at each end you almost expect the ultra-wide screen
to start sagging in the centre. 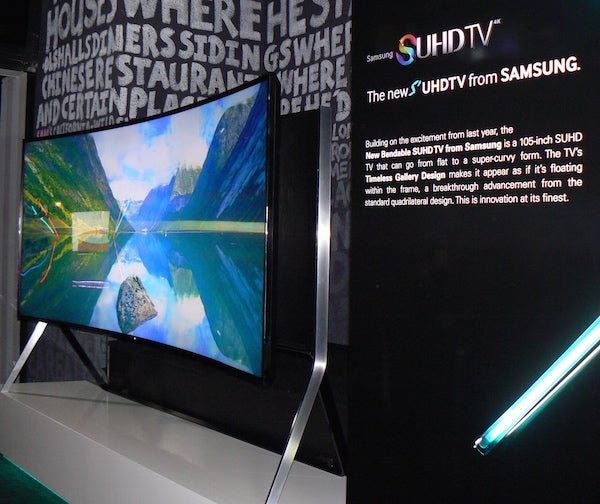 Actually
it’s even more robust than Samsung’s usual premium TVs, since the
screen is built within a secondary outer frame. Unlike LG’s new bendable
OLED TV, where the whole back curves along with the screen, Samsung’s
latest bendable screen curves away from a non-bending flat back panel.
This makes for a slightly less elegant effect when viewing the curving
action from the side than you get with the LG OLED. But then, of course, you typically won’t be standing at
the side of the TV to study its mechanics! Rather you’ll just be sat in
front of the TV admiring the way the screen is capable of curving
really quite markedly and then flattening out again without causing any
disruption to the image quality whatsoever. Except, of course, that if
you’re viewing from much of an off-axis angle you may feel the image’s
geometry is upset by the curved setting.

No matter how close we
got to the screen we could see no signs of stress in the panel
structure, and no sign of any distortion, stretching, colour upsets,
light leakage or detail loss in any part of the image, even during the
actual process of the curving/flattening movement.

This is made
all the more impressive by the fact that Samsung is achieving it with
LCD rather than OLED technology, given how many perfectly aligned layers
go into making an LCD screen.

You may recall that
Samsung has shown off a bendable 105-inch TV before. But this one is
significantly different to its predecessor, since it’s the first to use
Samsung’s new SUHD technology. As reported in our first look at the Samsung JS9500 and JS9000 models,
SUHD screens boost brightness versus Samsung’s previous LCD TVs by a
factor of 2.5, use a nanocrystal take on Quantum Dot technology to boost
colour response by 30 per cent, run at 10-bit for greater colour
mapping accuracy, and support playback of HDR (high
dynamic range) content.

Strangely the 105-inch TV on display at
the CES wasn’t running the remastered Life of Pi clips being shown ad
nauseam on Samsung’s smaller SUHD TVs. Instead we got a demo reel
of lots of lovely mountainous regions and views which didn’t, to our eyes,
look like it was genuine HDR content. 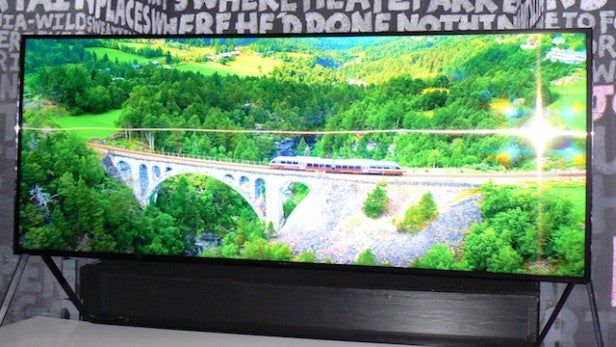 However,
it was still easy to appreciate the stunning brightness, vibrancy and
punch of the 105-inch SUHD panel. Coupled with the larger than life
dimensions of the picture and the screen’s lovely UHD/4K – sorry, 5K,
given the extra-wide ratio – resolution, you really do feel like you’re
there in the world you’re watching. Especially, we have to say, when the
screen’s ‘got its curve on’.

There are certainly still issues with the
curve, as we’ve noted in our feature on curved TV technology, but there’s
no doubt that the curve makes more sense on screens as big as this
105-inch one, genuinely enhancing your sense of immersion without
excessively limiting the number of usable seating positions in your room
or distorting image geometry too heavily.

The only issue is that
we did notice onscreen reflections distorting across a much greater
part of the screen area when using the TV in its curved mode than we did
in its flat mode. Though to be fair, the lighting conditions at CES
were much more harsh and likely to cause reflections than a typical home
lighting environment.

Samsung assured us that the bendable
105-inch SUHD TV really would be getting launched at some point in the
latter part of this year – though actually it’s said the same thing
about previous versions of the TV and they’ve never turned out to be
true!

One thing we can be certain of, though, is that if you
like the enormous cut of the 105-inch SUHD TV’s bendable gib, it’s going
to set you back a huge amount of money. In fact, while Samsung wouldn’t
be pinned down on a price, we wouldn’t be at all surprised if five
figures turned out not to be enough…