“Is it a bird? Is it a plane? No, it’s Samsung’s new 1000P Digital Photo Frame!” Okay, so maybe the 1000P can’t fly, but it certainly has many talents that elevate it to ‘super’ status in the usually somewhat humdrum photo frame market. These include a relatively high-resolution 10.1in display, media playback of audio and video, a dinky remote control, Bluetooth for wireless connectivity and – last but certainly not least – its ability to act as a secondary monitor when hooked up to your PC or laptop via USB. Read on to find out what else makes this 10in photo frame just a little bit special.

Well, first off there’s its design, which is head and shoulders above a lot of the competition in terms of looks if not usability. The piano black frame is mounted on a similarly-finished flat base via a single chromed hinge. The screen, which can be tilted at any angle or folded flat, is framed by a transparent cover that extends beyond its edges and is only 7mm thin (though the full thickness of most of the display is 12mm). This has been achieved by integrating all the 1000P’s connections, processing and speakers into the rather thick base. Samsung calls it ‘Crystal Swan design’, and while we’re not sure about the fowl connotation, it’s certainly very attractive.


Build quality doesn’t hold up quite so well. The frame and base are as solid as they come, but the hinge creaks and doesn’t feel as sure as we would like. Another minus-point is that its unusual two-part construction prevents the 1000P from being used in portrait orientation, something most photo frames will allow. 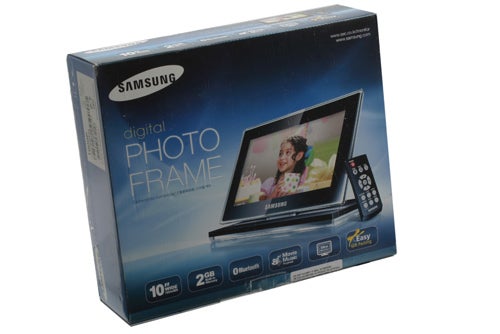 Samsung bundles the frame with everything you need, including its power adapter, a USB cable for using it as a monitor and the remote. One neat (if somewhat gimmicky) little trick is that turning the collapsible box inside out turns it into ‘gift packaging’, thanks to attractive colour printing on the inside.


The 2GB of integrated memory is not overly generous, but fair by photo-frame standards where 1GB is still the common norm. You can add more storage through the USB port or SD/HC memory card slot, which are neatly housed in the back of the stand. Here you’ll also find a mini USB connector for using the frame as a monitor, and a 3.5mm headphone jack to hook up external speakers or headphones.

Thanks to Bluetooth 2.0, you can not only instantly and wirelessly send pics from your mobile to the frame, but you can also listen to music stored there wirelessly using Bluetooth headphones. This provides for pretty much everything, though we would have liked to have seen CompactFlash-card compatibility.


Unfortunately, the 1000P takes a step back from Samsung’s previous photo frame we reviewed (the SPF-105P) in not integrating a battery, so it needs to be plugged in at all times. This misses one of the main conveniences of its predecessor, where you could carry it about and pass it along to others for closer inspection of your latest snaps.

However, having a remote control makes up for the lack of portability somewhat. In fact, with the 1000P its remote is more of a necessity than we would like, as the white-backlit touch controls integrated into its base might look great but aren’t the most responsive. Especially annoying is that they require you to pause between each touch, which can be tiresome and frustrating when wanting to navigate quickly. 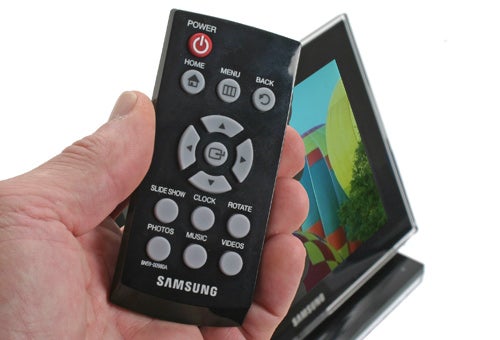 Thankfully then, the slim, light remote is mostly decent. It’s solidly built and well-sized to fit nicely in your hand despite its slim profile. Its soft-touch buttons are large, clearly labelled, and logically laid out, with crisp feedback. It takes a cell-type battery though, so no chance of using rechargeable units here.

Visually, Samsung’s OSD is almost identical to that found on its award-winning H03 Pico Projector, meaning it’s mostly clear and easy to navigate. The only fly in the ointment is that it can be very slow to respond, especially when trying to get through long lists, with this occasionally resulting in overshoot. Also, menu navigation is accompanied by annoying little noises, though this can thankfully be turned off. 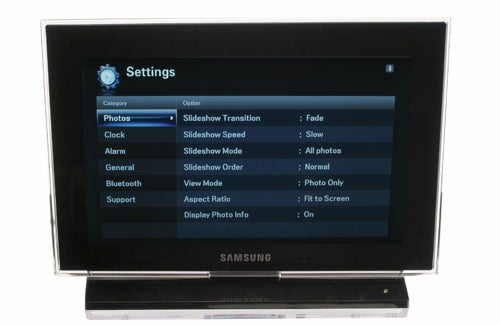 Most settings you might need are available, though screen adjustment is limited to brightness. Aside from this there are several general options including Bluetooth settings, a screen saver and clock. The clock is one of the frame’s nicer features, with several different styles to choose from. Our favourite is one that shows hand-drawn chalk figures drawn on a textured white background, but you can opt for more traditional digital or analogue options, with or without a full month-to-month calendar. The screensaver can be set to be the clock or a slideshow, or indeed an overlaid combination of both. 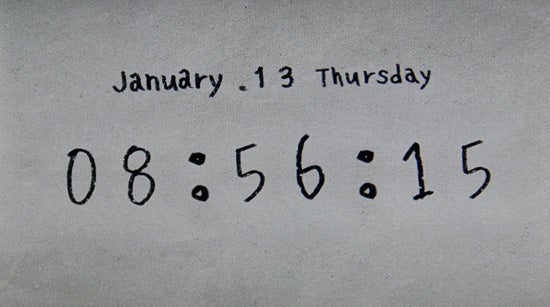 Photo options are naturally the most extensive. These include aspect ratio; displaying file information such as size; and slideshow speed, transitions and order, plus what music to play in the background. Photos are attractively displayed as a 8 x 4 grid of thumbnails. While browsing through photos you can select multiple files to copy or delete, or change the source media. Overall, the interface would be a success if it weren’t so sluggish on occasion.


File support is another area where we’re disappointed. In contrast to the Ho3 Pico Projector, which promised little but actually played back every video and audio format we threw at it without a hitch (up to 720p .mkv video), with the 1000P you get nothing but what it says on the box. Photo support is limited to JPEG and BMP, audio is MP3 only, and on the video front it only accepts standard definition M-JPEG or MPEG1/4. Unlike the Ho3 then, this won’t replace your media streamer any time soon. 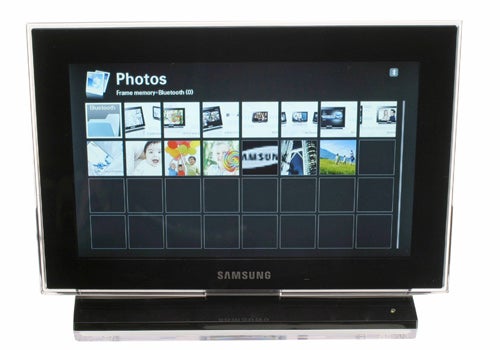 Meanwhile, the 0.7W stereo speakers are actually worse than we were expecting, and our expectations were pretty low to begin with. While they manage to be louder than their size suggests, they distort badly. Even at low volumes sound is shrill and harsh, lacking in both clarity and subtlety, while bass is banished to an alternate dimension.

Thankfully, the strongest element of the 1000P – aside from its undeniably classy looks – is the picture quality of its 10in (actually 9.8in visible) screen, and it is here that we see the biggest improvement over the SPF-105P. Sharpness is excellent due to its relatively high 1,024 x 600 resolution, contrast is surprisingly good, viewing angles are strong for a TN-type panel (though they won’t come close to those of Apple’s iPad) and there’s little sign of light bleed or inconsistency. That said, colours are oversaturated and far from accurate, while the screen’s glossy layer can cause distracting reflections. 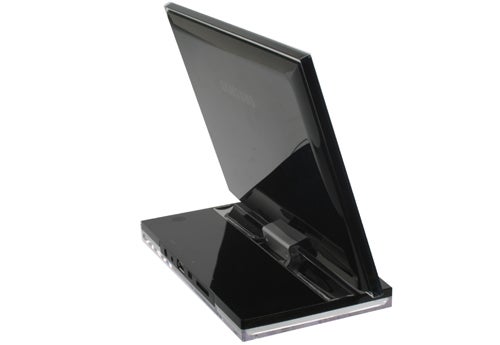 This strong image performance makes up for a lot of the 1000P’s shortcomings, especially when you consider its most interesting secondary function: that of a DisplayLink-enabled monitor. We’ve covered DisplayLink before in products like the neat little VillageTronic ViBook, but essentially it facilitates you hooking up the frame to any netbook, laptop or desktop with a USB connector to turn it into a secondary display. This is especially handy with netbooks, with most of which Samsung’s photo frame matches size and resolution (and will exceed in quality), and where you would most want to extend your desktop. You can then, to give but one example, watch a film on one screen while leaving the other free for IM and browsing, or extend spreadsheets across both. 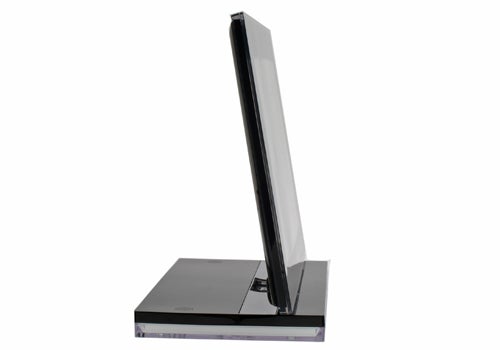 However, as with the SPF-105P, this multi-functional frame doesn’t come cheap. At £160, the 1000P is at the high-end of its market, and lacks features (such as built-in Wi-Fi) that lower-priced competitors do offer – not to mention its lack of battery, flimsy hinge, inability to be oriented in portrait mode and severely limited media playback.


On the other hand, it makes up for this with its classy design, good remote, excellent image quality, Bluetooth and secondary monitor functionality. As with the previous Samsung effort then, it’s very much a matter of horses for courses. 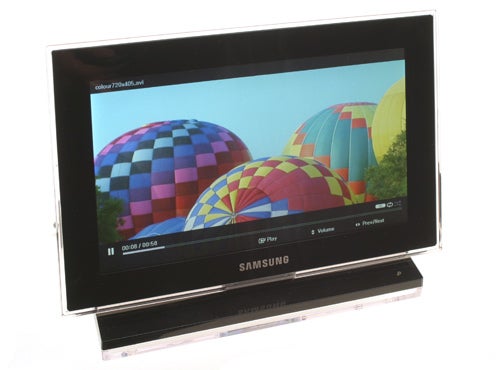 
Class-leading looks and image quality, combined with a few unusual but useful features, mean the Samsung 1000P is worthy of an audition if you’re looking for a good photo frame – even if its high price and some annoying flaws keep it from being a recommended buy.