What is the Samson Meteorite?

Portable USB microphones are a dime a dozen these days but one of the finest we’ve ever encountered is the Meteor Mic by Samson. Now the company has released a new, even smaller addition to its lineup, and it’s called it the Meteorite. 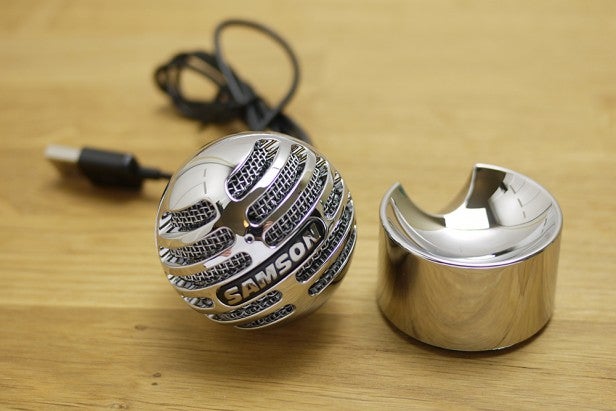 Like the Meteor Mic, the Meteorite evokes memories of classic rock and roll microphones such as the Shure 55SH, with its chunky outer shell and inner lining of protective grilles. However, here that outer construction isn’t hard-wearing steel but plastic, covered in a chrome finish.

The shape here is different too. The microphone itself is totally spherical and it sits in a concave stand – also chromed plastic – that allows it to be moved around so as best to point the microphone in the right direction. A magnet helps the two stay together while allowing enough movement for easy adjustment. 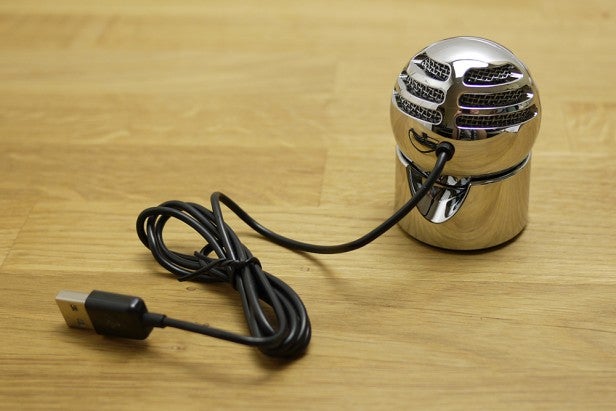 A notch at the back of the stand allows the microphone to be tipped upwards without the cable snagging, making it easy to place the mic on a table and direct it towards your mouth, rather than your chest.

The overall system works well but the separate stand and tethered USB cable do take away some of the portability appeal with the former being one more thing to lose and the latter making it less easy to tidy away the cable. Samson also doesn’t include a carry pouch like it does with the Meteor Mic. All understandable compromises for the price but compromises nonetheless.

A tiny LED sits above the Samson logo and glows blue when powered, turning red when the microphone is peaking.

There really is very little to the Meteorite in terms of features. It’s a USB mic. No more, no less.

What features it does have thus pertain to the quality of its microphone and analogue to digital converter.

According to Samson this microphone has the same frequency response as the Meteor Mic, at 20-20,000Hz and has the same sampling rate of 16-bit at 44.1/48kHz. However, the Meteorite uses a smaller 14mm diaphragm (compared to 25mm).

The pickup pattern is cardoid – standard front facing – so is suitable for typical USB microphone tasks such as recording single voice for podcasts and such like. It can also turn its hand to recording musical instruments so could work for recording your latest acoustic hit. However, it’s less suitable for interviews or group recordings that require omni-directional pickup patterns.

Because it draws so little power this microphone can be used with iPads, with the help of either Apple’s Lightning USB Camera Adapter or Camera Connection Kit (30-pin). 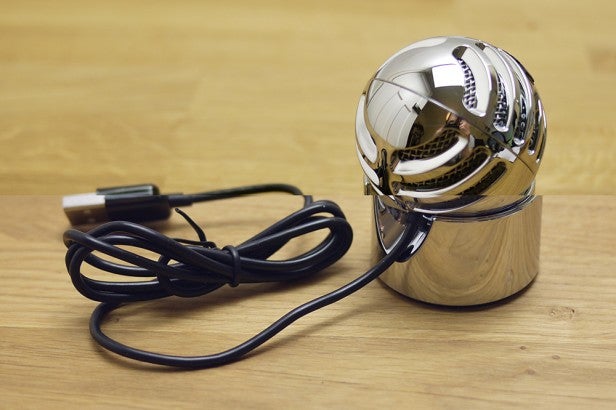 Setup of the Meteorite is effortless. It’s instantly recognised as a standard USB microphone by PCs, Macs and iPads. All you’ll need to do is set it as the default device and set its recording level.

At 90cm the cable offers about the right compromise between short enough for easy portability and long enough to not limit your setup options. It’s certainly not the toughest cable we’ve ever encountered and we can definitely see the point where it enters the microphone being a point of failure. But, that is, after all why it costs so little.

As for its sonic performance, we tested the microphone by recording spoken word, singing, amped electric guitar, acoustic guitar and a full rock band playing in a rehearsal space with drums, multiple guitars, bass and vocals to see what it could cope with. The results were impressive, with it proving suitable for a wide range tasks.

The one thing it is least suitable for is recording really loud material like the band practice session. We simply found it couldn’t go low enough, in terms of recording level, to not distort. In comparison, the Meteor Mic is just able to cope with these high volumes — 3 out of 100 on the Windows scale was how much we still had to turn it down.

As for audio quality, it’s very good, and is easily enough for the sort of jobs it’s meant for: podcasting and rough recording while on the road. However, certainly in comparison to the Meteor Mic there’s a clear lack of depth to its recordings. As demonstrated in the video below, the Meterorite simply doesn’t pick up the bass tones in our acoustic guitar test creating a much more shrill, brittle sound.

It’s still good but doesn’t have the pleasing tone of the Meteor Mic. Then again, that’s why it costs half as much – less than half going by MSRP.

Comparing to other microphones of a similar price the Meteorite is easily on par with or beyond most of the competition. 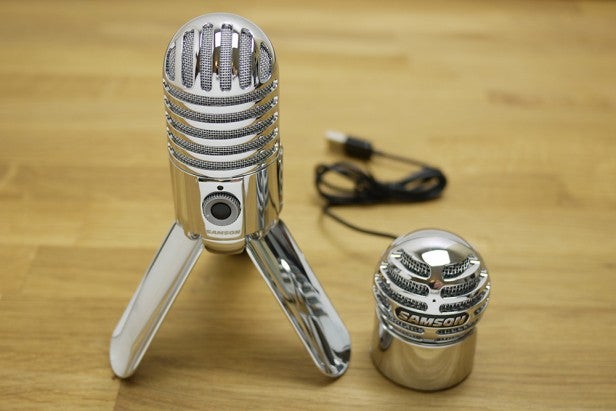 Should I buy the Samson Meteorite?

The Samson Meteorite is a cracking little portable USB microphone that will be perfect for those that want to take the first step towards higher quality audio recordings. It’s incredibly portable, easy to use and provides good quality sound.

However, we definitely aren’t as enthusiastic about the Meteorite as the Meteor Mic, with it lacking the stunning design and build quality that really set that model apart. It’s also clear, comparing the two, just how much you are missing out on in terms of sound quality. We also have a few concerns about how long the cable will hold up.

As such, remotely serious musicians looking for a portable microphone should probably save a while longer and go for the Meteor Mic. But for those that aren’t yet too demanding, this is among the best portable USB microphones available.

A very good portable mic, albeit one better suited to casual use rather than more demanding recordings.