Microphones don’t normally get the glamour. When it comes to making music it’s all about the things that, well, make the music: the guitars, the drums, the keyboards, the saxophone, the piano, the violin, the voice, the triangle even. All the while the humble but hard working microphone is left in the background soldiering away, often being abused and seldom praised. Not so today, though. Today the microphone gets to sit centre stage and take all the plaudits thanks to one of the cutest products we’ve ever reviewed, the Samson Meteor Mic.

This USB microphone is a portable recording artists dream. With dimensions of 80 x 49 x 49mm it genuinely fits in a pocket, it’s totally plug and play and it produces sublime recordings. But moreover, just look at it! 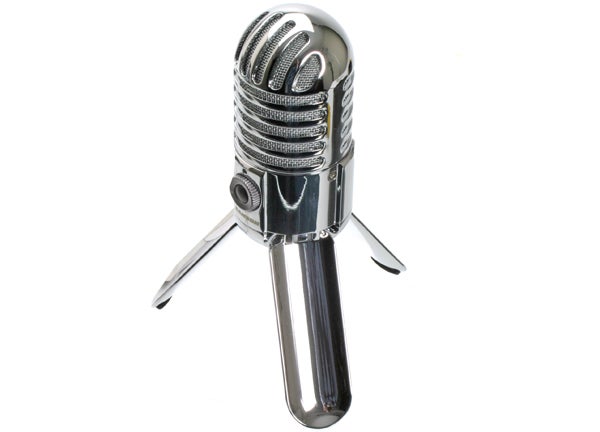 Built from thick plates of chromed steel and styled like a classic Shure 55SH side address mic, it just oozes retro class and feels incredibly solid too, yet it only weighs 263g. It’s the clever leg design that really brings a smile to the face, though – it’s just such an elegant piece of engineering. The three legs fold up to sit flush with the sides of the mic to create a teeny tiny form that can then slip easily into a jacket pocket or bag. You can also use the legs to hold the mic at a different angle, dropping a couple of legs lower to angle the top more towards or further away from you.

A small velvetine bag is provided in the box for keep the whole thing from getting scratched and protect it from light knocks. For more regular use on the on the move, you may want to invest in a more sturdy bag or case, though. 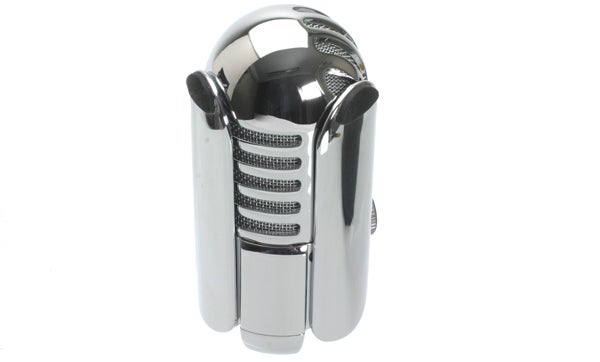 The mechanisms of the legs feel as sturdy as you’d expect from a piece of professional equipment, and once deployed they keep the mic firmly planted. A little semicircle of black rubber is stuck to the end of each leg to stop the mic slipping or rattling against any hard surfaces, and it reduces vibration transfer as well. It isn’t enough to totally isolate the mic but assuming you’re not clumsy enough to knock the table you’re working on – and assuming you’re in a relatively quiet environment to start with – you should get noise free recordings. If you do decide a mic stand would be a better bet then there’s a standard 5/8″ mic stand thread on the bottom.

Sadly the little rubber feet are the only area where this mic’s build falls down. They’re just stuck on with glue, and not recessed or gripped in any other way, so can peel off if harshly knocked. It’s a simple enough task to glue them back on, though. 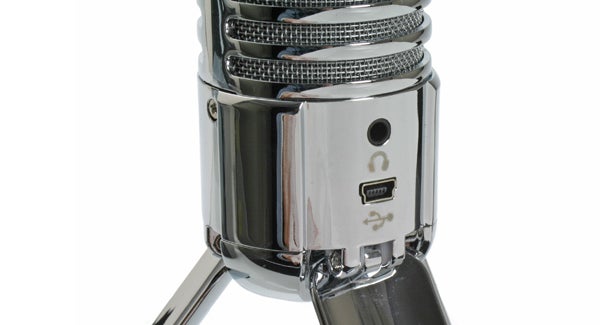 The suggestion of high build quality continues when you peer between the gaps in the thick steel grilles. Behind here is a double layer of fine wire mesh that is plenty sturdy enough to keep protected the delicate parts inside.

Those parts consist of a 25mm diaphragm condenser capsule with cardoid pickup pattern (i.e. front facing) and flat frequency response along with a “CD quality” 16-bit, 44.1/48kHz ADC and USB interface. This combination provides a high quality recording experience, with a ridiculously easy setup – just plug into a computer via the miniUSB socket (a miniUSB to USB cable is provided) and it will be automatically recognised as an audio input, whether you’re running Linux, MacOS or Windows.

As well as having this instant digitised music stream for you to use with whatever music software you prefer, you can also plug headphones directly into the mic for real time monitoring. You can control the volume of your headphones via the volume dial that sits around the power/mute button – the mic’s powered from the USB connection. You can’t, however, control the recording volume level from the device but must instead use software to do this. Meanwhile there’s a small LED above this that indicates the device is powered, and also flashes red when the mic is peaking, giving you a quick indication of when you’re pushing volume levels too high. 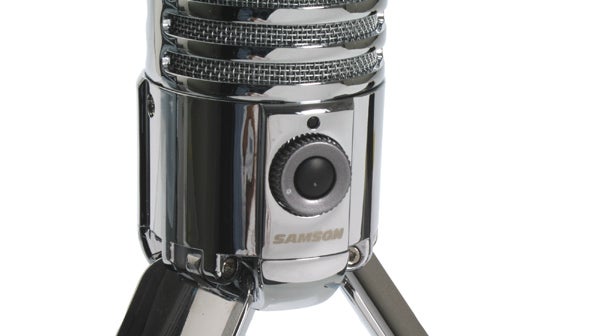 You can also use the Meteor Mic with iPads by plugging it into the dock connector via a USB adapter. Many USB mics won’t work on the iPad as they require too much power, making the Meteor Mic a particularly desirable product.

So that’s what the Meteor Mic does, but for any serious recording artists the key question is how does it perform, and the answer is very well indeed. We put it through its paces recording acoustic guitar, clean male singing vocals and shouty heavy metal vocals, electronic piano, electric guitar, some bongos and a pretend podcast, and it did a cracking job with them all. 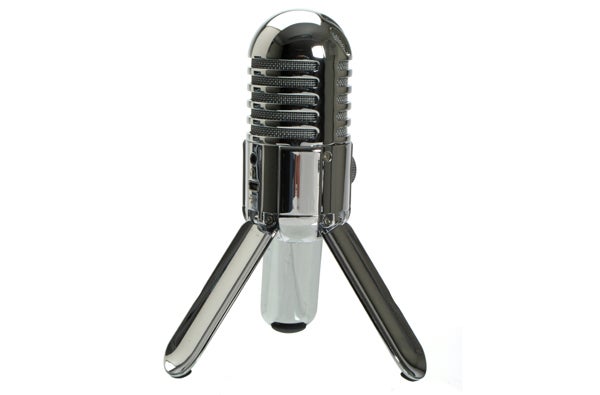 Clearly specialist mics are still going to be your best bet for certain applications – certainly doing proper drum takes is going to be beyond the capabilities of a single mic like this, though you can of course overhead mic for a basic take – but particularly for recording solo work, it’s excellent. Group recording is also going to be limited by the lack of stereo imaging – given this is a mono microphone – but you can easily use two or more simultaneously to open up many more options in this regard. 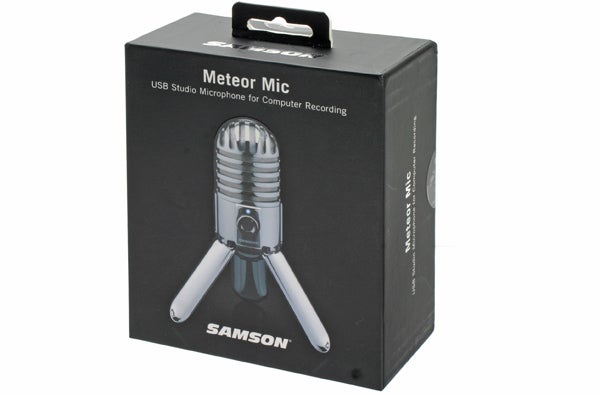 The 16-bit/44KHz sampling rate is technically below that provided by some really high end equipment – for instance the Blue Yeti Pro that I’ll be looking at shortly has 24bit/192KHz sampling – but it’s still more than sufficient for casual and even quite professional work. It is, after all, the same sampling rate used on CDs.

Where the Meteor Mic does fall down, then, is in its versatility. If you want a mic that can double as being part of your home recording setup, where you may have a proper microphone preamp, then the lack of an XLR (or any form of direct) output is a bit of a shame. Likewise, the lack of onboard gain control may feel limiting in some scenarios. Overall, though, for £99.95 we think it offers enough to make for a good deal.

”’Verdict”’
The Samson Meteor Mic is one of the most charming products we’ve reviewed in a long time. Its superb styling, high build quality, ease of use and great sound quality combine to make for a hugely desirable addition to any home recording artist’s arsenal. If you want an easy, portable microphone for recording while travelling or just when at home, we can think of few better options.