Why make a fuss about a couple of silly point-and-click graphic adventure games featuring a dog detective and his psycho rabbit sidekick?


If you don’t already know the answer, it’s time for a quick trip through the archives of gaming history. Once upon a time, before acronyms, feature tick-boxes and lazy franchises ruled the world of PC gaming, point-and-click graphic adventures were pretty much the bees-knees of interactive entertainment. A number of companies did great work in the field – Sierra with the Kings Quest and Gabriel Knight series, Westwood with the Kyrandia trilogy (and the superb Blade Runner – ed.), Revolution with Beneath a Steel Sky and Broken Sword – but the undisputed kings were LucasArts. 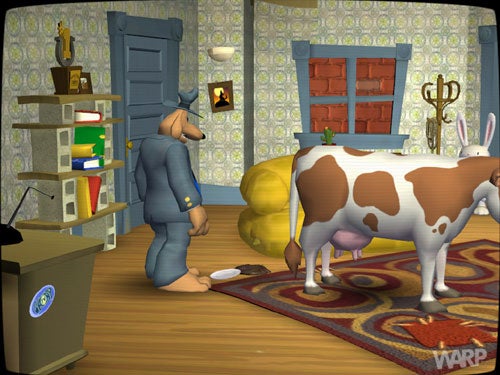 Between 1989 and 1993 the company had a sort of golden age. Beginning with Indiana Jones and The Last Crusade, running through The Secret of Monkey Island 1 and 2, Indiana Jones and the Fate of Atlantis and finishing up with Day of the Tentacle and Sam and Max Hit the Road, the Lucasfilm offshoot created a series of adventures that were ludicrously funny, finely balanced and full of the most ingenious, multi-layered, lateral-thinking puzzles known to man. The good work didn’t stop there – Curse of Monkey Island and Escape from Monkey Island were enjoyable, a Stephen Spielberg collaboration, The Dig, is an underrated near-classic, while the 3D Grim Fandango was a classic, full-stop – but the 1989 to 1993 games are the ones that most old-school gamers remember most fondly when they think of the classic point-and-clicker. And Sam and Max Hit the Road is among the most loved of the lot. 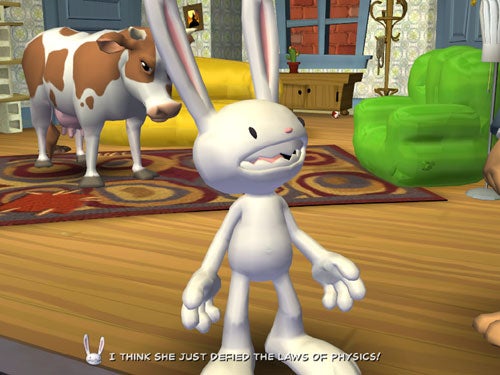 This fact accounts for the sadness when, having promised a Sam and Max sequel in 2002, LucasArts pulled the plug less than two years later, not to mention the happiness when in 2005 Telltale Games, a small developer boasting a number of old LucasArts staffers, announced that it would release a series of episodic games featuring the duo. The first two episodes are now online, and if you either miss the old LucasArts adventures or didn’t have the fortune to experience them in the first place, then you owe it to yourself to download them. 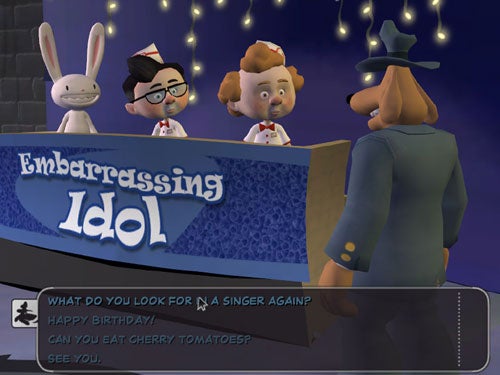 You see, it might not say LucasArts on the box (well, being downloads there is no box) but these games are full of the same great stuff we knew and loved back in the day. I’m not suggesting for a minute that the Sam and Max episodes are dated – the lovely cartoon graphics are now in full 3D, the command interface has been paired down to a minimal system of context-sensitive clicks – but you still control the game with mouse and cursor, and each screen remains full of the rich, frequently funny background detail that characterised the classic LucasArts games. In fact, you’re often left wondering why LucasArts ever abandoned the point-and-click style for the slower-moving 3D system they pioneered with Grim Fandango; as Sam and Max show it’s so much speedier and more intuitive, and so much better suited to how you actually play the game.

Best of all, the old humour is still there. The best LucasArts adventures were characterised by their distinctive wit: often surreal, always deeply knowing, and packed with in-jokes, clever non-sequiturs and simple, stupid sight-gags. Are the Sam and Max episodes on the same level as Day of the Tentacle or LeChuck’s Revenge? Not quite, but nothing in recent years – with the possible exception of Tim Shaffer’s Psychonauts – has come anywhere near as close. What’s more, what made Hit the Road different from those aforementioned games was its darker, nihilistic, wickedly satirical edge; something bound up with the characters of Sam and Max themselves, their love of unnecessary (albeit cartoon) violence, and their vicious deconstruction of American cultural mores. Neither Culture Shock nor Situation: Comedy has missed this, and while neither game is able to maintain a consistent string of belly laughs for long, the fact that you’re laughing at all, and grinning most of the time when you’re not laughing, gives you some indication of how enjoyable both episodes can be. 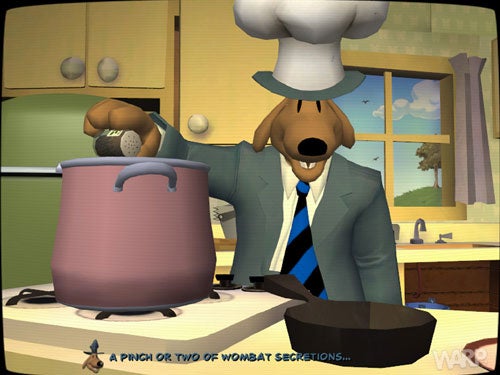 Of the two, Culture Shock, with Sam and Max up against a trio of hypnotised ex-child TV stars, is probably the best. The script is tighter, the laughs are more frequent and the puzzles are that little bit more engaging. Situation: Comedy is hardly a disappointment, however. It’s still highly entertaining, some of the gags are fantastic and the game’s best idea – placing puzzles within the context of our heroes making appearances in a number of TV programmes, parodying sitcoms, talent shows, quick shows, talk shows and cookery programmes – is executed very well. Both episodes also benefit from an absolutely belting sixties jazz score. Just like the original game, in fact. 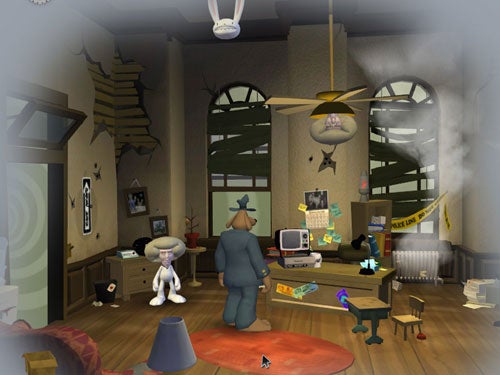 Where both games fall down can partly be put down to limitations of budget and of the episodic format. It has to be said that neither episode is exactly feature-length. Culture Shock can be clocked in around three to four hours, depending on how familiar you are with graphic adventures and their ways, while Situation: Comedy will probably take you half an hour less. That’s not too much of an issue considering the £5 price tag – and even less so if you pay $37.95 for the six-episode ‘season’ as a whole – but there is a feeling that you’re only just getting into each story when it ends. More seriously, each game only has a very limited number of locations, and there is a little too much reuse going on from game to game. We expect recurring characters in a series, but it’s slightly disappointing to see the same people and places crop up so heavily in both episodes, in some cases with precious little revision. Even the unique locations offered by each – a ‘home’ for ex-child stars in Culture Shock, the TV Station in Situation: Comedy – are fairly limited affairs. It would be nice to see more new stuff turn up when Episode Three hits town. 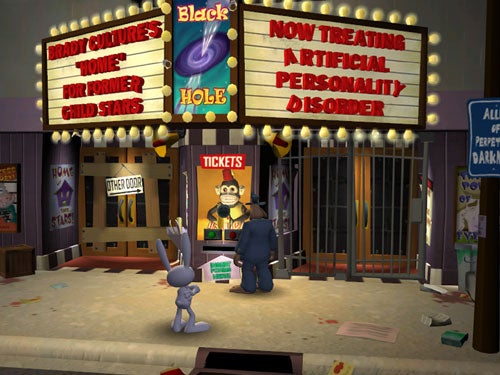 The only other minor disappointment is the puzzles. At least Sam and Max don’t have to confront the overly obscure efforts that blighted the recent Broken Sword: Angel of Death, and there are a couple of real humdingers to scratch your head through, but the new Sam and Max episodes seem to lack the complex, multi-faceted puzzles that made LucasArts’ best adventures – particularly the Secret of Monkey Island games – so hard on the brain, but so delightful once you found the solution. There are whole chunks of each episode that anyone with even a basic background in adventure games will swan through, and when each serving is so relatively small, that is a bit of a concern. 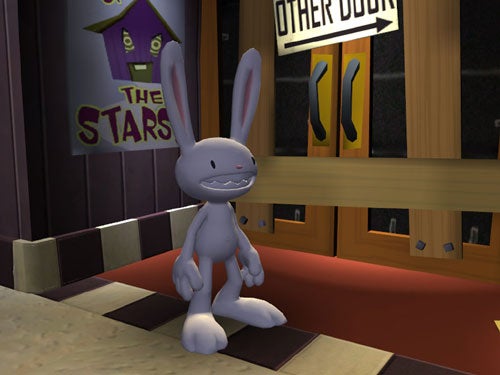 But don’t let anything I’ve said in the last two paragraphs put you off going to www.telltalegames.com and putting in your order. These aren’t flawless gems by any means, but Telltale Games has done something that fans of the point-and-clicker have been wishing for for over a decade: it has resurrected the spirit of the LucasArts adventure and given it new 3D flesh and bone. So why make a fuss about a couple of silly point-and-click graphic adventure games featuring a dog detective and his psycho rabbit sidekick? Because they not only take you right back to the good old days of PC gaming, but also make you realise that the values enshrined in those games – humour, character, intelligence, respect for your audience – can still be just as relevant today. You tell me – isn’t that worth making a fuss about? 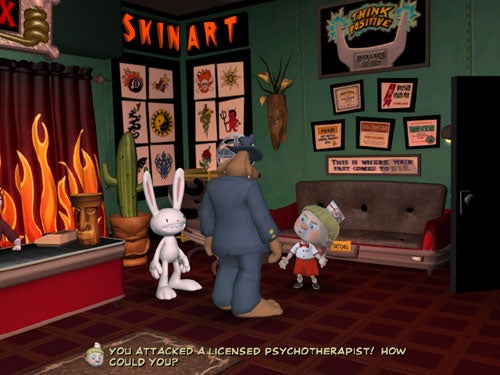 
Not quite the second coming of golden age LucasArts, but certainly a step in the right direction. Essential downloads for the thinking PC gamer.