When it comes to gaming peripherals, Saitek is a name that’s right up there with the best of them. However, while it’s strongly associated with gamepads, joysticks and wheels, it’s not really known for its mice, leaving that area to the likes of Microsoft and Logitech. In fact, Saitek only has one current mouse on its roster at the moment and that’s this one, known quite informatively, as the Saitek PC Gaming Mouse.


The Saitek’s big selling point is that it offers increased resolution over standard mice – 1,600dpi rather than the conventional 800dpi. This is in keeping with the resolution on offer from the likes of Razor Diamondback and Logitech’s gaming mice. 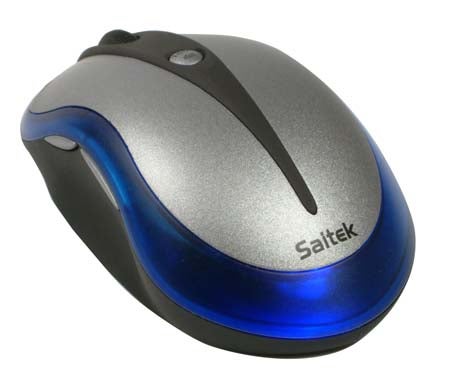 The Saitek is a very bulbous object, wide and high at the rear and tapering down towards the front. There are no actual visible buttons but instead the front of the mouse just presses down. This makes more of an aesthetic rather than functional difference however. It’s not specifically moulded for a right handed person like most specialist mice are and on the Saitek web site it claims to be “designed for left and right-handers”. It is the same on both sides save for their being one long button on the right hand side and two on the left. For a right hander the two buttons on the left will fall nicely under the left thumb but for a left-hander these can only be awkwardly adjusted by the ring finger. A grooved wheel sits towards the front with feedback provided with a click motion.

The sides are rubberised and whole mouse has a blue trim with the rear lit up with a blue and rather garish backlight. Saitek has also supplied a very generous 2.13 metre cord. I dislike it when cords are restrictively short.


The real business though is the button at the top of the device, labelled 1600dpi. Pressing this switches the optical resolution from the standard 800dpi to the full 1600dpi. The reason you’d want this is because for regular Windows use 1600dpi will just be too sensitive causing the cursor to leap too quickly round the screen. 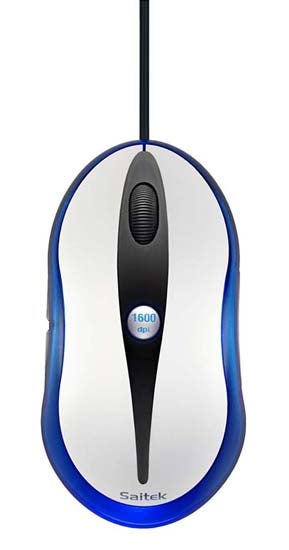 Launch a game though, and this ultra sensitivity is just what you want. That said, it is only after you’ve got used it. If you’re used to a standard mouse, at first the extra sensitivity makes things very hard to control, even if you turn down the in-game mouse responsiveness slider. At first playing Counter-Strike: Source, I was all over the place with the Saitek, and couldn’t easily control my movement, making me considerably worse. But stick with it and your patience will be rewarded. The extra resolution does make it easier to pick off opponents at a distance and once you’ve got used to it your kills will start to rack up, (assuming you’re not a rubbish ‘noob’) and you won’t want to go back to a standard mouse.


As fun as it is to press the 1600dpi ‘turbo’ button, with it’s cool blue light, it’s not as sophisticated as the Logitech, which enables you to alter your mouse sensitivity on the fly; the 1600dpi is either on or off, take it or leave it. However, it’s still a plus to be able to toggle it in game.

Jumping into the game I found that the Saitek seemed a bit too light in the hand, despite its size. It’s certainly lighter than my regular stock Logitech three button wheel mouse. In its favour though it really does glide incredibly smoothly across the desk or mouse mat.


However, no sooner had I joined a Counter-Strike server, than I found that I’d been dumped back to the desktop, with a hexagonal icon having popped up. At first I didn’t know what this was or how to get rid of it. It turned out that by default the side buttons are mapped to shortcut wheels. Each section is a shortcut to an application of choice so instead of having to go down to the start menu and scroll through a list of programmes you can open what you want quickly. This is great for things like Notepad, the Dos Prompt, Calculator or whatever you want but it’s not so great when your playing a 3D game and I didn’t appreciate being unceremoniously dumped back to the desktop. It’s certainly not what I’d expect from a supposedly ‘gamers’ mouse. To get rid of this you have to go into the options of the bundled driver (a shortcut sits in the system tray) and set the keys to ‘Normal Function’ rather than the default. 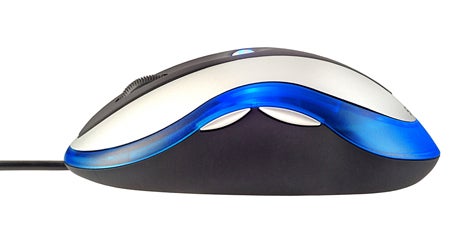 Also irritating is that to get the wheel to scroll in browsers and Word you have to manually enable the ‘Compatible Scroll’ option in the driver and increase the rather useless default single line scroll setting. Why Saitek has set this up as a default is beyond me.


Another point is that the software doesn’t look as slick as that from Logitech or Razor, with a rather hokey feel to the design, if not the functionality. It’s worth bearing in mind that at the time of writing the software is not available for download so if you lose your disc you’re stuffed.


While the programmability is good, ultimately what’s important is how comfortable the mouse feels in the hand. For me I found that the Saitek sat too high up in the palm. By contrast I had a quick play with a Razor Diamondback and much preferred its elongated shape. It’s long and thin rather than high and round, which just suits the way I hold a mouse. Despite Saitek’s claims for its mouse, the Razor is also more suited to the left-hander as it’s completely equal on both sides.


The Saitek is undeniably attractively priced at only £26.99 but what makes a good mouse really does come down to personal preference. Personally I’d spend more and go for a Razor Diamondback. But if you can give the Saitek a try in a store and like its feel, then you won’t be disappointed – at least once you’ve taken control of the unruly software.