Saitek is a brand well known for its gaming controllers but it might come as a surprise to find that it also offers gaming keyboards. What, you may well wonder, actually is a gaming keyboard. After all, most keyboards have the keys in more or less the same place and can be used for any game. This is certainly true, but with the eclipse, Saitek has cleverly latched onto the fact that many gamers like to play in the dark. If you’ve ever fired up a scary game with your headphones on, you’ll know how effective a dark environment can be to really draw you into the game. 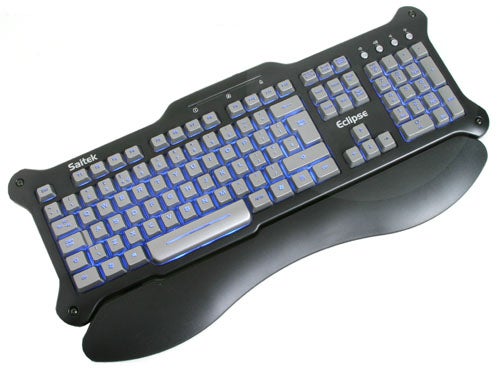 The flaw with this scenario though is a rather prosaic one in that if you’re playing in the dark, it makes it rather difficult to see the keyboard: which is something of a problem. I can vouch for this, having on many occasions found myself pouring over the keys from the light of the monitor to find the desired one, only to give up and turn a side light on. In the heat of battle, this is not what you want to be doing. So Saitek has come up with a neat solution to this little conundrum – a keyboard with backlighting.


The Eclipse is actually the second attempt, with the first – the imaginatively titled ‘Gamer’s keyboard’ offering something similar. However, this one is superior in that the cool blue backlight actually shines through the keys themselves. The keys are silver with the letter shapes cut out, enabling the blue light to shine through. The silver against black effect is really rather cool, but the Eclipse really does look its best in the dark. I must admit to having blue lighting shining from the front of my Antec tower case, and in combination with the blue lights of a Razer Diamondback mouse, it gives a cool, futuristic look to the system. This is helped by the spacey design, with spoke-like corners and moulded sections around the lights at the top and the space bar. 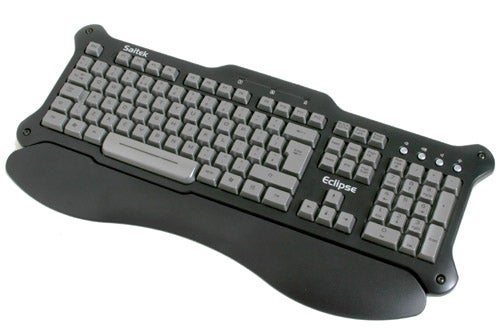 Saitek has dispensed with the separate keypad that its previous model had, but that’s no real loss. The layout is otherwise conventional. You might think that along with a flashy blue light Saitek would choose to festoon the keyboard with dials and buttons, in the manner of many Microsoft and Logitech keyboards. In fact Saitek has kept things tastefully simple with only has four buttons. In my opinion this is a good thing as often by the time you’ve worked out what shortcut key does what and where it is, you’d have been quicker just launching the application in the regular manner anyway.

Two are for volume up and down and one is for mute. The fourth switch, lowers the backlight to a dimmer setting, so you can enjoy the cool blue effect in a brighter lit room. Alternatively, a further press turns the backlight off altogether, turning the Eclipse into a normal, but smart keyboard. My only wish is that the default backlight setting was actually off – instead when you boot your PC the backlight is on, so that in most situations I find myself having to press the button twice to turn it off. This is necessary as in normal lighting conditions the backlight actually makes the keys hard to see.


I’m pleased to report though that as a regular keyboard the Eclipse is really very fine. This is good as though as a USB keyboard it’s easy to plug and unplug it at will, you don’t want the hassle of having to use one keyboard for regular stuff and another for games, unless of course, you really want to. 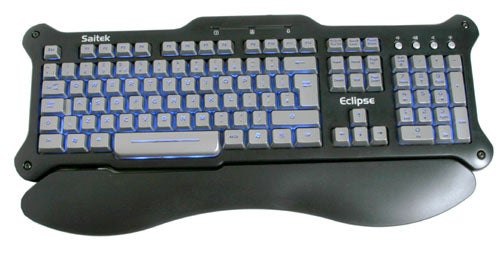 The keys feel nice to the touch with a good responsive action and I was able to type comfortably. If I were to nit-pick I would say that the keys are a touch looser than they should be. Comfort is aided by two stands that enable you to prop the keyboard up, or if down, make the keyboard lie flat on the desk. In fact the top of the keyboard appears to taper downwards in this position though that could just be my eyes deceiving me.


Pleasingly though, Saitek isn’t charging a fortune and CCL Online, who kindly sent this sample for review are offering it for only £33.10. So simply then, this makes the Eclipse my favourite keyboard I’ve yet used, as a fixture on my home PC. It’s comfortable to type on, it’s smart, it’s affordable and it ”glows in the dark!” What more could you want?