Saints Row The Third Remastered is a decent upgrade of an open-world classic, although doesn't soften all of its rough edges to properly take advantage of modern platforms.

Saints Row The Third has always been considered Volition Studio’s magnum opus. It struck a perfect balance between self-indulgent excess and brave new ideas, forming to create a compelling parody of the open-world genre. What started as a playful riff on some of gaming’s biggest franchises morphed into something equally ambitious and something that stands the test of time after all the years.

Well – most of it has. Saints Row The Third Remastered is a faithful revival of the 2011 original, translating the city of Steelport and all its jankiness over to new platforms with a shiny new coat of paint. It’s a wacky adventure worth revisiting, even if its juvenile sense of humour and somewhat archaic combat hinder what could’ve been a truly stunning remaster. 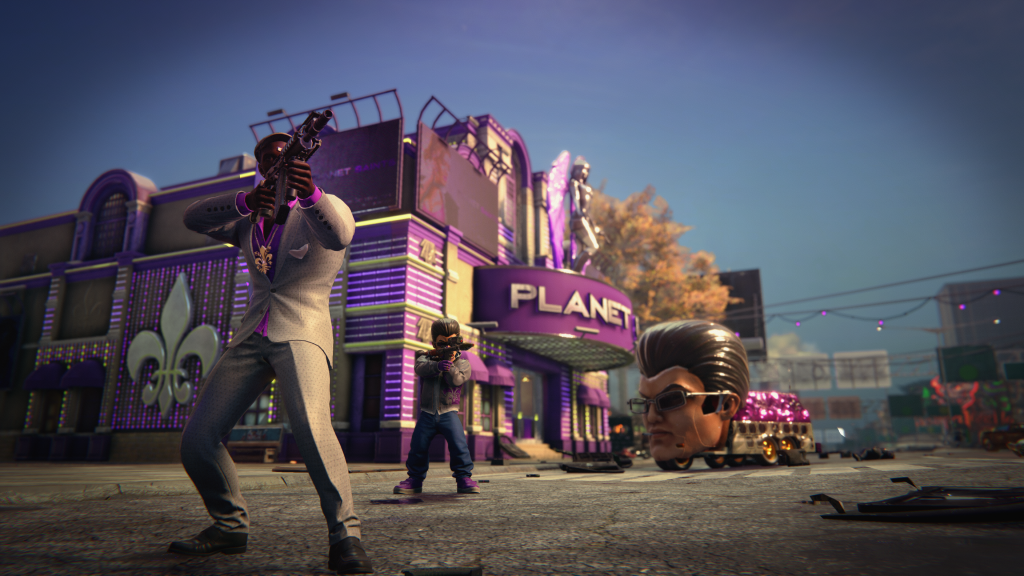 While its predecessors were largely straight-laced escapades into a fictional city’s criminal underworld, Saints Row The Third abandons any pretence of seriousness in favour of a world and characters that constantly poke fun at themselves. The small-time gangsters are now global celebrities starring in Japanese commercials and flogging merchandise through tacky storefronts spread across their city. They aim to make money and look good doing it.

As “The Boss” you will lead the Third Street Saints to their greatest success yet, taking over the city of Steelport and fighting anyone foolish enough to stop you. This ranges from paramilitary companies to actual zombie outbreaks, with your crew dealing with each increasingly absurd development like another day at the office. Such a tone helps the majority of dialogue feel hilarious, with most lines hitting even if some ageing references fall by the wayside.

What helps Saints Row The Third Remastered shine is its fantastic cast of increasingly bizarre characters. There’s a professional wrestler turned hostile gang leader or a pimp that speaks entirely in autotune, cruising around his neighbourhood taking out haters with some dulcet tones. Many of these characters have their own distinct missions where you’ll tag along with them while progressing through the main campaign, which itself constantly surprises with how genuinely bizarre it becomes towards the final act. 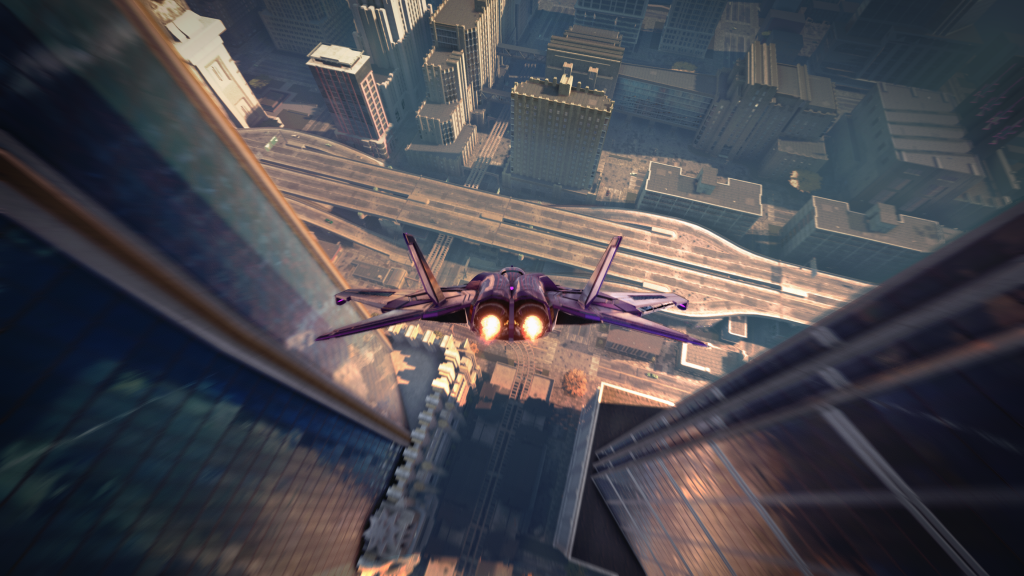 While its personality and characters have aged quite wonderfully, the moment-to-moment gameplay of this remaster is firmly stuck in the past. No major improvements have been made and some additional visual blemishes surfaced during my playthrough on Xbox One X. Parts of the sky would flicker at random, while driving at high speed towards certain obstacles would cause my vehicle to get stuck in the terrain before exploding into a ball of flames.

These glitches aren’t breaking the game and even had me giggling, but their presence is strange given Saints Row The Third is pushing a decade old. Similar critiques can be thrown towards movement and gunplay, both of which feel thoroughly cemented in the last generation. Gunplay lacks impact, while movement oftentimes feels stilted and unresponsive. Constantly running out of stamina and having your sprint slow to crawl just feels frustrating, failing to deliver the power fantasy being at the top of a criminal organisation should express.

Once you’ve obtained a few upgrades many of these issues address themselves, but it results in a few strange difficulty spikes bubbling to the surface, exacerbated further by some downright dated mission design. If you don’t follow the objective parameters set out by the game exactly, you’ll have to start from the most recent checkpoint. Niggles aside, each mission still presents an enjoyable romp of gorgeous explosions and foul one-liners which match the atmosphere perfectly. 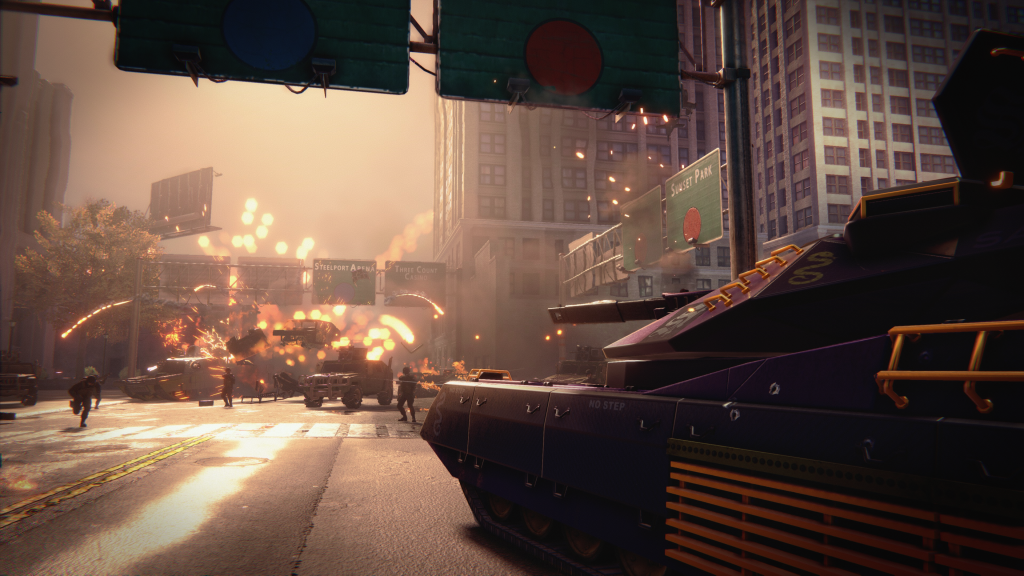 Some of my personal mission highlights involve parachuting onto a penthouse roof to the rhythms of Kanye West’s Power, gunning down a rival gang as The Third Saints make their first major splash on the city of Steelport. It exudes a sense of epic grandeur that’s genuinely unmatched in the genre, largely because Volition knows exactly which bangers to blast in the moment to get you hyped.

The campaign is filled with excellent moments like this, which arguably make up for the archaic nature of its gameplay mechanics. While this remaster isn’t the cream of the crop, it’s definitely a contender. You’ve also got a long list of side activities to partake in such as Mayhem, Insurance Fraud and Professor Genki’s Reality Climax. The latter is a Japanese gameshow where you fight your way through a colourful warehouse filled with unusual traps, hostile mascots and other unwieldy threats for cash prizes. It’s even accompanied by an over-the-top commentary for those precious Takeshi’s Castle vibes.

Saints Row The Third Remastered is a decent upgrade of an open-world classic, although doesn’t soften all of its rough edges to properly take advantage of modern platforms. Visual and mechanical blemishes remain, and these aren’t helped by combat and exploration, which are also feeling their age in 2020.

All my complaints aside, I still had a lot of fun roaming the streets of Steelport punching pedestrians in the jewels (yes, there’s a dedicated button for that) and embarking on The Third’s delightfully wacky range of missions and activities, all of which reward you with new weapons and vehicles to wreak havoc with. If you’re a fan of the series or simply after a charming open-world experience, you can do much worse than this.