OK, that’s not quite fair. Just as Saints Row took the GTA III template and made a few wise improvements, so Saints Row takes the best bits from its predecessor and pushes them to the max. Sure, we get a slightly clichéd tale of the old gang leader returning to his city and working to get his gang back on top, but what made Saints Row so enjoyable wasn’t the story but the missions – and particularly the missions that had less to do with furthering the plot and more to do with just messing around.


Variety is the key word here. Bone-snapping insurance scams, hooker recruitment, assassinations, bare-knuckle fighting, destruction derbies and riding a flaming quad-bike through the local uni campus are just some of the activities on offer. One minute you can be spraying excrement on city property from a stolen sanitation truck, the next you could be protecting celebrities while throwing crazed fans through the furniture or committing staged police brutalities for a dodgy reality show. All credit to developers Volition: this might be lowest common denominator stuff, but it all hits the right South Park/Jackass spots. 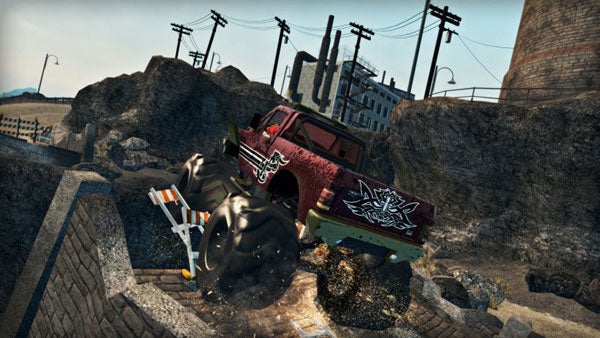 Meanwhile, the fundamental action seems a bit better staged this time around. Defeating rival gangs and acquiring territories is still the name of the game, but the central missions have a more logical sequence and there’s less time spent just mopping up gang members or looking for something (or someone) to do (in). Some of the missions are just fantastic. Like motorcycles? Like machine-guns? How about a high-speed chase that combines the two?

This is probably the most action-oriented open-world crime game we’ve seen – a fact the ridiculous prison-break opener makes clear. There’s no cover system or any hint of realism, but the third-person controls work well and a recharging health system means you always have a fighting chance of overcoming the odds (and often then some). The missions go large on gunfights and car chases, and the skilful use of the Havok physics engine means that things collapse, crash and go bang in exuberant style. If you’re the sort of guy who loves a game where you’re actually rewarded for shooting someone in the more painful dangly bits of their anatomy, then this is the sort of game you’ll love. A lot.

The rest of us might not always feel the same. The fact is that Saints Row 2 comes packed with flaws and shortcomings, some technical, some a matter of taste. On the first front, it still has to be said that the visuals are nothing to write home about, unless your mum wants to hear that ‘it doesn’t look all that great.’ With its flat architecture, dull lighting and limited character detail, Saints Row 2 could easily fit in with the first wave of 360 titles. The images on this page make it look better than it actually is. Even Mercenaries 2 – itself not a blinder – makes it seem sub-par. 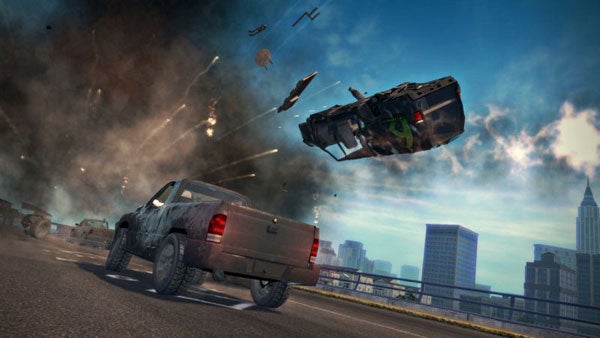 Sadly, much the same is true of the AI. We don’t expect the kind of enemy intelligence from an open-world game that we expect from, say, your average FPS, but the gangsters of Saints Row 2 are spectacularly thick. We’re talking ‘not moving when your buddy two feet away is shot dead’ thick. We’re talking ‘unable to follow you on a motorbike without crashing’ thick. We’re even talking ‘I can’t follow you because I’m stuck behind this parked car’ thick. At one point I was able to wipe out around thirty enemy gangsters single-handed through the well-known military strategy of running around like a nutter blasting then skulking around a corner to recuperate. I’m not sure they teach that one to the US Navy Seals.

But the thing that really holds back Saints Row 2 for me is that its city, Stillwater, never really feels like a real, coherent place. Instead, we get a bunch of generic neighbourhoods, sparsely populated with traffic, criminals, police and citizens, where hardly anything you do seems to have any real consequence. Remember the slightly guilty feeling you got when you ran someone over in GTA4’s Liberty City? Well, in Stillwater you can run down, whack or shoot who you like. You won’t care – it’s all played for laughs – and neither, it seems, will the police unless you make a real ruckus doing it. Saints Row 2 has the eccentric characters, the crass humour and the radio stations of its inspiration, but the wit isn’t witty and the characters lack real personality. The more you played GTA4 the more you connected with the city and its denizens. The more you play Saints Row 2 the more you wonder whether there’s really anything worth connecting with. 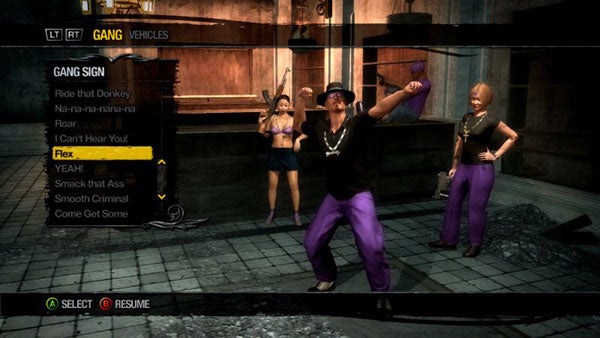 And this leads me to my next point – taste. I moaned a bit in my review of the original Saint’s Row that there was something adolescent and moronic in its humour, as if a whole game had been designed by Stifler from American Pie. Saints Row 2 takes things further by being downright nasty from time to time. I’m sure the early mission where you beat up vagrants is meant with a satirical tongue in cheek, but it still left me wondering whether this was all just harmless fun. Violence is treated with an incredibly casual attitude. Frankly, I’m not all that surprised that the NYPD has spoken out against the game. 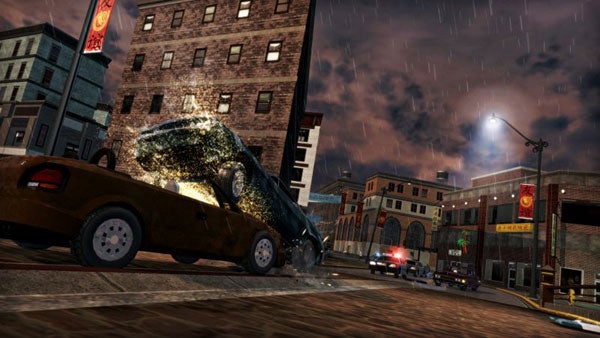 Some of you will find this offensive, some of you will think it nothing to worry about. I’m not going to get too caught up in it or go on for too long about the game’s technical shortcomings for one simple reason: whatever I think about these things, I have to admit that Saints Row 2 is pretty more-ish. While some of the ideas and execution are shockingly amateurish, there’s still something about it that makes you say ‘one more mission’ or ‘I wonder what happens if I do this.’ And while I don’t think it’s as out and out enjoyable as Mercenaries 2, it still provides many hours of good (if morally dubious) entertainment.


The level of customisation also helps. From clothes to cribs to vehicles to your own face, hair and tattoos, there are so many ways to stamp your own gangsta identity that it’s impossible not to get a little bit caught up. Finally, you should remember that all this fun is available multiplayer, with a two-player, drop-in, drop-out co-op mode that spans the whole single-player campaign. I’ve had limited experience of this, writing just one day before release, but from what I’ve seen it should be a hoot.

You’d have to be mad to buy Saint’s Row if you haven’t finished off GTA4, but if you have and you need another city to terrorise, then you will get your money’s worth from this. Not a great open world game by any means, but a good one? Despite my misgivings, yes indeed.


While no match for GTA4 on any level – and a mess in many technical terms – Saints Row 2 still knows how to party. Just be aware that there will be many better games in the next few months.