The poet TS Eliot once said that “talent imitates, but genius steals.” If Eliot’s words apply to games as much as they apply to literature or other arts, then there’s little doubt that Saints Row is one of the greatest works of genius that the medium has ever produced. Indeed, there’s a certain irony in the fact that a game that celebrates crime – Grand Theft Auto – has become the victim of one of the most blatant and impressive thefts of style, idea and game mechanics in gaming history. Saints Row is the Great Gianna Sisters of this generation, only without the stinking Nintendo lawsuit that kept that game off the shelves. I know Volition’s defence has been that Rockstar has created a genre and it’s only doing its best to expand it, but – really – just look at the cars, wander the streets, watch the cut-scenes and tune into the radio stations. Who are they trying to kid? 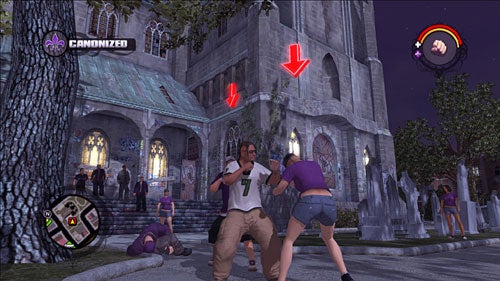 Of course, Saints Row comes out on a console without a GTA to call its own, and if it’s a vaguely cynical clone of GTA, at least it’s a good one. Unlike such horrors as The Godfather or True Crime it gets the basics right, creating a busy city packed with interesting missions and genuinely fun activities, with a working combat system and decent enemy AI. Say what you like about Volition, but of Rockstar’s wannabe rivals, only Pandemic – with Mercenaries and Destroy all Humans – has managed anywhere near the same thing. 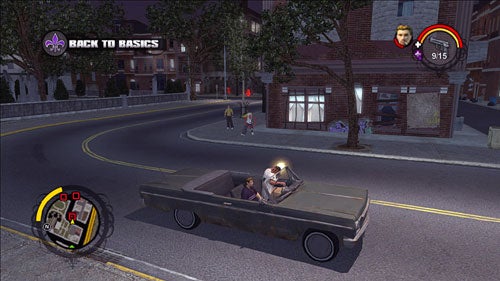 More impressively, there are concrete ways in which Saints Row actually improves upon its inspiration. For one thing, it has actually pulled in a functional navigation system, with a map that shows all the available shops, missions and safehouses, and a facility to set waypoints so that a route on the mini-map leads you there. I know those who spent months learning the Vice City knowledge are going to feel this cheapens the whole experience, but it certainly helps you find your feet in the first few hours. For another thing, Volition has made it quick, easy and relatively painless to restart missions when things go pear-shaped, and even added checkpoints to some of the longer efforts. And unlike GTA or The Godfather, hand-to-hand and armed combat both work really well, partly because Saints Row sticks to a sensible twin-stick move and aim system, and partly because weapons and ammo are relatively plentiful and pack a real punch. You go into this game not dreading every fire-fight, but actually relishing the opportunity to fill your enemies full of lead. Can you say the same about Vice City or San Andreas? 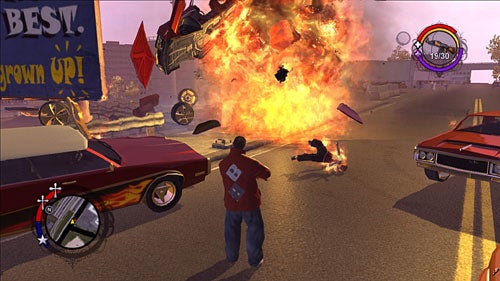 In fact, you’ll be even happier to throw a grenade at that enemy and blow them into bits, as Volition has also packed in the Havok physics engine. This not only ensures that vehicles slide around in a satisfying manner, but that cars, trucks and ambulances explode in a similar fashion; that carelessly struck pedestrians fly backwards with a cheerful crunch, and any objects clipped with a high-speed vehicle react as you’d pretty much expect. To see this at its best, you only need to take on one of the game’s many Mayhem or Insurance Fraud missions. The former are simple, joyous exercises in destruction, where every piece of public property wrecked means bigger points, and you can busy yourself chaining together combos of uprooted lampposts, tossed pedestrians and smoking vehicles. As for the latter, well, taking a dive in front of fast moving traffic in an attempt to get yourself thrown through the window of a late-breaking SUV has never been so much fun. 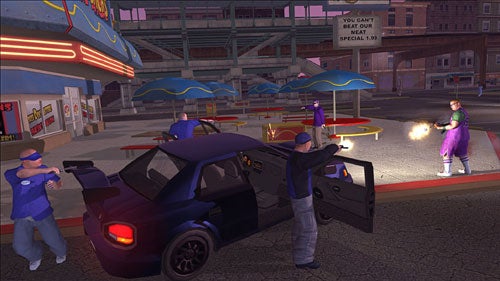 In fact, the one basic area where Saints Row doesn’t improve that much on GTA is in the one area that you thought it really should: the graphics. Yes, there are some nice lighting effects and plenty of lovely soft shadows, but the streets of Stilwater aren’t as intricately textured and beautifully modelled as you might hope, and neither are they as crowded as you might expect. It’s true that there’s a greater variety of characters walking the streets at any one time, but even these don’t seem whole generations ahead of what we’ve seen before. It’s attractive, and very clean looking in that 360, HD sort of way, but stunning? Probably not. And why all the horrible V-Sync tearing? Surely someone should have picked this up in QA. 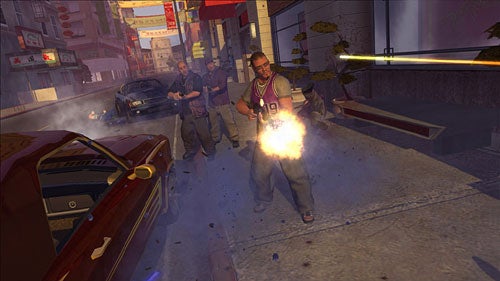 But let’s not be unduly harsh. It’s important to make clear that Saints Row is a thoroughly entertaining game. THQ has stayed alarmingly close to the GTA template, but it has also worked hard to make the game fit in with the whole ‘have it your way’ ethos that surrounds the Microsoft console. There’s a lot to like about the way you can create your own hero, then kit him out with new haircuts, tattoos and outfits as the game progresses, and even customise your stolen rides. Saints Row also makes a good fist of gang warfare, with territories to conquer, counter-attacks from rival gangs to defend against, and a real sense of how your gang’s reputation is being felt on the streets. And while I’ve hijacked rigs and outrun cop cars to the sounds of a cheesy eighties rock radio station before, I can’t deny that it’s still fun here. I find it hard to believe that anyone bar the most po-faced GTA-enthusiast could play Saints Row and not have a rolling good time. 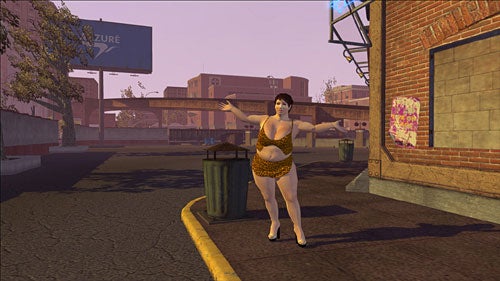 That is, provided that person is male. I wouldn’t usually moan on about this, but Saints Row has one of the most cringingly adolescent approaches to women and sex I’ve come across (now, stop it) in some time. I haven’t seen so many no good hos since I was last in the garden shed, and if the girls aren’t pimping their behinds, they’re busy trying to put a ‘cap’ in yours while wearing ridiculously skimpy clothing. Worse, the game seems more obsessed with double entendres than anything I’ve seen since the golden days of Finbarr Saunders. Some are funny, but a lot get awfully tired after a while, and by the time the Freckle Bitch burger bar advert has appeared for the umpteenth time, complete with groaning sign off about how your hostess would like you to enter her back door after midnight, you start thinking ‘these guys really should get out more.’ 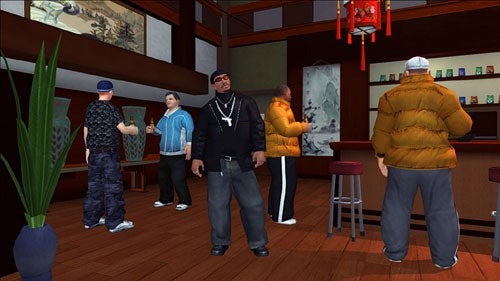 And while this sounds like a trivial issue, it’s actually part of the thing that prevents Saints Row from being not just a good game, but one of the great, utterly absorbing, cultural landmark games that Vice City and San Andreas are. Saints Row brandishes its gangsta attitude and schoolboy humour like a sledgehammer, not realising that it’s GTA’s barbed wit and affection for worn clichés and silly period details that makes those games so great. Stilwater is a big, bustling city, but it’s not anywhere near as neatly tied into its cinematic or TV reference points as Vice City or Los Santos. In fact, you get the feeling that it’s not riffing on Florida, Miami Vice and Scarface, or on Vegas, Menace 2 Society and Tupac, but on GTA in general and Liberty City in particular. What’s more, Stilwater certainly can’t match San Andreas state for sheer size or silly things to do. 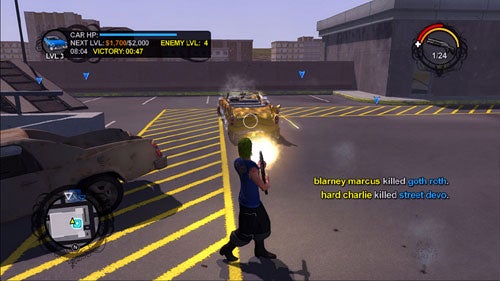 Sadly, the much-heralded multiplayer action is a little anti-climactic too. Instead of online gang warfare, we just get a fairly lacklustre set of deathmatch-style arenas with dull environments and – at the time of writing – noticeable lag. I’d be surprised if this stayed a Live! favourite for long.


So, when it all comes down to it, Saints Row is solid, fun and – for the most part – beautifully constructed, but rather devoid of inspiration. Again, don’t get me wrong. I’ve enjoyed Saints Row. I’ve chuckled at the game’s explosive mayhem, and even laughed at some of the cheap gags dished out while I’ve driven prostitutes and wealthy johns around in the back of my limo. Yet never once have I grinned that idiot grin like I did when I first went on a Vice City crime spree to the sound of Michael Jackson’s Beat It, or raced for a motorbike with the law in hot pursuit. It’s good enough to play Prince Regent while we’re waiting for GTA to take its 360 throne, but once the king returns, I doubt that Saints Row will be remembered with all that much enthusiasm. 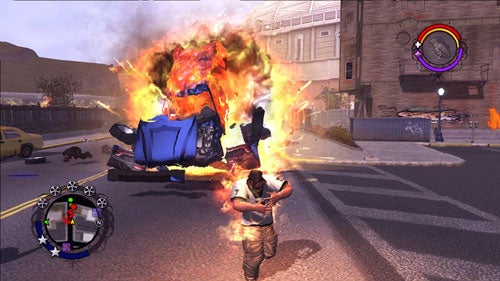 
The best GTA clone out there, improving on Rockstar’s classics in some key respects. However, it hasn’t got the wit, scope or invention to be anything more than an enjoyable substitute while we wait for the real thing to return.