There are two commercial ways of printing high-quality photographs directly from your digital cameras. You can spray tiny drops of coloured ink at the paper, as inkjets do, or you can heat tiny dots of wax until they transfer from a coated sheet, as dye sublimation does. The PrintEasy 110 is Sagem’s take on dye sublimation and claims to offer high print quality at low cost.


Although small, the PrintEasy 110 is a chunky little unit, coloured in cream and chalky blue, with a round, green button on top, three sockets on the side and a flap which folds down from the front to take the paper cartridge. This cartridge can be filled with up to 25 sheets of glossy photo paper, designed as postcards with small perforated strips at either end, which can be torn off once the print is complete.


A release lever on the right-hand side enables you to hinge the top cover up and reveal the two dye film rolls, typical of this type of dye sublimation printer. We’ve previously looked at similar machines from Canon and Samsung, but at £70, the PrintEasy is substantially cheaper than either. The Samsung machine is close to £200. 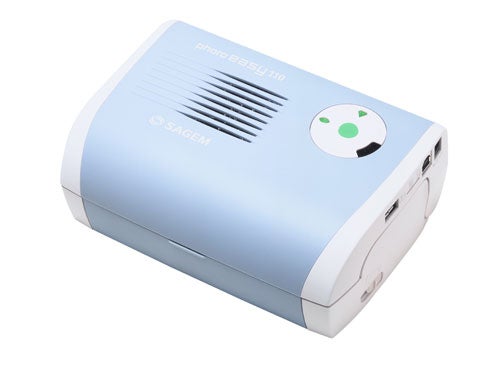 To install the two dye-sub film rollers, you lift the top cover and clip them into holders front and back. This is quite a delicate process and it would be easier if the printer used a self-contained cartridge, like others of its type. You only need to do this once every 75 prints, though, so it’s not too taxing.


Paper feeds from a cartridge which slides in at the front, effectively doubling the footprint of the printer, and makes four passes through the machine, as it picks up yellow, magenta and cyan dye and finally a transparent covering layer which protects the image.


At the side is a low voltage input for the black block power supply, a USB 2.0 port for connecting the printer to a PC and a PictBridge socket for linking it to a camera. This socket also doubles as a connection for Bluetooth or Wi-Fi cards – both are available as options.


The PC software supplied with the printer, known as Companion Print, includes the necessary printer driver and is a very simple affair, enabling the print of images up to 15 x 10cm, borderless.


Sagem claims that you can get a print out of this machine in 60 seconds. We couldn’t match this time, either printing from a PC or direct from a PictBridge camera, but at 68 seconds for the former and 66 seconds for the latter, it wasn’t far off. It’s certainly a lot quicker than an equivalent ink-jet print.

Image quality is really excellent. Well-balanced colours and pin-sharp definition are the order of the day and because of the dye sublimation print technology, there are no visible dots, so they really look like photographic prints.


Sagem includes a feature called Crystal Image, which slows printing slightly, but nowhere in the documentation or publicity does it suggest what Crystal Image is supposed to do. From its name, we assume it improves the image quality and comparing identical prints with and without Crystal Image switched on, there is a slight sharpening apparent in the Crystal Image print. 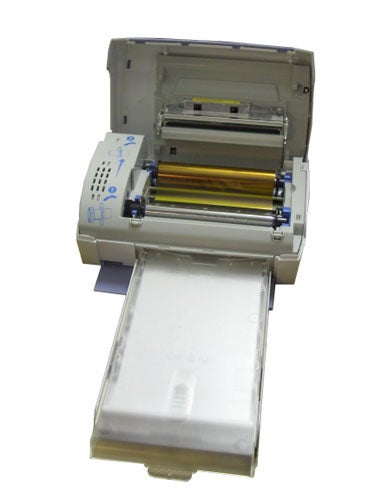 The only thing that can mar the print quality from the PrintEasy 110 is any dust on the print blanks in the paper cartridge. Dust specks immediately show up as white dots on the finished print, so it’s essential to keep the paper blanks under cover or in the cartridge at all times.


For its size, this is quite a noisy printer. We measured it at 63dBA while printing and most of this noise comes from feeding the print back and forth through the printer. This puts it in quite a noticeable frequency spectrum, so it’s not a printer to leave running when you’re trying to concentrate.


Sagem sells two printing packs, one good for 75 prints and costing £25, but the other something of a bargain at £30, as it can produce 150 prints. This is the one we used for calculating running costs and as you can see, it comes out at 20p per print. This is a very good price per print, particularly for ones of such high quality. When you combine it with the low purchase price of the printer, it gives a very attractive total cost of ownership.


Sagem’s EasyPrint 110 is truly idiot-proof to use, and it would be hard to think that anyone could produce poor prints from the printer, unless they were a lousy photographer. It’s not often we award a printer 10/10, but when you look at the print quality of this little machine and couple it with the low print cost and low asking price, there’s no avoiding that conclusion.