If you were asked to name five mobile phone manufacturers, I bet Sagem would not be among your list. The company doesn’t have the sheer presence of many others, and it can easily slip under the radar. But for all that, Sagem’s mobiles are often pretty good.


The last one I looked at was the 3G enabled My600v. I found that to be a neatly designed and efficient handset. Not at the leading edge, but certainly at an attractive price. 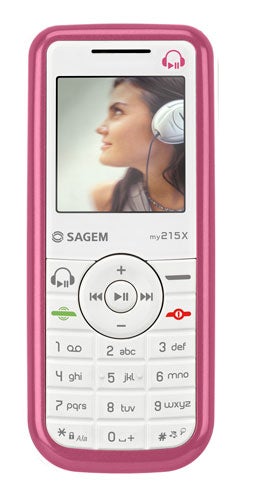 The My215x is another low cost handset from Sagem – just £19.99 on Vodafone Pay-as-You-Go which makes it a bargain. At that price you shouldn’t expect a huge array of built in features. There is no camera, for example, which immediately puts it out of the reckoning for anyone even remotely interested in taking snaps with their mobile or MMSing other people.


Pink is everywhere at the moment, and here it is again. The My215x has pink trim around the brilliant white front fascia and the entire back fascia is also pink. That is the only colour combination available in the UK. So if you don’t like pink, look away. Also this is a dual-band handset without GPRS, or a web or WAP browser and it doesn’t have Bluetooth.


In its favour, this is an extremely light and pocketable phone. At 69g and 103mm tall, 44.5mm wide and 15mm thick, the My215x rates as one of the smallest, thinnest and lightest candybar handsets. OK, it is not as thin as, say, the Samsung SGH-U600, or Sony Ericsson’s emaciated W880i but then those mobiles trade on their thin format in a big way, which the My215x does not.

As well as the appealing size of this handset I rather like the button design. The number keys are large and so easy to hit. They aren’t individual keys but rather a single pad, which also includes the two softmenu keys and the Call and End keys. This is made of a rubbery substance, which is pretty tactile and while you don’t get the satisfying return that you do with individual keys when you hit them there is a slight click and you can feel the ‘keys’ depressing.


The sides of the phone are completely devoid of buttons and controllers. You do everything you need to by prodding at buttons on the front fascia. I have to admit I found this rather refreshing. The sides have a recess built into them, which adds a little to the overall look and feel.


As well as being pink, the My215x fascia is made of plastic. It feels reasonably solid but it may well get a bit knocked about during use. At a price of £20 though, if this mobile lasts you a year and you then replace it with another model, it will have done good service.


The screen is a big disappointment, but then remembering the price of this phone that should not come as a surprise. It is a 65,000 colour CSTN with 128 x 128 pixels in an area measuring just 1.6 inches corner to corner. Given those dimensions I’m rather glad, that there is, as already noted, no web browser!

Sagem is pushing the My215x as a combination phone and music player. It supports MP3, AAC and WAV files. It has 256MB of built in memory, and it functions as a USB mass storage device. That means you access the memory simply by plugging the provided mini USB cable into the phone and your PC.


The mini USB slot doubles as a charge slot and the phone’s battery will charge while connected to your PC. With the phone and PC connected you can drag tunes from your PC into the My Sounds folder in the phones memory. Music files can’t be inside folders nested within My Sounds. I found this pretty annoying as it prevents you from just pasting the entire folders of your music library.


When you are charging the phone with its own charger music playback continues. However when I switched to using a mains power adaptor I use with a lot of devices the phone decided I was trying to put it into mass storage mode and so refused to playback my tunes.


That 256MB of memory is all you get. There is no expansion slot. 256MB is a paltry sum if you want to carry a good array of tunes around, though if all you are interested in is your favourite few songs it will suffice. 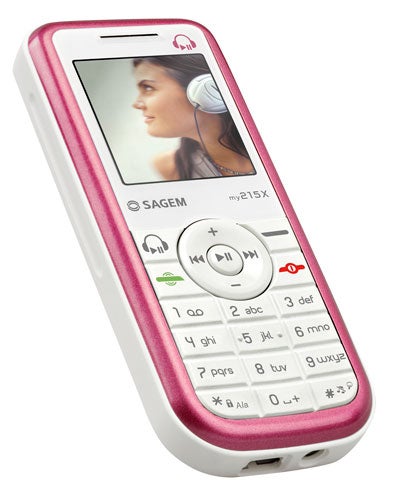 Sagem has put its music control buttons onto the navigation pad enabling you to control volume, start and stop playback and move backwards and forwards between tracks. You can’t scan within tracks though. The left softkey button offers quick access to the music player too.


Listen through headphones was a surprisingly positive experience. There is no equaliser but the sound quality is pretty good, stereo effects are fine, and volume is OK too. If I found in-ear buds comfortable I’d have no problem using this phone for music listening. This matters a lot as the jack is a 2.5mm type so you are stuck with what Sagem provides unless you want to use a converter to 3.5mm. With the jack on the bottom edge of the handset using an adaptor could be a bit awkward.


I like that tapping the right softmenu button and then the bottom of the navigation button cycles you through options like reading text messages and calling voicemail, because this saves you from having to go to the full handset menu for these tasks.


Other applications on the handset include calendar, to do manager, a single alarm, voice recorder (embedded within the music player), timer, calculator with embedded converter for money and a couple of games – a Sudoku clone and a puzzle in which you need to rearrange the jumbled bits of a picture.


Battery life is quoted by Sagem as three hours, 50 minutes of call time, 255 hours on standby. I got the phone to play music non-stop and it gave me just short of seven and a half hours of music.


The Sagem My215x turns out surprisingly good quality music, and while the player has some drawbacks that will annoy hardcore music fans it offers enough for the occasional listener. Inevitably for the price, the phone is very short on other features, but then that price is very attractive.