We’ve already seen in reviews of Sagem’s HD-D45 and Samsung’s SP50L7HXX just how impressive DLP TVs can be when it comes to delivering sheer screen size for your buck. But even those TVs have scarcely prepared us for the almost preposterously attractive proposition offered by Sagem’s HD-D56B. For this TV megalith somehow gives you 56in – yes, that’s 56in – of pictures for just £1,800. Wow. This just has to be too good to be true – doesn’t it?


As you take in the scale of the D56B, you obviously have to accept immediately that it’s not flat like a plasma or LCD TV. But having to accommodate the set’s 600mm rear end is arguably a relatively small price to pay when you think that a plasma TV of a similar size would cost you at least two to three times as much. 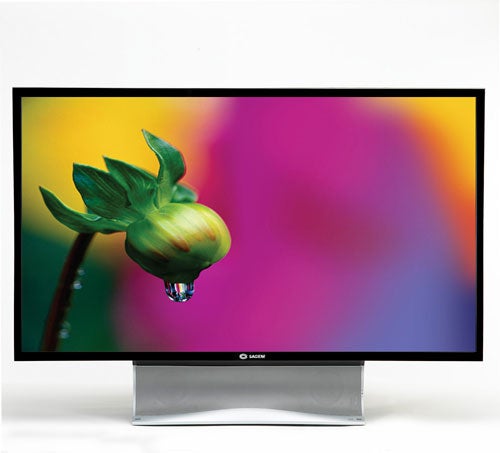 And anyway, aside from its butt the D56B does a very good job of making itself look quite small for such a mighty screen. The screen surround is exceptionally slender (as well as being quite glam in its high gloss black finish), and the speaker-bearing subsection is both reasonably diminutive and effortlessly elegant with its silver finish and graceful inward curve.


The D56B’s connections provide the HD Ready standards of a DVI socket and component video inputs. In an ideal world we might have preferred to see an HDMI socket for digital HD duties given DVI’s lack of audio-carrying capability. But it’s not as if it’s hard to get round the DVI audio problems – and some might even argue that DVI sockets are more stable as connectors than their HDMI counterparts.


Elsewhere the connection highlights include a PC input, three SCARTs, and a coaxial digital audio input/output system. Usually this latter jack would point towards the D56B having a built-in digital tuner, but here it’s there to correct potential problems with audio lag, where delays caused by picture processing in digital technology TVs can cause images to appear out of synchronisation with their accompanying sound. Loop your audio through the D56B’s digital jacks, and it will correct any potential synchronisation issues.

As we hinted in the previous paragraph, the D56B sadly does not include among its features a built-in digital tuner. But perhaps you could use the money you’ve saved on getting such a huge screen so cheaply on a Sky HD receiver?


Elsewhere, we’re pleased to say, the D56B does little to live down to its price tag. The DLP chipset at its heart, for instance, is a Texas Instruments’ HD+ affair, offering a very respectable 3000:1 contrast ratio and HD Ready resolution of 1,280 x 720. The set also employs Faroudja DCDi scaling to reduce jagged edges and make the picture smoother, and offers an ECO mode that reduces the output of the TV’s projector bulb to increase its lifespan and, with a bit of luck, improve black levels. Finally, there’s a handy set of twin-tuner picture in picture facilities so you can watch two tuner events or one tuner programme and one AV input simultaneously. 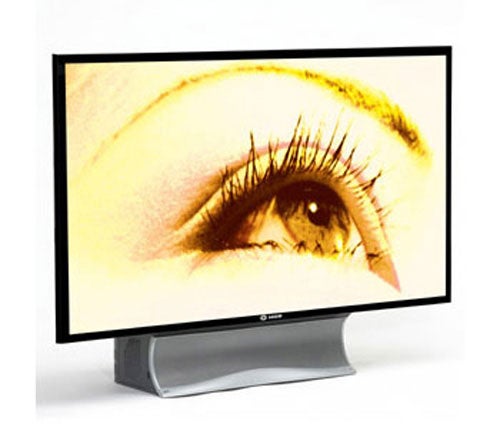 Although the smaller Sagem DLP TV we looked at a couple of weeks ago proved that the French company certainly knows its DLP onions, we frankly doubted that the same sort of quality could be maintained on a screen as big and affordable as the D56B. But we’re happy to say we were wrong.


The lack of video noise visible in the picture is particularly amazing. HD and progressive scan pictures look more or less completely immaculate, with no grain, dot crawl, motion noise or edge shimmer at all. More surprisingly, even fairly low-rent sources like a Sky One standard definition broadcast look smooth and polished. And remember, we’re talking here about a standard definition picture that the TV is stretching to fill a mammoth 56in screen – way bigger than the standard definition format was ever supposed to go.


While we’re on the subject of noise, it’s a relief too to discover that digital feeds via the set’s DVI socket are largely free of the blocking artefacts witnessed with similar feeds on some rival HD Ready TVs.

Next to impress is the D56B’s colour tone, as the set combines eye-catching vibrancy with outstandingly natural tones during practically all scenes be they bright or dark. The tones also stay natural with all sources, be they standard or high definition. This all makes a refreshing change from the slightly weird colour tones experienced with some of our test scenes on many of the D56B’s flat panel rivals.


If rear projection TVs tend to have a fault, it’s that they’re not very bright. But the D56B is having none of that, pumping its picture out with plenty of vim – especially if you’re not using the Eco mode.


We’re not necessarily saying that you shouldn’t use the Eco mode, though, as you may like what it does with the TV’s black levels: that is, take them from very good all the way to excellent. Rare indeed are flat TVs that can make dark scenes look as, well, dark as the D56B. The blackness doesn’t seem forced either, as black parts of the picture still contain enough subtle details to give them a sense of depth. 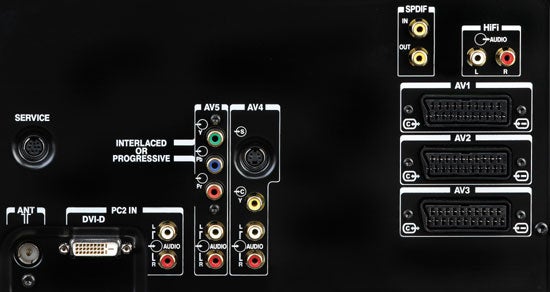 Rear projection TVs are often considered to fall slightly short when it comes to sharpness. But again the D56B confounds this argument by looking every bit as detailed and clear with high definition as a good plasma TV.


Even the mighty D56B, though, can’t completely escape a couple of DLP technology’s traditional problems. First, during horizontal camera pans you can sometimes see fizzing noise over certain colour tones – especially people’s skin. Also, you can sometimes detect momentary flashes of colour striping over bright parts of the picture – a DLP phenomenon known as the rainbow effect. But aside from this not really terribly annoying duo, everything is sweet.


Even the D56B’s sound is pretty tasty – provided you’re careful how you set it up. Avoid the Dynamic Bass or Loudness options, and you’ll enjoy a soundstage rich with bass rumbles and treble details, complete with smooth, clear speech handling.


The D56B is another DLP triumph for Sagem, and once again opens the door to a world of truly giant home cinema pictures for people who probably thought they’d never be able to afford them.