What is the Sage Boss To Go?

While most smoothie blenders have been content to mimic the market leader, the Boss To Go is an innovator, resolving design niggles and boasting greater power.

Smooth-edged cups that are ready to drink from without having to screw on rims, a mighty 1,000W motor that makes drinks with particles up to 42% finer (putting an end to bits of spinach in your teeth) and dishwasher-safe blades all make blending a much smoother experience.

For going out and about, flip-top lids that screw in securely in one quick twisting motion mean there’s no need to worry about spills or leaks. An in-depth guide and recipe booklet accompanies the blender, with plenty of ideas for tempting smoothies, mocktails, breakfast bowls and nut milks.

If the Boss To Go’s design had to be summed up in a word, it would be “robust”. The durability starts at the base, which is made from die-cast metal. This adds to the weight of the machine but also its sturdiness on the worktop.

While comparable blenders rely on rubber and plastic connections between base and blades, the Boss To Go’s blades come sealed into a single unit that locks into the base with a heavy-duty metal coupling. The serrated Kinetix blades themselves are contoured to create rapid circulation, with a scooped stainless-steel bowl beneath. 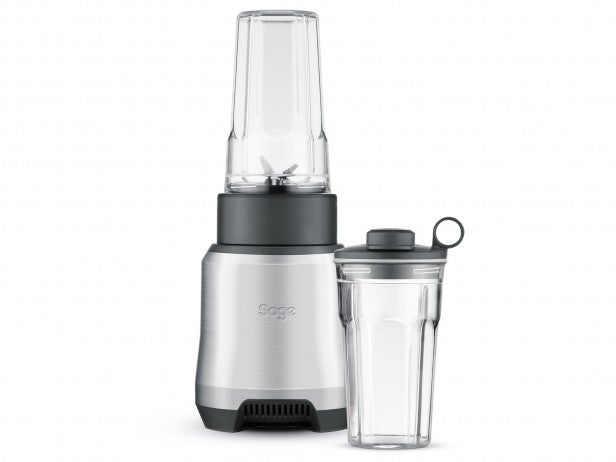 The Boss To Go’s two cups are just as tough. Made from wear- and impact-resistant Tritan, each comes with a smooth edge from which you can drink directly, no sharp external threads, and lids that lock in to ridges inside.

Each cup has a capacity of 500ml, which is a little less than similar blenders. To blend, the inverted cup and blade unit simply drops onto the base (with no need to push down) and twists in place – either in one position for a constant blitz or intermittently to pulse.

Sage Boss To Go – What is it like to use?

What’s most refreshing about the Boss To Go is the easy assembly. Both the blades and lids screw into the cups with a simple quarter-turn, making it super-fast to attach and detach them.

We started by making a broccoli and kale-based fruit smoothie with whole linseed and almond milk. Blending for around 45 seconds, the vortex took longer than equivalent models to reach the greens at the top of the cup, but once it did, the ingredients were thoroughly ground. The final drink was silky-smooth, with no flecks of green veg, no bitter notes, and only one or two linseeds left unblended.

Next, we tried a recipe from the booklet: a Breakfast Thick Shake using almond milk, a frozen banana, yogurt, dates, oats, chia seeds and honey. This required a 60-second blend (the maximum time recommended for blending).

After running for about 30 seconds, most of the larger pieces of the mixture had disappeared; after 60 seconds, the drink was smooth with a creamy, thick consistency and sweet taste. Some flecks of dates could be seen but they weren’t noticeable when drinking.

Moving onto a Citrus & Cranberry Refresher mocktail to see how the blades would cope with ice, we added an orange, quarter of a grapefruit, cranberry juice, ice and agave.

The ingredients were clear before blending, but the blitzing motion was so rapid over 45 seconds that it caused the mixture to turn a foamy pink. It began to clarify a minute or two after. The mocktail had no traces of fruit skin – but did have a moreish, thick consistency.

We finished by making a milk using cooled, cooked quinoa and water. Blending for 60 seconds, the quinoa and water began to emulsify, finally turning a recognisable milky colour. A few traces of fibre remained. After straining through muslin, the milk was indistinguishable from shop-bought non-dairy milks and didn’t separate over the next few days in the fridge.

All the parts of the Boss To Go are dishwasher-safe, so clean-up is hassle-free. Even washing by hand takes mere seconds, since the parts don’t have any awkward nooks in which food can hide.

Should I buy the Sage Boss To Go?

If you’re looking for flawless performance, excellent versatility and unparalleled convenience in a smoothie blender, then the Boss To Go is for you.

As well as producing the smoothest smoothies you can make at home, the ability to make good-quality nut milks is a great way to save on specialist milks for those intolerant to dairy.

The only are of improvement could be the addition of a grinding blade to tackle the Protein Booster section in the recipe book (the Grind & Mill accessory is sold separately). Beyond that, however, it’s a pretty perfect package.

Nutri who? The Boss To Go is more of an investment buy, but it’s also the best smoothie blender we’ve tested.