The Sage Super Q proves its worth by offering a wide range of functions that could see you replace other household appliances, such as food processors, juicers and mixers to a degree. While its price is hefty, you’re paying for the convenience of having a timer and pre-set programmes, as well as two different jugs: one large and a smaller “bullet” cup, which can be fitted with a lid.

The Sage Super Q is a high-end blender. While it comes at a hefty price, it offers up everything you could ever want in a blender and more, taking on the functions of juicers, mixers and food processors. In addition to silky smoothies and pulverised ice, this blender is able to crush biscuits and create warm soup, as well as deliver nut butters, chopped veg and whipped cream.

Sage Super Q Blender – What you need to know

Sage Super Q Blender design and features – Heavy and large, but it’s easy to assemble and comes with a jug and a cup

This blender’s stainless steel main unit is quite hefty, so it’s best to leave it somewhere from where won’t need to move it. The transparent square-ish plastic jug has highly visible litre and metric cup measurements on one side, in 0.2l and one-cup increments. The transparent plastic lid can be a little fiddly to clip in place, but it comes with a large rubber seal to make the blender as airtight as possible.

The lid also has a measuring cup in it with 30ml and 60ml, and 1oz and 2oz measurements. The measuring cup has a rubber rim, allowing for easy removal to add smaller ingredients to the jug without the need to remove the main lid. You get everything you need with this blender, including a lid that contains a measuring cup

A rubber spatula and a plastic tamper are helpful when ingredients become stuck on the walls of the jug. Additionally, you get a smaller cup housing a separate blade unit on a rubberised plastic base with an airtight travel lid, reminiscent of bullet blenders, and ideal for a smoothie on the go.

Round the front of the main unit, you’ll find the on/off and pause/cancel buttons on the left and the speed dial on the right. Next to these, there are the cleaning and timer buttons. In the centre, an LCD will light up when the blender is switched on to display how much blending time has expired, or – in the case of the programmes – how much blending time you have left. 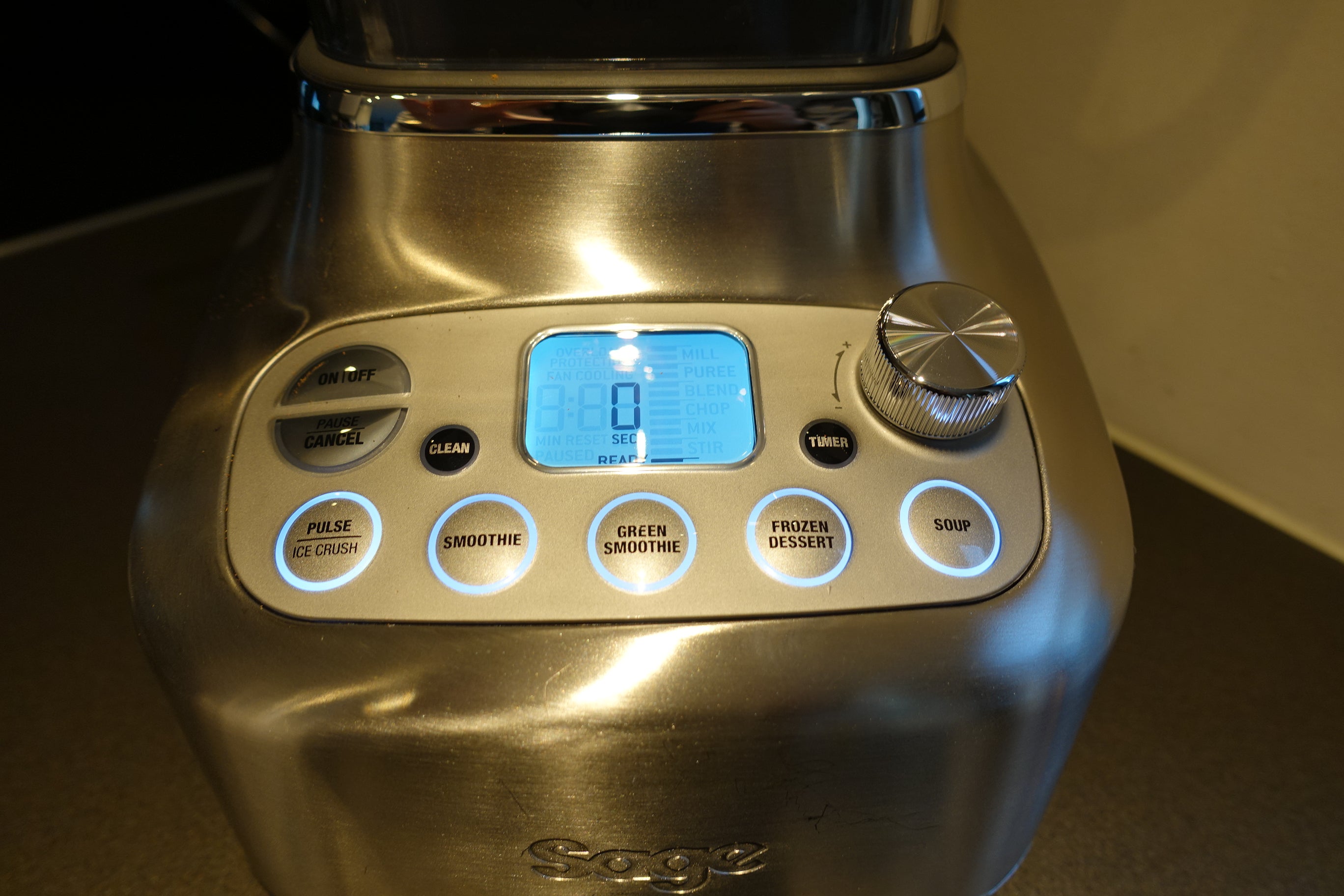 The speed settings are two levels each of “stir”, “mix”, “chop”, “blend”, “puree” and “mill”. You can see your progress between these settings on the LCD as you turn the speed dial. The manual is comprehensive and includes a blending chart for the jug, recommending quantities, speeds and times for various foods.

This blender has a pre-set cleaning programme, which is essentially 1 minute of high speeds and pulsing. To make the most of it, the manual recommends filling the jug with warm water and adding a bit of detergent for stubborn mixtures.

This programme was particularly useful when removing the stickiest remnants of nut butter from the blades of the large jug, since these can’t be removed from the jug for cleaning purposes.

Everything but the main unit can be put in the dishwasher. But while the jug can go on the bottom rack, the manual says to wash everything else on the top rack only.

I set the Sage Super Q various challenges, which it met beautifully. In addition to my standard tests, I also managed to use it for some food processor and mixer tasks.

First, I blitzed a quartered and cored apple, chia seeds, a pitted date, large chunks of a carrot, a peeled and halved orange, two handfuls of spinach and one banana with coconut water, using the Green Smoothie setting.

The duration of the programme was 50 seconds, but most of the blending was done in the first 30 seconds; the rest of the time was designated slow-down before the blender comes to a halt. This aims to avoid air bubbles in the smoothie, and it works. It came out consistently smooth. 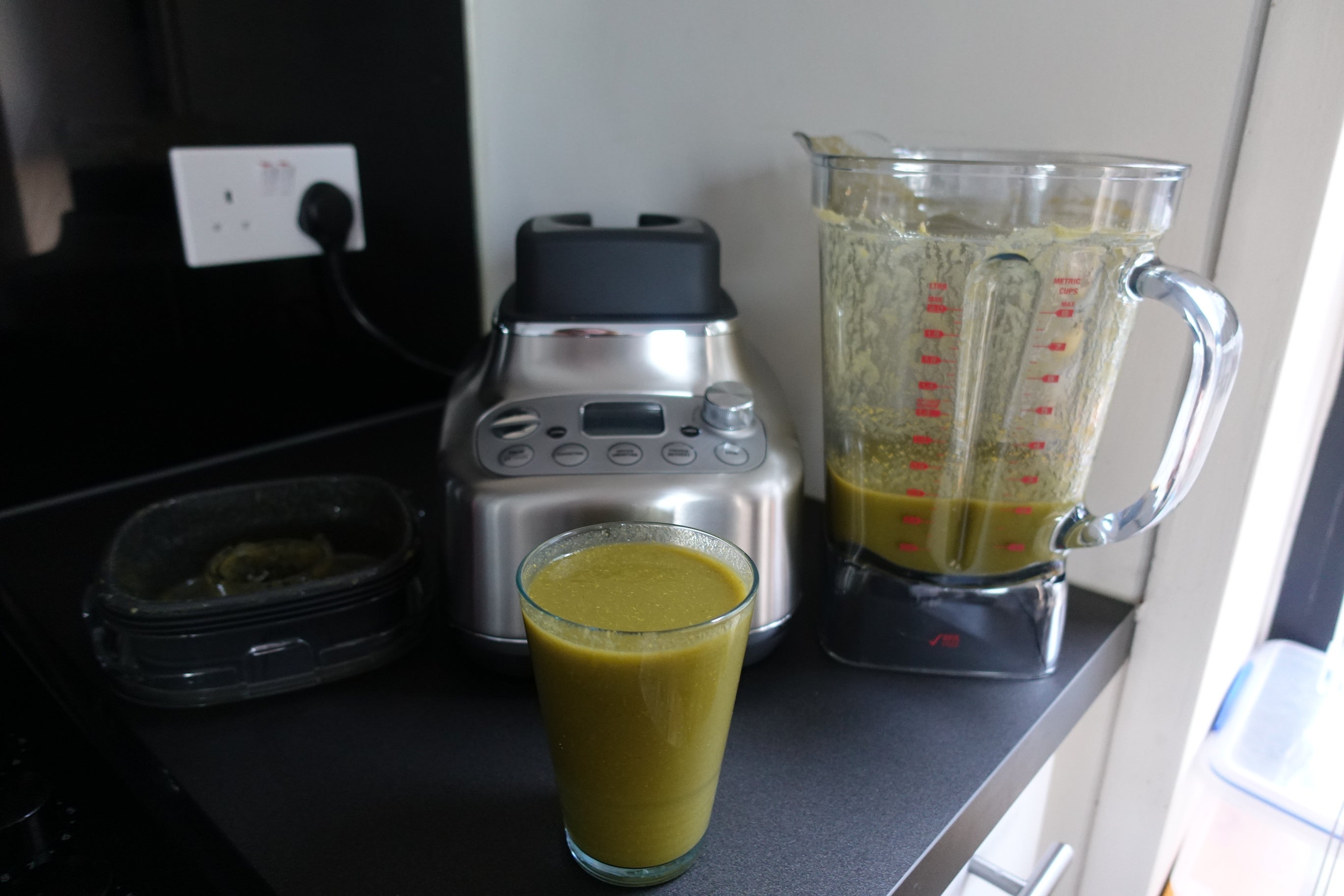 Our smoothie came out perfectly smooth

Next, I tried using the regular Smoothie programme with the smaller cup, adding frozen cherries, coconut water, a handful of spinach and a banana. On this occasion, it took 30 seconds, with the blender starting to pulse after the first 10 seconds. The mixture was a little foamier as a result. However, it was done quickly. I also noticed the appliance move around slightly on the worktop during blending – likely because the cup is very light and the main unit’s rubberised feet aren’t very grippy. 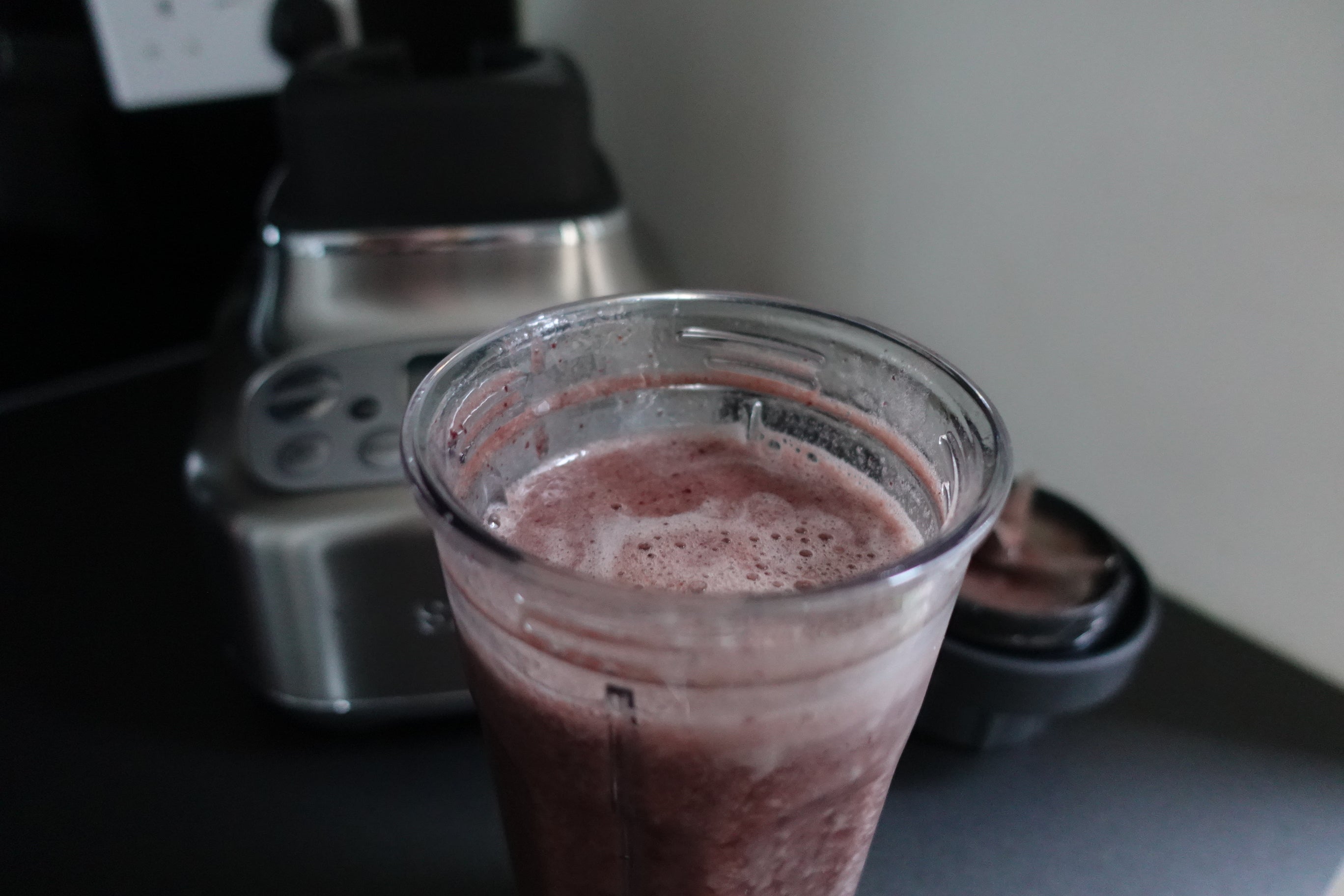 However, this wasn’t significant enough movement to be a concern, particularly since the blending times are very short using this cup. The manual advises that, as a safety feature, the blender will automatically turn off after 30 seconds when using the small cup and choosing a speed manually.

Using the same small cup to make a frozen margarita, I pulsed five large ice cubes for 20 seconds with the Pulse/Ice Crush programme. I then paused it (the default time being 50 seconds), added tequila, lime juice and syrup, and pulsed for a further 20 seconds. The resulting beverage had a great texture, piling up nicely, while still being smooth enough to drink through a straw. 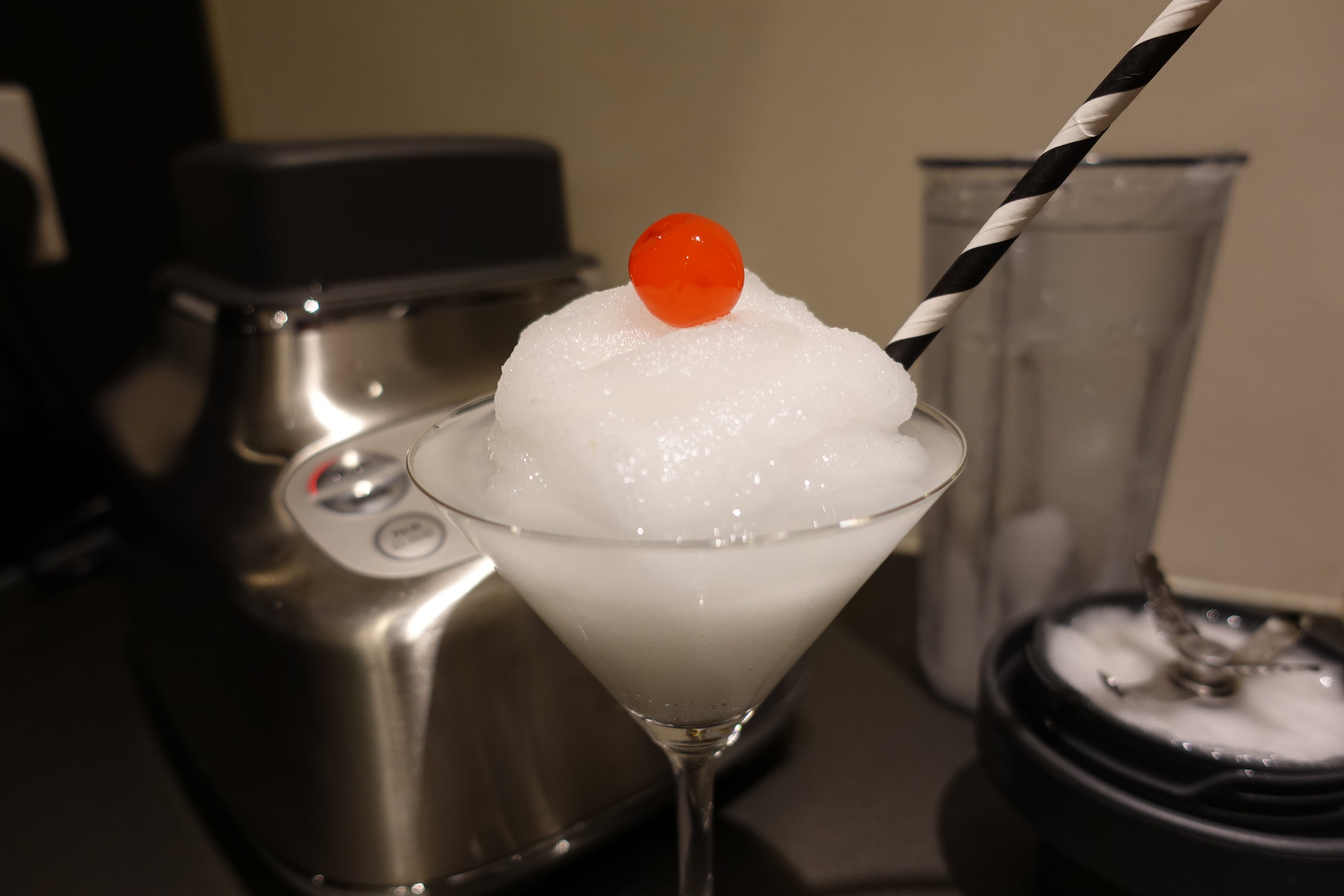 Our Margherita was super-smooth

In the large jug, I pulverised six large ice cubes in 20 seconds. After adding frozen pineapple cubes, syrup and a bit of water, I continued blending for a further minute, first with pulse and then switching to a manual blend speed after the programme finished. The resulting dessert had a nice texture. 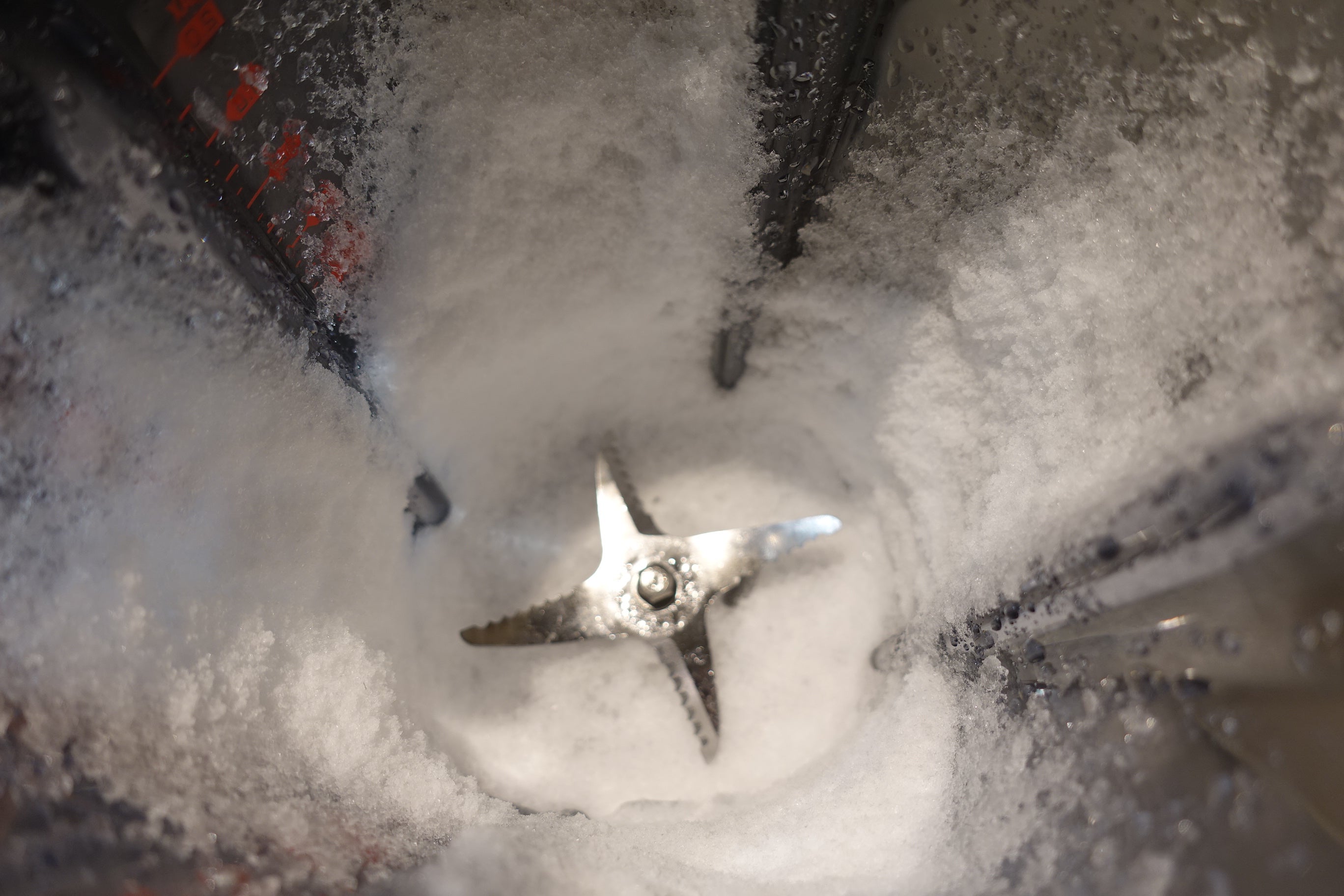 Ice cubes are no problem for this blender

For the Soup programme, I blended sliced courgettes, leeks and several handfuls of spinach with 450ml of cooled veg stock. (The stock had to be cooled because the soup programme heats the ingredients while blending. If you’d like to blend warm ingredients, it’s best to opt for a manual speed.)

The duration of this programme was 5mins 35secs; I paused it several times to add more spinach. In the last 15 seconds, the blender started slowing down, again to avoid the creation of air bubbles. 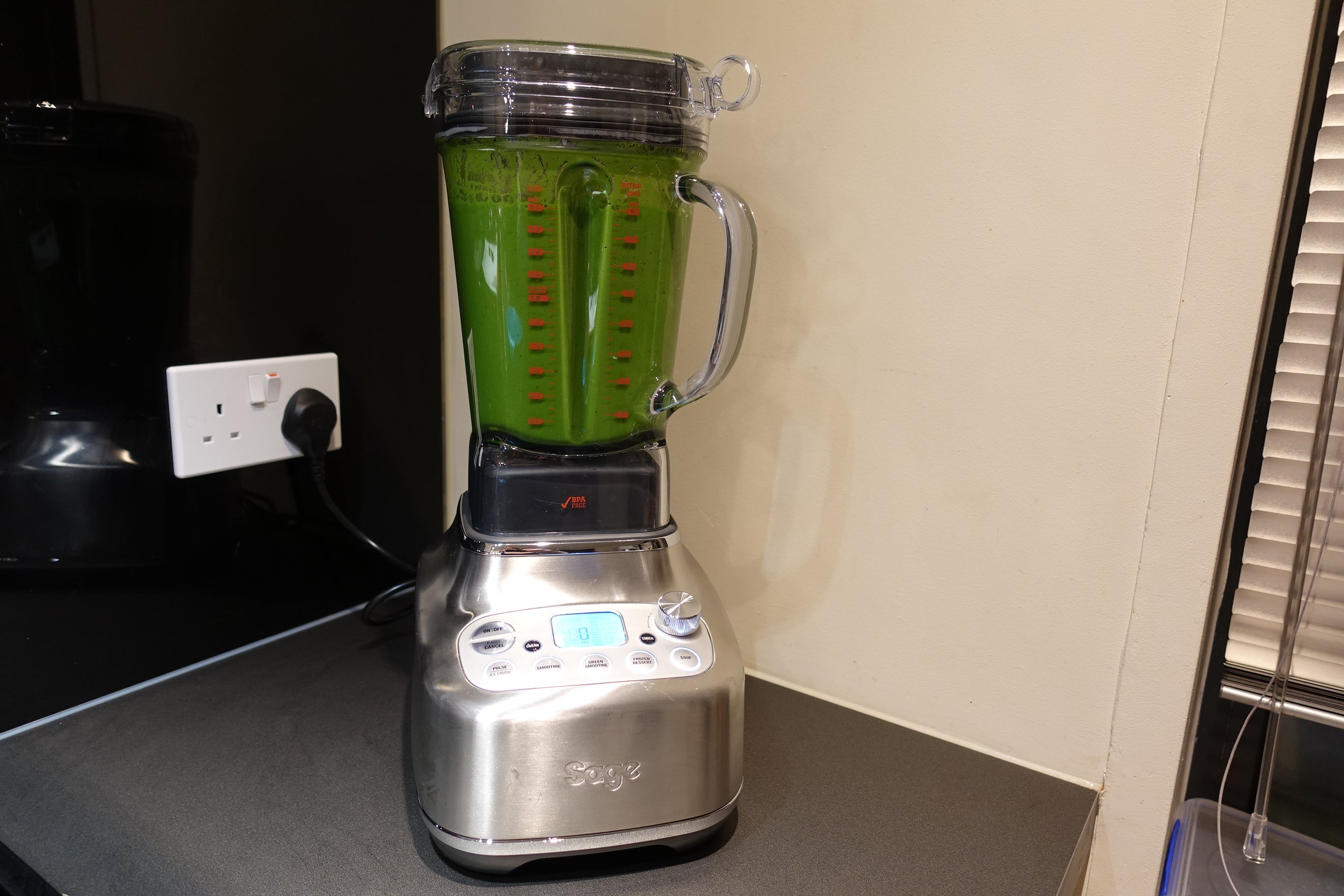 Soup can be cooked as it’s blended

The soup was heated to 68°C, which is perfect for a vegetable soup. However, if you’re looking to add meat, fish or other ingredients that need to be heated to a certain temperature, you should ensure to cook them beforehand.

To test some of the additional benefits of this blender, I pulsed chocolate biscuits for a cheesecake base, stopping after just 20 seconds as they were entirely pulverised. 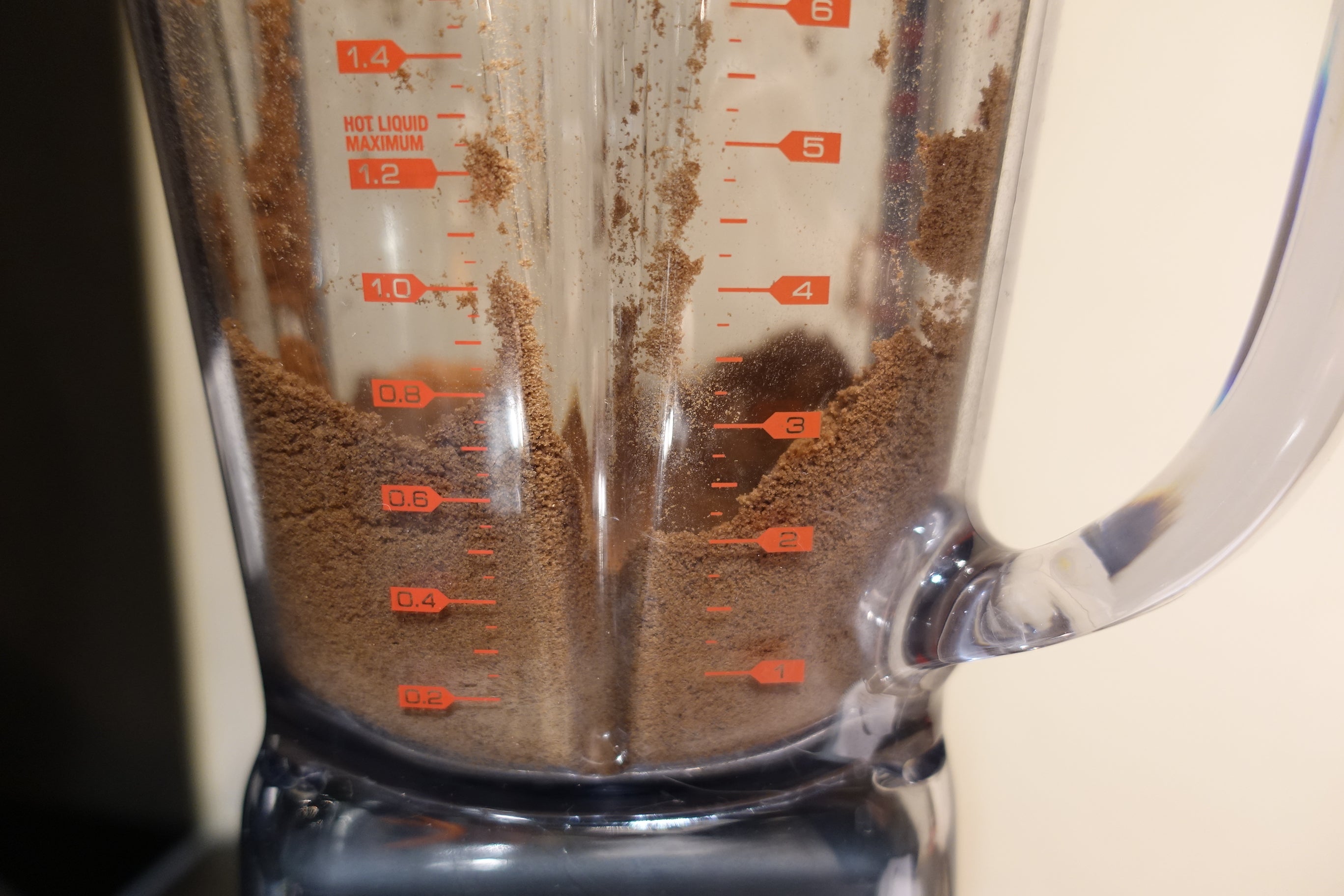 Our cheesecake base was just about perfect

Quartered onions were roughly chopped in about 6 seconds, increasing the speed from zero to the top level of the “chop” speed. This was just as well, because the blender sounded like it wouldn’t go much further. 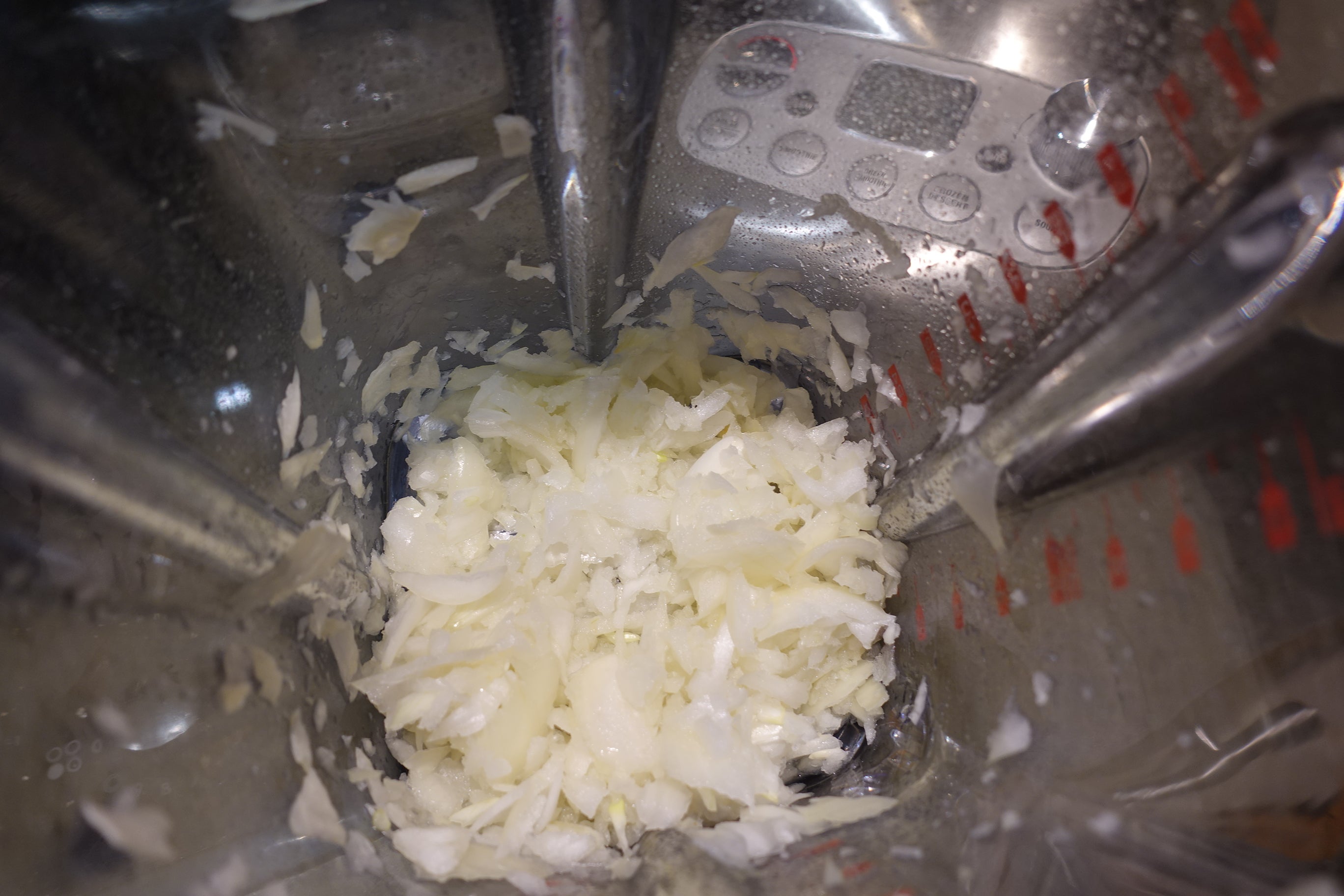 Whipping cream proved less convenient: after just under 30 seconds at “chop” speed, 300ml of whipping cream started thickening. However, it was difficult to get out of the large jug, despite the mixture not being that thick.

I had more success with blending mixed roasted nuts and seeds for a nut butter. After about 2 minutes of crushing the nuts and the mixture becoming ever-so-slightly moist and sticky at the top “blend” speed, I added some sunflower oil, cacao powder and honey to make it smoother and tastier. A further 1min 40secs and it was ready. Your blending time will depend on the type and freshness of the nuts used to make the butter.

Should you buy the Sage Super Q Blender?

If you’re looking to invest in a high-end blender that delivers a range of functions and some easy-to-use programmes, you’ll struggle to find another machine as exemplary as the Sage Super Q.

If the price is an issue here, the KitchenAid Artisan High Performance Blender 5KSB6060 is slightly cheaper and equally competent. However, note that it doesn’t come with pre-set programmes or instructive speeds for various tasks, leaving you to figure out what’s best.