What is the Sage Smart Grill Pro?

The Sage Smart Grill Pro looks like a George Foreman grill or a Panini press. It is, in fact, an electric grill for the serious foodie, which cooks food with scientific precision thanks to its integral temperature probe.

Tell the Sage what you’re cooking and stick in the the probe. In return the grill will give you precise instructions on when to remove your food items, while also allowing for resting times to ensure your dinner isn’t overcooked. The grill opens a full 180 degrees, too, for use as an electric barbecue – the perfect back up for British summers. 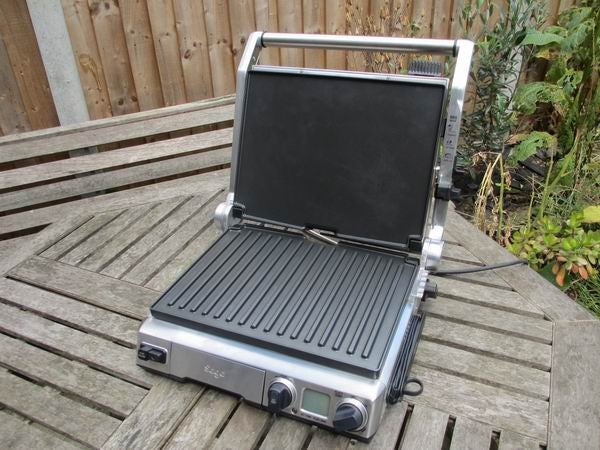 The Sage is fairly sizeable: like a George Foreman grill or a Panini press, but significantly bigger. So we imagine most folk’s first thoughts will concern where to store it.

It also has a brushed stainless-steel finish, which is a magnet for fingerprints even before you start cooking with it.

Aside from that, though, the industrial design is impressive. On the underside of the Smart Grill Pro there’s space to stow the cable when the grill’s not in use, and on its right-hand side there’s a place to loop the cable for the temperature probe. There’s also a large drip tray beneath it. 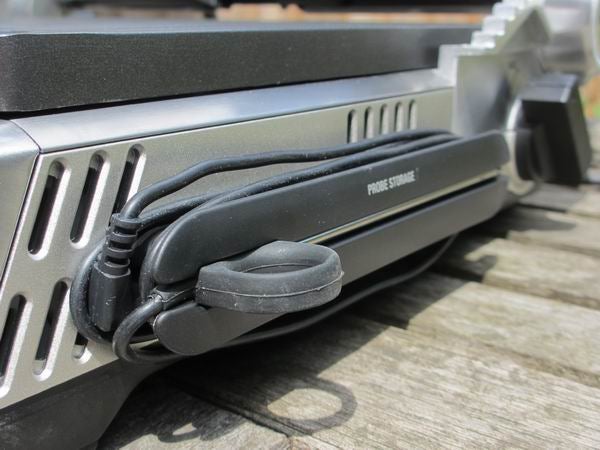 The grill has a couple of unique features. The first is five smart cooking modes for beef, lamb, pork, poultry and fish. After selecting the mode you want, you then turn the knob to tell it how well done you’d like your food. The second feature of note is the grill’s temperature probe, which plugs in on the right-hand side. Together, these features enable you to tell the Sage what you’re cooking, and in return it will inform you when your food is ready.

Offering various height and angle adjustments, the Sage Smart Grill Pro can accommodate a number of different foodstuffs. In addition, it opens out a full 180 degrees for use as an electric barbecue. Of the two grill plates, one is flat and the other ridged, and the position of both – bottom or top – is interchangeable. 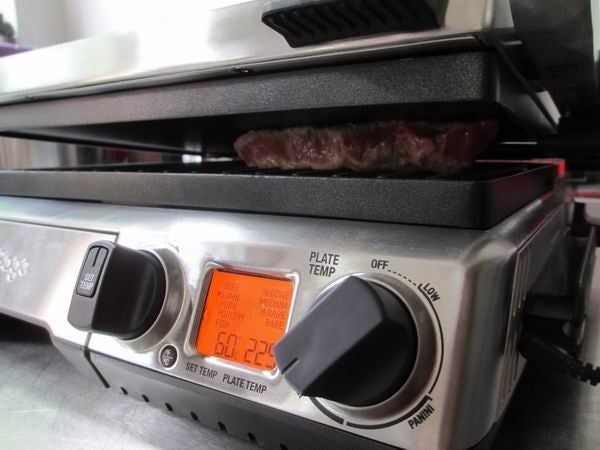 Sage Smart Grill Pro – What’s it like to use?

We started out cooking a lamb steak, medium-rare. The grill set itself to 225°C and we inserted the probe into the steak. It was tricky to ensure that the rubber end of the probe and the cables didn’t touch the grill plates. It took less than 2 minutes to cook; then, as instructed, we removed the steak and gave it 3 minutes to rest. While the end result certainly looked ready to eat, it was in fact rare. Popping it back on for a minute, however, resulted in a steak that tasted delicious.

This experience was repeated throughout our cooking on the Sage. Its medium pork burger was medium-rare in our opinion. This was of particular concern with the “medium” chicken – it just didn’t look safe to eat without popping it back on for a second go. The poultry mode rightly offers only medium or well done settings, but in our experience the chicken was neither. 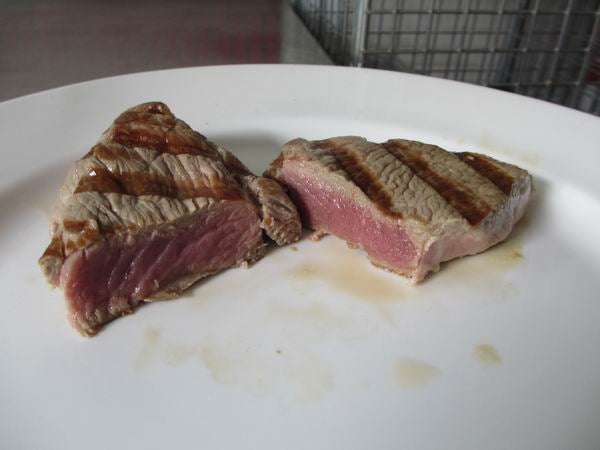 That said, once we’d figured out which modes worked best for our preference, the results tasted great and were very consistent.

The Sage Smart Grill Pro tackled veggie kebabs well too: they were cooked evenly and quickly. For such items you simply unplug the temperature probe, which switches off the smart modes, leaving you with a simple grill that works well.

Cleaning the cooking plates was a breeze: they pop off easily and have a good-quality, non-stick finish. However, as already mentioned, the appliance itself attracts greasy fingerprints and the controls are positioned where they’re easily splattered with cooking fat. 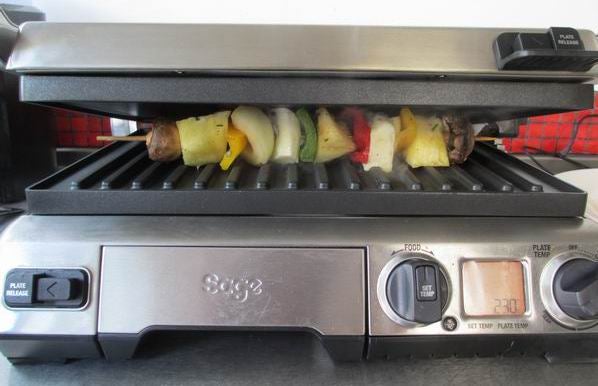 Should I buy the Sage Smart Grill Pro?

For meat-lovers, the Sage Smart Grill Pro does a very good job of cooking items quickly and precisely, serving up delicious results. But as an appliance it isn’t hugely versatile – as a Panini press it’s complete overkill, for example. It’s also pretty sizeable, not to mention pricey.

If you’re a foodie, we’d recommend the Cobb Premier barbecue – and if you’re a foodie for whom money is no object then the Big Green Egg MiniMax is an even better option. And if you’re simply after a good, techie barbecue then you should consider the fan-assisted Lotus Grill.

The Sage Grill Pro’s smart settings will delight meat-lovers, but its size and price count against it.