What is the Sage Quick Touch Crisp?

The Sage Quick Touch Crisp is a microwave-grill combi that has all the foodie features we’ve come to expect from Sage.

That includes a huge array of cooking programmes, a crisper pan for all-round cooking, and intuitive controls. It’s a superb appliance – but pricey. 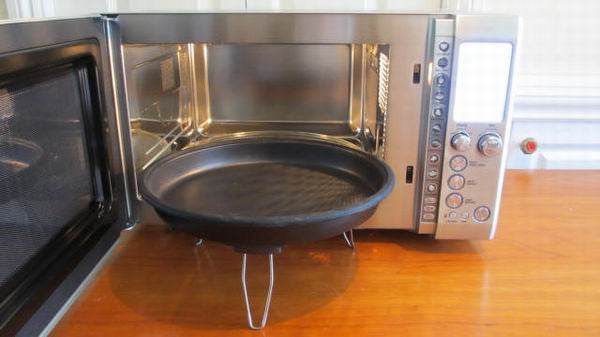 The Quick Touch Crisp looks very similar to the Quick Touch and its polished stainless steel finish. However, this newer model is a microwave-grill combi and comes with a clever 290mm Crisper Pan on legs that fold down for grilling and fold away when you want the pan down low. Its inverter microwave regulates power for more even heating.

You can cook straightforwardly, or plump for Smart Cook/Grill, Smart Reheat or Smart Defrost – all from the control panel to the right. These in turn lead you to written menus to select the food type; there are too many to list here. There are 16 options for Smart Cook/Grill alone, and some of these break down into further sub-menus. You can cook all sorts: everything from roasted veg to toasted nuts. 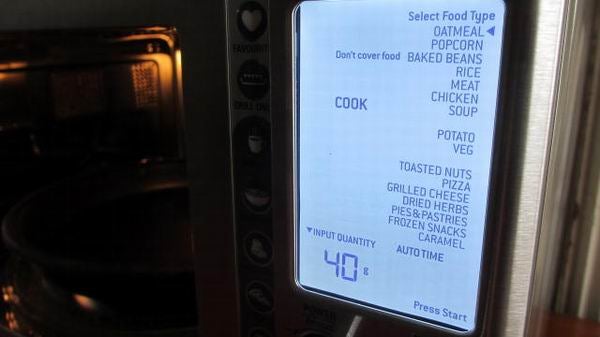 There are also ten shortcut buttons hidden just inside the door. One button is for saving your favourite programme and one is for grilling. The others are for popular foods: beverages, baked beans, baked potato, pizza, grilled cheese, caramel, melt chocolate, soften butter.

Controls and features are impressive. There’s a clock, kitchen timer, child-safety lock, and the Quick Touch Crisp also presents you with the option to choose whether weight is displayed in grams or ounces. Finally, Sage’s popular ‘A Bit More’ button does exactly what it says on the tin. 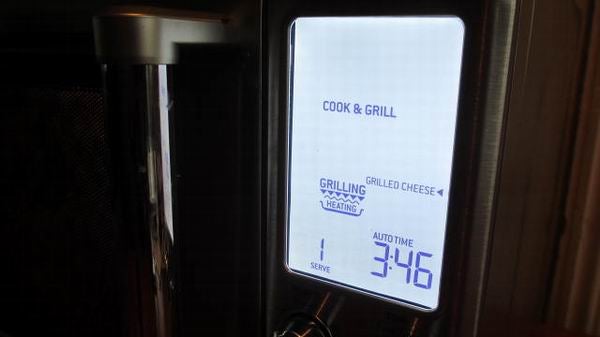 Sage Quick Touch Crisp – What’s it like to use?

Cheese on toast is a great test of a grill, so I put the Sage’s Grilled Cheese programme to the test – it can be used for closed or open sandwiches. The programme uses the Crisper Pan, which is designed to heat up in the microwave to brown and crisp foods that would otherwise become soggy from microwave cooking – pies, quiches, pastries and pizza, for example.

First it preheated the Crisper Pan for three minutes, then the instruction manual told us to add a slice of bread (buttered on both sides) and to flip it and add cheese half way through the cooking time of six minutes.

The result was delicious: moist and both chewy and crispy. Arguably, the next time I’d opt to stop the program 30 seconds earlier. The Crisper Pan will accommodate up to three slices of bread. And it was easy to keep an eye on progress because the cavity of the appliance is well lit. 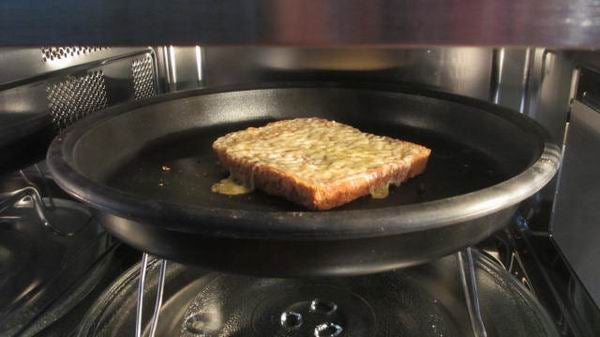 Cooking frozen pizza was pretty similar. Select the Pizza programme – you can choose fresh or frozen – then whether you’d like to preheat the Crisper Pan for three minutes. Then you choose a quantity: one to six slices. My single slice had a cooking time of six minutes.

After three minutes I was prompted to rearrange the food – although there was little point with only a single slice of pizza in the Pan, it was a good reminder to check on progress. The pizza was already pretty cooked, so I stopped it after four minutes of cooking time. The underside was subtly crisped and the top was melted. The cheese had over-spilled a little, but hadn’t burned on the pan. The pizza tasted pretty good.

My only criticism of the controls then is that you press any button to wake up the Sage, then have to press a second time to select it. Why not just once? 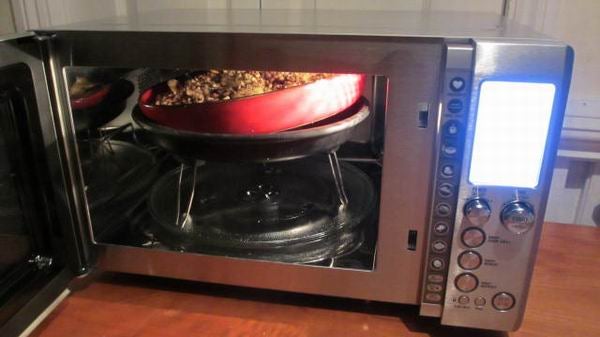 I couldn’t find a combi setting ideal for cooking a dish of cauliflower cheese, so I microwaved for a while, then put it on a Cook & Grill programme designed for fresh pizza, microwaving the dish for a bit longer. The grilling was tricky because our dish didn’t quite fit on the Crisper Pan. As a result, it sat at an angle so one side of the dish was done a little more than the other. I’d have welcomed greater control of the grill level.

Defrosting a pitta bread involved manually selecting the power and cooking time, because it doesn’t fit into the four categories (meat, chicken, soup, frozen meals) or quantities (100g minimum, sometimes more). But setting the microwave was intuitive: turn the power knob till Defrost is on-screen, then use the right-hand knob to adjust time. The pitta came out warm, but a bit moist. I tried the ‘A Bit More’ button just to see what it did and it defrosted for a further 10 seconds: a good choice if you’ve just done 30. 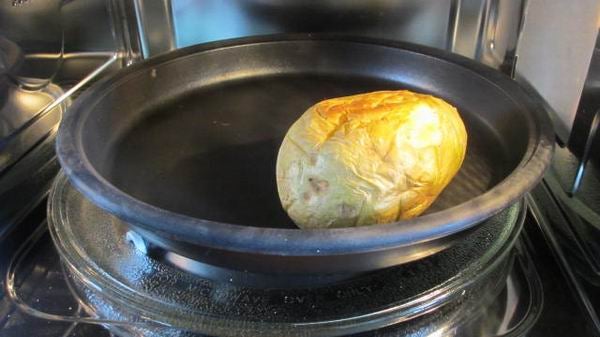 Finally, the jacket potato: another test of the Sage’s shortcut programmes. Our 400g spud was on the large side but the instructions suggest a 300-400g potato, so I entered it in the menu as a single spud and followed the instructions to use the Crisper Pan down low and arrange the potato(es) to the outside. It began a nine-minute cooking time, prompting me to turn the potato halfway through this time.

At the end of the nine minutes, the spud was nowhere near cooked. ‘A Bit More’ offered a further 1:21 minutes of cooking. Still a long way to go. At this point, it would have been nice to have the option to hit the button twice for a ‘A Bit More Bit More’, but since that wasn’t an option, 1:21 minutes it was. In the end, it was fourth time lucky –  a total cooking time of just over 14 minutes.

The result was pretty good: fluffy on the inside, and a little crisp top and bottom. It was an improvement on a microwave-only potato, but not a marked one; you couldn’t pass it off as being oven-baked.

I was impressed at how little the cavity steamed up, however. And because the Crisper Pan is hot metal, there were no signs of condensation on it to make food soggy. Cleaning up was pretty easy: the Crisper Pan is dishwasher-safe. 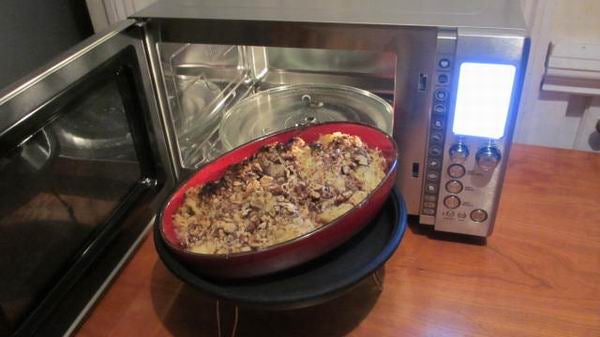 Should I buy the Sage Quick Touch Crisp?

If the price tag doesn’t put you off, then this is a great buy. Its foodie features will appeal to the keen cook and the controls are straightforward to prove attractive to the novice too.

If you’re on a budget then look at the Panasonic DF386 combi or the more basic, microwave-only Beko MOF 20110.

The Sage may be pricey, but it’s fantastic for foodies.