With its exceptional looks and stable temperatures across the range, the Russell Hobbs RH8WC2 seems like something of a bargain given its low purchase price. The sting in the tail is that the running costs are exceptionally high for such a small fridge, so you may want to consider a slightly more expensive model that has lower yearly costs.

The Russell Hobbs RHWC2 is a compact, eight-bottle wine cooler, ideal for placing on the worktop. Its stylish, mirror-finish door and touch controls won’t look out of place in a contemporary kitchen, and the interior light adds to its classy looks. It has a good temperature range from 8 to 18ºC and promises to be fairly quiet too.

The RH8WC2 lives up to its billing, offering stable wine cooling, a vibration-free motor and quiet running. The controls are slick, and its looks comfortably belie the humble asking price. Seriously expensive running costs let the side down, however.

Despite having a name that sounds like a postcode, the Russell Hobbs RH8WC2 is a handy wine cooler designed for those tight on space. If you can’t accommodate a big-capacity cooler in the kitchen, then this eight-bottle model (456 x 250 x 515mm) can be placed at the end of the worktop or squirrelled away beside a living-room cabinet.

You’ll need a couple of extra centimetres of width to open the door, and vents on the sides and rear mean that this cooler requires some air space. The manual recommends 5cm to the side and 10cm to the rear. We didn’t notice any change in efficiency or cooling if it was placed with one side tight to a kitchen cupboard. We’d give it a bit of airspace at the rear, though, since that’s the main vent for the cooling. 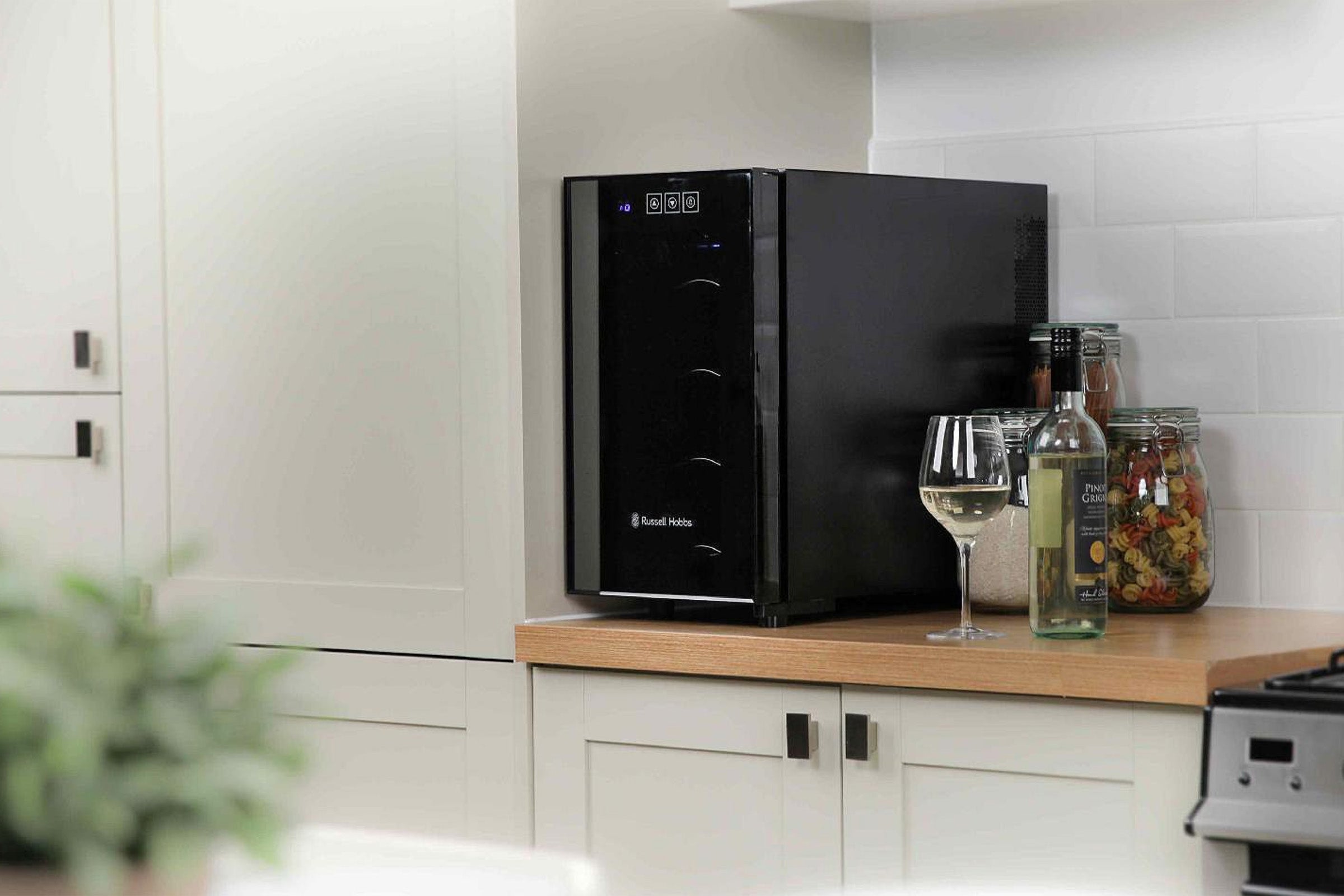 Cooling comes courtesy of a compact thermoelectric system that fits neatly within the rear of the cabinet. That affords plenty of space on the inside for eight bottles, without any steps or cut-outs for a traditional compressor. The motor is vibration-free and near-silent, although cooling and circulation fans do create some noise. The RH8WC2 is a very neat solution, if not a particularly energy-efficient one. It scores a grim B-rating for energy efficiency.

The neatness of design continues around the front. The satin-black cabinet is fronted with a lush-looking mirror-finished door. Top of the door is a blue LED temperature display and touch controls for temperature adjustment and the interior light. The Russell Hobbs badge is neatly understated, and the overall cosmetic is way classier than its £90 asking price would suggest. 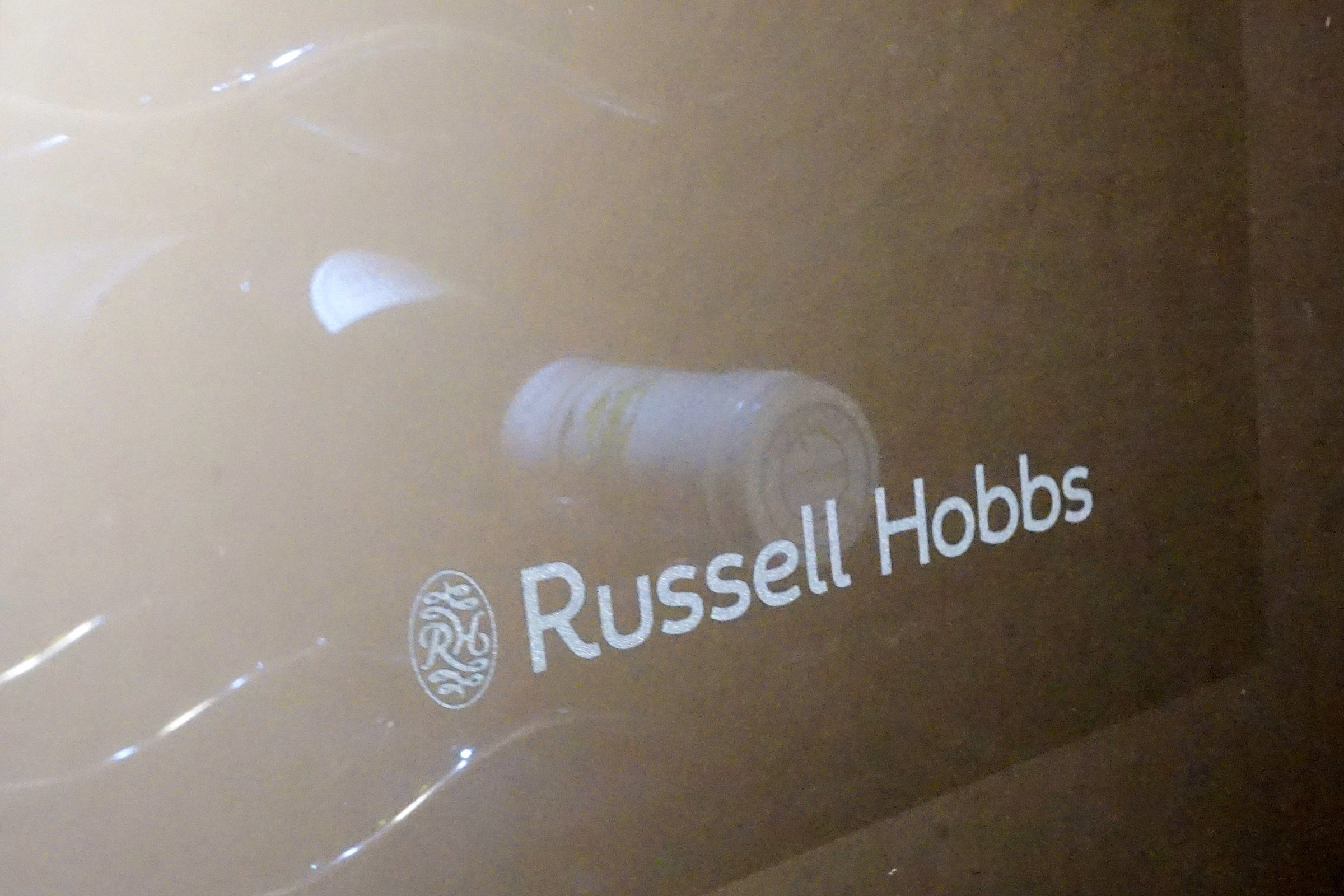 The door opens on a right-hand hinge, with handle indent on the left. Sadly, the door isn’t reversible. On the plus side, this has allowed Russell Hobbs to conceal the hinges, further adding to the sleek appearance.

The range on the thermostat is 8 to 18ºC. At its lowest we managed to get the interior down to 8.3ºC, and 18.5ºC at its highest. That isn’t quite cool enough for some white wines that need serious chilling – champagne, for example. However, that range does cover ideal storage temperatures for the vast majority of common whites and reds. 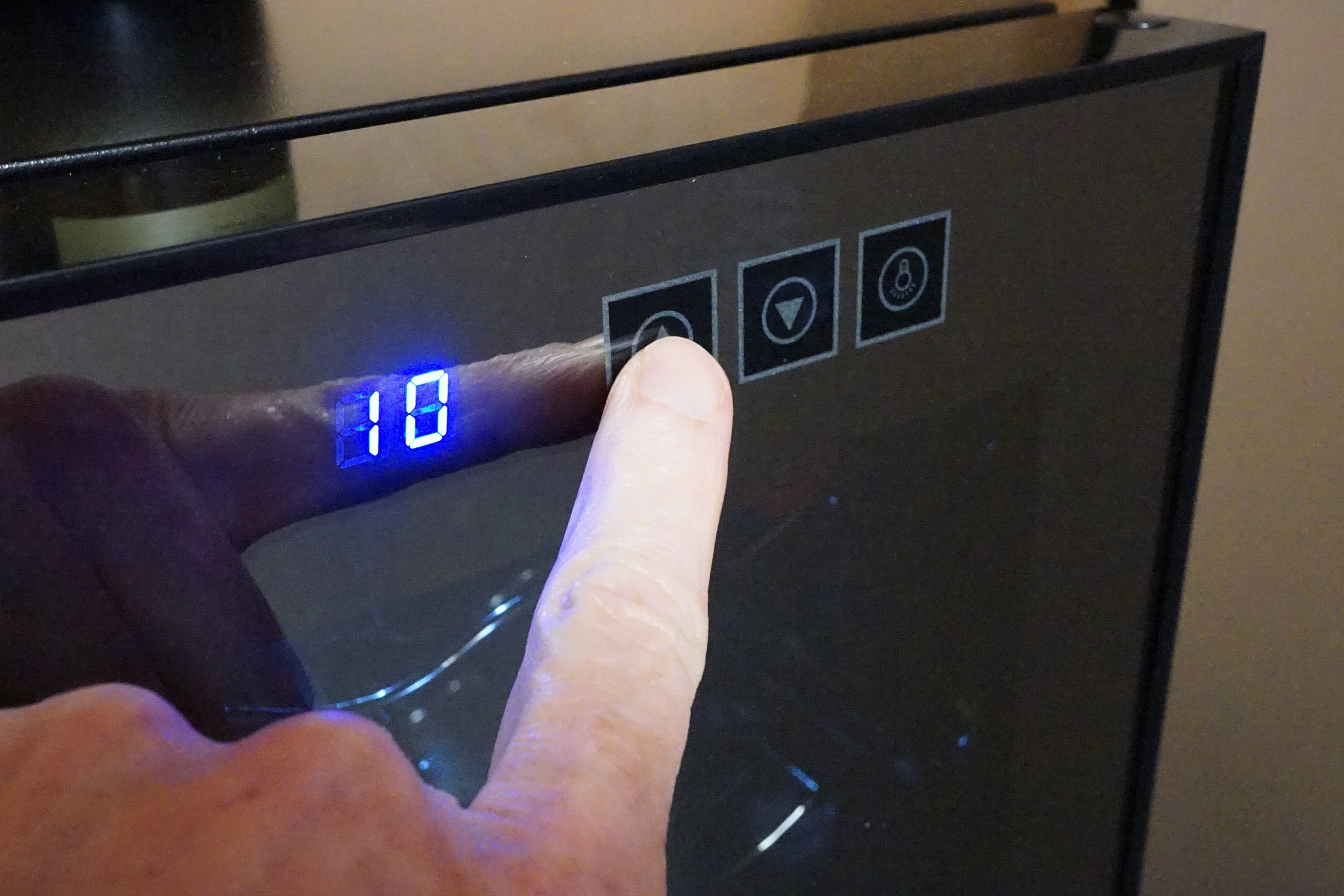 The interior light is an LED fitting set in the middle of the compartment’s ceiling. It’s bright and does a fair job of allowing you to see the wine when the door is open. Its main job is to look good, though. In a dimmed kitchen the light allows you to see inside the cooler, illuminating your finest connoisseur vinos. Highlighting eight bottles of Tesco value Pinot Grigio might not have the same kudos, so you can manually turn the light off too. Storage space is eight bottles spread over four chrome wire shelves. The shelves can be removed, but aren’t designed to slide out with the wine on. 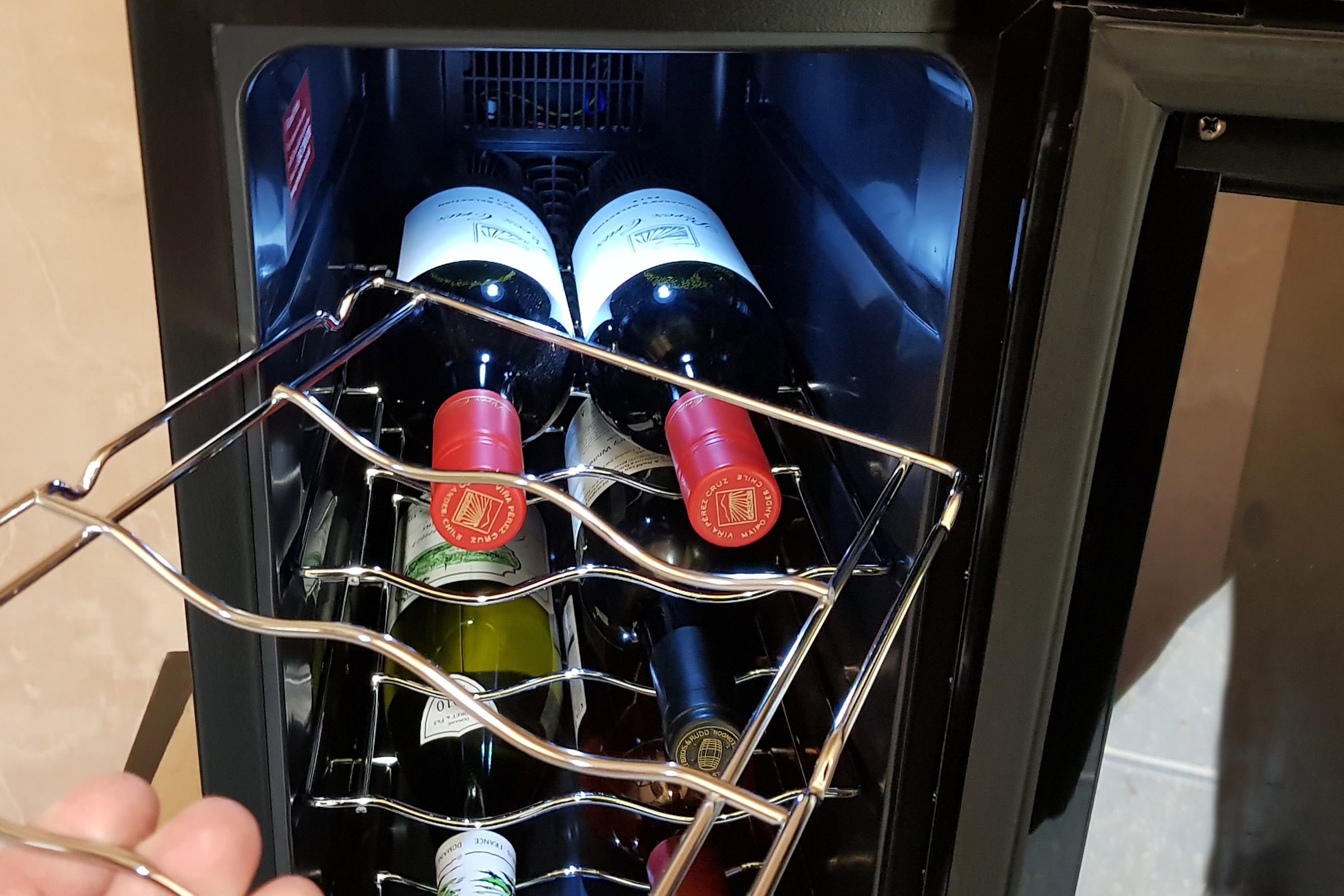 Unlike some of the wine chillers we’ve tested, Russell Hobbs has provided a decent amount of space on the shelves for larger bottles. We found that 77mm-diameter Bordeaux-style bottles slotted in and out with ease. 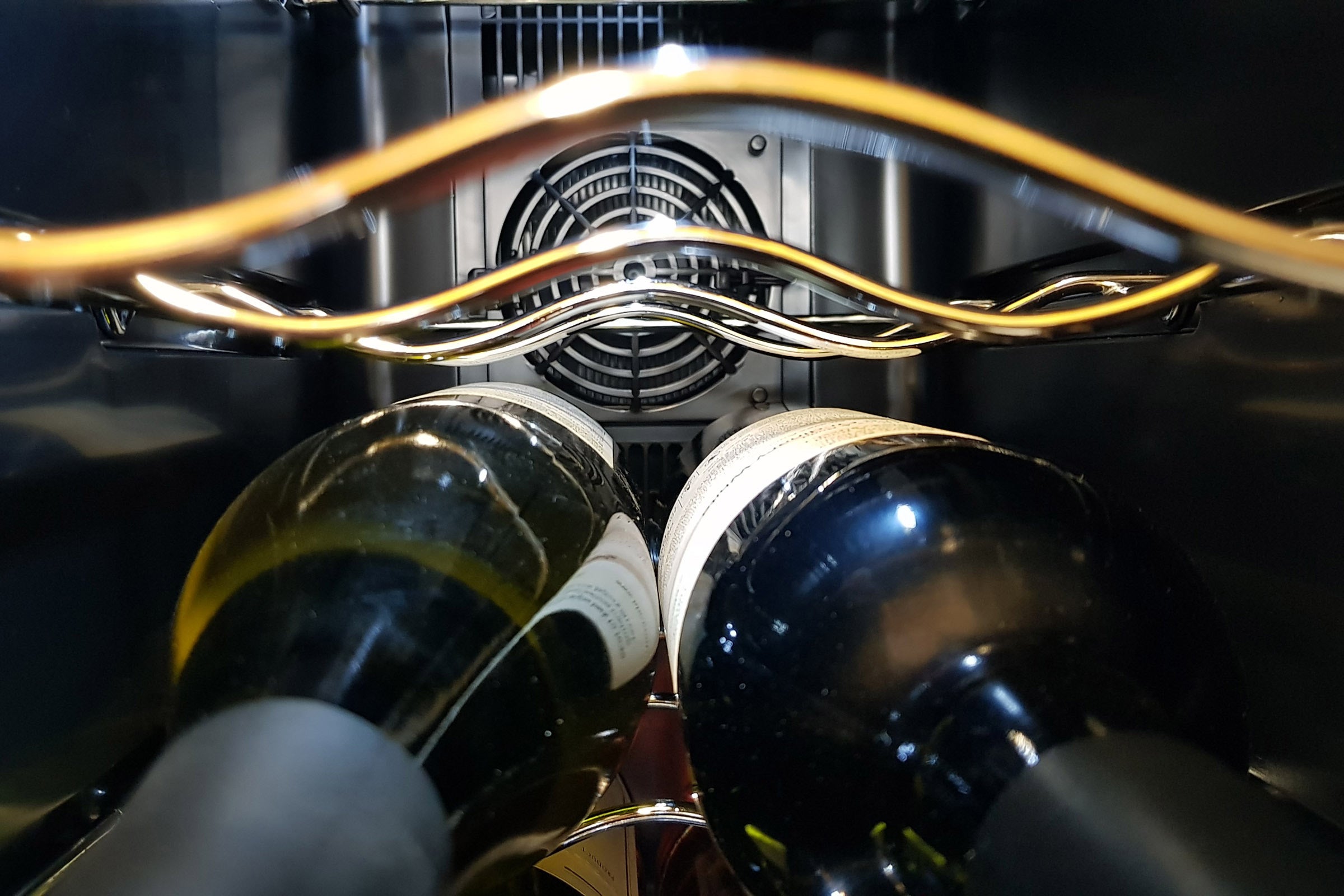 Larger 83mm bottles, such as the Sancerre in our test, also fit in well. There’s a little room above each bottle, so the wire rack isn’t sitting on the bottle or scuffing the label. 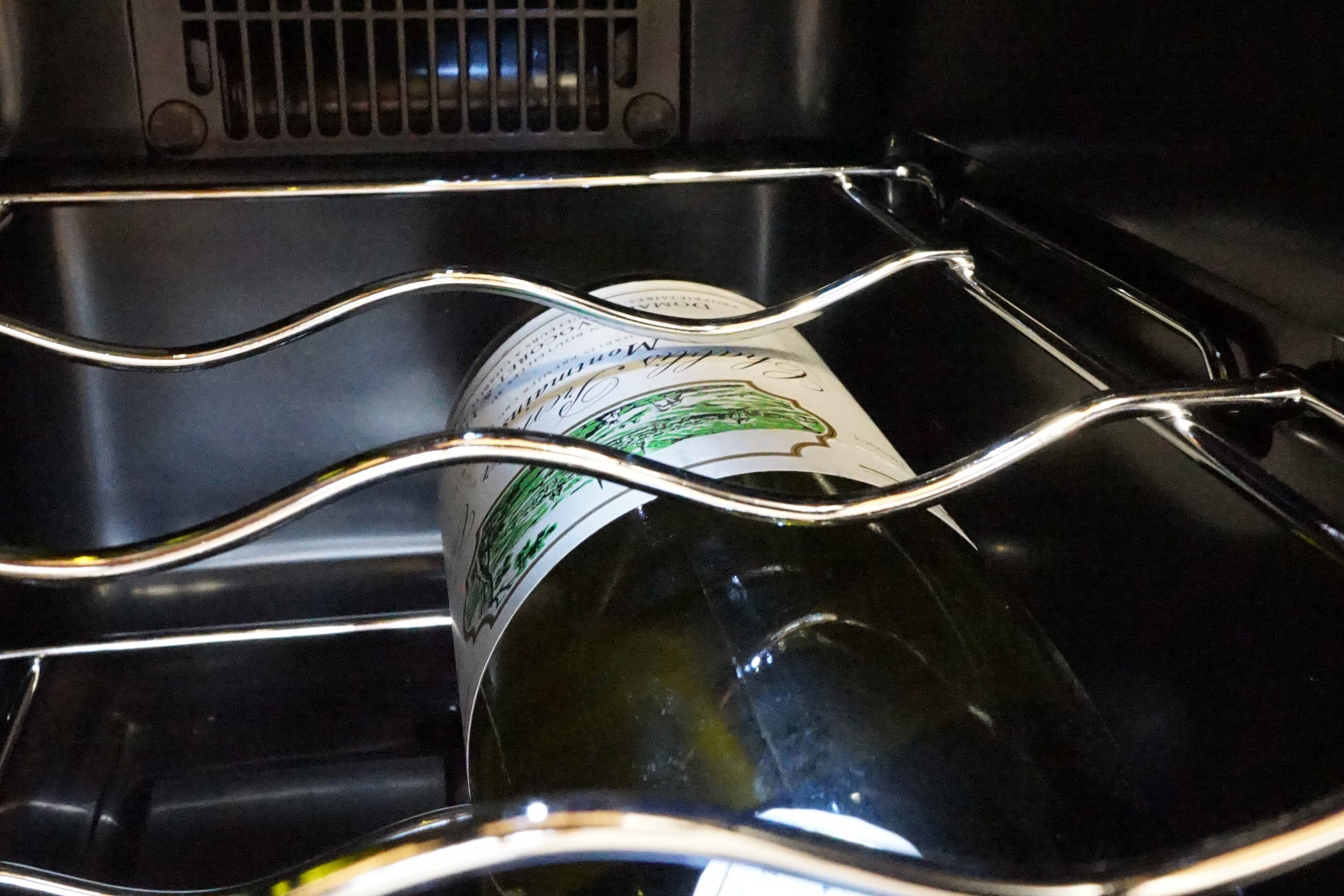 Our only gripe with the interior layout is the position of the overhead LED light. It’s a little way back into the cabinet, meaning a lot of its output is obscured by the top two bottles. That does cast shadow to the rest of the compartment, particularly if you’re storing darker reds. 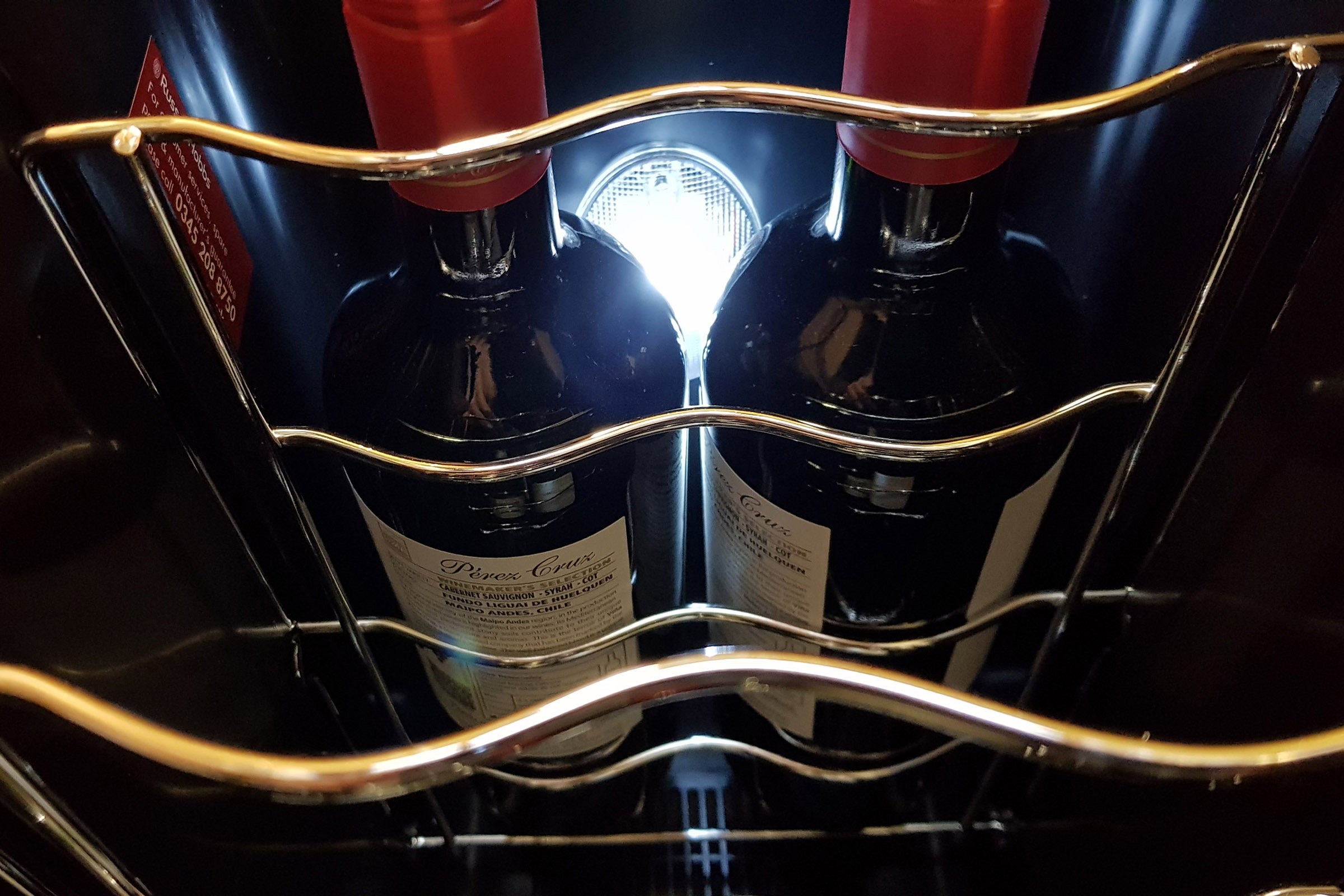 Thermoeclectric coolers are very quiet in operation since they don’t have any moving parts. The only noise you hear is the fans that keep the motor cool and circulate the cool air internally.

Both fans are well executed and run quietly. While we didn’t quite measure the super-silent 38dB that the energy label would have us believe, we found the RH8WC2 ambled along at around 39dB. That’s super- quiet and as low as many top-spec fridge freezers.

Given that this wine cooler is designed to sit on the worktop, rather than insulated in a cupboard, quiet running is essential. This RH8WC2 achieves that nicely.

The RH8WC2 isn’t in a hurry to get your wines chilled. It took near 36 hours to get the internal temperature and eight bottles of wine down to the target 8ºC. That is not unusual for coolers running thermoelectric pumps.

Once it had, the temperature remained stable and didn’t vary up and down as you’d expect of a traditional compressor fridge. It was a little cooler at the bottom than the top, but not by much. The lowest shelf ran at 8.3ºC and the upper shelf at 8.8ºC. Neither varied by more than +/- 0.3ºC, which is great for keeping your wine in prime condition. 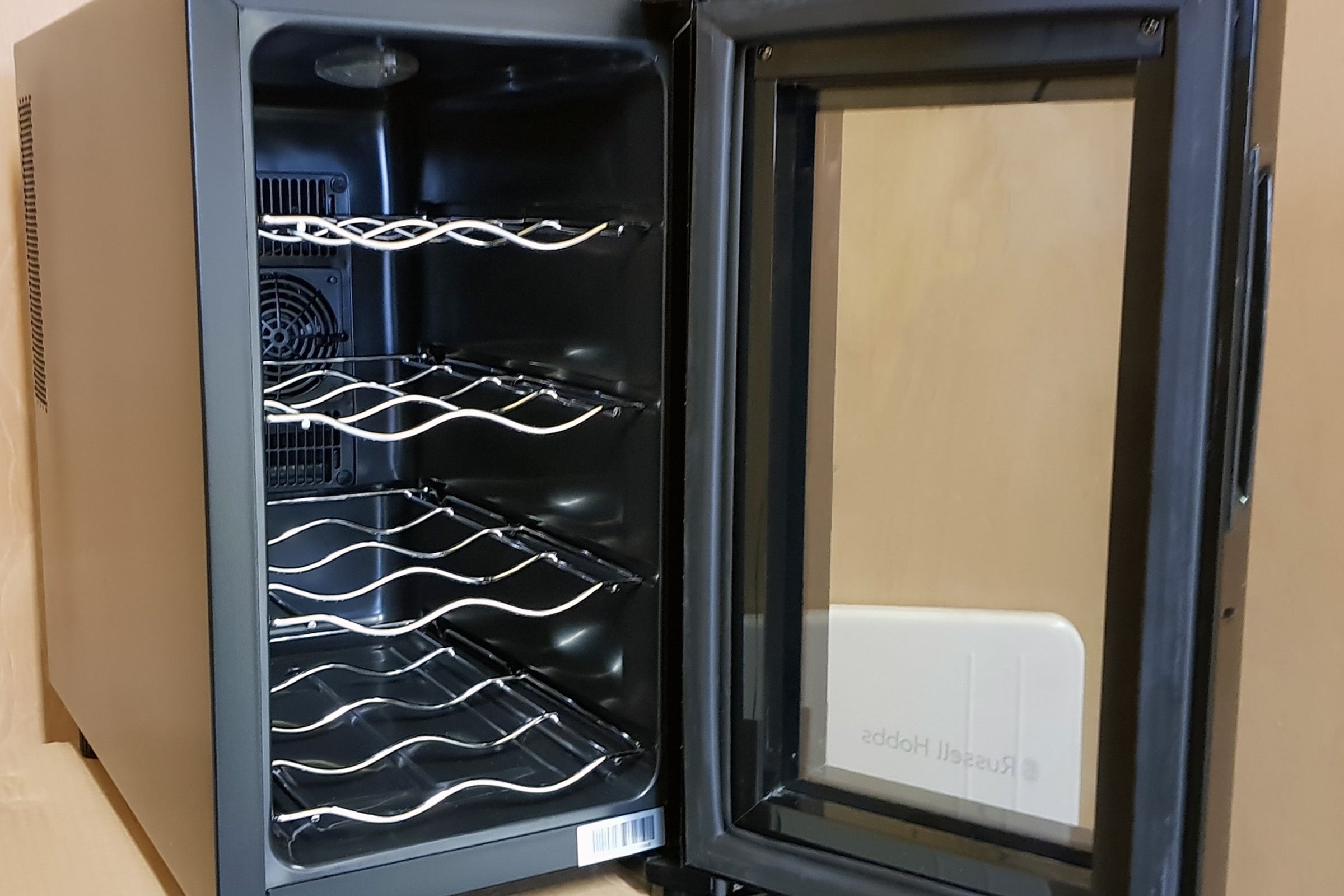 At the other end of the spectrum, we set the thermostat to 18ºC. That’s only marginally lower than the temperature of the environmentally controlled chamber in which we test fridges. As such, the little cooler didn’t have a lot of work to do. Once it had stabilised, the internal temperature was around 18.8ºC. Temperature was consistent throughout the compartment, although this was no surprise given the similar temperatures inside and out.

By personal preference, we’d have liked to have been able to set a slightly lower temperature, say 6ºC, to super-chill some whites. Yet you can’t argue that the RH8WC2 delivers on its specification range and does so quietly and vibration-free. Your wine will love you. 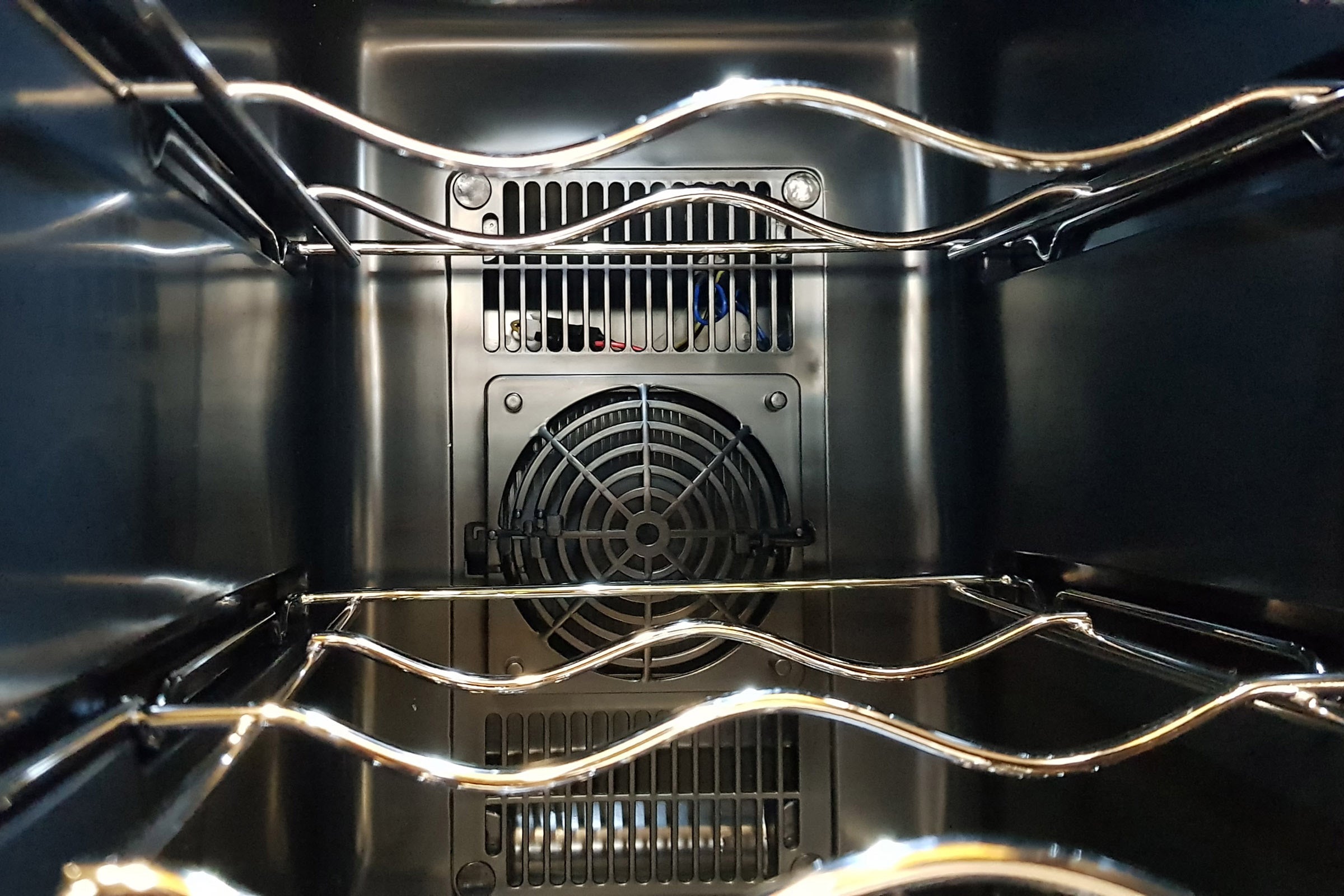 We’d been super-impressed with the RH8WC2 thus far. Then it all went wrong. Looking at our energy meters, we realised this miniscule 23-litre ‘fridge’ had a thirst for electricity that could put some full-sized fridge freezers to shame.

Running at its lowest 8ºC temperature, it used a fairly whopping 2.9kW for the week on test. That’s 43.5p at an average 15p/kWh –  or close to £23 per annum. While not a deal-breaking figure, being no more than a good bottle of plonk in a restaurant, for example, it’s horrific if calculated per litre of cooling.

Moreover, our measured figure of around 150kWh per year is lower than the energy label’s stated 162kWh. Since the label ratings are tested at higher ambient room temperature than we use, it rather suggests running costs could be higher in warmer environments, such as hot and steamy kitchens. 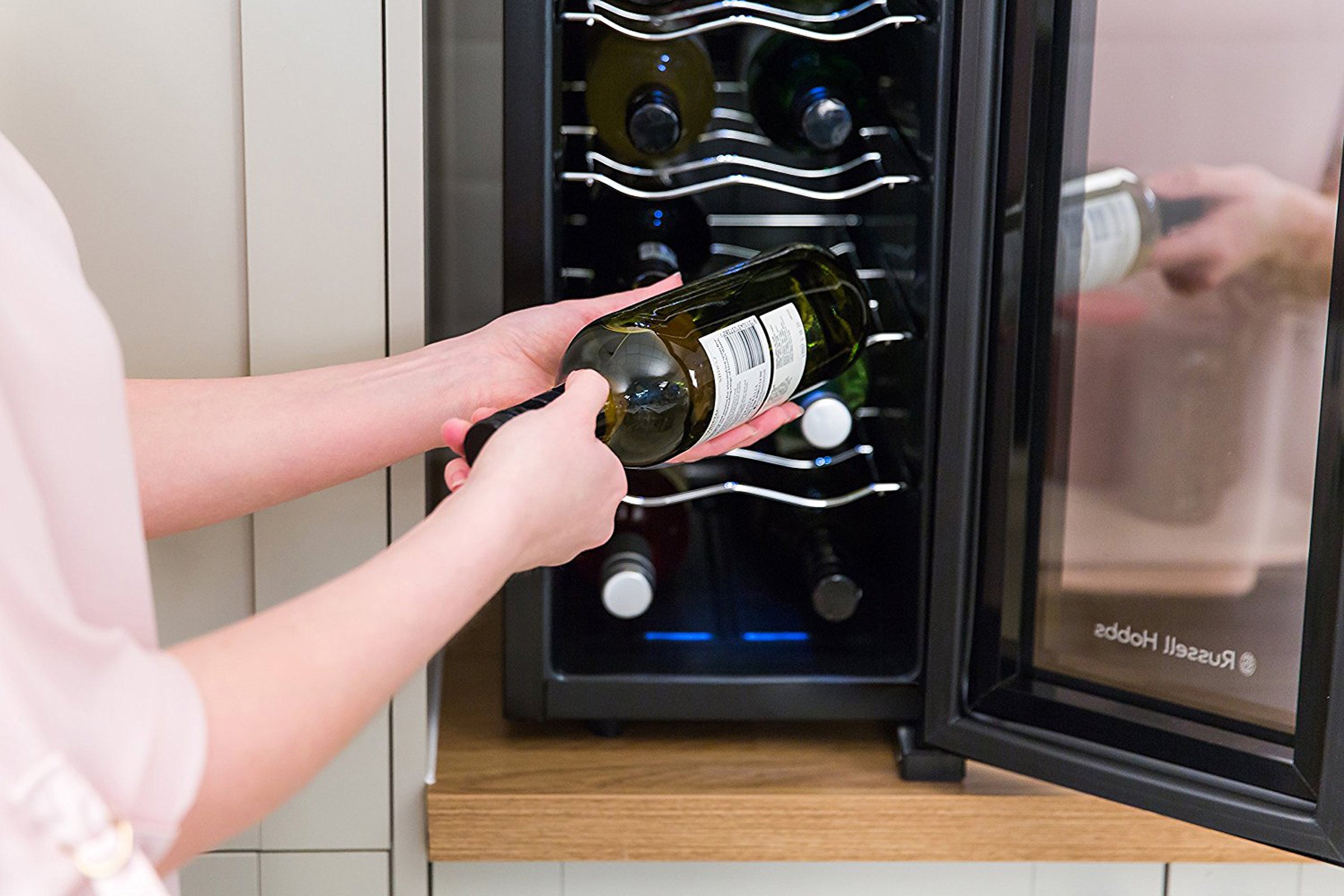 Set at 18ºC, the RH8WC2’s running costs come down dramatically. We measured under 1kWh per week, or about a third of the lowest temperature running costs. That doesn’t seem so bad for keeping your big, bold reds at just the right drinking temperature.

However, there’s no getting away from the maths. For a ‘fridge’ chilling a bijou 23-litre capacity to a just 8ºC, the RH8WC2’s running costs per litre are very high; by far the worst of any fridge we’ve ever tested in fact. Ouch. 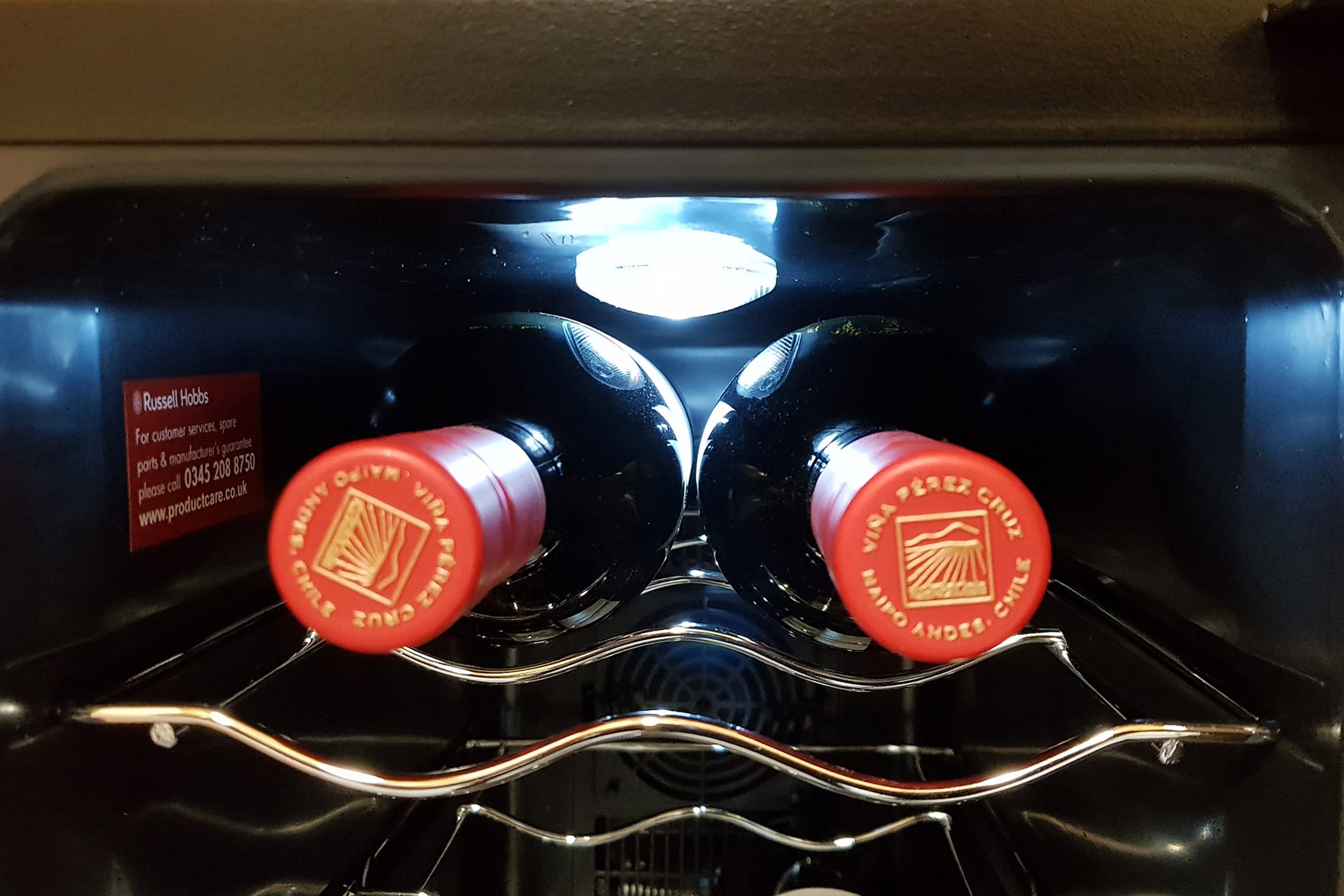 Should you buy the Russell Hobbs RH8WC2?

Compact, effective and stylish – the Russell Hobbs RH8WC2 wine cooler effectively keeps up to eight bottles of wine at any temperature between 8 and 18ºC. The vibration-free motor further helps wine conditioning, there’s plenty of room for larger diameter bottles, and the interior light works well. It runs quietly, so fine for the worktop, and nicely affordable to buy too. A five-star bargain? Well, not quite.

The RH8WC2 has an Achilles’ heel in its running costs. Woeful energy efficiency means that, at its lowest temperature, it sucks electricity like a small fridge freezer. That’s around £25 per year set at its lower temperature. A decade in use will see running costs stack up to three times the purchase price.

There is no denying that Russell Hobb’s RW8WC2 looks great and works well, but don’t let that low price make you think it’s an all-round bargain.