The Russell Hobbs Grind and Brew is fine for brewing bigger pots, but needs some extra tweaking when it comes to smaller amounts. Its blade grinder, integrated into the brewing system, produces somewhat uneven results, but gets the job done as long as you make at least six cups at a time. To grind smaller quantities of beans, you need to go against the recommended settings and increase the grinding time, and to brew smaller amounts of coffee, you’re likely to need to ramp up the strength level.

The key appeal of the Russell Hobbs Grind and Brew is convenience: pop the beans in the machine, fill the water tank and set the timer to have a freshly ground and brewed pot of coffee by the time you get up in the morning. While this coffee maker runs into some difficulties when it comes to grinding and brewing smaller amounts of coffee, it’s a decent product for its price if you can get it at a discount. (At the time of writing it was available at about £70, half of the RRP.)

Design – Hefty but innocuous with clear buttons and screen

While the black plastic of this machine’s body seemed a little cheap to me at first, the metallic accents, wide and clear buttons and the display come together to give it a decent overall appearance.

Its footprint is a little larger than your average filter machine because of the added grinder function, even though the grinder is actually built into the reusable filter. The latter has been cleverly given a brown finish, so it won’t appear to stain as much over time. 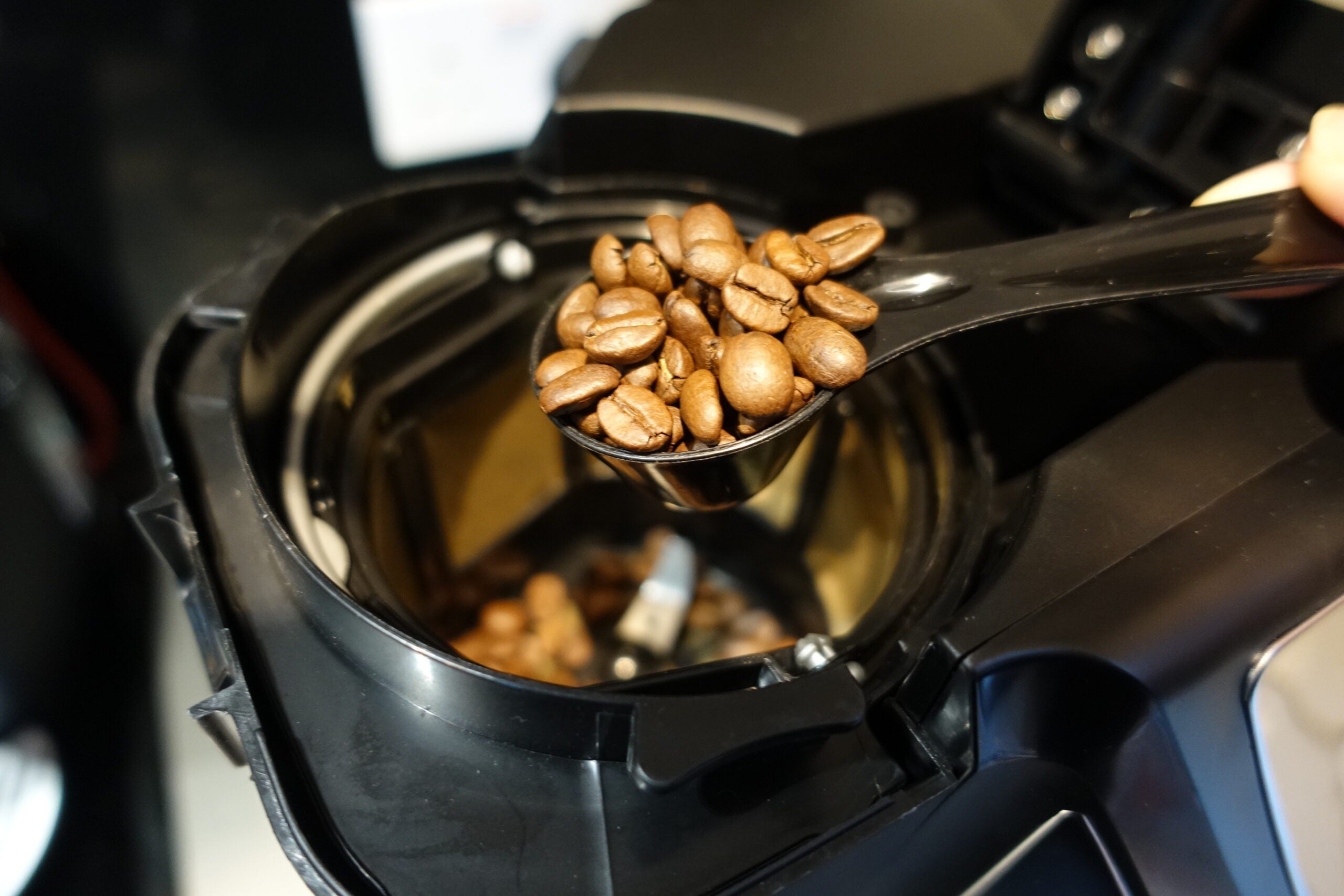 There is no option to use paper filters because of the blades in the filter. While reusable filters are more economical and environment-friendly, you tend to get better flavour using paper filters. 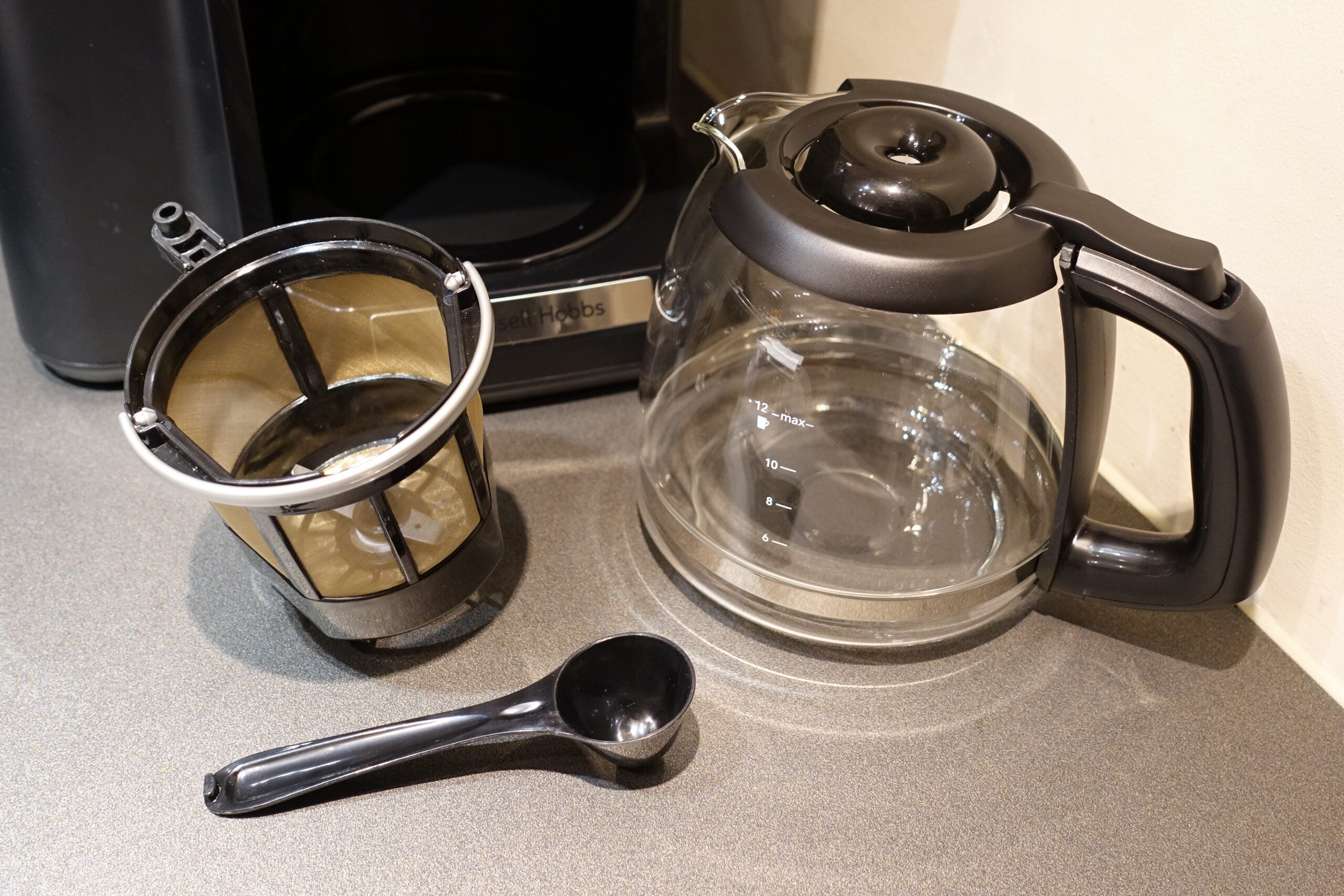 The front panel features a screen with three buttons on each side and the on/off button underneath. The latter will light up when the machine is switched on and while the keep-warm function is activated. The rest are for setting the time and the timer, and regulating the grind and coffee strength. 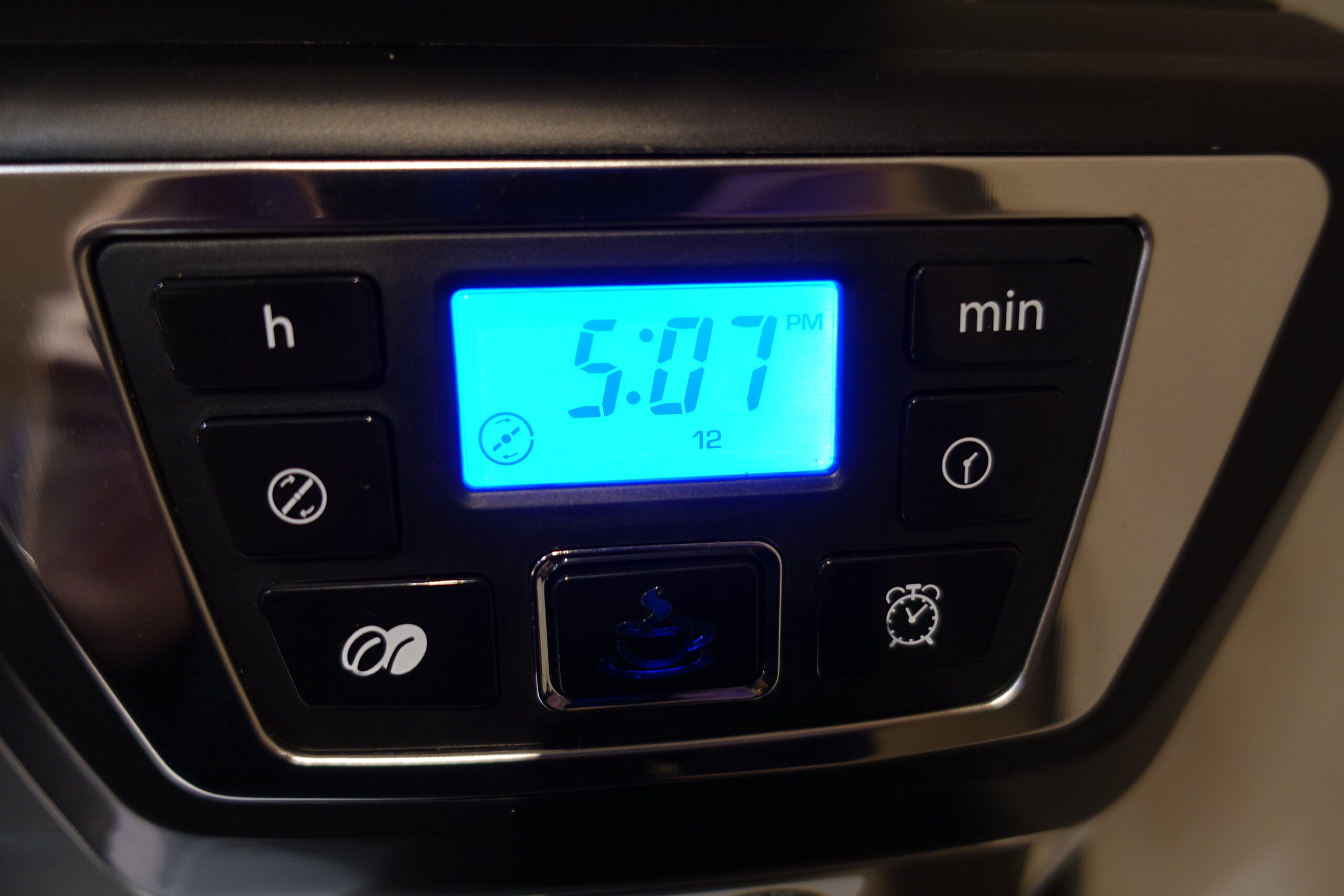 The grind button allows you to switch it off (when using pre-ground coffee), or set the grind amount to four, six, eight, ten or 12 cups. The number of cups chosen will extend the grinding time accordingly, taking about 10 secs with four cups and up to 30 secs with 12 cups. It’s not recommended to grind less than four cups worth of beans (equivalent to four heaped scoopfuls of beans using the supplied scoop). To make two cups’ worth of coffee, pre-ground coffee must be used.

The coffee strength button allows you to increase the strength of your brew from the default level to “stronger” or “even stronger”. Activating one of those levels before brewing means the process will be slower (adding about a minute with each level), so the hot water is in contact with the coffee grounds for longer.

You can also have a quick cup in the middle of brewing: a non-drip valve prevents coffee from dripping on the hotplate, so the carafe can be briefly removed. However, the instructions warn to replace the carafe after 20 secs to keep the filter from overfilling.

The 40-min keep-warm function is automatic, but can be switched off any time or programmed to switch off after 20 or 30 mins instead.

My first few tests grinding and brewing four cups from my usual arabica beans produced coffee lacking in flavour. While using the strongest setting gave the best result, this came with a lingering bitterness rather than balanced flavour.

Things improved when I made eight cups of coffee on the default setting. The flavour was decent and balanced between bitterness and acidity. The temperature was a little higher here at 79ºC – with four cups it was a perfect 75ºC – but this is understandable considering the longer brewing time.

I then set about observing the grinding results, by stopping the machine after the grinding process and before the brewing starts. The grind for four cups was way too coarse with some bigger bits of bean clearly visible. Things improved with six and eight cups worth of beans, although the results still weren’t entirely even.

The best type of coffee grinder is a burr grinder, which grinds beans between two plates into even grounds. A blade grinder doesn’t technically grind the beans as much as simply bash them around, always resulting in a somewhat uneven texture. However, a burr grinder needs to be kept dry and couldn’t possibly function as a type of in-filter grinder this machine uses.

I decided to increase the grind time by telling the machine I was grinding 12 cups, while in reality I put in four cups’ worth of beans and water. The finer grind here helped me achieve decent and strong coffee on the default setting. This seems to indicate that the grinding times of this machine should be a little longer overall, although the results with greater quantities of beans were not too bad. To test the machine with pre-ground coffee, I made four cups of coffee using beans ground in my personal burr grinder on a medium-coarse setting. Here, the default strength was still a little weak, whereas going a level up felt about right.

So, when trying to make smaller quantities of coffee with this machine (less than six cups), you need to tweak the default settings by ramping up the strength level or grinding the beans for longer. However, for many, making a bigger pot wouldn’t necessarily be a problem: the cups here are small anyway at 125ml (versus the usual 150ml).

Besides the metallic blender sound of grinding beans, this machine kept noise levels relatively low until spluttering a little towards the end of the process.

Maintenance – Grinder means there are more bits to wash than usual

In addition to the blades in the reusable filter – which already make cleaning it a little trickier – and the filter holder, there is a removable part to the lid of the filter unit that tends to get covered in wet coffee grounds. None of these parts are dishwasher safe. However, just rinsing them under the tap is fine most of the time.

The manual recommends descaling at least once a month – a little excessive if you ask me, but it also depends on your water quality and on how much you use your machine. A tell that descaling is due is when the machine’s brewing cycles get longer.

Should you buy the Russell Hobbs Grind and Brew?

If you’re budget-conscious and after a convenient machine that can grind beans and brew in one go, the Russell Hobbs Grind and Brew could be for you – that is if you manage to get it on offer at about £70 rather than its RRP of £139.99.

Otherwise, the Melitta AromaFresh Grind and Brew might be a better option, as it comes with a superior burr grinder, and check our list of the best coffee machines for other recommendations.