Available now on Nintendo Switch and PC, coming soon to PS4 and Xbox One

Being somewhat new to rhythm games, I was unsure what to expect from Runner3. Had I known that beyond having a brilliant soundtrack and fast-paced, impulsive gameplay lay a treasure trove of puns and tremendous one-liners, I’d have played the franchise sooner.

As testing as the most modern FPS games available, Runner3 offers players a chance to test their quick reaction skills, their eyesight in general, and their ability to problem-solve all in one attractive and noisy package. At a time where platform games are making a serious comeback, Choice Provisions has definitely hit the mark.

Choosing to play as feminist icon CommandgirlVideo – CommanderVideo’s more fabulous counterpart – I traversed the lands of the multiverse in style. Twerking and doing the worm-like it’s 1999 again, I tried not to be impaled by spiked logs or wee robots with circular saws for hands.

Charles Martinet, aka Mario, narrates the introduction to the game, where our heroes are on holiday in FoodLand. Here, the aptly named Cheesethröat announces that The Timbletot plans to infect the land with the Wheat Germ, said with as many puns and styles of alliteration that you can think of. The player can then decide whom they’d rather play as before embarking on their speedy journey.

Decidedly more difficult and complex than its predecessors, Runner3 is pretty challenging from the off, with the rapid change in perspective from side-scroller to behind-the-shoulder aiming to derail even the most seasoned of players.

Personally, I found the game handled better with a controller, but it was comfortable and simple enough to play with a keyboard, too. Some of the trampoline jump sections gave me a bit of vertigo – the camera angle swings around as you jump – and gives Runner3 an exceptional real-feel perspective that really pushes the boundaries of what a traditional side-scrolling platformer should be. 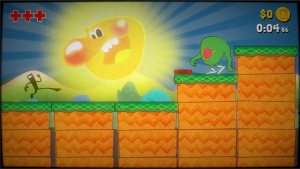 The game boasts a host of new features: side quests from some questionable characters; bonus retro levels that are unlocked when you collect VHS tapes that have complete free movement, as opposed to being stuck running on a horrendously difficult futuristic-looking level that tests your reactions to the limit.

It took me 32 attempts to reach what I assumed was the mid-way point on the very first level of this kind, and I still don’t think my eyes or neurones have recovered.

There’s an in-game shop that, controversially, doesn’t require the player to spend their hard-earned Sterling to purchase costumes and accessories. Instead, the player can use a mixture of gold coins and gems that are collected in game – take note, EA, this is a system that works.

I try to avoid clichés but to say that Runner3 is the Dark Souls of rhythm-based games is an understatement. The notion of “if you fail, try, try again” is at the heart of this game. The same obstacles – enemies, if you will – hinder your progress time and time again, until you either understand the rhythm and feel of the level or get who’s a master of repetitive gameplay to do it for you.

Much like Dark Souls, only minimal clues and tips are given throughout the game, forcing you to rely on your memory and intuition to get through its many levels. There are more than 80 levels in the game so if, like me, you’re a glutton for punishment then Runner3 is the game for you this summer.

Like most games available on PC, PS4 and Xbox One, there are plenty of achievements to unlock and secrets to be found. Aside from the VHS tapes that allow you to play a more retro style of the game, there are various side quests and achievements to complete, such as collecting each of the 100 gold bars in any given level, which in turn unlock the gems in that level for you to go back in collect. 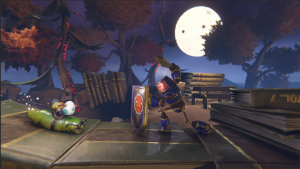 Another new feature of the game that encourages the player to replay levels is the addition of branching pathways, some of which are locked until you collect enough gold bars from that level. This adds another level of anxiety to the game, as you must quickly decide if you’re going left to collect those beautiful golden bars or right to find a secret mission or item that will enhance your overall experience.

Whilst not exactly on par with the side quests found in, say, The Witcher 3: Wild Hunt, they fit the jocular tone of them game well and actually contribute to the ‘story’: namely, getting rid of the irksome and love and happiness hating Timbletot.

There are also other playable characters you can unlock or purchase, including Shovel Knight, adding a new flavour and tone to the game and making it feel less like “time to die” and more like “time to kick this door down with 100% accuracy”.

You can also fly planes, ride in cars and even be shot out of a canon in order to destroy your enemies and keep that beat pumping. The backdrops are beautifully and tastefully designed, adding yet more drama and distraction to the most intense parts of each level.

I can’t say I experienced a drop in frame rate during my playthrough, despite the pretty full-on backgrounds and animations throughout the entire game and its menu screens. Clearly, Choice Provisions has put a lot of blood, sweat and tears into this game – and it shows.

This isn’t my preferred genre of game, but I had plenty of fun playing Runner3 and am confident it will provide a sufficient challenge to fans of the BIT.TRIP franchise and genre.

It’s as fast-paced as it is addictive as it is difficult, and the game is only enhanced by the stunning level designs and visuals throughout. The puns, alliteration and jokes scattered throughout really add to the narrative and style of the game.

Runner3 is a great gateway game for anyone looking to discover rhythm-based games and an excellent addition for any seasoned gamers looking for a new challenge.